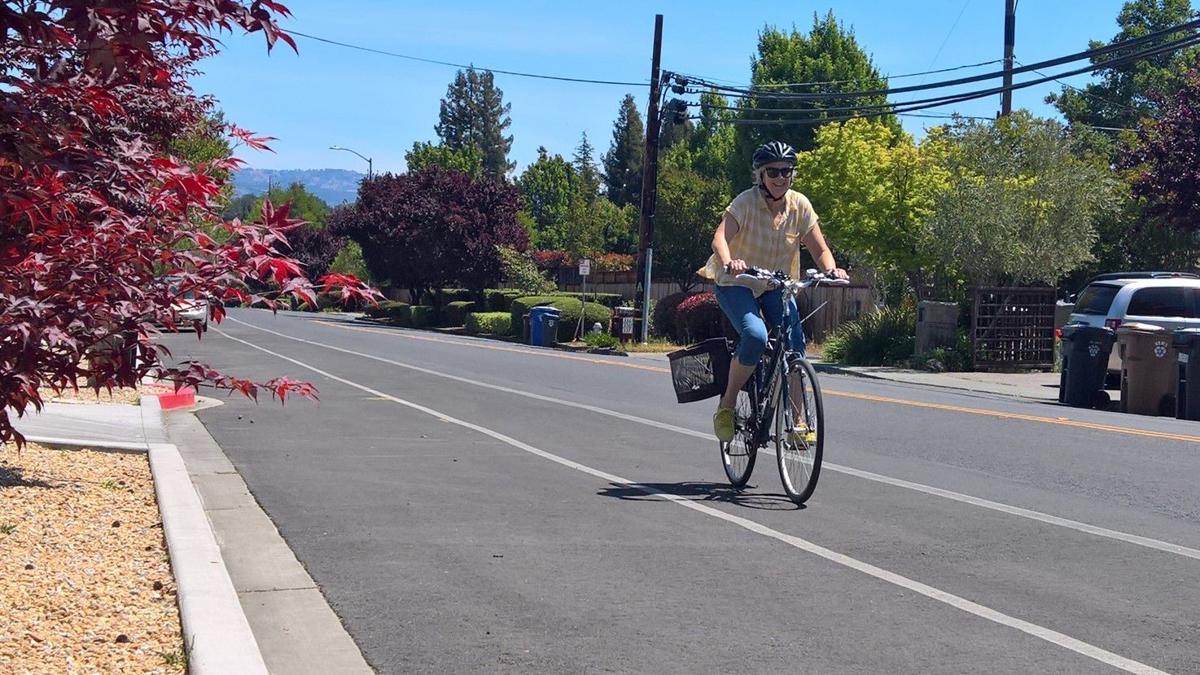 Kate Miller is one of Napa County's Bike Champions for the upcoming Bike to Wherever Day. As executive director of the Napa Valley Transportation Authority, she is also involved with regional bike system planning. 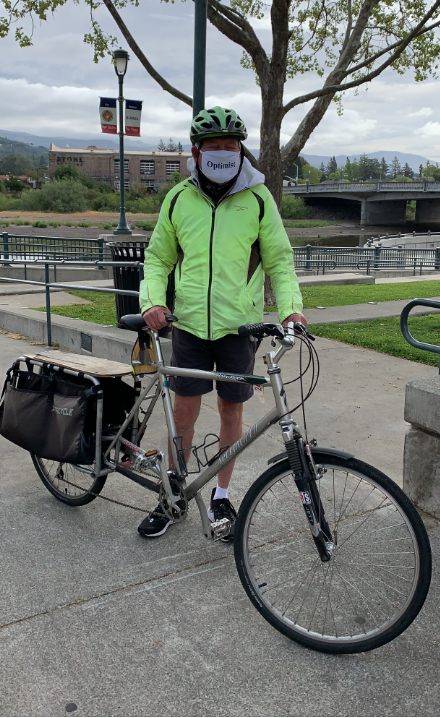 Greg Stueland, a 2021 Napa County Bike Champion, rides his bike from his Browns Valley home to grocery stores, hardware stores and other destinations as an alternative to driving.

Some people walk the talk. Kate Miller and Greg Stueland pedal what they peddle.

What they peddle is the joy of cycling. They were recently named Napa County Bike Champions of the Year by the Napa County Bicycle Coalition.

The Register reached out to both for interviews. Fittingly, both were cycling when they answered their cellphones.

Miller was biking Redwood Road on an errand. She is executive director of the Napa Valley Transportation Authority and is in the thick of the local planning action on roundabouts, Vine buses, Soscol Junction intersection improvements — and regional bike routes.

She often bikes to work and makes the three-mile-long trip into one seven miles or longer by taking roundabout routes. She also rides Napa County’s rural roads, such as the one along Mount Veeder and another toward Lake Berryessa.

The bike champion awards are in conjunction with the May 21 Bike to Wherever Day in the Bay Area. This is a pandemic version of Bike to Work Day designed to encourage people to consider bicycles as an alternative to cars for transportation.

But some aspiring riders might be wary to get started. After all, that Thursday trip Miller was making on Redwood Road? There are no bike lanes there, a fair amount of traffic and parked cars where a door might suddenly fly open.

“I think I would encourage (on-the-fence beginners) to get comfortable on their bike in an environment that’s generally safe, such as the Vine Trail,” Miller said.

The Napa Valley Vine Trail is to someday be a 47-mile biking-and-walking trail from Vallejo to Calistoga. Sections are already built, such as one extending about 12 miles from Kennedy Park through the city of Napa to Yountville.

“It’s amazing, really,” Miller said. “It’s been a huge cultural shift in our thinking of transportation.”

Miller started cycling during the 1980s when she was going to college in Seattle. She decided her car was “more a hindrance than a help,” so she got rid of it.

She biked to a Seattle job in an office and was told to take the freight elevator with her bike. People thought she was one of the messenger delivery people, given they were among the few who biked around the city during that era.

Her career took her back to her native Bay Area, where she worked for the Metropolitan Transportation Commission and Alameda-Contra Costa Transit District. She came to the Napa Valley Transportation Authority in 2012.

Stueland answered his cell phone for a Thursday interview while pedaling near his Brown Valley home.

His first memory of bicycling comes as a 6-year-old and it's not auspicious. He went down the driveway, hit a mud puddle and tipped over.

Stueland’s adult riding career also started with a bit of a hiccup. In 2002 he had moved to Napa County from southeast Michigan. He couldn’t find a local running group, so he fell in with the Eagle Cycling Club.

His first ride — a kind of cycling baptism-by-fire — was going up and down Atlas Peak Road. Beyond the flatlands near Silverado, the road is eight miles of slopes and curves rising to an elevation of about 2,500 feet.

“I made it all up alright,” Stueland said. “But going down scared the hell out of me. I wasn’t sure the brakes would hold.”

He stuck with cycling and learned. He became both a recreational cyclist ready to ride up Mount Veeder and an around-town cyclist heading to the destinations of daily life.

Today, the retiree bikes for all sorts of errands, whether to the grocery store or hardware store. He used a kit to add a long-tail cargo area to a mountain bike, allowing him to put four bags of groceries in the saddle bags.

“Commute biking is at a pace where you can see and feel what’s going on around you,” Stueland said.

He rides so he can stop in one bike's length. When he comes to a stop sign, he doesn’t assume a car driver is looking at him.

“In my experience here, most people do pay attention to a person on a bicycle,” Stueland said.

A novice cyclist might feel intimidated seeing all of those lean veterans in the latest cycling gear speeding by. Stueland encouraged beginners not to compare themselves to others.

“You’re riding for yourself,” he said.

Napa County has 142 miles of bike lanes, paths and routes. The Napa Valley Transportation Authority has a Countywide Bicycle Plan calling for another 459 miles, when money can be found.

Within the city of Napa, the plan calls for 150 projects to expand the city’s 49-mile bike system to 109 miles. Possible projects include a mile-long trail along the west Napa River from Imola Avenue to downtown and a bike lane on Silverado Trail north of Soscol Avenue.

Complicated areas such as Jefferson Street, Redwood Road and Imola Avenue in the city of Napa are designated as study areas.

Whether biking will ever catch on in a big way as an around-town transportation alternative to the auto remains to be seen. If so, Miller and Stueland are among the pioneers.

Go to https://bayareabiketowork.com to learn about Bike to Wherever Day.

Zac Soper paused during his daily, 15-mile bicycle commute from the southern city of Napa to B Cellars winery near Oakville to ponder the Napa…

A reporter gives Napa's Bike to Work Day a try

Bike to Work Day is designed to encourage people who usually drive to ditch their cars and give pedal power a try – and that’s what I did.

Since Napa Valley residents would bike more if routes were safer, a new plan hopes to improve safety.

Kate Miller is one of Napa County's Bike Champions for the upcoming Bike to Wherever Day. As executive director of the Napa Valley Transportation Authority, she is also involved with regional bike system planning.

Greg Stueland, a 2021 Napa County Bike Champion, rides his bike from his Browns Valley home to grocery stores, hardware stores and other destinations as an alternative to driving.