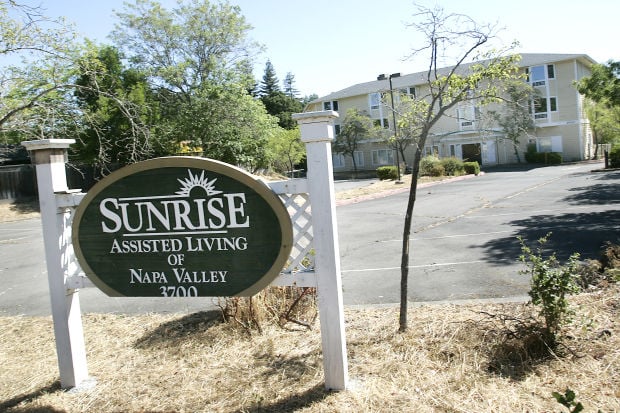 The City Council approved a 57-unit affordable apartment complex at the site of the former Sunrise Assisted Living facility at 3700 Valle Verde Drive in north Napa. 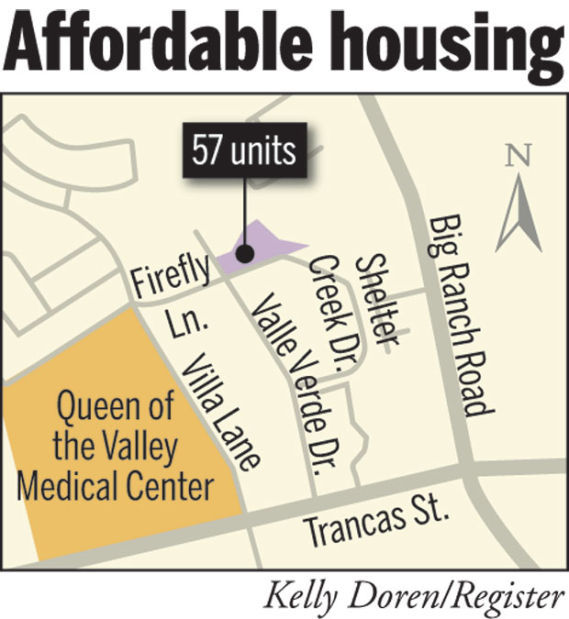 The City Council approved a 57-unit affordable apartment complex at the site of the former Sunrise Assisted Living facility at 3700 Valle Verde Drive in north Napa.

Despite concerns of neighbors and a court ruling, the Napa City Council affirmed a decision it made a year ago to allow the construction of a 57-unit affordable apartment complex in north Napa.

Tuesday, the council again heard arguments for and against Napa Creekside Apartments, which will be a repurposing and expansion of the vacant Sunrise Assisted Living facility at 3700 Valle Verde Drive. As it did last year, the council unanimously approved the project.

“I think Bridge (Housing Corp.) is doing a really creative job here in reusing the existing building that has been vacant for a long time,” Councilman Peter Mott said. “We’ve been looking at that property for years now and talking about different options. ... I think a lot of those options would have been less appealing to neighbors than this option.”

Bridge Housing Corp., of San Francisco and Napa Valley Community Housing plan to develop the site into 57 one-, two- and three-bedroom apartments that will be rented at rates affordable to low-income families.

The Planning Commission and council both signed off on the project last spring, despite neighborhood concerns over increased traffic, parking problems, blight and potential harm to the adjacent Salvador Creek. Following approval, neighbors sued the city, alleging, among other things, the city’s environmental analysis of the site was inadequate.

In April, a Napa County Superior Court judge agreed with neighbors, finding the city’s initial environmental study deficient. The city was ordered to prepare additional information regarding how the project could impact threatened, endangered or protected fish in the creek.

The ruling negated the council’s prior action, so Tuesday, council members reconsidered a proposal that was essentially the same as the project presented last year, with the addition of added environmental analysis that concluded the project would not hurt salmon or steelhead.

Two of the five council members, Scott Sedgley and Alfredo Pedroza, heard the matter for the first time as they were not yet elected at the time of the first hearing.

Sedgley said he was looking at the project “through some fresh eyes” and did not arrive at his decision to support the project easily. He acknowledged neighborhood concerns that children from the complex may make their way past gates and fences to play in the creek, but said he thinks the environmental mitigation is sufficient to protect wildlife.

“If there is a creek nearby, kids are going to play in it. Hopefully they’re respectful,” he said. “I’ve played in about every creek in this town since I was a kid and all those creeks are pretty healthy. I have difficulty believing that an additional 57 units in this neighborhood will damage the Salvador Channel irreparably.”

Mott said it was unfortunate that neighbors have sued over two of the three affordable housing projects recently approved. In both cases, the council affirmed its decision following a lawsuit. The other project, Alexander Crossing on Silverado Trail, is under construction.

“I frankly think this is why we’re starting to see CEQA reform show its head in Sacramento,” Mott said, referring to a bill making its way through the state legislature that would restrict the legal challenges allowed under the California Environmental Quality Act.

Dozens of neighbors opposed to the project showed up and about 10 spoke against it, questioning the city’s finding that it would not significantly impact the creek. They said the neighborhood already has one affordable housing complex, the Silverado Creek Apartments, which is problematic.

“I oppose the project as planned for several reasons, mainly because of its negative impact on Salvador Creek and its fish and wildlife,” said neighbor Bill McGuire. “I’m also afraid it’s going to aggravate the existing parking and traffic problems, it’s going to increase the trespassing problems to the Shelter Creek condominiums and it’s just going to add to the existing litter and graffiti problems I face every day when I walk on the pedestrian paths.”

McGuire said more neighbors would have showed, but they felt approval of the project was a done deal.

“Many of our residents have not showed up tonight, mostly because they thought your approval was a fait accompli and it’s pretty much a waste of our efforts to try to get you to listen to the residents around this proposed project,” he said.

Neighbor Boyd Dennington said he understands the need for community housing and supports it, but said the project should be constructed in a neighborhood that does not already have such a development.

“As a neighborhood, we’ve done our part already, there’s already one complex there,” Dennington told the council. “This kind of feels like double jeopardy. ... Is our neighborhood receiving equitable treatment?”

About as many spoke in favor of the project as spoke against. Supporters praised Napa Valley Community Housing for its management of other sites within the city and stressed the need for affordable housing in Napa.

“It’s probably as green as you can be to reuse a building,” said Eve Kahn, who served on the city’s Housing Element Steering Committee several years ago. “Bridge could have easily come in, tore down and rebuilt but they chose to work within it, to have smaller units and to keep the courtyard, rather than just fill it up.”

Kahn said while neighbors always seem opposed to having apartments built in their back yards, the Napa Creekside Apartments are slated to be built on a site surrounded by condos, apartments, single-family homes and the creek.

“You don’t have a lot of backyards here,” she said. “What you have is this property surrounded by other multi-story, multi-family and attached units. I think it’s well placed, it’s within walking distance of retail, banks, the Queen and all the jobs there. As a community, we have an obligation to house our local workforce of all levels.”

Kathryn Winter, a former Napa County supervisor and past executive director of Fair Housing Napa Valley, stressed the property is not empty and the project is not being built from scratch.

“Thirty-three of these 57 units already exist in a somewhat different form, mostly as an eyesore at the moment,” Winter said, adding that the city’s density standards allow for more apartments to be built on the site than what was approved.

“While I miss the open space, I take joy in observing the thriving families in these new neighborhoods as I walk through them today,” Winter said.

Bridge’s vice president, Brad Wiblin, urged the council to move ahead with the project.

“We’ve been delayed about a year almost by this process,” Wiblin said. “The project, as proposed originally, has not changed. Its come under a lot of scrutiny ... but the project is, in essence, exactly what was here a year ago.”

The city has pledged about $2.03 million from its affordable housing fund, paid by developers, as subsidies to the project, and the county has committed about $2.9 million.

Councilwoman Juliana Inman said she was satisfied with the environmental protection measures that will be taken during construction and set in place thereafter.

“I do not see a fair argument here that there is a potentially significant impact caused by the project,” she said. “I think it’s a well-designed project. They did a good job working with a dated, existing building. By keeping that building and refurbishing and remodeling it, I think they have done the environmentally responsible thing and saved a lot of energy by doing so.”

The original posting incorrectly identified who will manage Napa Creekside. It will be Bridge Housing Corp. Also, the project will be jointly developed by Bridge and Napa Valley Community Housing.

In February 2014, a Napa Superior Court Judge ordered the City to prepare an environmental impact report for the Napa Creekside project, ruling that the City Council failed to consider environmental impacts on Salvador Creek. This ruling means that the City Council violated CEQA- specifically that it dismissed and ignored relevant evidence of impacts- when it reapproved the project in 2013, as reported here. Readers of the Napa Register would not have been aware of this fact, because after publishing this article the Register went silent on the story and ignored this legal setback for the project. The Register has published a number of "puff pieces" promoting the Napa Creekside project, and regularly provides similar promotion for other development projects. If it is going to do this, the paper should also inform its readers about news that might put the project in a unfavorable light.

This issue will be litigated, which just drives up the cost of housing and rents that will be charged

Thank you Napa City We do no need Bums over running the vacant facility.

I am quoted in this article speaking about concerns with the construction of the Napa Creekside Apartments One issue that was not reported (and it might be the most important) is the erosion of the creekbank behind the existing Sunrise Building. When I read Bridge Housing's consultant's response to an email from the California Dept. of Fish and Wildlife, which had expressed the opinion that mitigation measures were less-than-significant, I thought I would investigate the condition of Salvador Creek from within the creek basin. Contrary to the consultant's report, there is little to no "armoring" of the creekbank on the west side. In fact, there are numerous trees which have fallen across the creek and even more with their roots exposed due to the creek eroding the bank. The erosion is within 2' of the fence behind the Sunrise Building. Another 4' of horizontal erosion and the asphalt paving will start to fall into the creek. Rains and flooding will come. Where will the paving go?