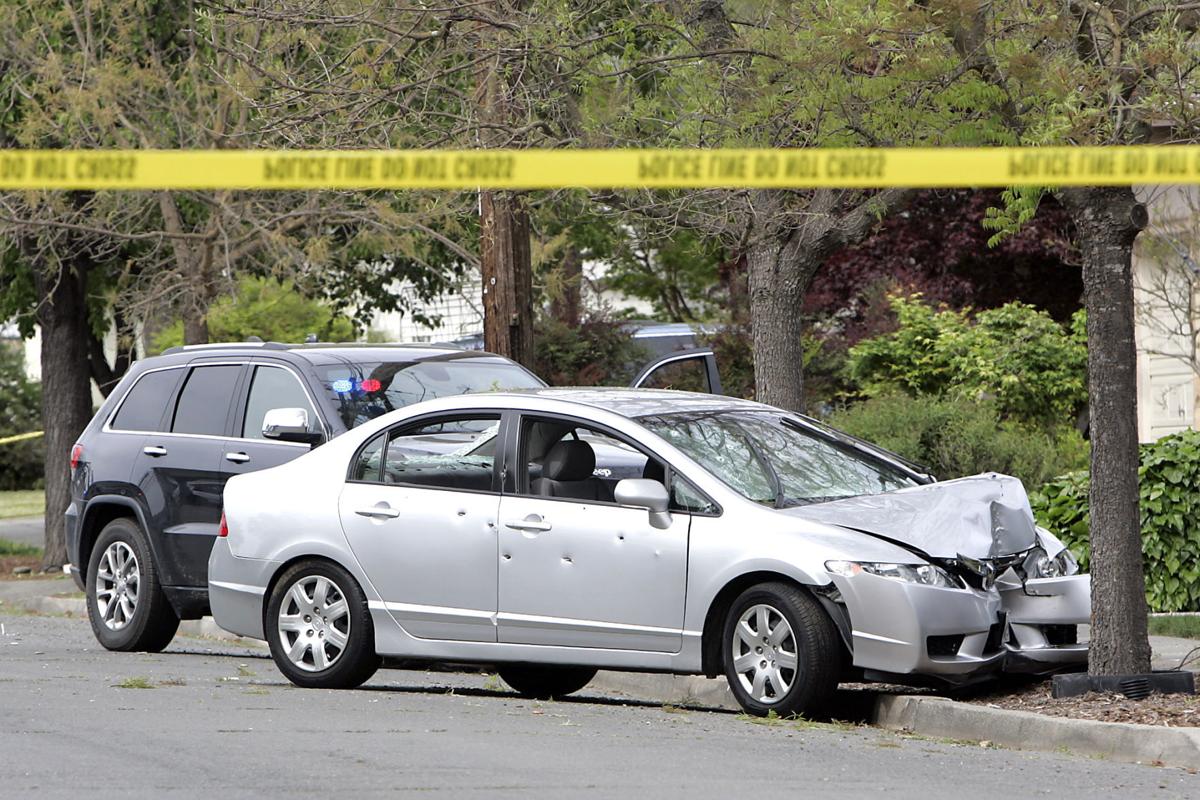 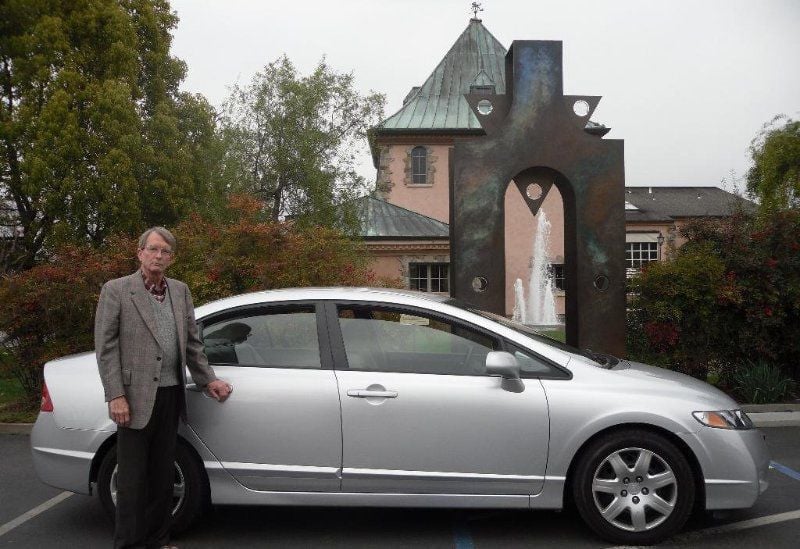 Stephen Ferry poses with a silver Honda Civic in this photo from LinkedIn. He was killed in his silver Honda Civic last April by law enforcement officers who returned his fire. On Friday, the Napa County District Attorney's Office ruled that the shooting was a "reasonable and justified response" and that no charges would be filed against the officer who fired at Ferry. 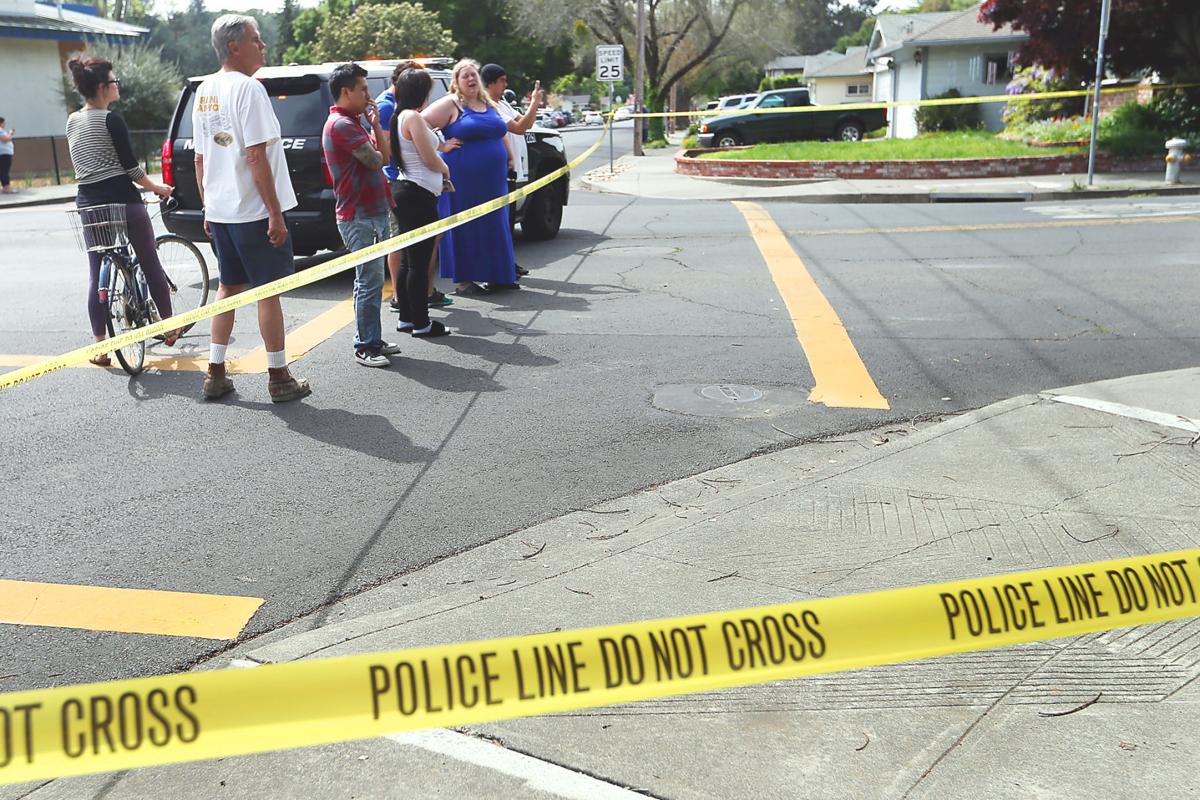 People gather near the scene of an officer-involved shooting near West Park and Linda Vista avenues on April 4, 2017. On Friday, the Napa County District Attorney's Office ruled that the officers were justified in shooting at Stephen Ferry, who died at the scene.

Before law enforcement arrived to the scene on April 4, Ferry, 64, who had worked as a freelance writer and tour guide, threatened to kill several people, attacked a female witness, and, when neighbors intervened, grabbed a pistol from inside his home and began shooting it at his neighbors, according to the DA’s Office.

Eleven Napa Police officers and two Napa County Sheriff’s deputies responded to the scene and set up a perimeter. Then, as he pulled out of his garage, Ferry began shooting from his vehicle and ignoring police commands, the DA’s Office said.

Ferry, who was later determined to be severely intoxicated, shot 2-3 rounds directly at one officer and continued to fire at another, according to the press release.

Officers returned fire on Ferry, who then crashed his vehicle into a tree.

Officers surrounded his vehicle, but instead of putting his hands up, Ferry fired a revolver out the driver’s side window toward surrounding officers, who returned fire, killing him, the DA’s Office said.

Given these circumstances, the DA found that the use of deadly force by law enforcement was a “reasonable and lawful response,” therefore no charges will be filed against them.

No bystanders or officers were hit by bullets, although one officer received a shrapnel wound in the gunfire exchange, authorities reported.

Ferry was described as a loner who had frequent outbursts of anger and yelling and, in the last few years, seemed to be drinking more, according to the DA’s Officer Involved Shooting report. As his mental state seemed to deteriorate, he became more isolated and prejudiced.

In 2015, he started having problems with his new next-door neighbor, who is only identified as “Witness #1” in the DA’s report. Ferry first confronted the new residents regarding things like parking and garbage bin placement. When his new neighbors brought a dog home, Ferry was aggravated by the dog’s barking and whining during the day.

One day in 2016, Ferry is suspected of smearing human feces on a neighbor’s recycling bin after it was left out an extra day. Then he blasted the sound of a screeching cat on a stereo in his backyard, causing Witness #1’s dog to constantly bark.

Between March 26 and April 2, 2017, just days before the shooting, while Witness #1 was away, urine was poured over his patio furniture and liquefied human feces was thrown over the fence connecting his property to Ferry’s, the DA said. The excrement splattered onto Witness #1’s trees, bushes, patio furniture, cushions and patio.

When the neighbor reported the incident to police, Ferry wouldn’t answer the door.

On April 3, the neighbor called the property owner and property manager of Ferry’s residence to report these incidents. A 60-day eviction noticed was posted on Ferry’s door that same day.

The next day, the neighbor heard screaming from Ferry’s residence that he felt was directed at him and called the police. But, again, Ferry didn’t answer the door.

On April 4, Ferry urinated in his neighbor’s driveway.

When Witness #1 came home, Ferry was standing in his own driveway, yelling and screaming racial slurs at his neighbor and Witness #2, a woman associated with Witness #1.

When officers arrived to speak with him, Ferry took out a camera and started to film them. When one of the officers realized that Ferry was not going to comply voluntarily, they returned to his next-door neighbor’s house to discuss legal options. Ferry followed them to his neighbor’s house, interrupted the conversation and was ordered off the property, but remained filming from the sidewalk.

Officers Kistner and Hansen then left the scene, but stopped to take notes while parked nearby on Roberto Street. Almost immediately after they left, Ferry began to yell at and threaten to kill Witness #3, who was headed toward his own car. Witness #2 then took out her cell phone and began recording Ferry, but when he saw her do this, he ran towards her yelling “I’m going to kill you.”

He hit and they both fell onto the street. On her knees, the woman began yelling for help and for someone to call the police, but Ferry kicked her and looked as if he was trying to take her phone, according to the DA’s report.

Four next-door neighbors of Witness # 1 came out to help Witness # 2 and talked with her while she was on the phone with 911 requesting police assistance, the DA said.

Ferry came back out of his house 1-2 minutes later, walking toward the group and holding a revolver. Someone yelled “Gun!” and “Run!” and everyone ran toward the front door of the neighbor’s house – four people dove through the front door while the oldest person hid behind a parked car in the driveway as Ferry began shooting at them.

All available law enforcement were dispatched to the scene with Officers Hansen and Kistner, who were still around the block, responding first.

Six minutes after receiving the first report of shots fired, law enforcement officials had set up a perimeter and were trying to discern what had occurred and if anyone was injured. That’s when Ferry raised his garage door and drove his silver Honda Civic west on Bueno Street.

Instead of stopping at officers’ commands, Ferry drove past the officers, around the patrol car that was parked at the intersection of Bueno and Carlos streets, headed southbound on Carlos and continued around the corner toward Roberto Street.

Sgt. Eddleman pursued Ferry’s car on foot, running south on Carlos Street to the corner of Carlos and Roberto Streets while Sgt. Cole ran back to the corner of Roberto Street and Linda Vista Avenue. Cole could see Officer Cline standing behind his patrol car in the street and both Cole and Eddleman watched as Ferry drove his car closer to Officer Cline at a slow rate of speed, pointed a pistol out the open window of his car and fired multiple shots at close range. They watched as Officer Cline fell to the ground.

Cline had told Ferry to stop, but instead, with the barrel braced on the doorframe of the car, he pointed a revolver at him out of the driver’s side window and shot two to three rounds at Cline from about 3-6 feet away. Cline went to the ground to avoid being hit. A bullet had perforated his pants above the knee.

Ferry continued travelling eastward, pointing his pistol at officers along the way, including Sgt. Cole who took cover behind a tree and returned fire. Seeing Ferry shoot at Cole, Det. Deguilio fired his pistol at Ferry until the magazine was empty, a total of 11 rounds. At the same time, Officer Moore fired four to six rounds at Ferry from 30-40 feet away with an AR-15 type rifle. Ferry drove his car past Deguilio’s SUV and crashed into a tree on the eastside of Linda Vista Avenue, just south of the Roberto Street intersection.

Ferry was slumped over in the driver’s seat while his horn honked incessantly and for about 30 seconds, Ferry appeared to be unconscious or dazed. Then, the DA said, he appeared to straighten up in his seat and start to look for something. Officers commanded Ferry to put his hands up or out of the car window, but he didn’t respond. A minute or more later, Ferry straightened up in his seat, moved his right arm out of the car window and, with a revolver in hand, fired at surrounding law enforcement officers.

A dozen law enforcement officers returned fire on Ferry in a shooting that lasted about 8 seconds. When Ferry slumped over in the driver’s seat, several officers yelled “Cease fire,” approached the car and found Ferry dead.

A Smith & Wesson .357 Magnum revolver containing five expended cartridge cases and one live cartridge was found his lap by his right hand. Two boxes of ammunition and a second revolver were found on the front passenger floorboard of the car. Several bottles of beer were found in the back seat.

Ferry had a blood alcohol content of .31 percent – nearly four times the legal limit – and had recently used marijuana. He died from multiple gunshot wounds to the head, neck and torso.

More than 85 witnesses were interviewed.

The 2300 block of Bueno Street was quiet on Wednesday afternoon, just 24 hours after one of its residents was shot dead by law enforcement. Th…

Napa Police and county sheriff’s deputies traded gunfire with a fleeing suspect Tuesday afternoon on Linda Vista Avenue, killing the man in a …

Stephen Ferry poses with a silver Honda Civic in this photo from LinkedIn. He was killed in his silver Honda Civic last April by law enforcement officers who returned his fire. On Friday, the Napa County District Attorney's Office ruled that the shooting was a "reasonable and justified response" and that no charges would be filed against the officer who fired at Ferry.

People gather near the scene of an officer-involved shooting near West Park and Linda Vista avenues on April 4, 2017. On Friday, the Napa County District Attorney's Office ruled that the officers were justified in shooting at Stephen Ferry, who died at the scene.