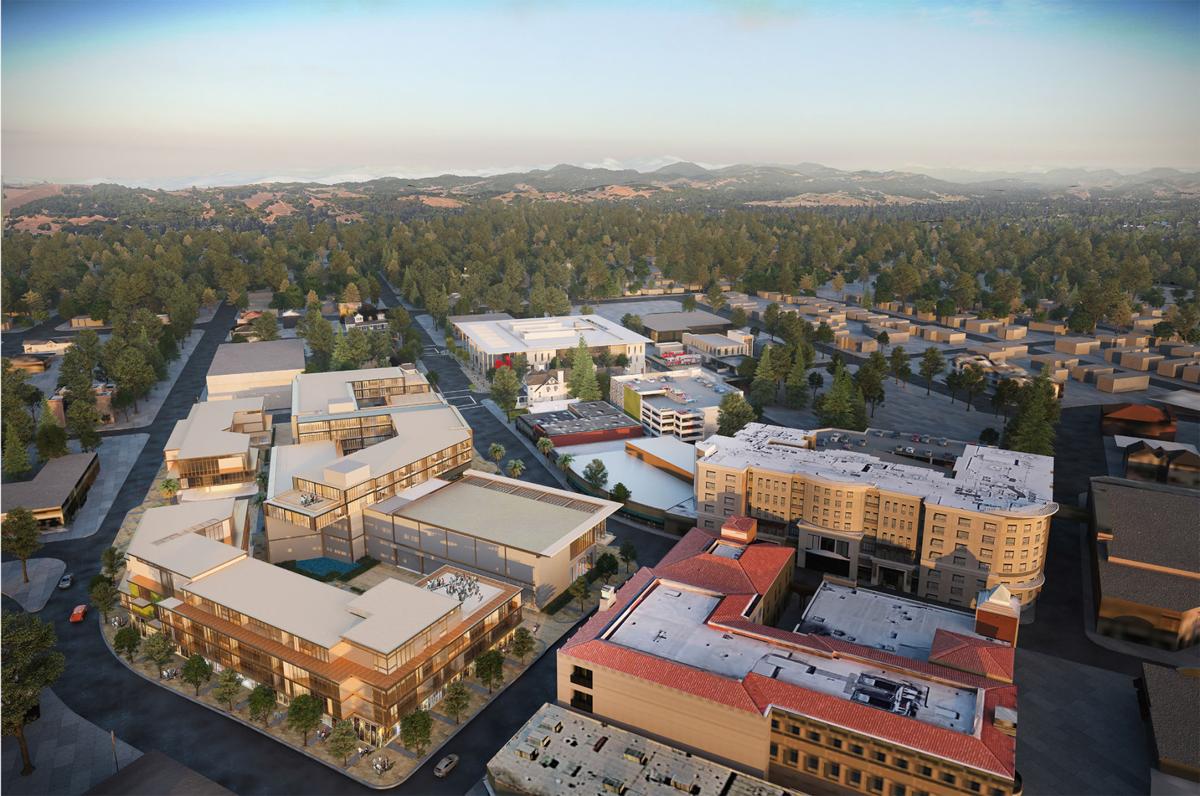 At left in this artist’s rendering is a complex of hotel rooms, housing, restaurants and shops that will replace Napa’s existing City Hall and police department block between First and Second streets. Under the proposal designed by the Plenary Group and approved by the city in June, Napa will build its new, four-story city office (top center) a block west on First Street, replacing the Community Services Building. 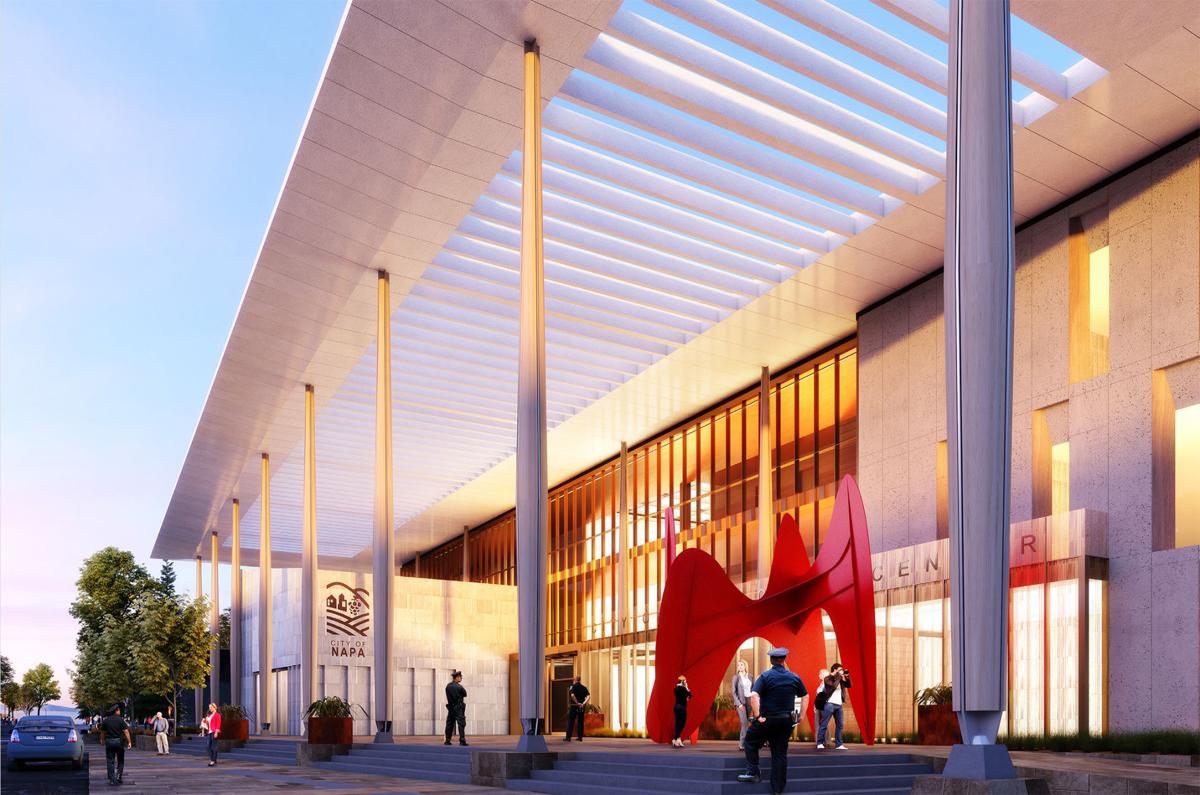 The Plenary Group has proposed a new Napa City Hall on downtown First Street to replace the current city administration building, which dates to 1951. The civic center also would house the Napa Police Department.

The clock is now ticking on Napa’s campaign for a new City Hall building – and the housing, hotel rooms and shops that will replace the city’s current hub.

On Tuesday, the City Council approved negotiations with the Los Angeles-based Plenary Group to design and build a four-story First Street building to house the city’s offices and police department. The agreement gives Napa and Plenary up to two years to plan out the new City Hall, launch commercial developments on the old City Hall block on Second Street, and arrange temporary work space for city departments during construction of both.

Plenary will have exclusive rights to bargain with the city for up to two years on a contract to design and build Napa’s new civic center, which will replace the Community Services Building at 1600 First St., then operate and maintain it for 30 years.

The 130,193-square-foot building would house departments that currently are scattered across seven sites due to inadequate room at the 66-year-old City Hall, costing about $300,000 a year in rent.

Napa also would replace its Fire Station No. 1 downtown with a 13,167-square-foot building at 1115 Seminary St., currently home to the city Housing Authority. To serve visitors at the city facilities, the agreement with Plenary calls for expanding the Clay Street garage westward and adding space for 271 more cars.

Replacing the existing City Hall and police station on Second Street will be a mixed-use complex with a hotel containing between 225 and 275 rooms and suites, as well as 90 to 110 condominium units and some 40,000 square feet of retail space. Plenary also agreed to build 10 affordable housing units elsewhere in Napa.

The development is considered the financial key to the project, as its tax revenue is expected to help cover the cost of construction bonds on the new city buildings.

Because Napa and Plenary seek to build the new City Hall and hotel-housing block at the same time, the partners still must arrange transitional space for city staff, officials said. With local office space in short supply, Vice Mayor Juliana Inman floated the idea of taking over Napa County’s vacant Health and Human Services Agency campus on Old Sonoma Road, where the county eventually hopes to redevelop for housing.

Because of its special security needs, Napa Police may operate from a temporary, 25,000-square-foot building at the city corporation yard until the new City Hall is ready, according to Jacques LaRochelle, public works director.

City departments are expected to leave their current quarters in late 2018, before construction begins, and occupy temporary offices for 24 to 30 months.

Napa will likely host the first of several public forums on its City Hall and downtown development by year’s end, said LaRochelle, who called regular updates to residents a key to winning public support.

“This is the most significant public project we will deal with in years, if not ever,” he told the council. “So public engagement is key; we want to make sure throughout that people are heard.”

“The more information we have, the better,” said Councilwoman Doris Gentry. “We’re answering questions on the street already about why we have to do this.”

Plenary began working with Napa after the council voted in May to support its plan to keep the city’s main building in downtown. The decision thwarted a competing proposal that would have created a new city hall and police headquarters a mile east on Soscol Avenue, allowing city departments to operate from their current offices until the completion of the new buildings.

Documents released by Plenary estimate the cost of the City Hall replacement at $110.2 million, including construction, financing and transitional office space. The agreement with Napa calls for setting a final price when the design is 50 percent complete.

Tuesday: Start of two-year negotiation window with the Plenary Group

First quarter of 2019: completion of financing

Napa’s city government has done business from the heart of town for a century and a half. If its leaders – and a development team – have their…

The next member of the Napa City Council will be an old hand at the job. Tuesday night, its members will decide who that old hand will be.

Napa leaders get a closer look at the next City Hall

The future home of Napa’s city government may be an edifice on downtown First Street in metal, glass, wood and concrete, with two halves set a…

Designers of Napa’s future downtown civic center continue to refine the building that will house city government and police for decades to come.

At left in this artist’s rendering is a complex of hotel rooms, housing, restaurants and shops that will replace Napa’s existing City Hall and police department block between First and Second streets. Under the proposal designed by the Plenary Group and approved by the city in June, Napa will build its new, four-story city office (top center) a block west on First Street, replacing the Community Services Building.

The Plenary Group has proposed a new Napa City Hall on downtown First Street to replace the current city administration building, which dates to 1951. The civic center also would house the Napa Police Department.