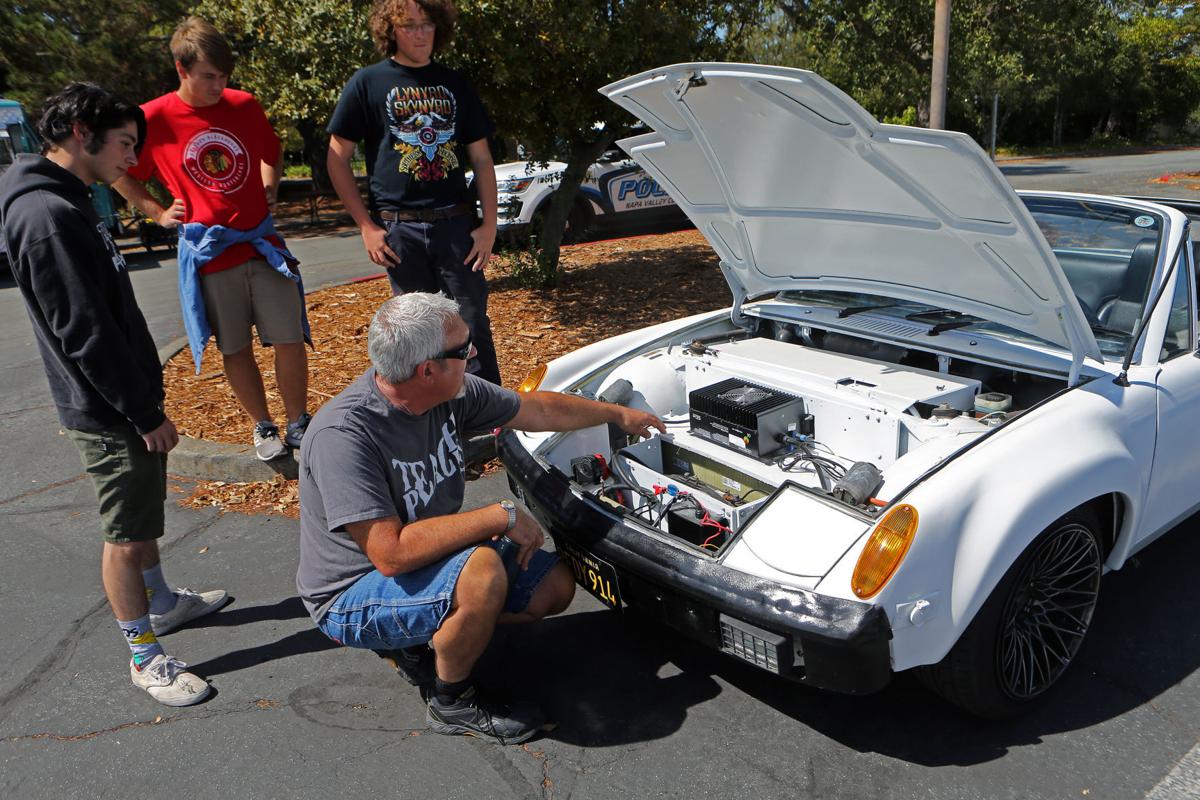 Stephen Federico points out the electric powertrain at the heart of a conversion of his Porsche 914, which was built in 1973 with a conventional, gasoline-fueled four-cylinder engine. The sports car was one of two dozen vehicles, both fully electric and plug-in hybrid, that were displayed at Sunday's Drive Electric gathering in south Napa. 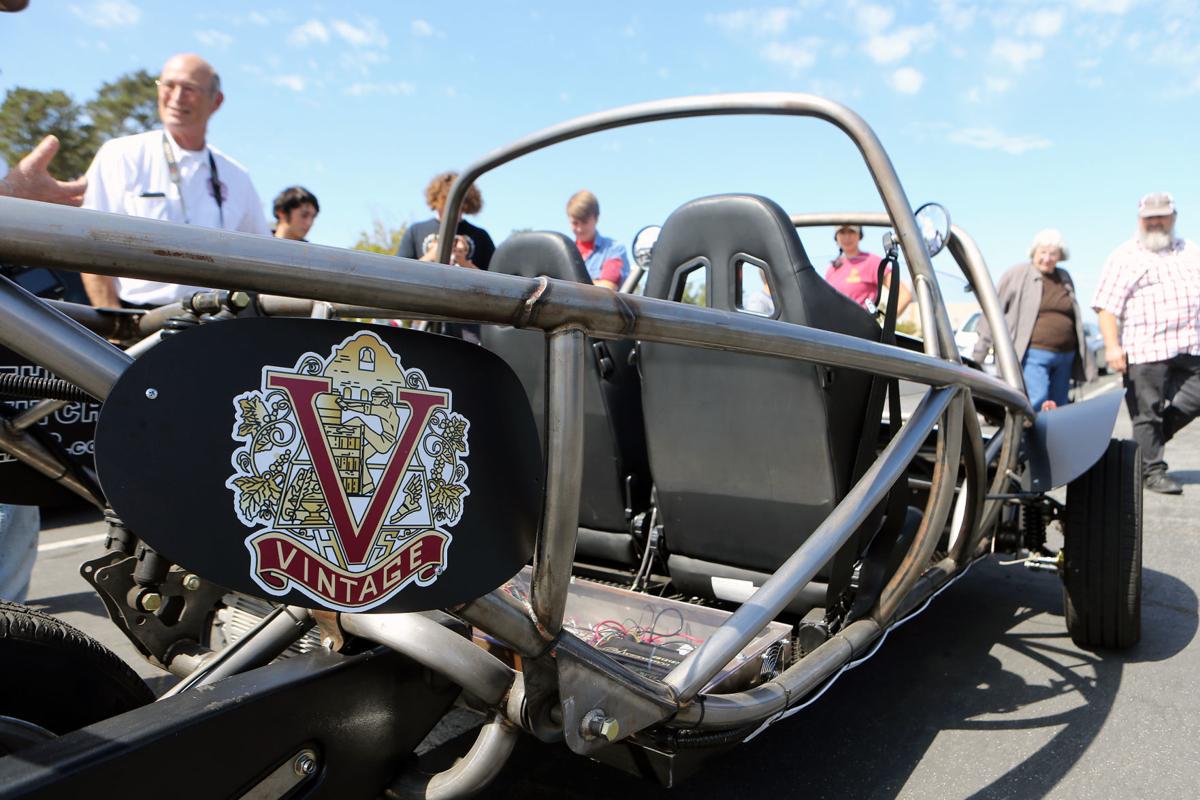 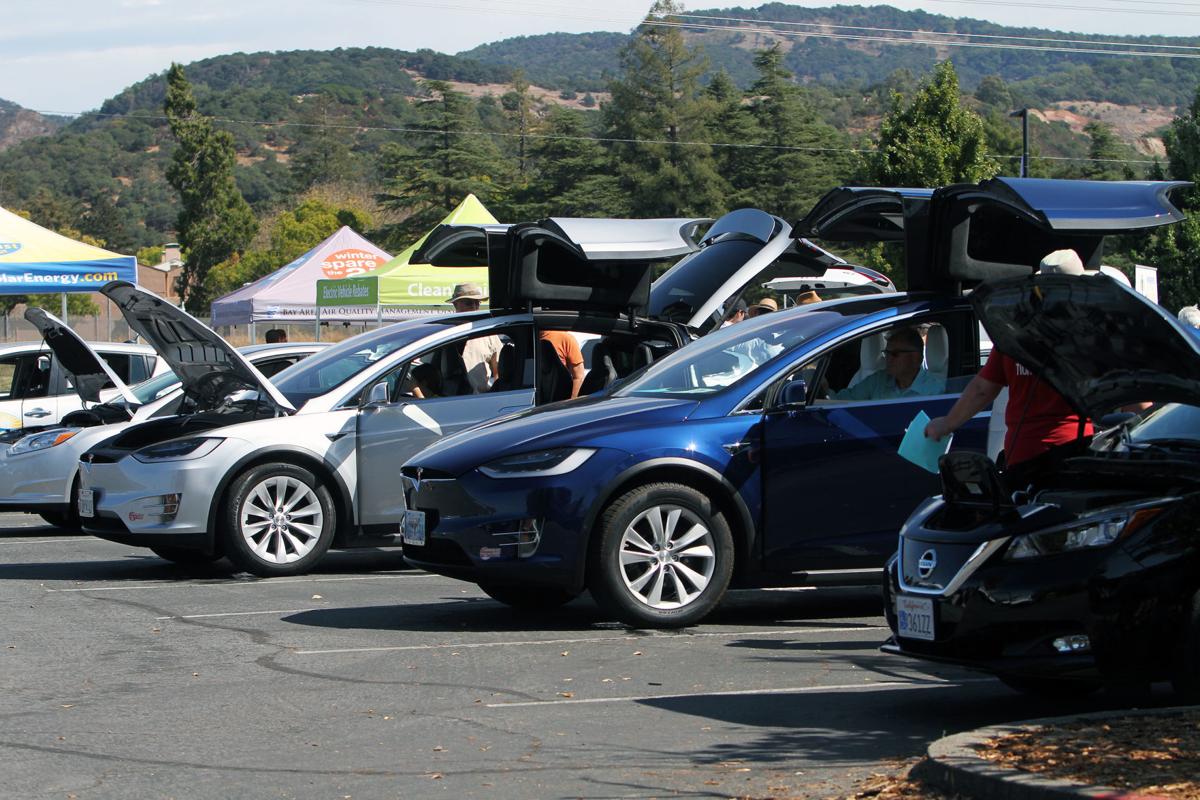 Teslas accounted for many of more than two dozen vehicles displayed Sunday afternoon at Napa Valley College during Napa's Drive Electric event, an annual exhibition to promote greater use of fully electric and plug-in hybrid vehicles.

A visitor to an auto show devoted to electric vehicles can expect to see multiple versions of Teslas, Chevrolet Bolts and other models that have made gasoline-free driving well known. What might have captured more attention at Napa’s Drive Electric, however, were more offbeat entries that showed off not only environmental commitment but the playful touch of a tinkerer.

Amid more than two dozen sleekly modern sedans, coupes and minivans at Napa’s second annual electric-car gathering were a handful of much more quirky displays – including a 1970s sports car packed with batteries and an electric three-wheeler largely assembled by high school science students. Such entries added an unexpectedly homespun touch to what otherwise was a collection of some of the most advanced technology on the road.

At first glance, Stephen Federico’s four-wheel companion at Drive Electric seemed an unremarkable if well-maintained old-time coupe – a 1973 Porsche 914 at least four decades older than any other vehicle on the Napa Valley College lot. But he popped its front hood to reveal a bank of lithium-ion batteries, which were hooked into an electric powertrain the car’s previous owner had substituted for its stock four-cylinder engine.

Though the white-bodied Porsche already had been turned electric before Federico acquired it for his 50th birthday in 2015, “it was what we call a basket case,” the Valley Oaks High School teacher recalled in between chatting up curious onlookers Sunday afternoon.

“Luckily for me, lithium-ion batteries are plentiful, so I was able to install them and do some new wiring.”

While high efficiency and the absence of carbon emissions form the case for most designed-from-scratch electric cars, Federico’s inspiration came instead from the racetrack, where had he watched battery-driven go-karts speed along with massive amounts of torque belying their small size. With that image in mind, the notion of using cutting-edge power to renew a lightweight car from the past became irresistible to him.

“It’s pretty phenomenal now,” he said of the resulting old-new hybrid, which incorporates the batteries of two wrecked Chevrolet Volts. “It’s a very stiff car – if you hit a bump you feel it – but on a smooth and winding road it’s pretty incredible.”

Across the NVC parking lot about a dozen Teslas away was the most experimental-looking of Drive Electric’s showcase cars – no surprise, for its creation was the result of months of experimentation last year at Vintage High School.

Looking more like a skeletal dune buggy than a conventional car, the three-wheel Switch – its frame composed of welded steel tubes without body panels – left little of its motor, batteries or other innards hidden from view. Inside its frame were modules and a wiring harness to control an array of electronic features that belied its stripped-down appearance, all of them installed and tested by more than 20 teenage students in Tom Dougherty’s Vintage Automotive Technology class.

“We’ve worked on aerodynamics, collision avoidance, traction control, anti-lock brakes,” said Dougherty, who flocked around the Switch with a half-dozen of his students. “We’ll build another one of these this year; this one we’ll keep as a test bed for new features.”

Despite Vintage students’ occasional misadventures like receiving a wrong set of instructions included with the chassis parts, “I learned about EVs as a whole, and I became fascinated with the whole electric car thing,” said Reece Imrie, a junior in the class.

“For beginner students, it just shows you can build something,” added Dougherty. “And for the advanced students, it shows that you can dream up new stuff and build that also.”

The largest electric vehicle on display in Napa was unlikely to be driven by any show visitors, however wealthy – yet it too drew its share of the curious. Off to one side of the Drive Electric area, guests walked through a white, battery-powered 30-foot BYD bus, one of seven the Napa Valley Transportation Authority plans to press into service for its VINE transportation system over the next 18 months.

“People want to know when these are coming, how many people can fit, if the routes are changing based on (battery) charging,” said NVTA spokesperson Christina Lee of the electric bus, which holds 22 passengers and runs nearly 200 miles per charge. “It doesn’t surprise me at all; it’s an environmental concern, especially in the Napa Valley, with any emissions that could affect our vines.”

The organizer of Napa’s Drive Electric gathering, Gopal Shanker, sought to keep visitors’ attention not only on the high-tech cars on display, but also on a broader view of reducing emissions – partly by including information booths at the event for solar panel firms and Marin Clean Energy.

“The model we hope to bring to people is not just to buy an electric vehicle, but to also have solar panels or MCE (service), so you have a system in which the power for the EV is also clean,” said Shanker, president of the renewable energy firm Recolte Energy.

Sunday’s exhibition took place on the final day of National Drive Electric Week, a slate of vehicle shows and informational events promoting the use of fully electric and plug-in hybrid vehicles.

More than 25 vehicles formed the showpiece of an automotive fair Sunday afternoon in Napa – but this was a celebration of freedom from the gas pump.

Brown’s Auto Parts has been around since 1946 and just like the classic cars of that era, it’s taken on a certain mystique – an enduring remin…

Stephen Federico points out the electric powertrain at the heart of a conversion of his Porsche 914, which was built in 1973 with a conventional, gasoline-fueled four-cylinder engine. The sports car was one of two dozen vehicles, both fully electric and plug-in hybrid, that were displayed at Sunday's Drive Electric gathering in south Napa.

Teslas accounted for many of more than two dozen vehicles displayed Sunday afternoon at Napa Valley College during Napa's Drive Electric event, an annual exhibition to promote greater use of fully electric and plug-in hybrid vehicles.