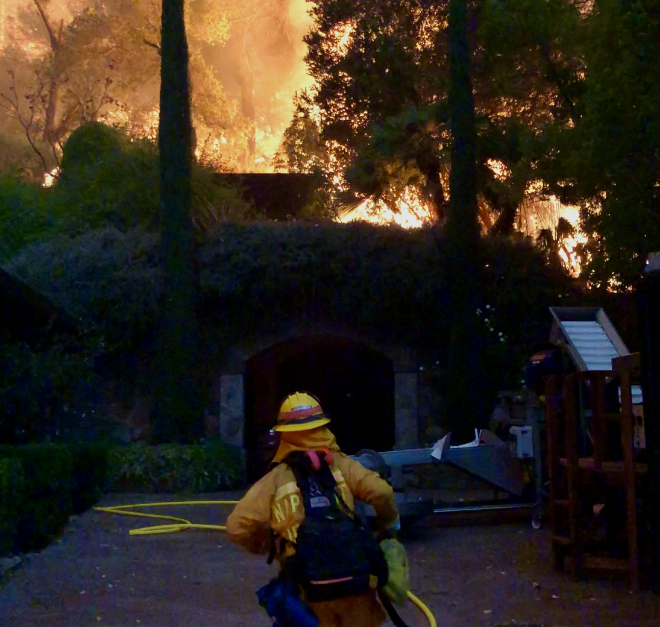 A firefighter works on Sept. 27 to save the Boeschen Vineyards property along Silverado Trail near St. Helena. 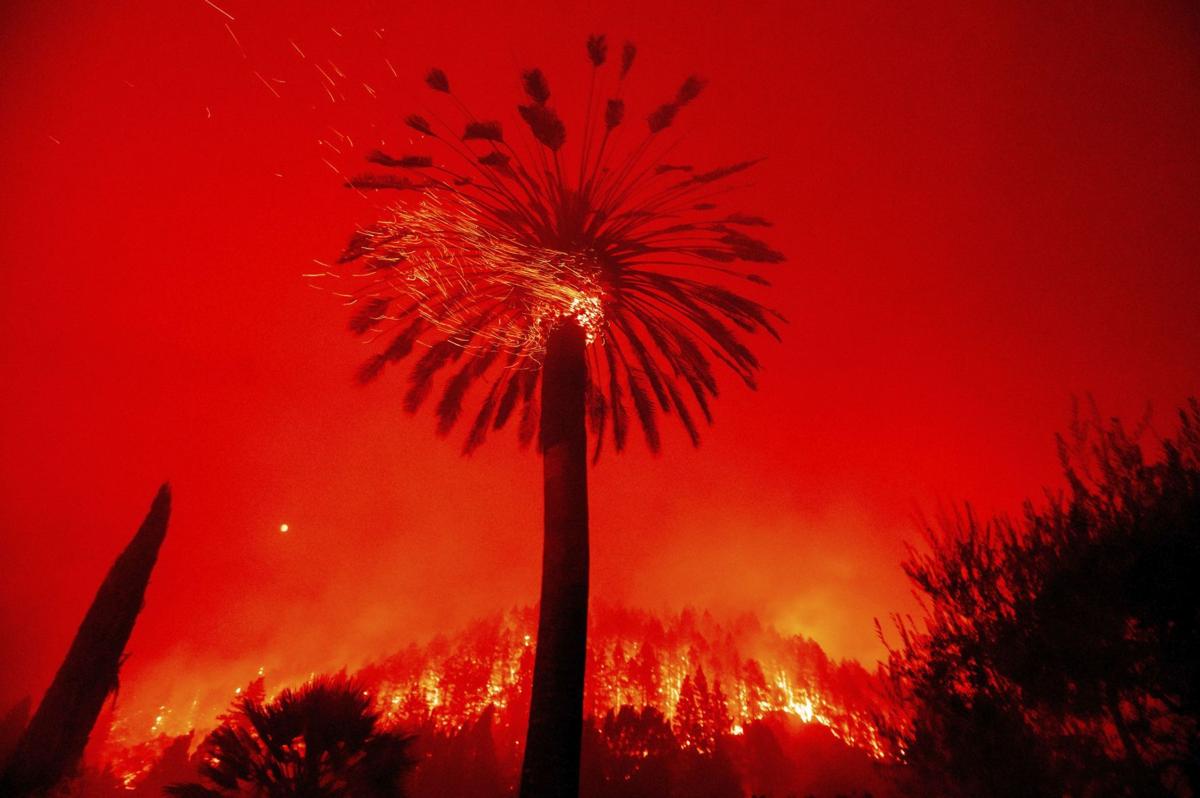 Embers fly from a tree as the Glass Fire burns in St. Helena, Sunday, Sept. 27. The Boeschens recognized this as being at their Boeschen Vineyards. 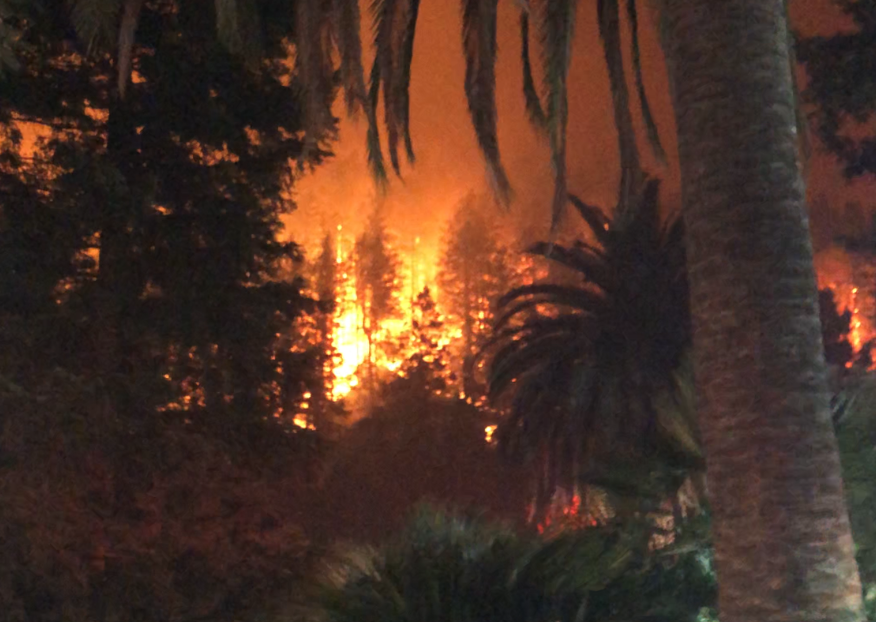 The scene at Boeschen Vineyards on Sept. 27 as the Glass Fire burned around the property. Three city of Napa firefighters saved the structures there.

Three City of Napa firefighters with a fire engine carrying 500 gallons of water proved able to hold off a newly born Glass Fire and save Boeschen Vineyards.

It took them several hours of hard, sweaty work that first night of the fire on Sept. 27. But, amid the tales of Glass Fire tragedy, they created one with a happy ending. The family winery, with its 11-acre vineyard and 1890 home along Silverado Trail, still stands.

“It seems like a miracle to us, considering the Armageddon that surrounds us on all sides,” Doug Boeschen said recently.

He and firefighter Matthew Colburn made contact after the firefight. Colburn shared a video of a firefighter running across the crush pad in the direction of flames.

“It was a classic ‘heroes-run-toward-the-trouble’ kind of video,” Boeschen said.

Colburn, Capt. Ty Becerra and firefighter Tyler Dombrowski were on a fire engine that responded to the Glass Fire after it broke out in the mountains east of St. Helena. They spent the day chasing the fire and then realized Boeschen Vineyards was in an area about to burn.

“It was just our engine,” Colburn said. “We drove back there and we noticed this entire property was about to be entirely overwhelmed.”

They couldn’t put the fire out. Rather, they had to try to redirect it, he said.

The 500 gallons of water in the engine wouldn’t last. Help from a water tender and strike teams wasn’t on the way, given other firefighters were busy with the fire elsewhere.

Colburn rigged up a garden hose to connect the vineyard irrigation system to the engine’s tank. During periods the firefighters waited for the engine tank to refill, they used chain saws and hand tools to cut back brush.

At another point, Colburn heard the whistling sound of a propane tank bleeding off pressure. Then it exploded like a bomb.

“When that blew, you felt it in your chest,” he said.

The main front of the fire passed through. Colburn said spots still smoldered, but firefighters reached the point to where they believed flames wouldn’t again erupt.

Finally, just after midnight, the three firefighters left Boeschen Vineyards to fight the Glass Fire elsewhere. They checked back at 3 a.m. to make certain everything was still standing and it was.

Colburn talked about the unwanted scenario of successfully fighting a fire for five or six hours to save a property, only to later find fire subsequently destroyed it.

“We take that personally,” Colburn said. “We feel like if we only worked harder, if only we did something different, if only we saw something.”

Then there are cases like Boeschen Vineyards, when the property is saved and stays saved. Colburn said that’s when firefighters amid chaos and destruction make an immediate impact on people’s lives.

An Associated Press photo of embers flying from a flaming palm tree received national attention. The Boeschens saw it and recognized the palm tree as being their own.

“I don’t think it will survive,” Boeschen said of the tree.

But all the structures on the property are undamaged. Lots of vines got toasted, but should survive, he said.

Boeschen Vineyards ended up a survivor along this section of Silverado Trail. The nearest winery to the north, Chateau Boswell, was destroyed. To the south, the Black Rock Inn was destroyed.

Napa Valley's harvest and busiest time of year are late summer and early fall. What happens when they run up against a pronounced fire season?

Cal Fire now has an estimate for when the fire will be fully contained.

Watch Now: A journey upvalley during the Glass Fire

Reporter Barry Eberling took a drive upvalley on Tuesday to survey the damage and the ongoing firefight amid the Glass Fire.

Cal Fire has begun reducing the forces assembled to fight the wildfire.

Containment advances on the Glass Fire in Napa County as forecasts point to local temperatures returning to the 90s starting Tuesday.

The Boys & Girls Clubs of St. Helena and Calistoga are currently helping 15 families and BGC staff who lost their homes in the Glass Fire.

Star editorial: The heroes of the Glass Fire

First responders, volunteers and public officials all did their part to save St. Helena.

A firefighter works on Sept. 27 to save the Boeschen Vineyards property along Silverado Trail near St. Helena.

Embers fly from a tree as the Glass Fire burns in St. Helena, Sunday, Sept. 27. The Boeschens recognized this as being at their Boeschen Vineyards.

The scene at Boeschen Vineyards on Sept. 27 as the Glass Fire burned around the property. Three city of Napa firefighters saved the structures there.