This pair of artist renderings depicts what the intersection of Jefferson and H streets in Napa could look like with a combination of mixed residential-commercial buildings, wider sidewalks, tree plantings and other improvements, under a recommendation to overhaul major avenues as part of the city's proposed general plan to guide development for the next two decades. 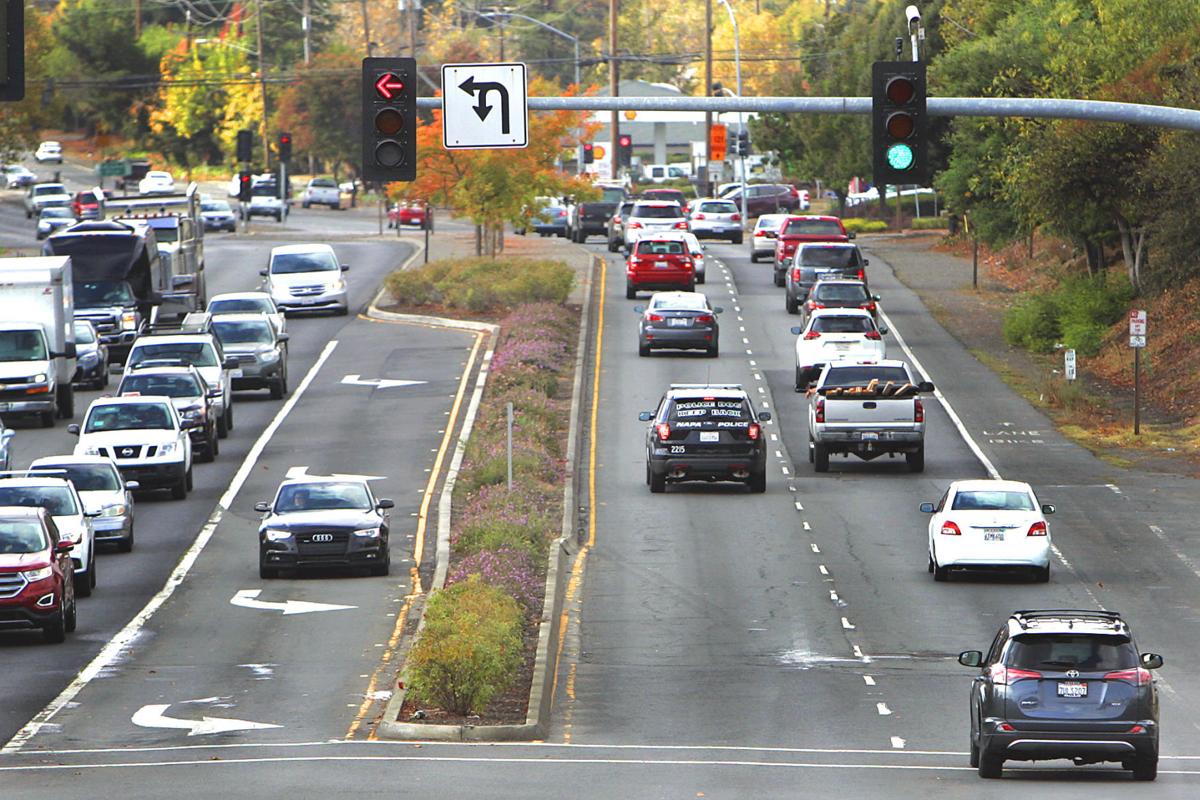 Drafts of a new city general plan for Napa, which is to guide land use and zoning through 2040, have identified Imola Avenue as one of the major traffic corridors where the city can encourage more residential construction.

Napa’s next general plan could open the way to a new look for the city’s major avenues that eventually would include wider sidewalks, easier bicycling, and more housing blended with local businesses.

The Planning Commission last week reviewed elements of Napa’s new land-use playbook intended to enliven primary routes like Jefferson Street and Lincoln, Soscol, and Imola avenues while inviting more residential development to cut into a chronic housing shortage in the city. An emphasis was placed on mixing residential and business uses on such key routes — as well as including wider sidewalks, safer bicycle corridors, and other steps to encourage more residents to live close to their work.

The recommendations — partly based on more than a year of debate by a 15-person advisory group helping to develop the general plan — identify “focus areas” for rethinking land uses and street design. Strategies would include adding shade trees, placing more businesses directly on the street, and shifting parking spaces behind buildings or into garages where possible.

In addition, major corridors would be zoned to allow new buildings up to three stories high, and as many as five floors along Soscol Avenue and four floors on Jefferson Street. Blended-use construction would be encouraged, with housing placed above ground-level shops and restaurants to create more active street life and shorter commutes.

The proposal also appears to work around well-established business uses in various Napa neighborhoods, including Soscol’s auto showroom corridor and shopping centers and the medical offices clustered on Trancas. Soscol would receive a boulevard-style makeover with trees, wide sidewalks, separate bike lanes to increase the “sense of arrival” for those arriving in Napa from the south, according to plan documents.

Southwest Napa residents are calling for the same development limits already contemplated for two other neighborhoods on the city's western edge.

Other upgrades include increased access to both banks of the Napa River north of downtown, including the filling of gaps in the Napa River Trail, and extending restaurant and hotel land uses northward along the waterfront from the city core.

Such changes appeared to draw broad support from commissioners, although Paul Kelley and others cautioned against creating new zoning so deep to the west of Jefferson Street as to extend into neighborhoods filled with older homes dating as far back as the 1890s.

The draft plan also includes a rezoning to permit multifamily housing along Big Ranch Road at the city’s northern edge. Despite opposition from two neighborhood residents who called the addition of townhouses and denser housing incompatible with Big Ranch’s country-like setting, Commissioner Ricky Hurtado was open to the idea — while predicting any changes would be gradual and dependent on reversing a housing crunch that has priced out many working-class would-be residents.

Napa lays out land-use designations for its future development playbook, as some residents seek to block large-scale growth near the city limits.

“I don’t think it’ll happen right away,” he said. “I want to give us the flexibility of allowing medium-density while keeping in mind the gateway and the surrounding neighborhoods. Yes, our families are leaving, but I see this as an opportunity for farmworkers, school admins, and firefighters.”

The discussion followed another Planning Commission hearing four days earlier about the possible creation of greenbelts to curb the development of Napa’s open spaces on its western border, including the Timberhill Park area of Browns Valley and the hills above Old Sonoma Road where the Napa Oaks housing subdivision was twice blocked by the City Council. Residents of the Foster Road corridor in the southwest also have pushed for the greenbelt protection, which would cap housing construction at one home per 20 acres.

Another forum on the general plan will be hosted by the City Council and likely take place in April, the city has announced. A final version of the plan is not expected to reach a council vote before the first quarter of 2022 at the earliest.

WATCH NOW: HOW A PAINTING CLASS HELPED NAPA SENIORS GET THROUGH THE PANDEMIC

PHOTOS: LOW-INCOME HOUSING ON THE RISE IN NAPA

Photos: Low income housing on the rise in Napa

The changing shade of the Statue of Liberty

The changing shade of the Statue of Liberty

Take a walk through Napa's Oxbow Public Market. Located in downtown Napa, the market features a wide variety of merchants and vendors.

The downtown PBID committee put up the funds to beautify some of Napa's major thoroughfares.

Marine Corps Private Heisch earned the honor in while deployed to suppress China's Boxer Rebellion in 1900.

“’Low income’ is a higher income than some would expect” in Napa, said the city's housing manager about a still-costly housing market.

This pair of artist renderings depicts what the intersection of Jefferson and H streets in Napa could look like with a combination of mixed residential-commercial buildings, wider sidewalks, tree plantings and other improvements, under a recommendation to overhaul major avenues as part of the city's proposed general plan to guide development for the next two decades.

Drafts of a new city general plan for Napa, which is to guide land use and zoning through 2040, have identified Imola Avenue as one of the major traffic corridors where the city can encourage more residential construction.