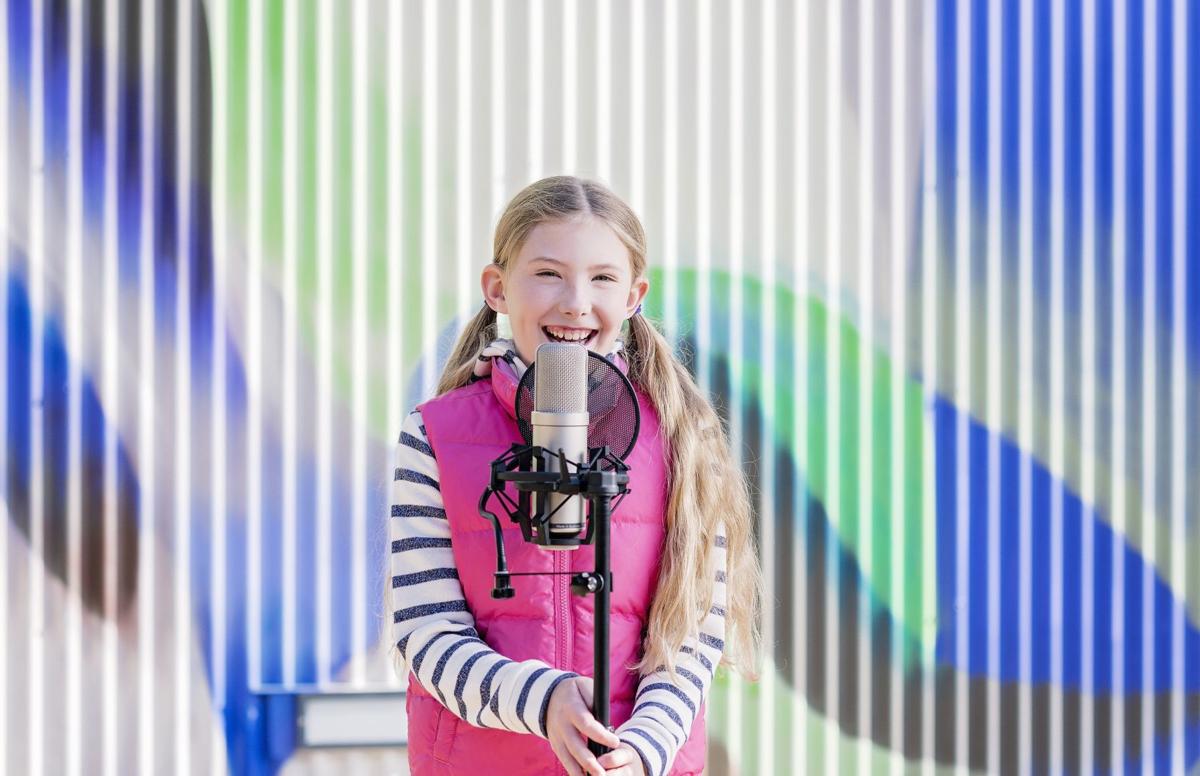 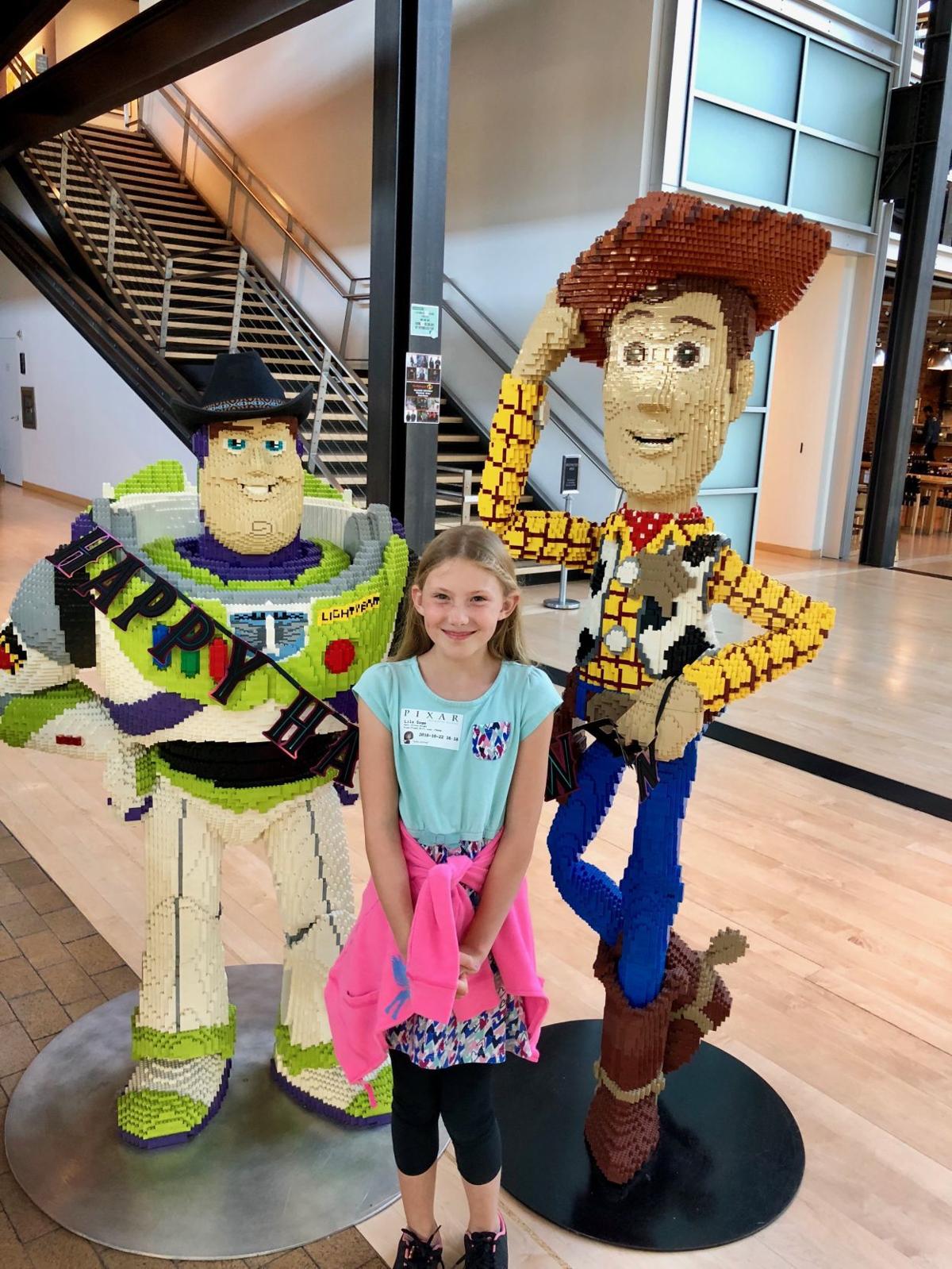 Lila Sage Bromley, a Napa voice actor, visited Pixar to record her role in the film “Toy Story 4.”  Here, she poses with Toy Story characters made from Legos. 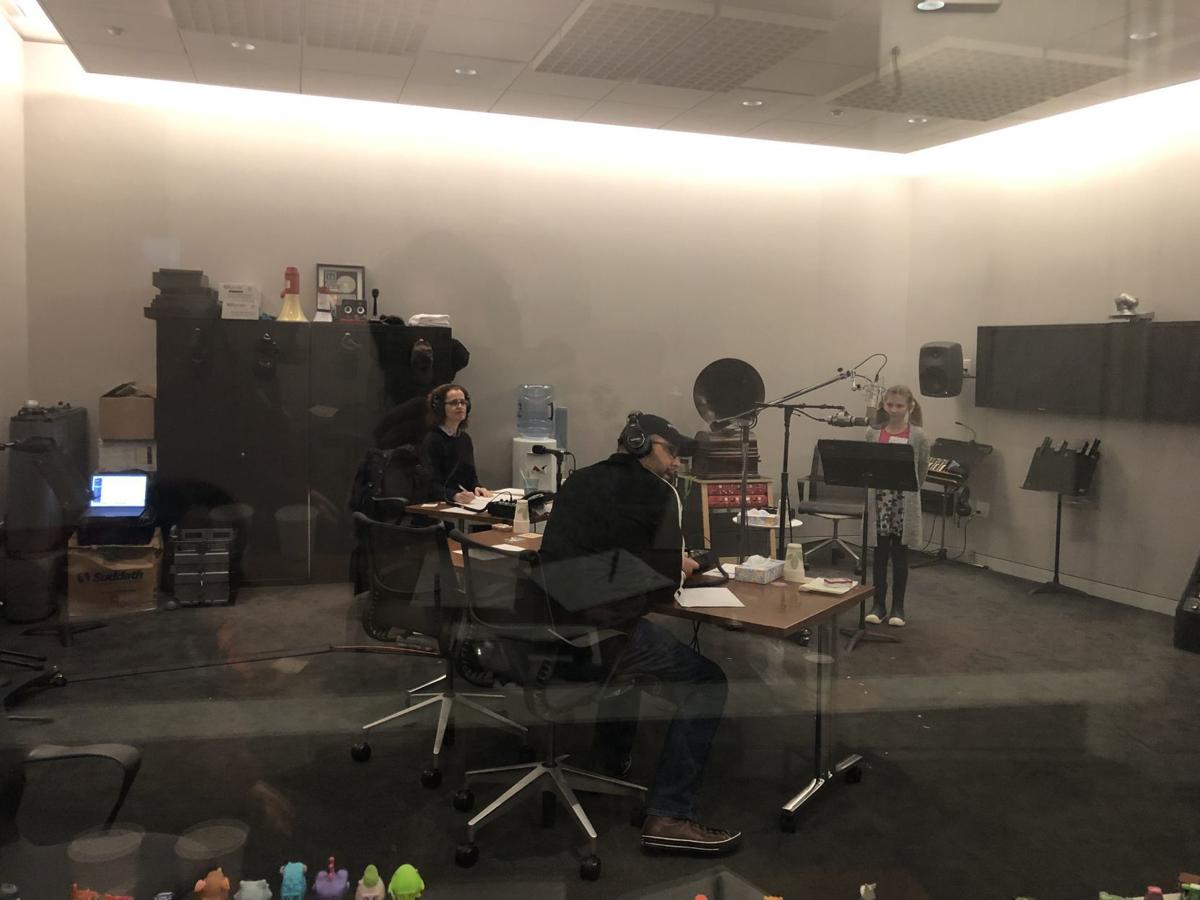 Lila Sage Bromley, a Napa voice actor, is shown here at Pixar Animation Studios in Emeryville as she recorded her role in the film “Toy Story 4.”  Josh Cooley, the film’s director, is in the middle of this photo wearing a hat.

Lila Sage Bromley, a Napa voice actor, visited Pixar to record her role in the film “Toy Story 4.”  Here, she poses with Toy Story characters made from Legos.

Lila Sage Bromley, a Napa voice actor, is shown here at Pixar Animation Studios in Emeryville as she recorded her role in the film “Toy Story 4.”  Josh Cooley, the film’s director, is in the middle of this photo wearing a hat.

Lila Sage Bromley, a Napa fourth grader, will not only see the film the day it opens — she’s in the movie. Well, at least her voice is.

Lila, age 10, is a professional voice actor. She’s provided a voice for plenty of commercials and even a cartoon. Now, her voice is bringing a “Toy Story” animated character to life.

Lila’s role in “Toy Story 4” is one of the most significant of her career. She got the role after Pixar contacted her agent for an audition. The film is produced by Pixar Animation Studios for Walt Disney Pictures.

“At first I didn’t really believe it,” said Lila of being selected. “I was super excited.”

On Oct. 22 and Jan. 11, Lila went to Pixar Animation Studios in Emeryville to record her voice for a new Toy Story character named Harmony.

This week she planned to travel to Los Angeles and the El Capitan Theatre to attend the Hollywood premiere of the movie.

Because the film hasn’t been released yet, “we can’t say much” about Harmony, said Lila.

All she could reveal is that Harmony is the daughter of the owner of the antique store where the toys find the character Bo Peep. Harmony is a smaller role in the film but she does have some scenes with main characters like Woody and a character named Gabby Gabby.

This Browns Valley Elementary School student has been doing voice acting work since she was about age 3, said her mother Jennifer Knight.

Knight is also a voice actor, so it was natural that daughter Lila would follow in her footsteps.

Lila explained that being a voice actor is much more than just reading out loud. It’s acting, but with your voice.

“You’re trying to create a character with your words,” she said.

For example, if Lila is doing the voice of a cartoon character she might sound “extra happy and excited.”

One trick to convey that emotion is to smile while she’s saying her lines, said Lila.

But for a commercial with a more introspective theme, like for a hospital, “We’ll pretend something sad has happened,” and use a more serious voice, said Lila.

“It’s about connecting with the emotion” of the commercial or character, said Knight.

In fact, some say being a voice actor is harder than being an on-screen actor. “You have to relay emotion just using your voice,” said Knight.

But being a voice actor does have some advantages, said Lila. For example, “You don’t have to memorize dance moves” or pages of dialogue. And you can do the work anywhere.

In fact, Lila and her family have their own professional studio at their house, located in a walk-in closet. But she also travels to studios to record her voice.

Like to Pixar Animation Studios. Pixar is amazing, said Lila. Giant statues and life-size decorations from many Pixar films are on display everywhere. The recording studio was decorated with toys and stuffed animals from every movie.

“I was nervous at first but they were really welcoming,” so she was able to relax, Lila said.

Lila was chosen for her role back in September, but she had to keep it a secret for months. “It was really hard,” said Lila. Once she was at the movies with friends and a “Toy Story 4” trailer came on, “and I couldn’t say anything.”

Besides “Toy Story,” Lila has also lent her voice to commercials for Stop & Shop, Chevron Corporation, Hello Fresh, Burts Bees Toothpaste, Cascade, Lucky Charms, Macy’s and Clorox. She can also be heard on V-tech electronic toys, a virtual reality app and an animated series called “Badanamu Cadets,” which airs outside the U.S.

Her voice was also part of a Super Bowl TV commercial for Coke.

Lila completes about six voice actor jobs a month and has done 30 jobs so far this year.

“She’s calm and focused and has a good ear,” said Knight.

Her pay goes into a savings account, but she’s allowed to spend some of her income. Knight didn’t say how much her daughter has earned but said it’s enough to pay for a good chunk of college.

Voice acting is fun, “and I want to keep doing it, but I also just want to be a kid,” she said.

Come June 21, Lila’s fourth-grade class plans to meet at the movie theater to see the film.

What will she think when she sees her character and her name in the credits?

As explained by Disney.com, Woody (voice of Tom Hanks) has always been confident about his place in the world, and that his priority is taking care of his kid, whether that’s Andy or Bonnie.

So when Bonnie’s beloved new craft-project-turned-toy, Forky (voice of Tony Hale), declares himself as “trash” and not a toy, Woody takes it upon himself to show Forky why he should embrace being a toy.

But when Bonnie takes the whole gang on her family’s road trip excursion, Woody ends up on an unexpected detour that includes a reunion with his long-lost friend Bo Peep (voice of Annie Potts).

After years of being on her own, Bo’s adventurous spirit and life on the road belie her delicate porcelain exterior.

As Woody and Bo realize they’re worlds apart when it comes to life as a toy, they soon come to find that’s the least of their worries.