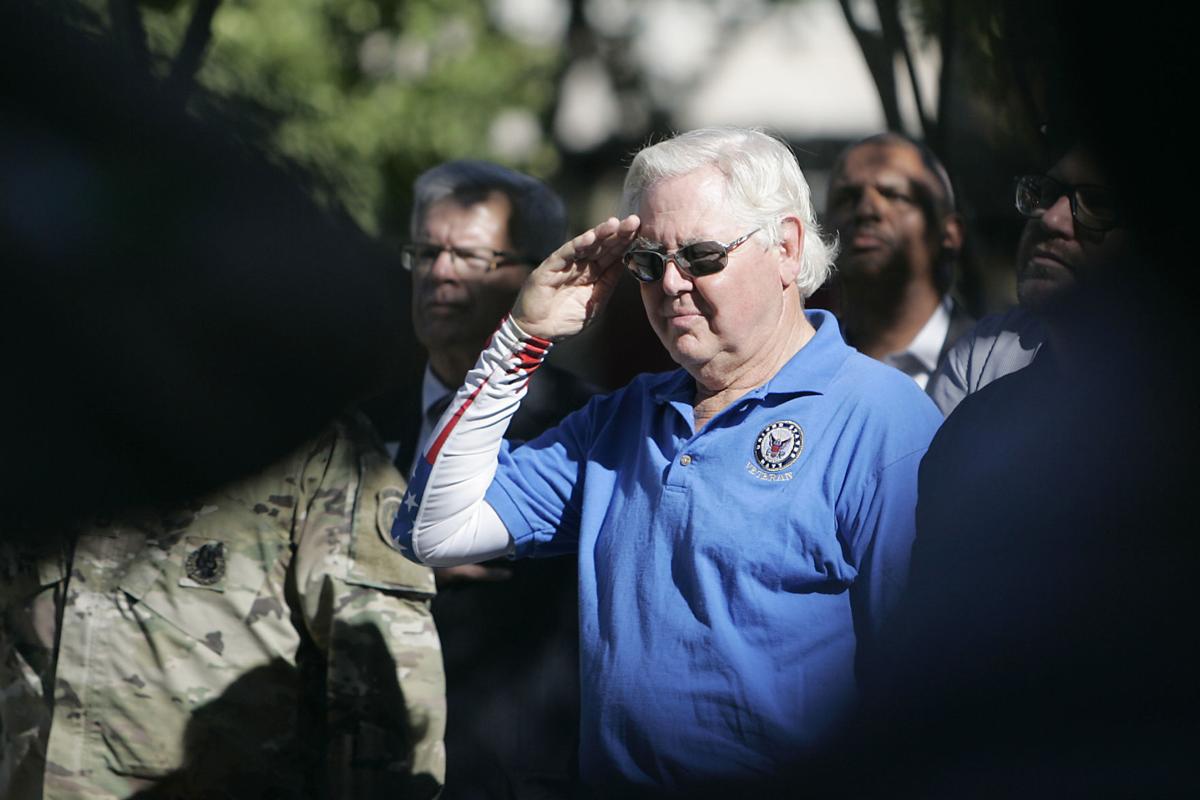 Napan Warren Nelson salutes during the singing of the national anthem at a ceremony honoring the 17th anniversary of the Sept. 11, 2001 attacks held at the Napa 9/11 Memorial Garden on Tuesday afternoon. 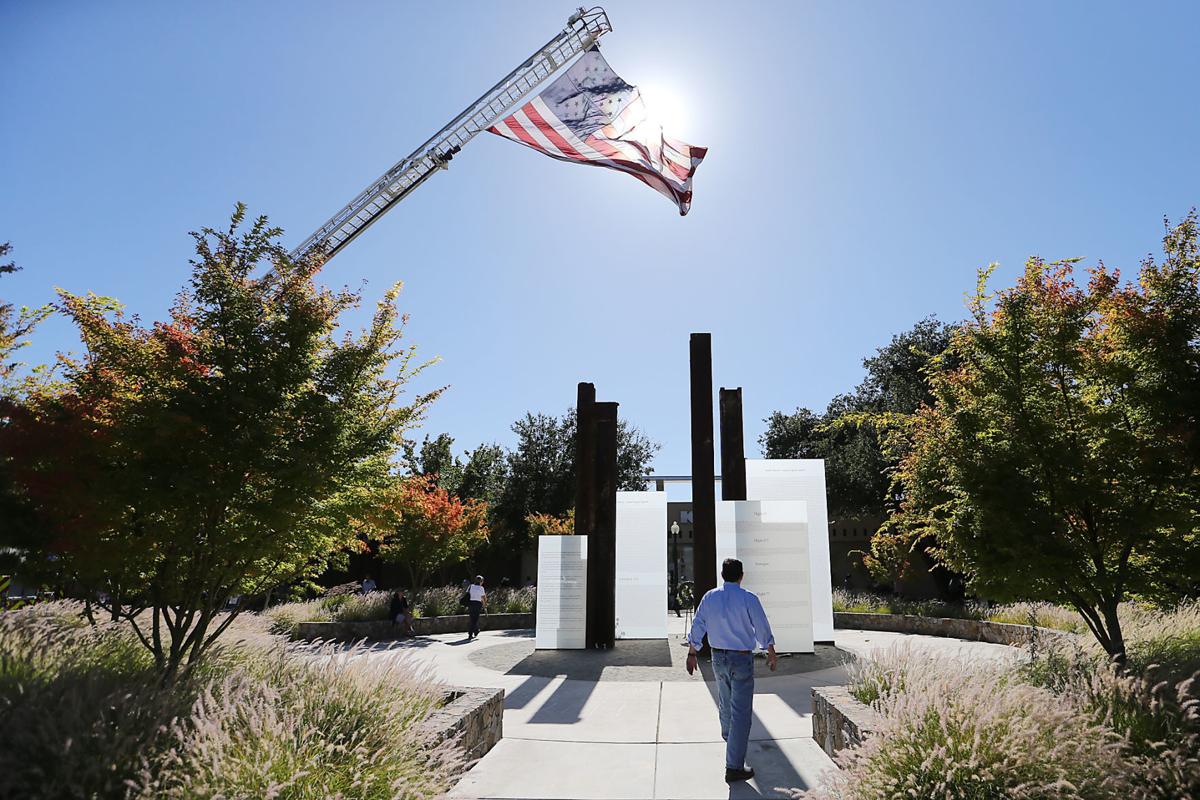 People arrive at the Napa 9/11 Memorial  on Tuesday afternoon to mark the 17th anniversary of the Sept. 11 terror attacks. 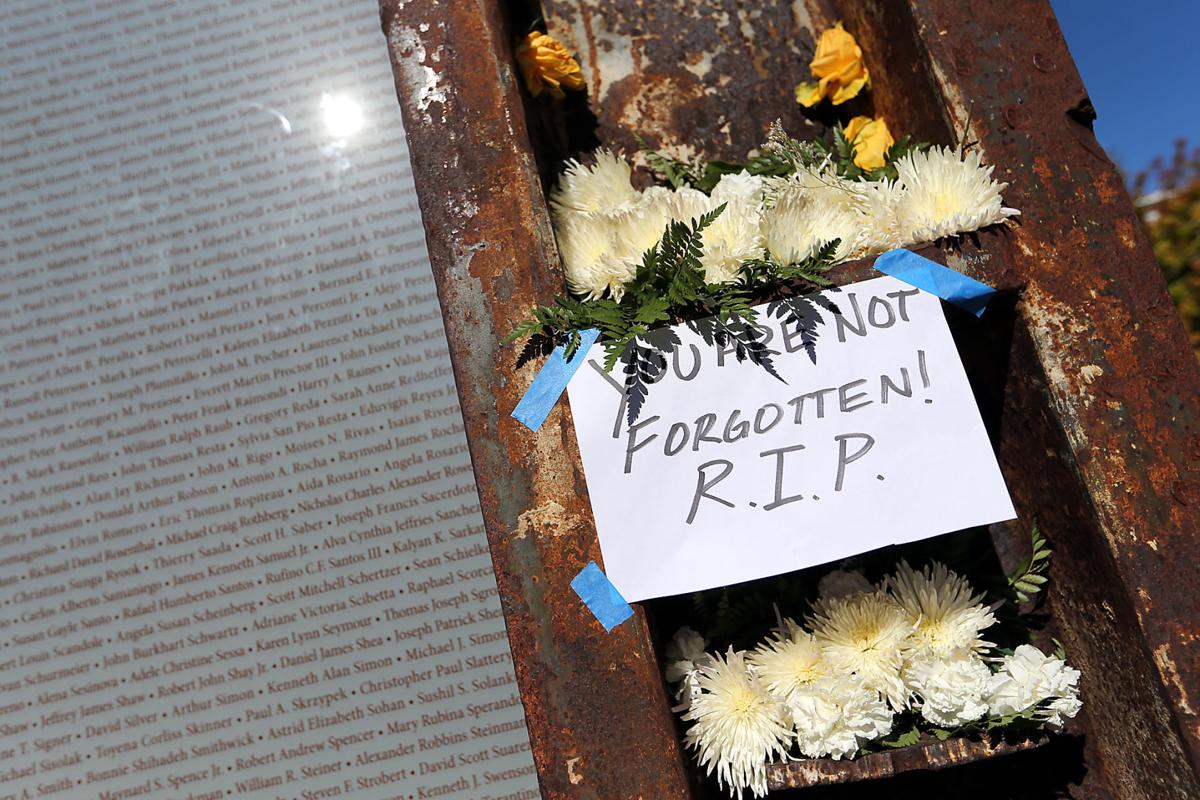 Flowers and a note were left at the Napa 9/11 Memorial Garden on Tuesday afternoon.

Napan Warren Nelson salutes during the singing of the national anthem at a ceremony honoring the 17th anniversary of the Sept. 11, 2001 attacks held at the Napa 9/11 Memorial Garden on Tuesday afternoon.

People arrive at the Napa 9/11 Memorial  on Tuesday afternoon to mark the 17th anniversary of the Sept. 11 terror attacks.

Flowers and a note were left at the Napa 9/11 Memorial Garden on Tuesday afternoon.

Gil Sanborn, a witness to the Sept. 11 attacks on New York City’s World Trade Center, was emotional as he spoke to a crowd gathered under a 20-foot American flag in Napa’s 9/11 Memorial garden.

“I think it’s only fitting that I’m speaking to you here in Napa,” he said, noting it is near the first anniversary of the fires that devastated Napa last year. “I think you, more than most towns and cities, understand deeply what the intersection is of both tragedy and service.”

More than 100 people gathered in the garden to observe Patriot Day, a national day of mourning held in remembrance of the nearly 3,000 lives lost on Sept. 11, 2001. American airplanes hijacked by terrorists plowed into the World Trade Center, the Pentagon near Washington, D.C. and a field in western Pennsylvania.

The Sunrise Rotary Club of Napa organized the Napa event.

Sanborn spoke of the horrific sight of watching trapped workers jump to their deaths, and of the gratitude he felt when a military jet flew overheard.

“I also came face to face with the most heroic display of selflessness we as a nation have witnessed in our lifetimes,” said Sanborn, who was in a building next to the twin towers. “I watched as hundreds of rescue workers … filed into the towers to begin their slow ascent to the burning floors above.”

“This country is strong, very resilient,” he said. “A lot of Americans left their normal jobs to join the military — to fight for this country and to fight against terrorism.”

Among those Americans, Sanborn said, was Bernie Narvaez, who served in the U.S. Marine Corps. Narvaez is chair of the Sunrise Rotary Club chapter.

“It’s important to have a ceremony like this to keep that memory alive, the heroes and the victims,” Narvaez said in opening remarks.

Napa resident Gusta Ruygers was among the teary-eyed attendees.

Ruygers said she was a United Airlines flight attendant for nearly 40 years and knew people who were flying on 9/11 and perished in the attacks. With tears in her eyes, Ruygers said she didn’t expect to feel so emotional at the ceremony.

“I intimately connected to the people that were on those two United flights (involved in the 9/11 attacks) and it’s always emotional every year,” she said, later adding: “I knew people who never knew their parents because they perished in the airplanes.”

The Napa Police Department sought to commemorate the anniversary with specialized badges that some officers will wear during September.

The badges depict in gold an eagle with its wings outstretched over the twin towers, perched atop a pentagon that reads “NEVER FORGET.”

See the badge below:

The tons of warped and gnarled steel that once formed the World Trade Center are nearly gone now, donated far and wide to form sculptures mark…