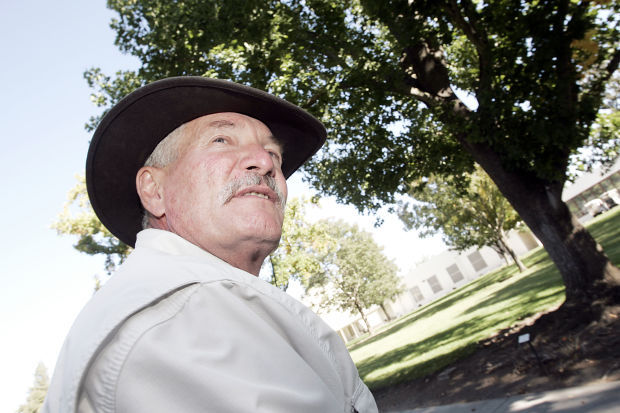 Michael Muir is  founder of Access Adventure. Earlier this year, he brought his pair of Percheron horses to the Veterans Home of California at Yountville and gave wagon rides to some of the residents. 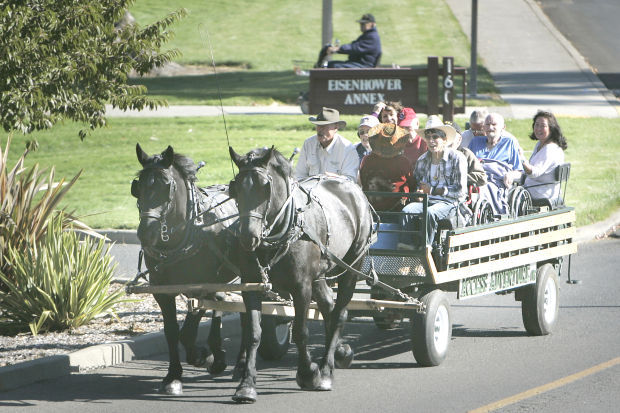 Michael Muir, founder of Access Adventure, takes a group of Veterans Home residents for a wagon ride in 2013.

Napa resident Michael Muir was 15 when he was diagnosed with multiple sclerosis, the onset of which left him almost paralyzed. He credits his passion for horses with helping him get back on his feet.

Though the disease ebbs and flows in its severity, sometimes confining him to a wheelchair, he has chosen to not allow it to shackle him.

Instead, he started a nonprofit 10 years ago called Access Adventure, which provides those with disabilities and the elderly access to the outdoors through wheelchair-accessible horse-drawn carriages.

“We take people places they could never go under their own power,” he said.

This effort earned him the title of “2014 Californian of the Year” from the Outdoor Writers Association of California. The association honored him at a conference in Crescent City in mid September.

Access Adventure is entirely run by volunteers and funded through the Syar Foundation and individual donations. It is a program of Molly’s Angels, a nonprofit that provides services for Napa residents 60 an older and also acts as Access Adventure’s fiscal agent.

Access Adventure has a roster of about 50 volunteers, 20 of whom are regularly active in every element of the organization — from sending out a newsletter to caring for the horses, Muir said.

Muir said he is amazed at how the organization subsists on the generosity of volunteers and gifts. “There’s an element of magic in what we’re doing,” he said.

The organization’s base is a ranch on Grizzly Island Road in Suisun, but it is expanding into Napa County. It serves people across Northern California from Modoc County to Yosemite to Monterey Bay.

Muir will bring the carriages to homes for group presentations, or work with students one-one-one.

He has seen his students make great strides. One is a young man named Mario, who suffered a traumatic brain injury in an auto accident. He was for a time in a persistent state of vegetation and could have been relegated to a care home, Muir said.

Instead, his family fought for him, he said. Mario’s mother approached Muir about teaching him to drive.

It has become an important part of his therapy, as he dictates commands to the horses and steers them.

Mario now comes to the Veterans Home in Yountville with Muir to help drive for the patients at the home.

“He no longer is the patient, he’s the caregiver,” Muir said. “It empowers him. It enriches the quality of his life.”

He and several partners have developed equipment to lift wheelchairs into the carriages and for people with limitations to steer them.

Often, those with a disability are housebound. Muir’s organization helps them get out.

“It’s a connection to the outdoors and the healing power of nature,” he said.

“John Muir was kind of a mystical man, and he said nature is healing.” Michael Muir said. “That was his message to the world.”

There is no question the elder Muir’s legacy has shaped Michael Muir’s path, he said.

John Muir was raised under a harsh father, Muir said. As a result, he took a gentler approach when raising his children, encouraging them to pursue their passions, he said.

The culture he created trickled down to Michael Muir’s own passion for horses, he said. “No one questioned the fact that I was a horse-crazy kid,” he said.

Muir has bred horses for the past 50 years. His life’s work is the horses he uses to pull the carriages for Access Adventure, called Stonewall Sporthorses. They are the result of breeding European and domestic blood lines combined for their versatility.

Eight of the 10 horses at his ranch are this breed, while one other pair are Percheron draft horses, a breed the French developed.

Muir is an accomplished athlete who has taken home medals from four world and international championships in Europe in combined driving. This is a three-day event run by the International Olympic Committee.

He’s currently training to compete in the Paralympics division of dressage in Brazil in 2016.

Muir says the training has helped strengthen him to better weather the second phase of MS, which is steadier in its progression and is unremitting.

Still, Muir continues to ask his therapists to find ways to strengthen what he still can. “You can be limited by your challenges or you can challenge your limits,” he said.

Muir latest example of this philosophy will be a 2,500-mile cross country caravan trip, the fourth of its kind on which he has embarked.

On Nov. 1, he and others who asked to join the journey will depart from Murrieta, California in their carriages.

People are coming from seven nations, including Netherlands, France, Canada and all over the U.S. for at least a portion of the trip, which is scheduled to arrive in Florida by the end of March.

The caravan is designed to launch a program called Welcome Home, which is support for injured veterans and others struggling to adapt to life with disabilities.

They have stops scheduled for veterans homes and rehabilitation centers across the country, where they will demonstrate Access Adventure’s work. The caravan will be paid for through IndieGoGo, a crowd-sourcing website.

Before his trip, Muir is planning to make an appearance with horses, carriage and crew at the Celebrating Seniors Fair Oct. 11 at the Napa Expo.

Muir’s vision for his organization is to continue expanding opportunities to serve the elderly and those with disabilities in this way.

“When people are always doing for you, it’s nice to find a way to give back,” he said.

Michael Muir is  founder of Access Adventure. Earlier this year, he brought his pair of Percheron horses to the Veterans Home of California at Yountville and gave wagon rides to some of the residents.

Michael Muir, founder of Access Adventure, takes a group of Veterans Home residents for a wagon ride in 2013.