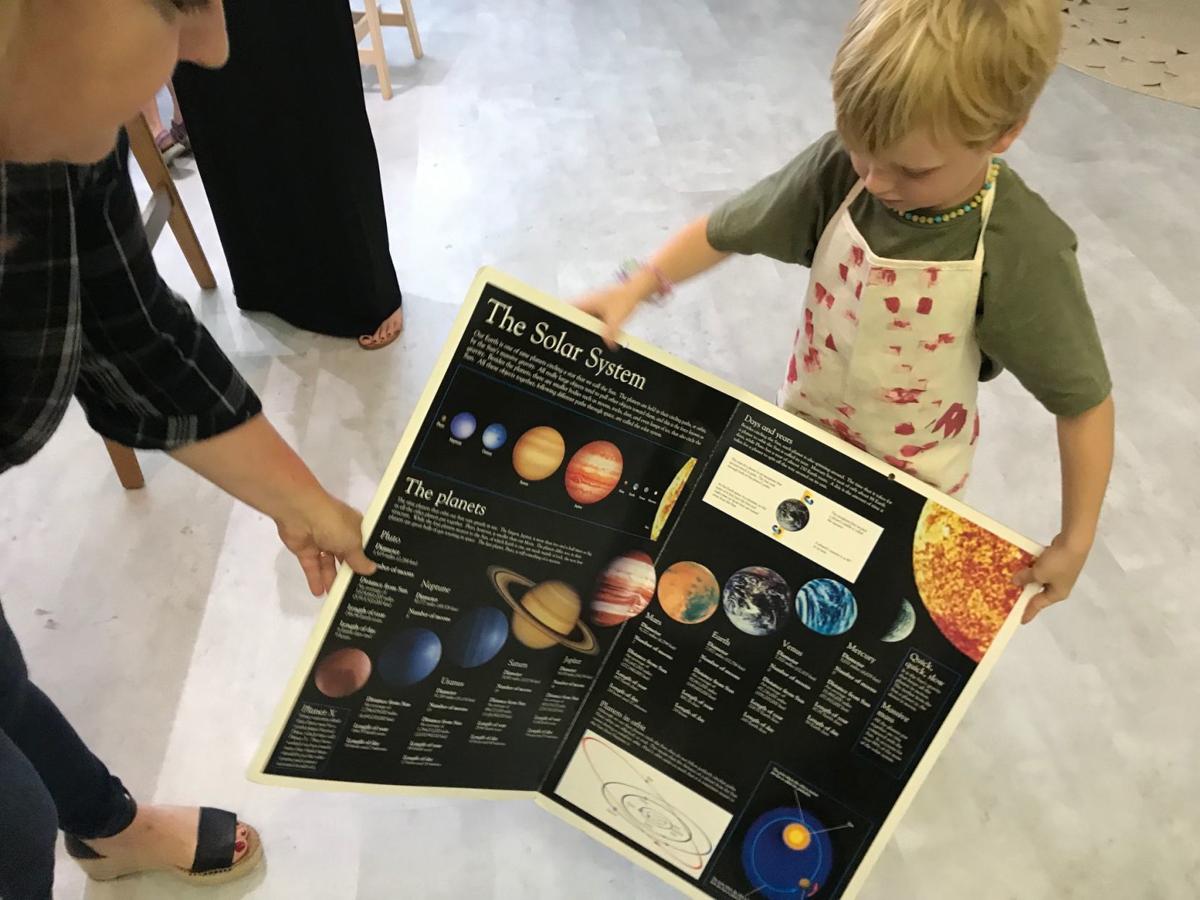 Grayson Clemmons shows off a book about space at the Mini GUILD summer art camp. He’s wearing an apron he printed at the camp. 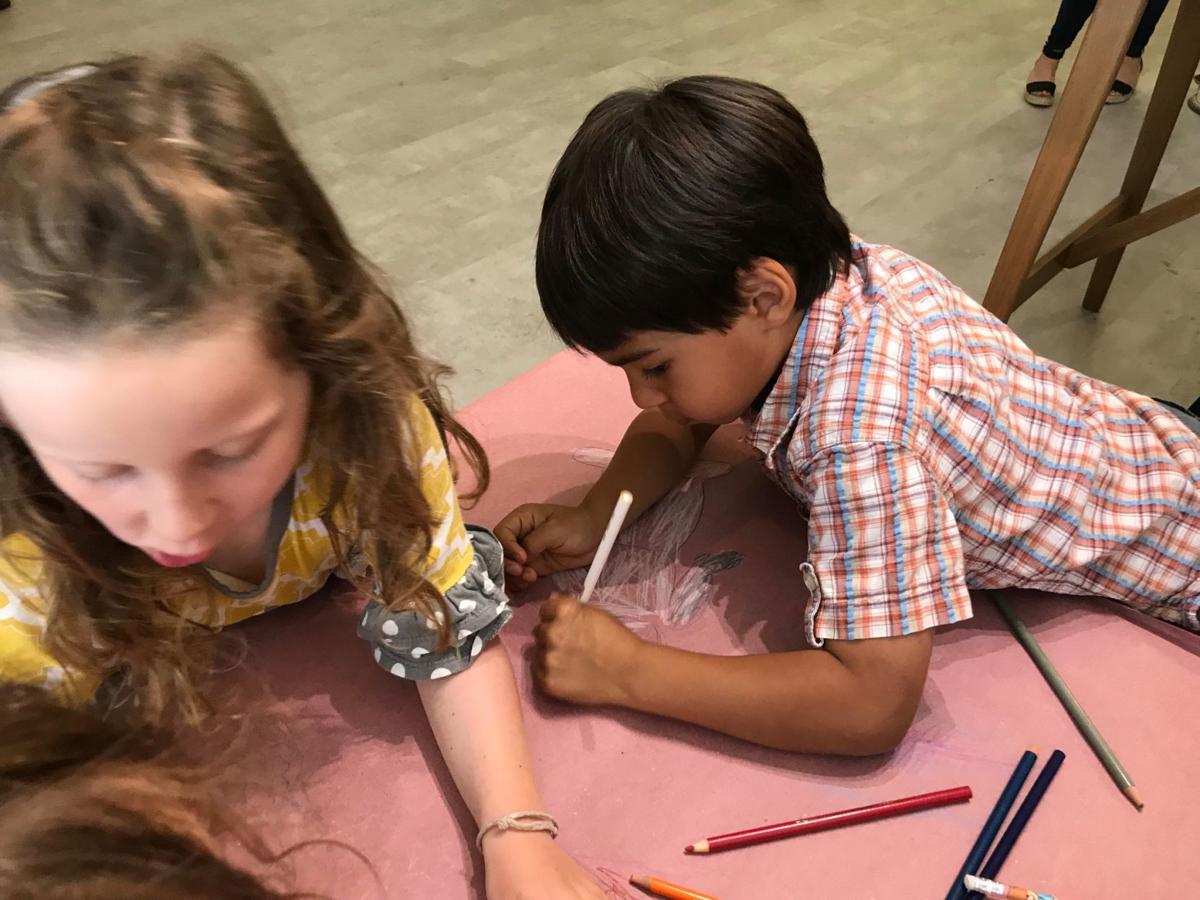 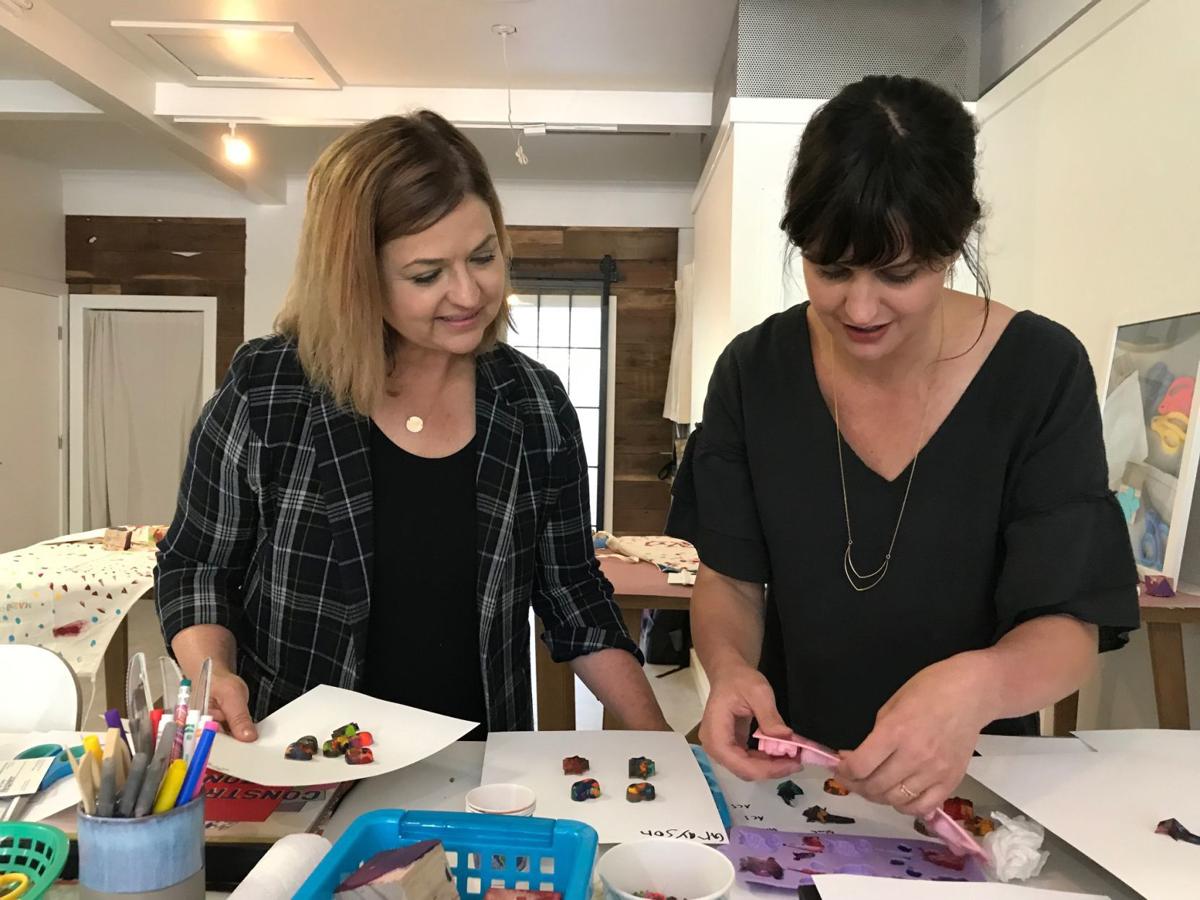 Monica Stickley and Carrie Saxl created the Mini GUILD summer art camps. In this photo, the two are sorting melted crayons the students made.

Using a rainbow selection of crayons and colored pencils, the eight campers at the Mini GUILD summer camp were deeply immersed as they illustrated their version of a solar system.

On a table-sized sheet of paper, one young artist drew a human wearing a white space suit. Another drew a planet dotted with red circles. A third drew rocket ships.

The group of campers created their vision of space on Tuesday morning during a new camp from GUILD.

The business recently launched with a series of five weeks of art camp for youths age 6 to 12.

Called “Out of this World,” the July 15 to 19 Mini GUILD camp featured “space-craft, cosmic creations and celestial works of art.”

The inspiration for Mini GUILD camps was their own children, said Stickley.

“There are plenty of sports camps and swim camps,” she said. “We wanted our kids to have a camp like this.”

“My kids have done art camps but a lot of the time most of the things they come home with are disposable,” Saxl said. Her goal is to help kids create art that is sustainable and can actually be used in the home.

“When you use the things you make, it takes that creativity a step further,” she said.

The two camp founders come from creative fields. Stickley works as an event planner and Saxl is a jewelry designer. Both have flexible work schedules, which allows them to create something like Mini GUILD.

On Tuesday morning, GUILD camper Nathanael Koross, age 6, said one of the fun things about art camp was melting broken bits of crayon into candy molds. He chose to make star shaped crayons “because they remind me of ninja stars,” he said, demonstrating some ninja-style kicks.

Koross said he likes arts and crafts “because I get to make different kinds things, like dinosaurs.”

Aubrey Schaublin, age 6, spent part of Tuesday morning drawing a green monster on a folding card. “Some cartoons have monsters in them,” she explained.

To Schaublin, making art “makes me happier,” she said. “When I’m sometimes mad at something, I just do art.”

“I like drawing pictures,” said GUILD camper Marjorie Terrien, age 7. What’s her favorite thing to draw? “Imaginary things that I make up,” she said.

After working on their collaborative solar system banner, the campers then each began coloring a sheet of white paper, covering it with as much crayon as possible. The plan was to then paint the paper black, let it dry and then scratch off parts of the black, creating an etching.

The campers eagerly began coloring their page using the molded multi-colored crayons they’d made earlier that morning, chatting among themselves.

“This is a pretty color,” said another, admiring her paper.

“This is like fire,” said yet another, drawing with an orange-red crayon.

“Oooh, there’s gold,” said another, as a bit of gold crayon appeared on her paper.

Upcoming Mini GUILD summer camps will include “Back to Nature,” “Making Waves,” and “Abracadabra.”

The owners said they understand that not every family can afford to spend $350 on a one-week camp. They hope to partner with ParentsCAN and Lilliput Children’s Services to offer scholarships.

Learn to draw, paint and sculpt animals in a week-long camp for artists at the Carolyn Parr Nature Center, 10 a.m. to noon, July 15-19.

'Free' is the magic word for Calistoga's recreation programs

Make it free, and they will come.

Parents have raised $80,000, with plans to open a Napa children's museum.

Grayson Clemmons shows off a book about space at the Mini GUILD summer art camp. He’s wearing an apron he printed at the camp.

Monica Stickley and Carrie Saxl created the Mini GUILD summer art camps. In this photo, the two are sorting melted crayons the students made.