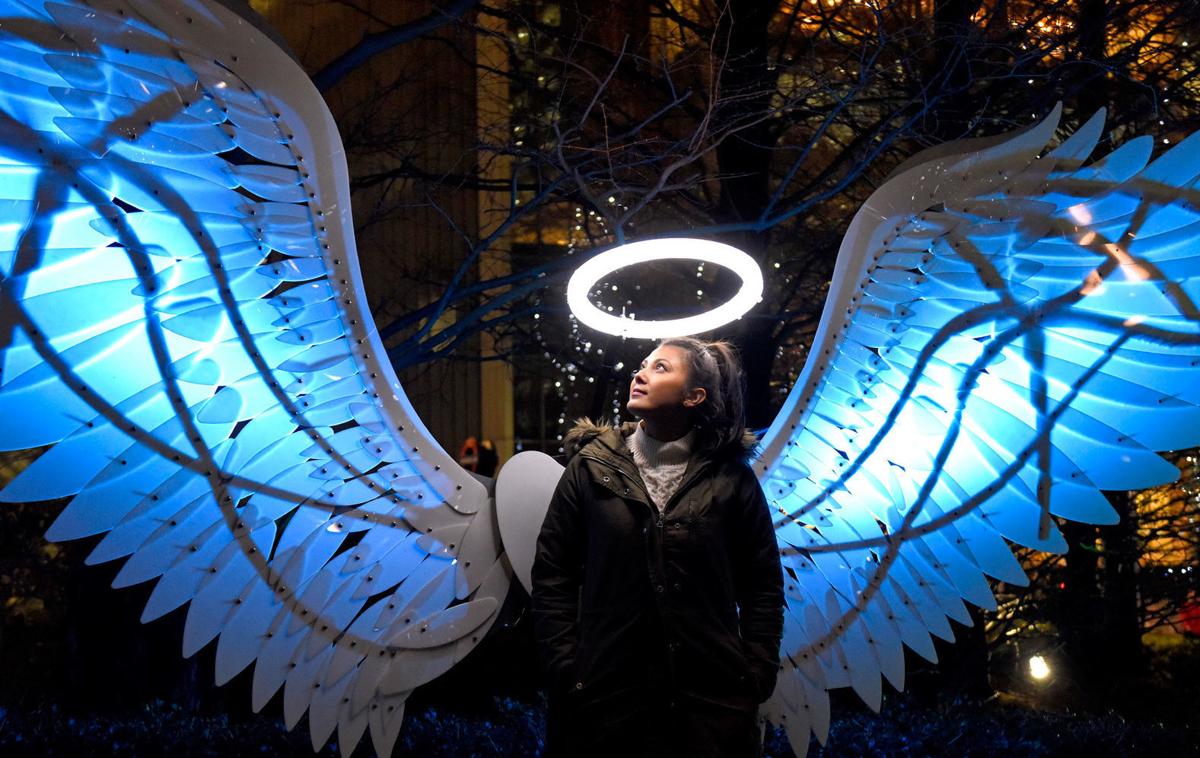 "Angels of Freedom," an installation by the OGE Group of Haifa, Israel, features sets of lighted wings and halos that give a seraphic appearance to viewers who stand in front of them. The artwork will be displayed at CIA at Copia during the third annual Napa Lighted Art Festival from Jan. 11 to Jan. 19. 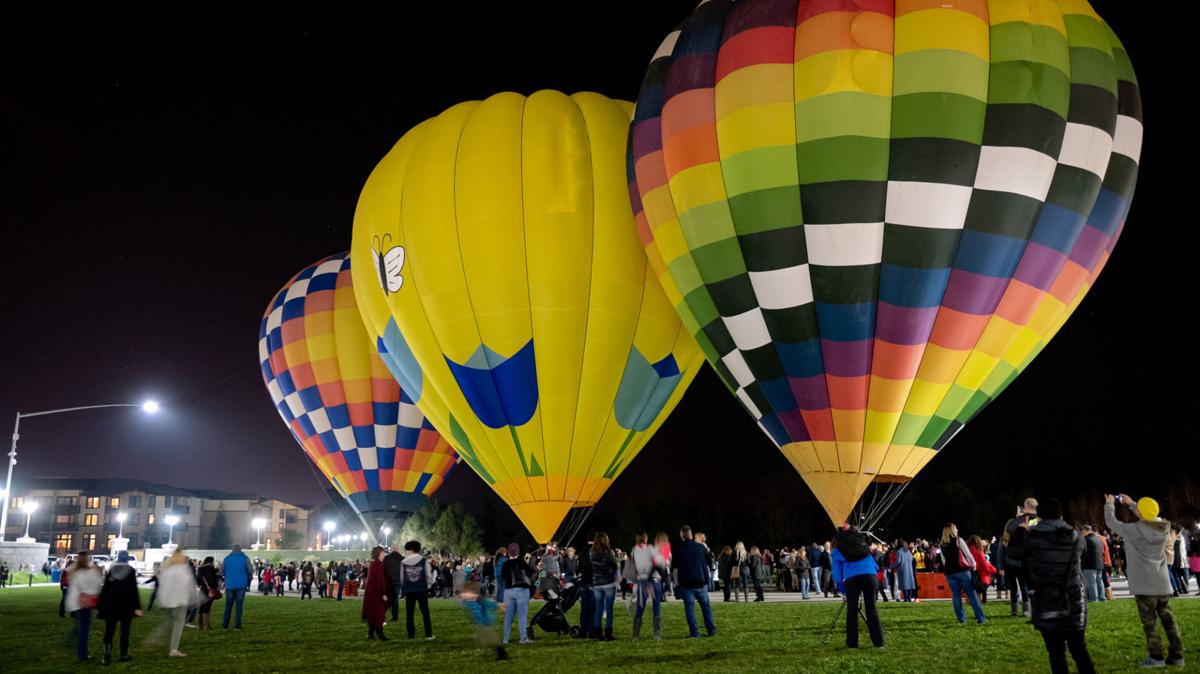 "Night Bloom" at the Oxbow Commons park features tethered and illuminated hot-air balloons as part of the third Napa Lighted Art Festival. The exhibit, which made its Napa festival debut in 2019, will be on view from 7 to 8 p.m. Saturdays and Sundays during the festival, which runs Jan. 11-19.

Organizers of the Napa Lighted Art Festival have announced the 11 artworks that will brighten the nighttime sky for nine days in January.

Contributors from across the U.S., and as far afield as France, Spain and Israel, will turn prominent downtown buildings into canvases in light, videos, color and lasers during Napa’s third annual open-air gallery.

The city-organized free festival, which debuted in December 2017, will take place nightly Jan. 11 to 19 and include a repeat of the downtown Lantern Parade, which will begin and end at Veterans Memorial Park on Friday, Jan. 17.

Turning central Napa into a giant exhibition hall is meant to give the city a new and fresh draw for visitors, according to Meredith Nevard, the city’s coordinator of public art.

“The overarching goal is to have Napa become a destination for public art, for new types of art,” she said Thursday “It’s reaching out to the art tourism crowd, nowadays a lot of people travel for art.”

Backdrops for the festival’s third edition will include downtown landmarks such as the Napa Valley Opera House, Goodman Library and First Presbyterian Church – along with other sites new to the exhibition, including the old Napa County Courthouse at 825 Brown St. The historic courthouse, which reopened in January after extensive repairs following the 2014 earthquake, will host “Chaos” by Hotaru Visual Guerrilla of Hernani, Spain, one of nine artists or collectives making their debut at the Napa exhibition.

Returning to the Lighted Art Festival are two entrants from the second edition in January 2019 – London artists Ross Ashton and Karen Monid, who will display “First Light” at First Presbyterian Church at 1333 Third St., and the mammasONica collective of Catania, Italy, which is presenting “Partitura #01” on the Riverfront building, 700 Main St.

Other installations will allow observers themselves to become a part of the experience, according to city Recreation Manager Katrina Gregory.

At the Napa River Inn at 500 Main St., “Lunchboxing with Lasers” by Mike Gould of Jackson, Michigan will feature interactive controllers built out of lunchboxes that allow spectators to shape the resulting laser light patterns. “Angels of Freedom,” a piece at CIA at Copia (500 First St.) by the OGE Group of Haifa, Israel, will include glowing sets of wings and halos that lend a seraphic appearance to onlookers standing in front of them.

Joining the creators traveling from Europe and around the country will be one local entry: the Digital Lab program of New Technology High School in Napa. Students from the New Tech lab will present “Elemental” at the AT&T Building at 1300 Clay St.

Other festival artworks will include:

— “Chroma Current” by David Sullivan of New Orleans at the Native Sons of the Golden West parlor, 937 Coombs St.

A holdover from the 2019 festival will be “Night Bloom,” a collection of illuminated, tethered hot-air balloons that will be displayed at the downtown Oxbow Commons. Viewing will take place only on Saturdays and Sundays during the festival, from 7 to 8 p.m.

Festival organizers also will stage weekend meet-and-greet events with several participating artists, with at least four such gatherings scheduled, according to Nevard.

The Napa County Historical Society will lead tours of historic downtown landmarks serving as venues for the Lighted Art Festival. Tours will begin at 4 p.m. on Saturdays and Sundays and start at the Goodman Library. Tickets are $20 ($15 for members of the historical society) and are available through Brown Paper Tickets at http://bit.ly/38Bl6xi

Also returning to the festival Jan. 17 is the Lantern Parade, in which individuals, students and groups are invited to carry lanterns of various types in a mile-long downtown procession. The parade route will commence at 6:30 p.m., beginning and ending at Veterans Park by way of Second, Franklin and Third Streets, passing by several of the festival exhibits.

All lanterns must be illuminated with batteries or stored solar power, and no open flames will be allowed.

A free lantern-making workshop is planned for 1 to 3 p.m. Jan. 7 at the Napa Senior Activity Center, 1500 Jefferson St., with online registration at http://bit.ly/38AnVyH. A lantern design guide also is available online at https://bit.ly/35gb16I.

Night Bloom exhibit: Oxbow Commons park, 7 to 8 p.m. on Saturdays and Sundays only

For maps, schedules and other information, visit donapa.com/lights/

Tickets can be purchased online at http://bit.ly/38Bl6xi

Parade starts and ends at Veterans Memorial Park by way of Second, Franklin and Third Streets

Napa’s largest, most visible art gallery will again open after dark – on the city’s streets.

Napa will light up on Jan. 11-19 with illuminated creations throughout the town.

"Angels of Freedom," an installation by the OGE Group of Haifa, Israel, features sets of lighted wings and halos that give a seraphic appearance to viewers who stand in front of them. The artwork will be displayed at CIA at Copia during the third annual Napa Lighted Art Festival from Jan. 11 to Jan. 19.

"Night Bloom" at the Oxbow Commons park features tethered and illuminated hot-air balloons as part of the third Napa Lighted Art Festival. The exhibit, which made its Napa festival debut in 2019, will be on view from 7 to 8 p.m. Saturdays and Sundays during the festival, which runs Jan. 11-19.