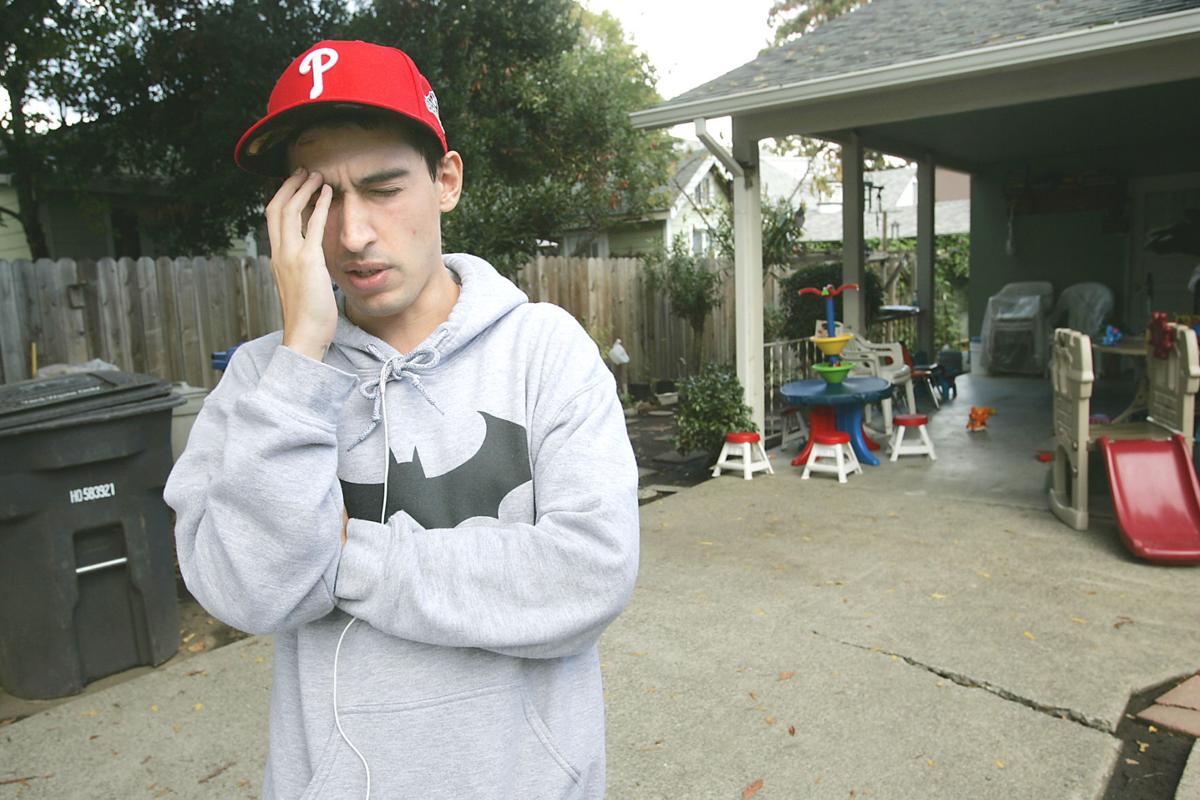 Luis Ortiz describes the night he ended up in the Queen of the Valley Medical Center in September. He had experienced headaches and nausea during the day and was taken to the emergency room where doctors discovered he had a worm living in his brain and required immediate surgery. 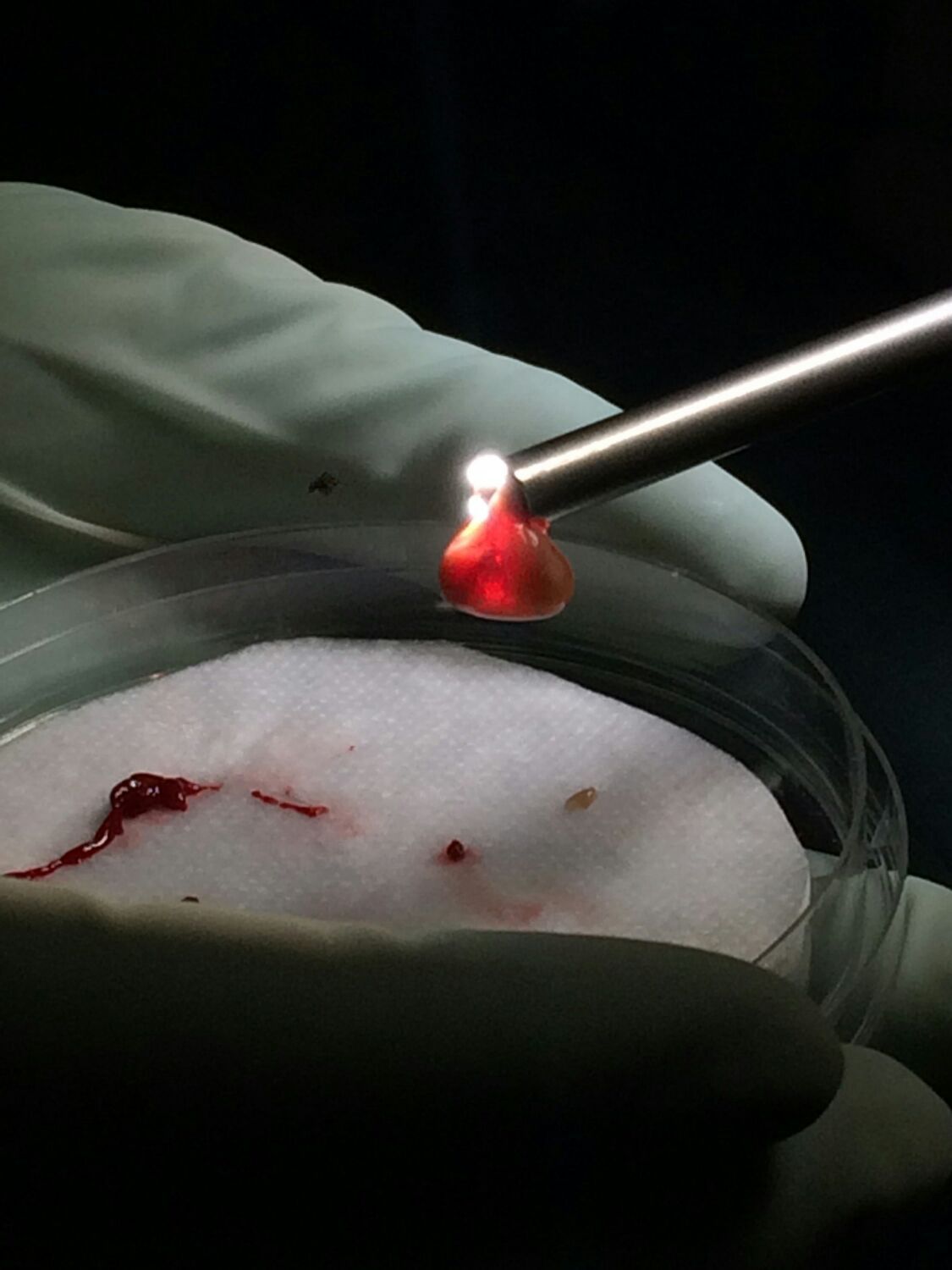 This cyst containing a pork tapeworm was removed from Luis Ortiz’s brain. Ortiz came to Queen of the Valley with a headache, requiring immediate surgery that saved his life.

It sounds like something out of a horror movie. A man goes to the emergency room with a headache. After examining him, doctors find a worm in his brain.

Unfortunately for Luis Ortiz of Napa, the story was all too real. Not only did the 26-year-old college student have a worm his brain, it almost killed him.

Ortiz said his headaches began in late August. At the time, “I didn’t think much of it,” said Ortiz, who was attending Sacramento State. “I just ignored it.”

During the first days of September, Ortiz visited a friend and his parents in Napa.

He had been skateboarding on a warm day when the pain increased. He figured maybe he had a migraine or heatstroke, but as time went on, “it got worse,” he said.

He went to his mother’s house where the pain intensified. “That’s where it gets kind of blurry for me,” he said.

His mother said Ortiz appeared disoriented. He began to vomit. She rushed him to the Queen of the Valley Medical Center’s emergency department.

At the hospital, Ortiz’s condition worsened and he became comatose. After performing scans and other tests, doctors put a drain in his brain to alleviate the pressure.

When he regained consciousness, the doctors gave Ortiz the news. A tapeworm larvae had lodged itself in his brain, and he’d need immediate surgery to remove it.

Ortiz is lucky he arrived at the Queen when he did, said his neurosurgeon, Dr. Soren Singel.

The worm had formed in a cyst that was blocking the flow of water to chambers in the brain, “like a cork in a bottle,” Singel explained. Another 30 minutes of that blockage, and “he would have been dead,” he said. “It was a close call.”

Apparently, such parasitic worms in the body aren’t that uncommon. If people eat pork that is infected with worms, they can become infected with a pork tape worm.

Ortiz didn’t appear to have a tapeworm, said Singel. Instead, he must have eaten some kind of salad or unwashed food that was contaminated with eggs. The tapeworm eggs made it into his intestine and eventually the larvae made it into his brain, a condition known as Cysticercosis, according to the Centers for Disease Control.

“I was shocked,” said Ortiz. “I just couldn’t believe something like that would happen to me. I didn’t know there was a parasite in my head trying to ruin my life.”

Singel was less disturbed. “We see quite a few patients” in the U.S. with parasitic worms, especially in California, where locals visit Mexico, South and Central America, he said.

In some of those areas, pigs and humans live in close proximity, leading to contamination. Meat in other countries is not always subject to the same inspections as in the U.S.

However, brain worms usually don’t kill the patient. Most of the time the worm dies in the brain, said the doctor.

Working at the Peggy Herman Neuroscience Center at the Queen of the Valley, Singel used a neuro endoscope, “like a fancy camera on a little stick the thickness of a spaghetti noodle,” for the brain surgery.

“We made a hole in skull bone over the eyebrow and drove the camera into the center of the brain and fished out the cyst and the worm” using a grasping tool inside a scope. “The worm was still wiggling when we pulled it out,” said Singel.

The worm itself was actually small – about 1/16 of an inch. The cyst that contained the worm was about 1/3 of an inch. Ortiz then started taking medication to kill any remaining worms in his body.

Singel showed Ortiz the worm. “I was like, ‘That came out of me?’ It looked pretty gross,” said Ortiz.

The surgery and the aftermath have greatly impacted his life, said Ortiz. He had to drop out of school, move back home and find a temporary home for his dog. He can’t drive or work.

“My memory is like a work in progress,” said Ortiz. “It gets better from therapy,” but he has to remind himself to do his memory exercises and other daily tasks.

He’s still not sure how he got infected. It had been many years since he traveled to Mexico and he doesn’t eat pork often, Ortiz said. Singel said that the worms could have been in his body for many years.

“I was really lucky,” said Ortiz. “They said, ‘If you came in a hour later, you wouldn’t be alive.’ I’m really thankful that the Queen isn’t too long of a drive from my parents’ house. I’m grateful for all the things the doctors and my parents have done.”

“I’m looking forward to driving again,” getting his dog back, “moving back to Sacramento and hanging out with my friends.”

The doctor recommends that people make sure all pork products are cooked thoroughly and come from an inspected facility. For travelers, avoid fruit or vegetables that can’t be cooked or peeled. And don’t drink tap water in places where it’s not filtered and cleaned.

As for Ortiz, “I have been staying away from pork ever since.”

Editor's note: This story has been modified from its original form to add detail and a hyperlink from the Centers from Disease Control.

At least two gunshots were fired during an armed robbery early Saturday morning in downtown Napa, according to police.

The Napa Planning Commission is not recommending approval for a new downtown hotel after it failed to reach an agreement with the developer over parking concerns.

A man was hit by a car on Tuesday suffered significant broken bones, police reported.

Luis Ortiz describes the night he ended up in the Queen of the Valley Medical Center in September. He had experienced headaches and nausea during the day and was taken to the emergency room where doctors discovered he had a worm living in his brain and required immediate surgery.

This cyst containing a pork tapeworm was removed from Luis Ortiz’s brain. Ortiz came to Queen of the Valley with a headache, requiring immediate surgery that saved his life.