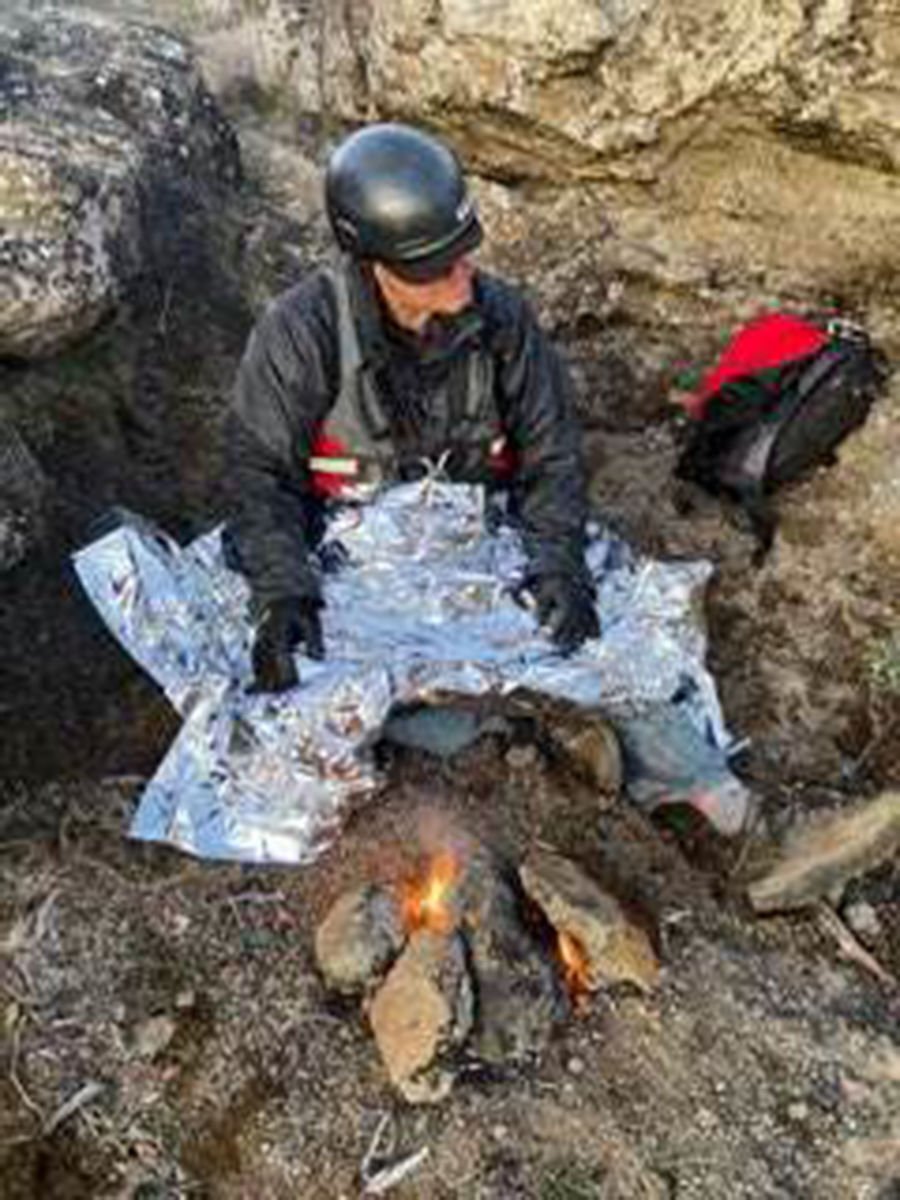 CHP rescuers built a fire and covered Koch with warming gear until a helicopter could extract him from the Calistoga Palisades at daylight. 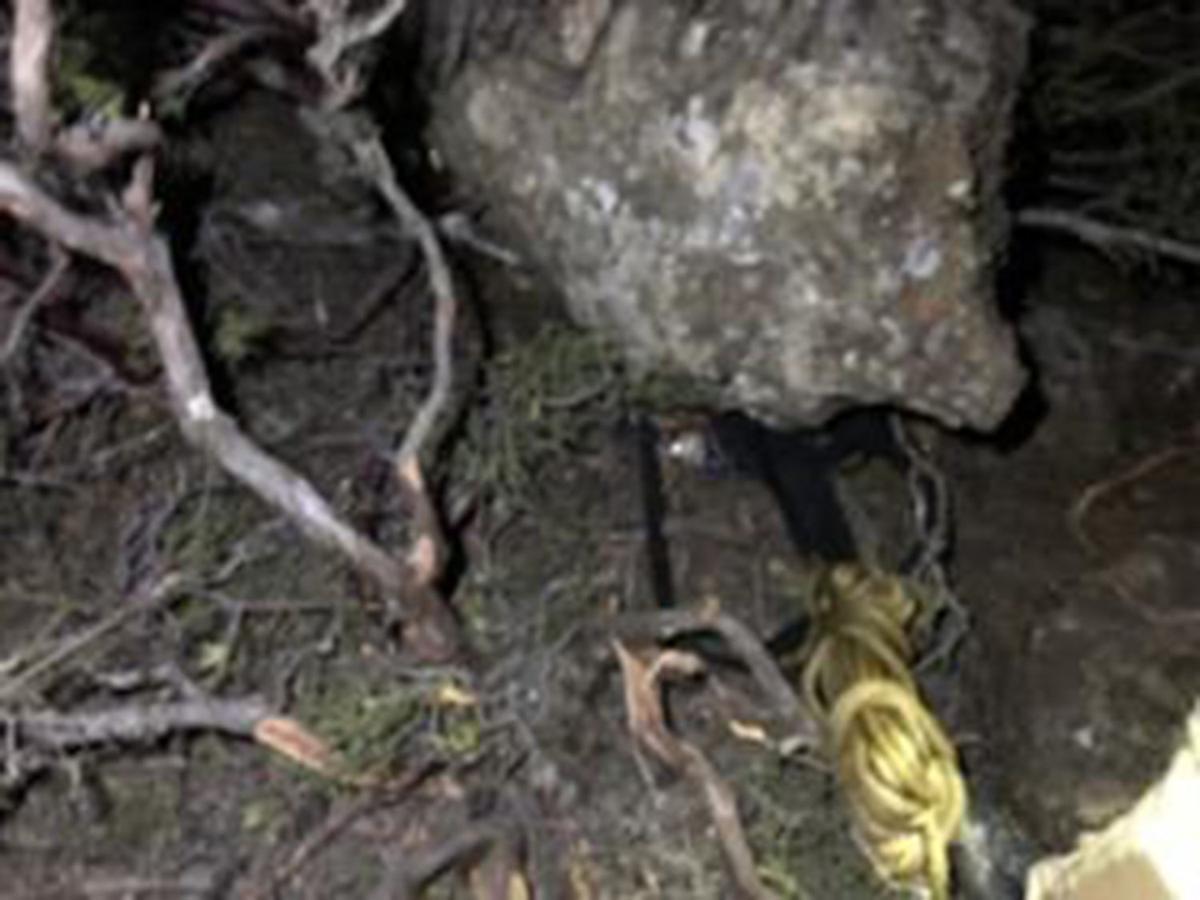 This is boulder that had Jason Koch of Napa trapped for eight hours. He had to dig out from under it. 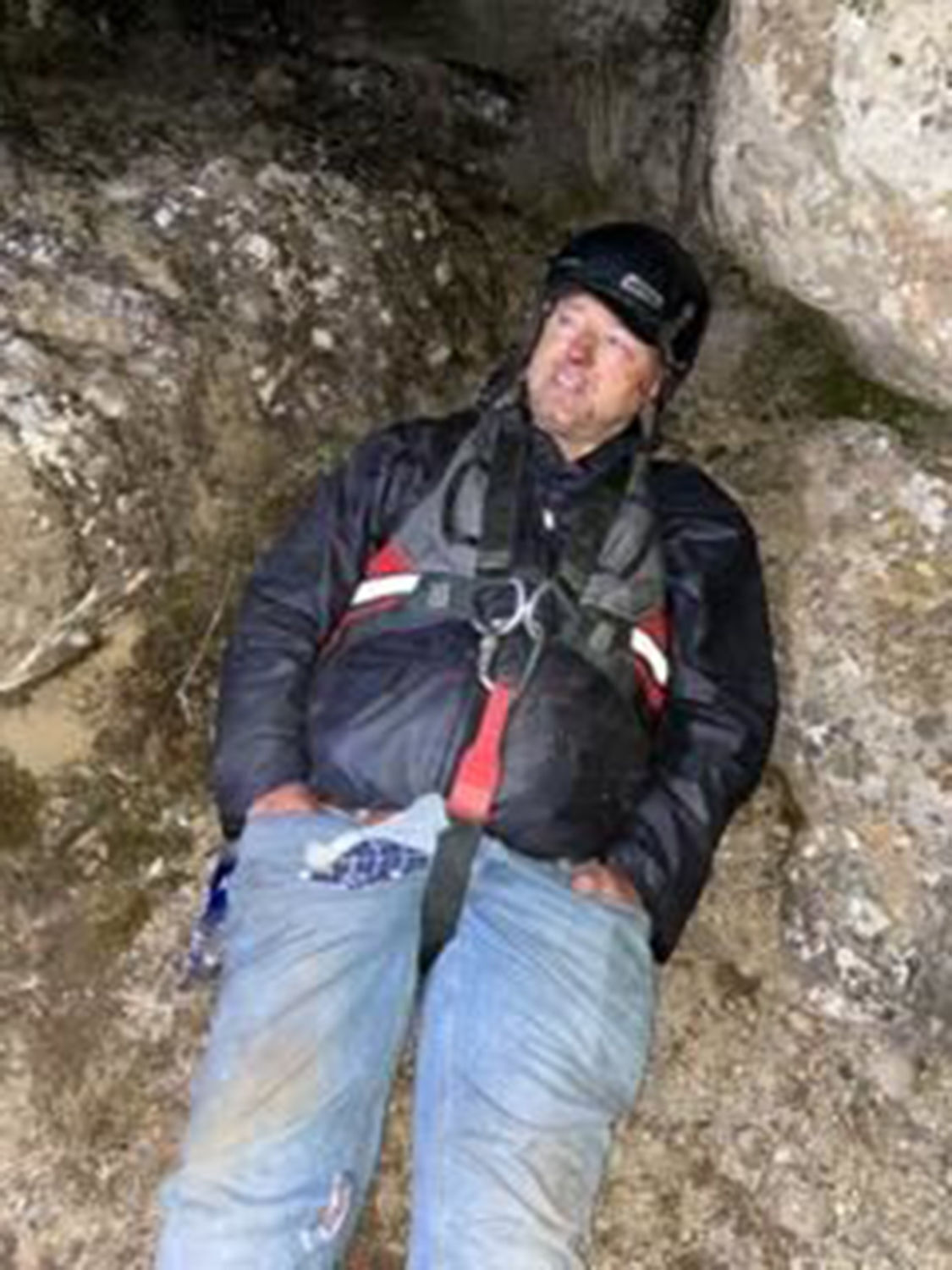 Jason Koch warms his feet by a fire created by his CHP rescuers. 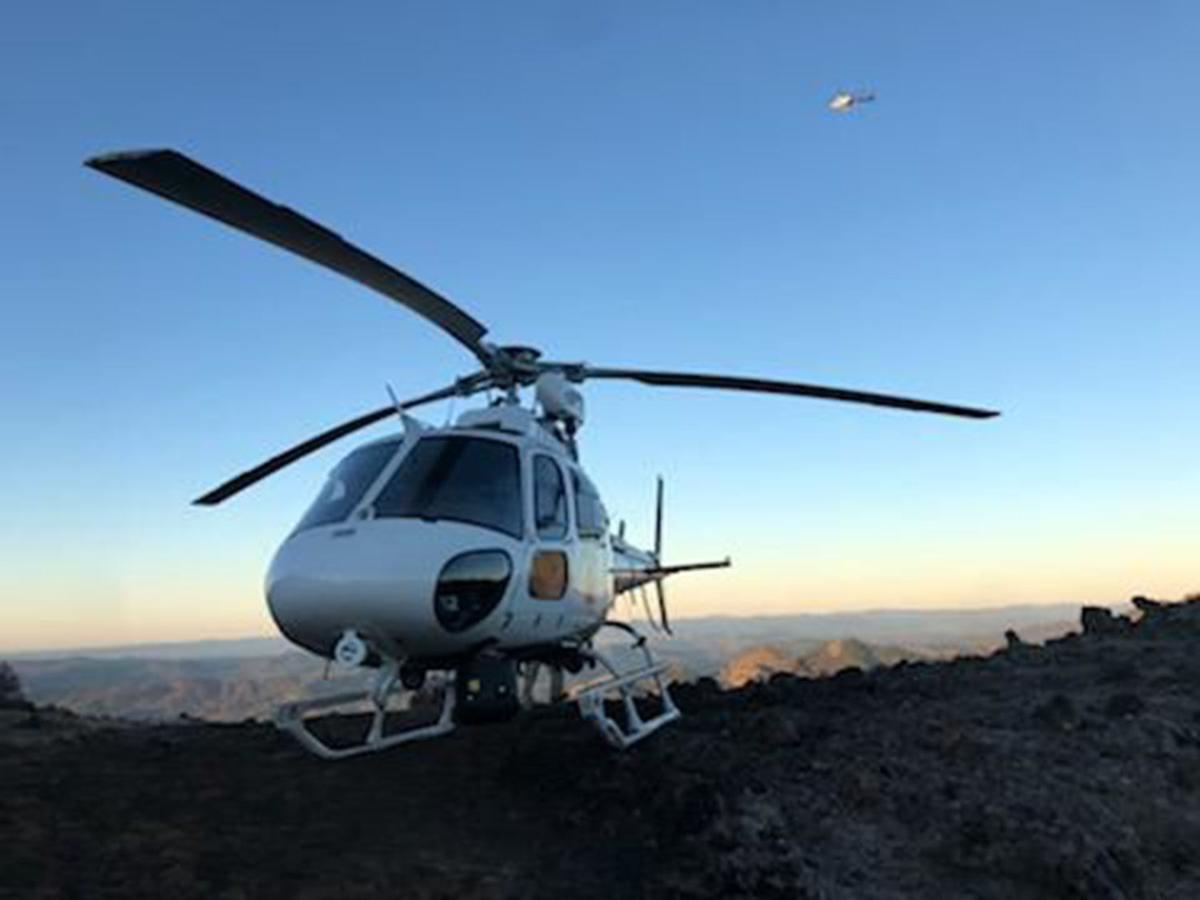 This is the CHP helicopter that carried Jason Kosh off the Palisades after being trapped for eight hours under a rock, then spending the night waiting for daylighyt.

Jason Koch found himself in a dire situation last week. He was trapped under a boulder on the rugged back side of Calistoga’s Palisades, darkness had fallen, he had no way of extracting himself or calling for help.

Koch, a 48-year-old Napa resident who owns his own window washing business, had left work early that Monday afternoon to search for a $1,500 drone that had crashed the day before in wild terrain while he was making a nature video.

Find a drone in rocky terrain, in the dark? Not impossible, said Koch, who admits “I really didn’t think that through.”

He’d equipped himself with two flashlights, extra batteries, a liter of water and a sandwich. He began the search about 5:30 p.m. as darkness descended over the Palisades, an area already blackened by the Glass Fire.

Koch said he had been looking forward to the adventure of hunting for his downed drone in the dark, but later admitted, “I don’t know anyone who would do anything as nutty as climb a mountain that late and climb back down.”

About 6 p.m., as he was jumping from one boulder to another, the rock he landed on shifted, dumping him to the ground, face down, then rolling over his mid-section. He was pinned, with only one arm free.

Koch said he was stunned. “How is this possible?” he asked himself.

Then he prayed. “God, I’m in a place where I don’t know what’s happened to me. I give you my life, God. Send me an angel to throw this boulder off me.”

When no angel appeared, Koch started working on other strategies.

“I’m aware there’s a big possibility that I’m stuck. I’m clearing my soul and giving up my issues,” Koch said in an interview Monday morning.

He did not despair and say his goodbyes to family and friends. “I wasn’t at that place yet,” he said. “I was resistant to the idea of being stuck there. I’m ready to fight.”

Over the next eight hours, Koch struggled in every way possible. He managed to pop off his gashed helmet and excavate dirt with a stick, giving him more wiggle room.

He would tell himself: “OK, Jason, you have to try harder here. You’re not trying hard enough.”

He tried calming himself down and reducing his heart rate. With one flashlight within reach, he clicked off SOS signals into an uninhabited void. He remembered the story of “the guy who was trapped by a rock and how he had to cut his hand off to free himself.”

Eventually, he wiggled enough to reach his keys and free a penknife. Then he cut open the backpack he’d been lying on and extracted his cellphone. Before he could attempt to dial 911, it slithered away.

More squirming, more digging with his one free hand, and finally he crawled out of his backpack and was free. At 2:10 a.m., he called 911. Soon after, a California Highway Patrol helicopter was overhead. An hour later, a CHP paramedic and pilot were able to hike in and join him for the wait until dawn when an aerial lift would be safest.

The officers built him a fire and wrapped him in a blanket and a bullet-proof vest. They joked that their campfire couldn’t get out of control. The Glass Fire had pretty much burned everything around them, Koch said.

During the wait for dawn, Koch said he couldn’t sleep. “I’m too jacked up,” he said. “I think I remembered those stories in the back of my head that ‘you don’t go to sleep’” in extreme situations such as this.

Being hoisted up to the chopper for a ride to a waiting ambulance at the Calistoga fairgrounds was pretty “cool” in every sense of the word, Koch said. “I’m probably so cold it wouldn’t matter if I got more cold because I’m already too cold,” he remembers thinking.

At Queen of the Valley Medical Center in Napa, Koch said he was diagnosed as having 11 fractured ribs, a blood clot on an aorta and signs of kidney failure due to rhabdomyolysis, the death of muscles from being pinned to the ground for eight hours.

Koch said he spent two days in the ICU at UC-Davis Medical Center in Sacramento, then got shifted to a regular ward. He came home Sunday.

“I’m drinking lots of water and trying not to move too much,” he said. “It’s kind of weird. As I roll over, I hear this crunch and this strange grind. I hear it from different places inside my chest. I go, ‘Wow, I’ve never heard that before.’”

Koch said he won’t be able to return to work from some time. His ribs may take three or four months to fully heal. He’s on blood thinners and is supposed to avoid activities that might cause him to bleed.

Koch said he has run up medical bills of between $50,000 and $70,000. Because he doesn’t have medical insurance, he expects to work out a repayment plan.

A friend has set up a GoFundMe account, seeking $10,000 to help Koch deal with some of his expenses.

Koch said he has tremendous gratitude toward the first responders who helped save his life. He may try to set up a fund to buy equipment they might need, he said.

He’s learned one lesson from his ordeal: “You’re not as alone as you think. Everybody is your friend. People want to be a part of your life. You need to communicate what your plans are. Tell people where you’re going and when you’ll be back. Tell three or five people.”

And what about that lost drone?

“Yup, I’m going back to find the drone,” he said. “It’s a pretty valuable little toy.”

SEE THE WEEK IN CARTOONS

JAN. 2: A man in his 20s suffered at least one life-threatening gunshot wound in a shooting in south Napa.

JAN. 7: Police reported making a traffic stop in a residential neighborhood that resulted in the arrest of the driver and the confiscation of …

JAN. 5: Up to 20 residents of Rohlffs Manor Senior Apartments were evacuated while law enforcement cautiously investigated a 911 report of a g…

JAN. 1: A motorcyclist involved in a pursuit with American Canyon Police was killed when the rider lost control of the motorcycle and collided…

DEC. 29: American Canyon police attempting to stop a vehicle suspected to be involved in a criminal threat case saw it flee at speeds up to 80…

DEC. 21: Napa police arrested a transient suspected of taking items from a vehicle.

Napa Police: Security guard at Queen of the Valley threatened with a knife

DEC. 15: Napa Police were called to Queen of the Valley Medical Center on a report of a patient threatening a security guard with a knife.

DEC. 10: Napa Police were called to the 1000 block of Von Brandt Street on a report of a disturbance involving a knife.

DEC. 5: A 26-year-old Napa man was arrested after an incident that police said ended with officers using a bean bag shotgun and a Taser in the…

NOV. 26: A 19-year-old Napa resident is being held without bail on charges of attempted murder and assault with a deadly weapon after police r…

How to help Jason

Go to a GoFundMe account set up to help pay his medical bills: https://www.gofundme.com/f/help-raise-money-for-jason-koch

A female hiker was rescued by helicopter Saturday afternoon after suffering a head injury on a trail outside Calistoga, according to the Calif…

The hiker had to rip open his jeans and dig his cellphone out from under a rock to summon help, the CHP said.

Firefighters were greeted by exploding canisters when they used a ladder to cross from the mainland.

Impact knocked the ambulance on its side, the CHP said.

Three people were reported injured. The wine tanker was empty.

CHP rescuers built a fire and covered Koch with warming gear until a helicopter could extract him from the Calistoga Palisades at daylight.

This is boulder that had Jason Koch of Napa trapped for eight hours. He had to dig out from under it.

Jason Koch warms his feet by a fire created by his CHP rescuers.

This is the CHP helicopter that carried Jason Kosh off the Palisades after being trapped for eight hours under a rock, then spending the night waiting for daylighyt.