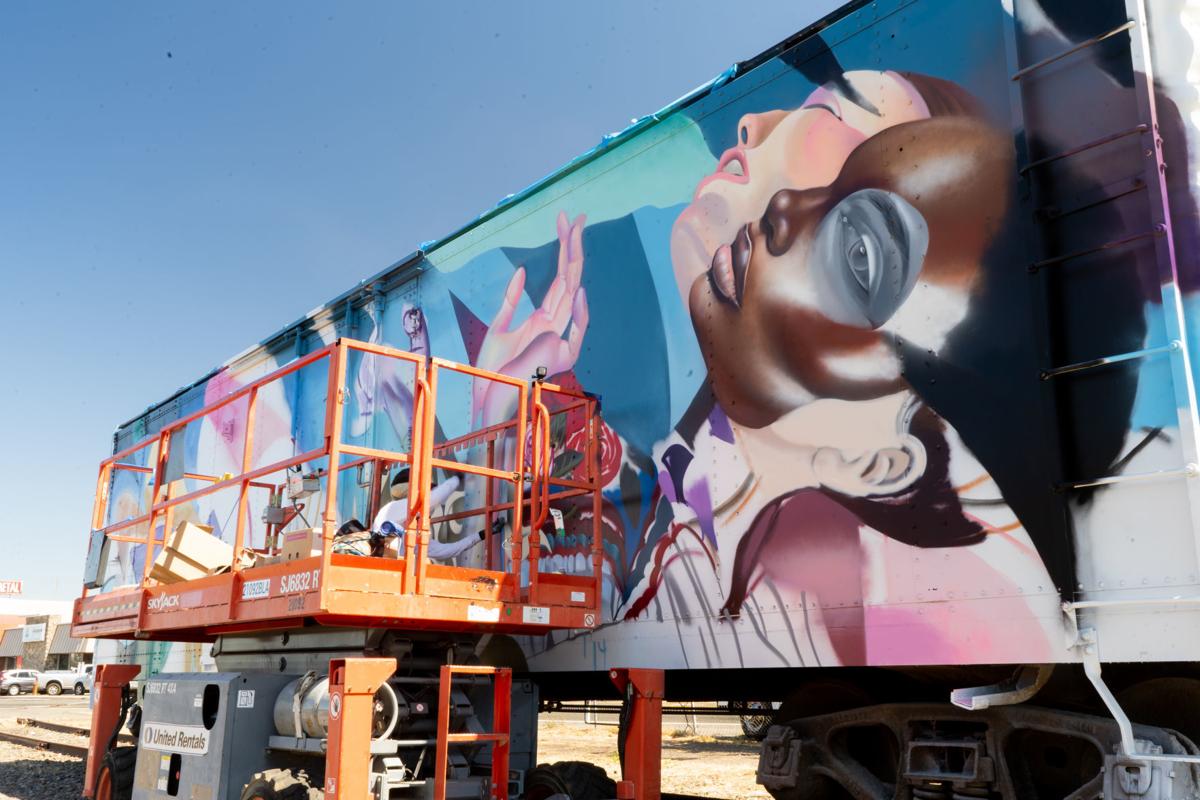 ELLE, a graffiti/street artist/muralist, works on a rail car art installation near the Wine Train car barn along Soscol Avenue. The car will be installed on tracks near Lincoln Avenue. 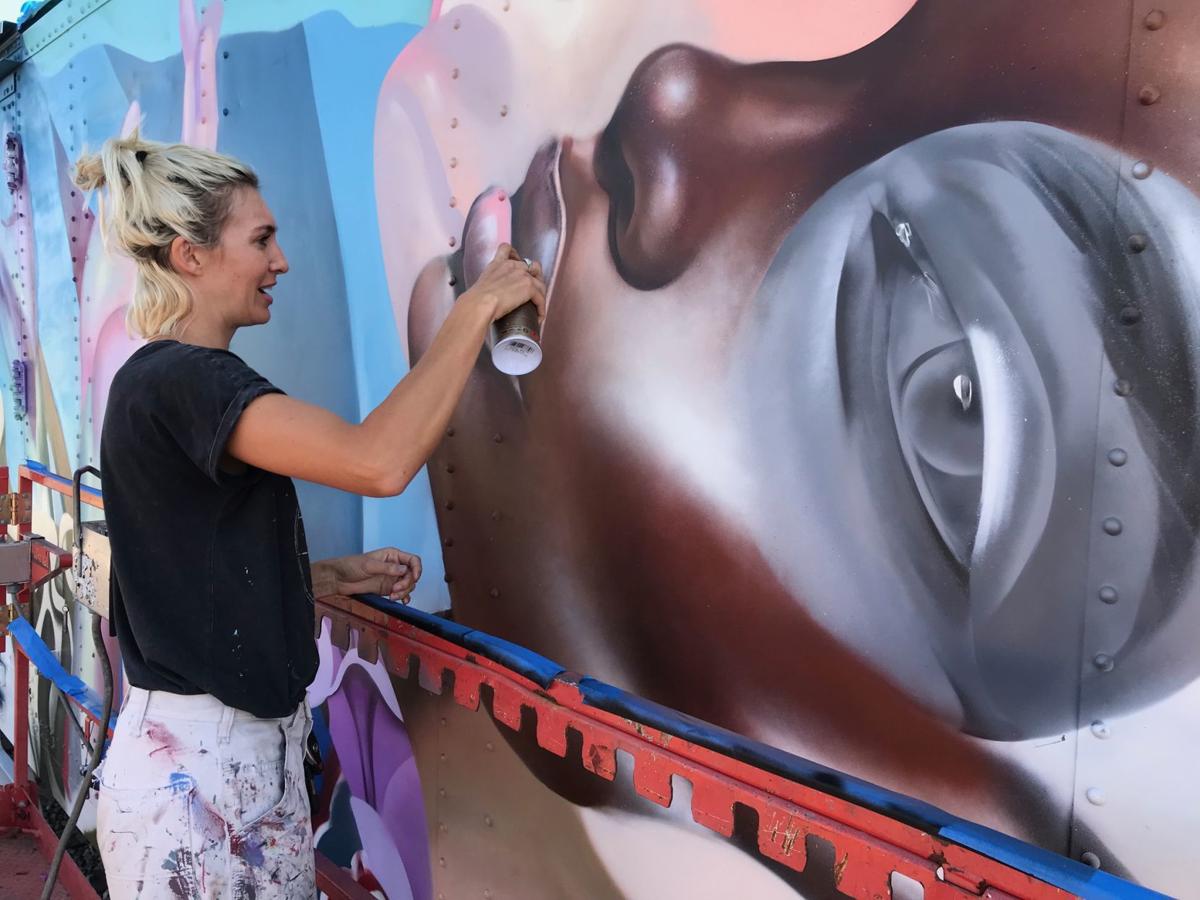 ELLE, a graffiti/street artist/muralist, works on a rail car art installation near the Wine Train car barn along Soscol Avenue. 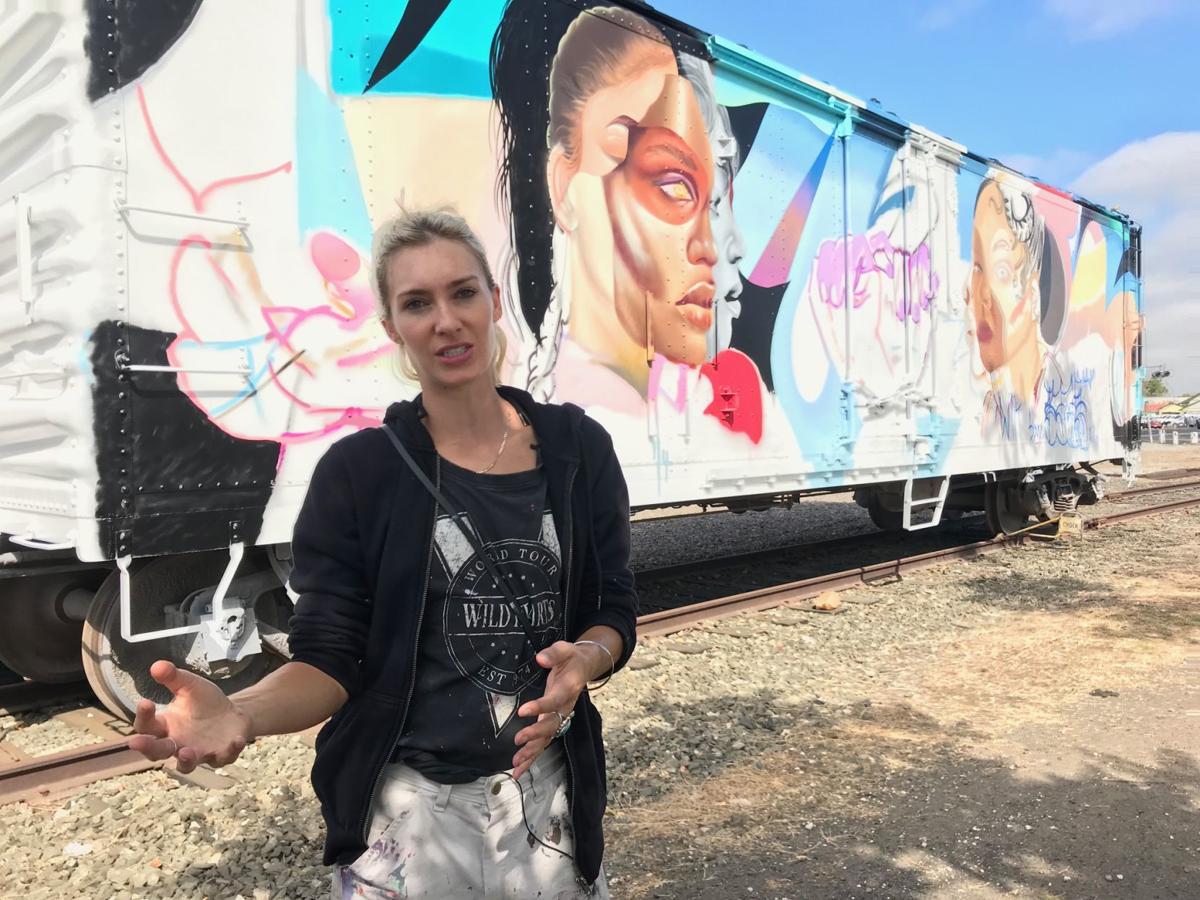 Artist ELLE works on a rail car art installation near the Wine Train car barn along Soscol Avenue. The train car will eventually be on display on a set of train tracks south of Lincoln Avenue. 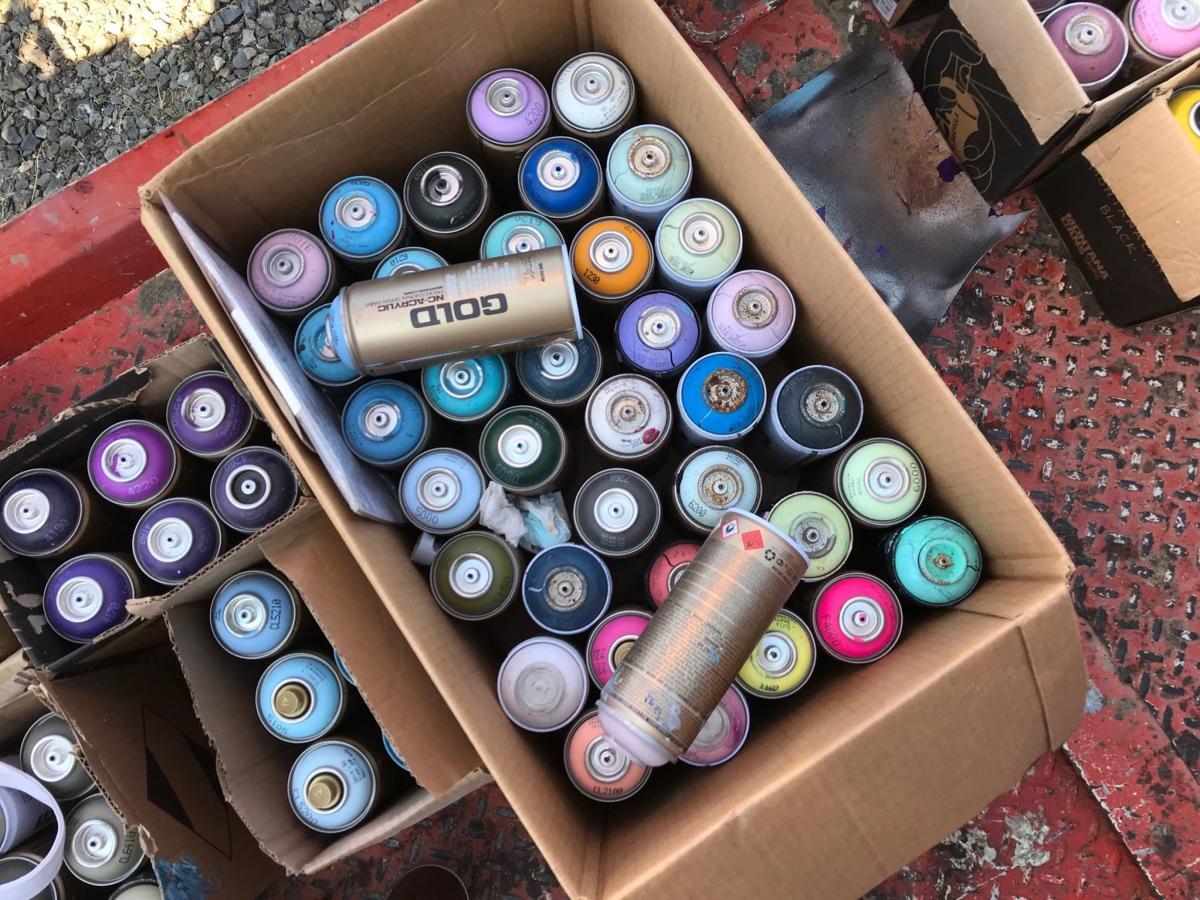 The woman seen this past week spray painting the sides of a train car near the Napa Valley Wine Train rail barn isn’t vandalizing the equipment. She’s creating art.

The artist, known as ELLE, has been hired by Napa’s Rail Arts District to create a mural on wheels – one that when completed will be parked on a set of side tracks along the Wine Train route.

Originally from Napa, but now based in Los Angeles, New York and Melbourne, Australia, ELLE returned to the valley to work on this project.

“This is crazy,” ELLE said. She’s excited to be in Napa working on such a project. “It’s amazing that street art is happening here in Napa.”

Wearing paint-speckled pants, gloves and a sturdy face respirator, ELLE began panting the mural on four sides of a 60-foot-long train car on Sept. 2 and should finish on Saturday, Sept. 14.

Giant portraits of women will cover the sides of the car. The design was created from multiple images collaged together, the artist explained.

She’s placed these portraits in front of a backdrop of vibrant colors and patterns drawn from Mexican art, folklore and textiles. “I love my work to be super colorful,” she said with a laugh.

“It’s important for me to represent strong females as central to my work,” ELLE, who is in her mid-30s, said.

“I want this work to be inclusive” of Napa’s Hispanic culture, she said. “It’s such a big part of Napa.”

Because ELLE began as an illegal graffiti artist in New York, she does not use her real name.

ELLE said her Napa work has yet to be titled. She usually picks a name – typically something female inspired — after the work is done, the artist explained.

The train car will be moved in October to a site in the Rail Arts District near Lincoln Avenue and along the Napa Valley Vine Trail.

Described as a graffiti/street artist/muralist, ELLE said after hearing about the RAD Napa project, she knew wanted to participate.

“This has been really special to be here,” she said. “It’s such an honor.”

Established in 2016, the Rail Arts District Napa is a nonprofit organization led by the Napa Valley Vine Trail Coalition, the Napa Valley Wine Train and the local arts and business communities.

It was created to beautify an urbanized and sometimes-gritty stretch of the bicycle and pedestrian pathway that happens to parallel the Wine Train tracks through the city. The 1.7-mile section of the railroad contains a gallery of public artworks from artists around the world.

Ultimately, the “district” should consist of more than 30 murals along the train tracks.

RAD Napa “has done an immense job curating the project—commissioning some of the world’s top street artists such as Filipe Pantone and Hueman,” ELLE wrote in an email. “I am thrilled to be included in this incredible lineup of artists.”

Pantone, an Argentinian-Spanish artist, created the geometric artwork behind Matthews Mattress. Hueman, from the East Bay, created a large mural of red lettuces on the Culinary Institute of America at Copia.

ELLE said after graduating from Napa High School, she left the area to study at UC Davis. She later attended Brandeis University and participated in a Maryland Institute College of Art study abroad program.

She also moved to New York where she worked as a model, for Goldman Sachs as a trainer and as a bartender. In New York City, she saw street art and graffiti everywhere “and got obsessed with it.”

“I loved it,” she said. “It’s such a gift that someone would put art” in a public place, and for free, she said. “Everyone can relate to street art.”

After earning a following for her work, she’s been sponsored by a spray paint company and traveled the world installing her art. “It turned into a job,” she said. “Now, I have this amazing career.”

While she started her public art by creating graffiti, these days her work is all invited and commissioned. Her art has been painted on buildings, but also printed on yoga clothing and tote bags for Reebok and on posters for sale at IKEA.

Once she’s completed the Napa train car, ELLE will travel to Atlanta, Kentucky, New York, Cincinnati, Marseilles, France and then Mexico. And that’s just before Christmas.

The artist explained that she chose the name ELLE because it means “she” in French. There are fewer female graffiti and street artists, she noted. “I had felt like women weren’t being represented on the street.”

However, her Napa roots run deep. She attended a local Catholic elementary school for nine years. Her family, including a grandmother, still live locally.

Growing up in Napa, ELLE said she admired the work by local artists such as Gordon Huether. She said she was also influenced her Napa High school art teacher, Chuck Svendsen.

“He was a very inspiring teacher,” she said. Svendsen encouraged ELLE to apply for a prestigious summer art program hosted by California Institute of the Arts in Santa Clarita.

“He really showed me there was a future in a career of art.”

While ELLE has painted the sides of multi-story buildings, a 40-meter wrap around the new Nike Headquarters building in Melbourne and even a big rig, this is the first time she’s painted a railroad car.

“This is tricky,” she said, pointing to the latches and handles that are installed on the outside of the car.

ELLE will speak about her work in the context of contemporary street art, graffiti and mural painting at 10:30 a.m. on Saturday, Sept. 14 at the CIA at Copia at 500 First St.

The program is free and open to the public.

The Napa Quake Mosaic, a collaborative public art project created to honor those affected by the 2014 Napa earthquake, is launching a crowdfun…

The return next month of the Napa Lighted Art Festival will bring more art and light to city streets – as well as music, lectures and a new pa…

Large wraparound mural planned for CIA at Copia in Napa

A large mural inspired by nearby gardens is planned for the south and west walls of the CIA at Copia in Napa’s Oxbow District.

As more murals and artwork pop up along Napa’s Vine Trail, so has a new business that celebrates that same art.

The Rail Arts District, which runs through central Napa parallel with the Napa Valley Vine Trail, will host an open house Thursday, April 26, …

“Jack & Jill” will join a butterfly-holding woman, surrealist houses and a prism of colors among the images gracing the Napa Valley Vine Trail.

Oct. 15 is the deadline to submit a poem on the theme of "Passages" to be considered for the new Rail Arts District Napa project.

St. Helena educators are hoping an uptick in vandalism doesn’t escalate into something more serious as a viral craze challenges kids to cause mayhem at school.

ELLE, a graffiti/street artist/muralist, works on a rail car art installation near the Wine Train car barn along Soscol Avenue. The car will be installed on tracks near Lincoln Avenue.

ELLE, a graffiti/street artist/muralist, works on a rail car art installation near the Wine Train car barn along Soscol Avenue.

Artist ELLE works on a rail car art installation near the Wine Train car barn along Soscol Avenue. The train car will eventually be on display on a set of train tracks south of Lincoln Avenue.