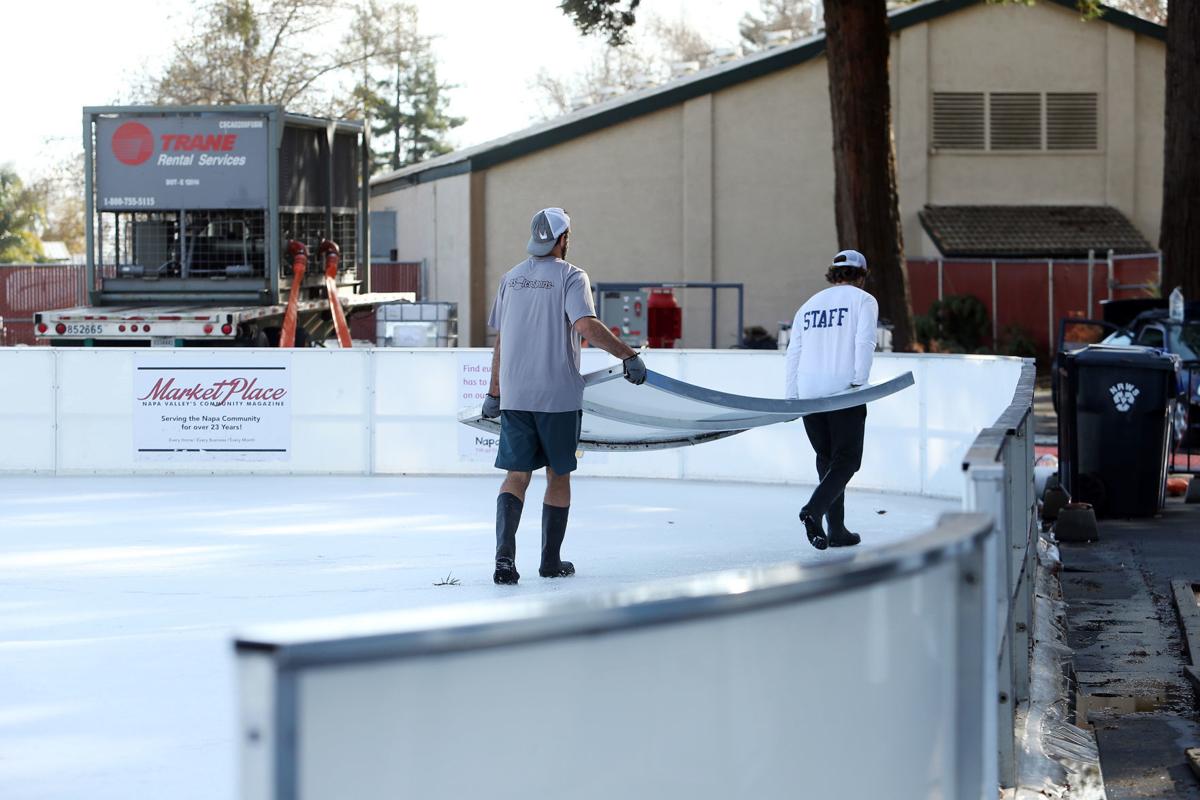 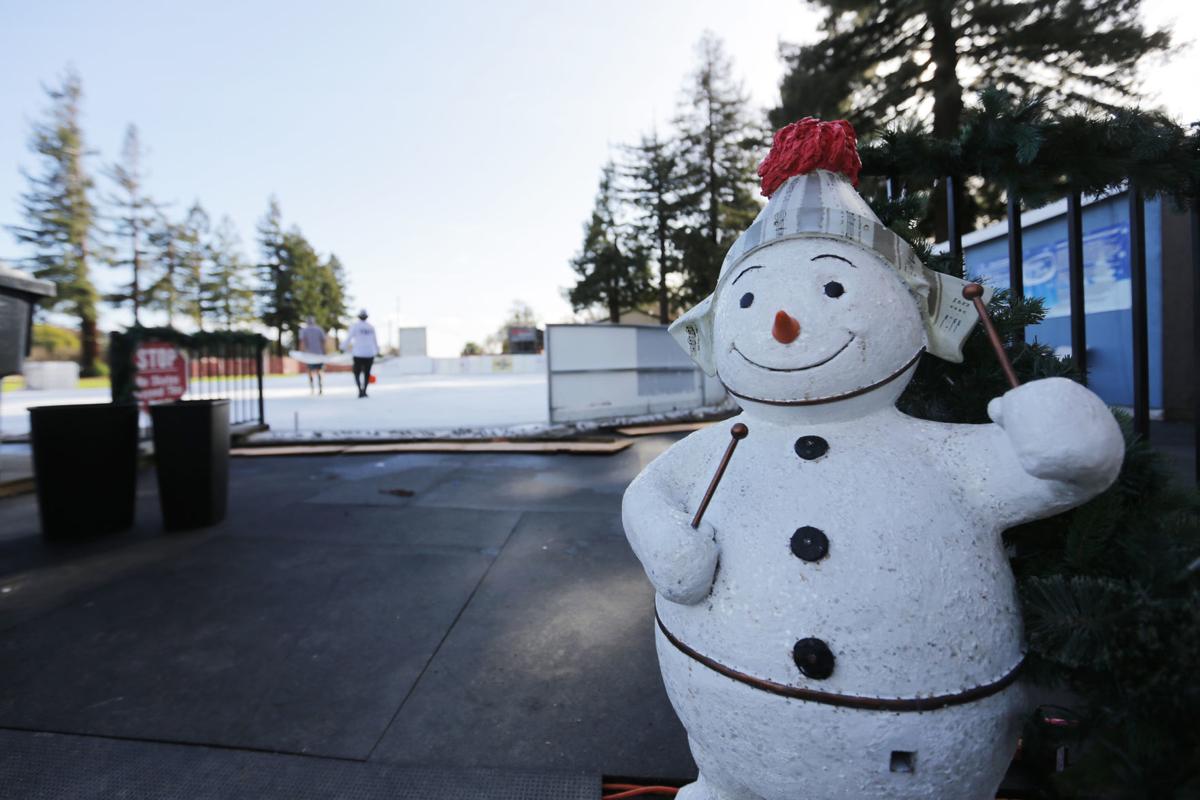 A snowman figure continued to stand at the entrance on Napa on Ice at the Expo on Tuesday, even as workers dismantled dasher boards and allowed the ice to melt at the seasonal skating rink two days after closing out its last season. 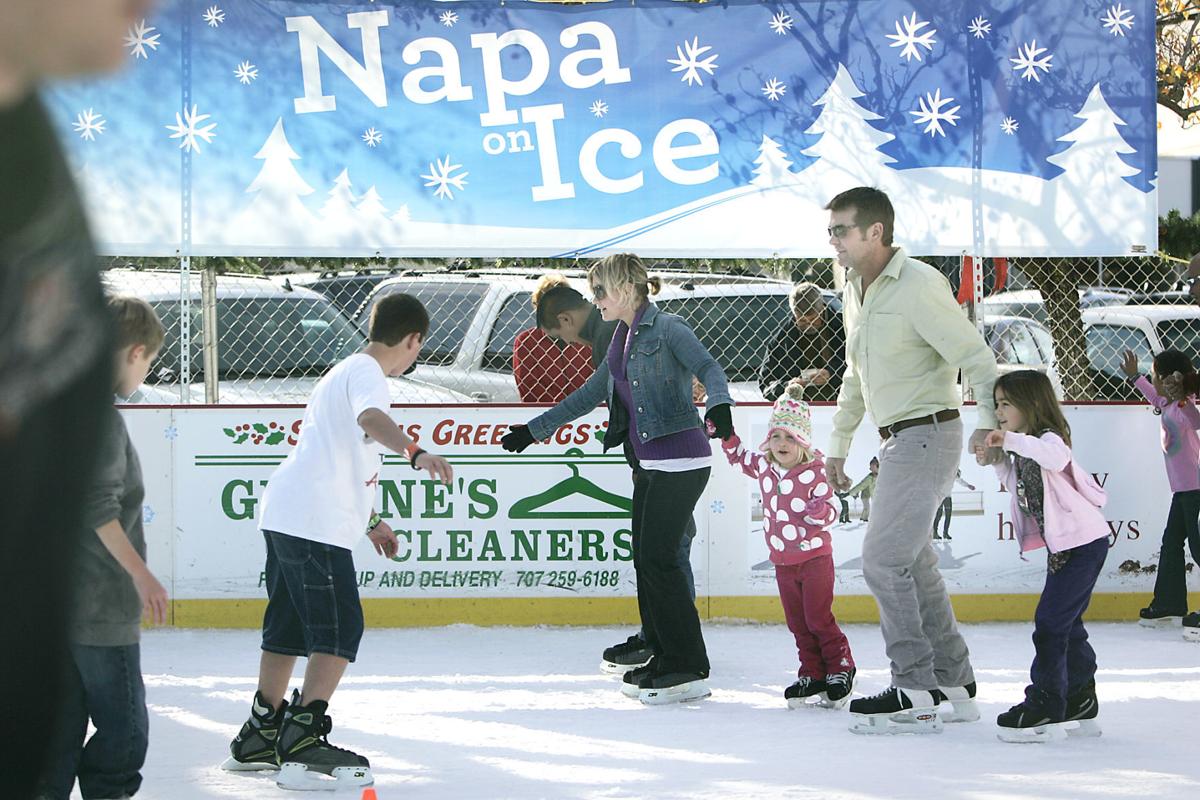 Napa on Ice debuted on downtown Second Street in November 2011 before relocating to the Napa Valley Expo. Peter Mott, founder of the seasonal skating rink, has announced the program will be discontinued after nine seasons, the last of which ended Sunday.

The end of Napa on Ice’s skating season on Sunday also marked the end of its nine-year run in the city.

After operating from November to January every year since the fall of 2011, Napa on Ice will not return for a 10th season, founding co-owner Peter Mott announced this week.

The skating program had operated at the Napa Valley Expo since 2015-16, after previously doing business at a city-owned parking lot on Second Street downtown.

Mott said the decision to wind down his Napa rink came together over the past month, after the program endured weather-related disruptions for a second consecutive season – heavy rains that dampened business during the normally busy Thanksgiving week. In November 2018, thick smoke from the devastating Camp Fire in Butte County held down early-season skating business as air-quality concerns shut down outdoor activities across much of the Napa Valley.

Demographics also were working against Napa on Ice’s long-term success, he added, pointing to a leveled-off population and high housing costs that have led to falling school enrollment – and likely fewer young people to frequent an ice rink.

Mott will continue his other winter-time skating operation, San Mateo on Ice, and is pursuing another seasonal rink in Fremont, an East Bay city with a larger population and wider potential customer base.

“We always operated in Napa, because that’s where we live and so the kids would have something to do,” said Mott, who also served 12 years on the Napa City Council. “It’s just not been financially successful compared to San Mateo, which does at least twice the revenue, if not more.”

Napa on Ice’s future at the Expo, where it had a year-to-year lease, appeared in doubt after the state-owned fairground’s board of directors in December approved the Napa Farmers Market’s move to the Third Street facility.

Ultimately, the Expo said the market could move into Zinfandel Hall during inclement weather, which would have allowed the skating rink to continue each winter.

The market, which operates on Saturdays year round, is scheduled to shift to the Expo from the South Napa Century Center’s parking lot on Saturday, Feb. 8, with customers asked to use the RV entrance on Silverado Trail. The Tuesday market will return in April.

Any future skating rink in Napa would require not only sufficient open space, but also ready access to 400 amps of power to run ice making equipment for two months, Mott said last month.

As the Expo ice sheet slowly continued melting on Tuesday and workers dismantled the dasher boards that formed its boundary, Mott expressed interest in lending advice – but not day-to-day leadership – to future businesspeople who might want to revive wintertime skating in Napa.

“We’ve had some discussions with some people who have reached out and said we may be interested someday if we can work details out,” he said. “If that’s the case, I could see us helping, but I don’t see us operating it. … We’ve done it nine years and we’ve enjoyed it, but it’s time to move on and, if anything, help someone else to do it.”

The Napa Farmers Market will move to the Third Street fairground starting in February.

Napa on Ice opened Sunday at the Expo for its ninth season, which will run daily through the Thanksgiving, Christmas and New Year’s holidays before closing Jan. 12.

Under bright, blue skies, Napa On Ice’s rink opened Saturday in downtown Napa with dozens of skaters strapping on their boots and stepping ont…

The lawyers for the tort claimants committee, which is representing victims in PG&E's bankruptcy, said an expert it hired found deteriorating transmission-tower hooks on a transmission line near the Camp Fire site.

A snowman figure continued to stand at the entrance on Napa on Ice at the Expo on Tuesday, even as workers dismantled dasher boards and allowed the ice to melt at the seasonal skating rink two days after closing out its last season.

Napa on Ice debuted on downtown Second Street in November 2011 before relocating to the Napa Valley Expo. Peter Mott, founder of the seasonal skating rink, has announced the program will be discontinued after nine seasons, the last of which ended Sunday.