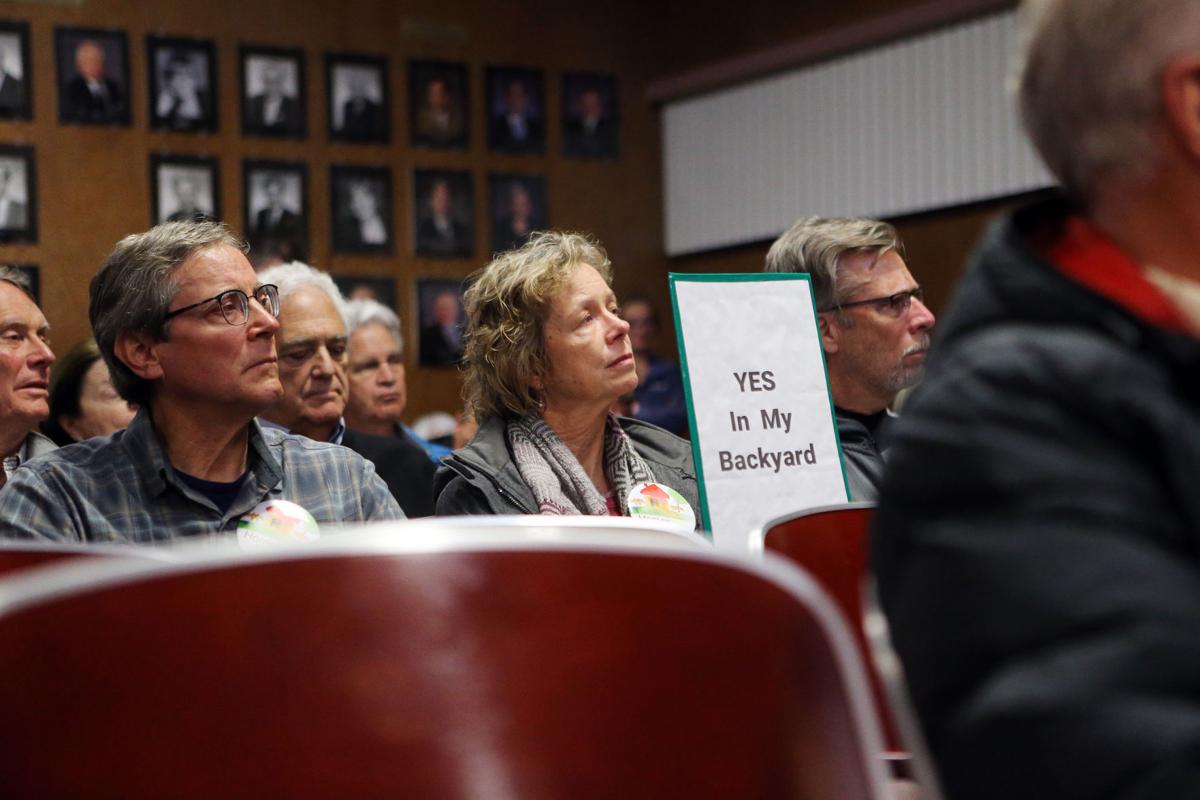 Supporters of Heritage House, an apartment development with 33 units for recently homeless tenants planned at the old Sunrise Assisted Living site, wore "Homes for All" buttons and displayed signs at Thursday's Planning Commission meeting. The commission endorsed the plan. The City Council is expected to vote on final approval in February. 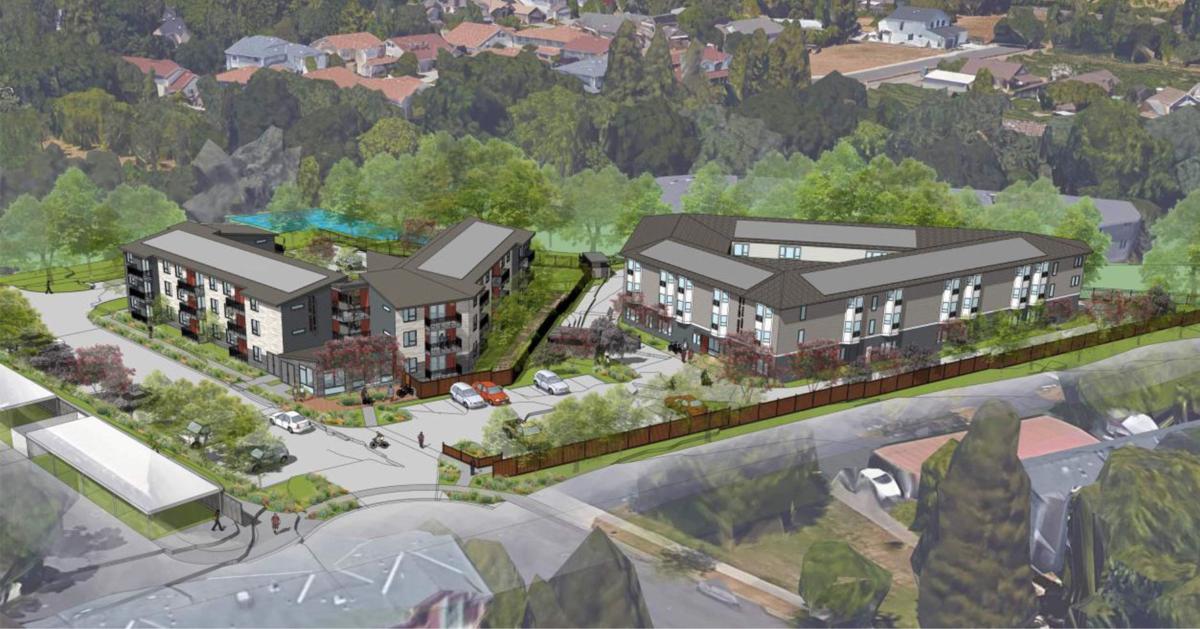 Supporters of Heritage House, an apartment development with 33 units for recently homeless tenants planned at the old Sunrise Assisted Living site, wore "Homes for All" buttons and displayed signs at Thursday's Planning Commission meeting. The commission endorsed the plan. The City Council is expected to vote on final approval in February.

Napa’s land-use authority heard out the fears of residents about a proposed apartment center for those recently on the streets – and then sided with supporters who said the housing complex can save people from sliding back into homelessness again.

Heritage House, which is to include 33 single-room units for formerly homeless or mentally ill tenants, gained the city Planning Commission’s endorsement Thursday night.

The project, which also will feature 57 other apartments for lower-income residents and incorporate the long-closed Sunrise Assisted Living retirement home building in north Napa, is expected to face an approval vote by the City Council on Feb. 4, according to Planning Manager Erin Morris.

Napans who have battled the housing plan for several months again arrived at City Hall in force, predicting those living nearby could be endangered by their new would-be neighbors. However, four commissioners (Gordon Huether was absent) all voted in Heritage House’s favor, acknowledging neighbors’ anxieties but supporting the project’s goals.

“There’s a lot of fear of the unknown, and then something transpires, and then it becomes a part of our community,” Commissioner Paul Kelley told an audience that filled the City Hall chamber, referring to similar neighbor pushback against Project Nightingale, a post-hospital convalescent center for homeless patients that opened inside a former Jefferson Street yoga studio in 2017, two years after winning city approval.

While conceding that Heritage House’s backers could have “rolled out (the plan) in a better fashion,” Kelley urged neighbors to try to put themselves in the shoes of those who might have no other place in town to call home. “What if it was a former neighbor?” he asked. “What if it was a woman with a child? What if it was an elder person?”

The vote in favor of Heritage House followed more than 2 ½ hours of dueling testimony in which various homeowners shared their fear of misbehavior or even violence by clients or their acquaintances.

But in a departure from previous city meetings on the topic, a sizable bloc of speakers sporting “Homes for All” buttons – including many with ties to local social service and housing groups – spoke out in the project’s support, arguing that other efforts to help Napa’s most vulnerable people will be futile without first providing them a safe space.

A few of Heritage House’s allies went further, sharing stories of enduring homelessness and addiction or watching loved ones struggle.

“My son had a hard life, and if he had had housing, he might have made it,” Mary Stephenson, president of the Our Town St. Helena housing advocacy group, said of a child who suffered from bipolar disorder and methamphetamine addiction while spending time at Napa State Hospital and the county jail. “But he died at 25, living on the streets of Napa, and I don’t think we should let that happen again.”

Jointly organized by Santa Rosa-based Burbank Housing Corp. and Napa County’s homeless outreach contractor Abode Services, the apartment complex at 3700 Valle Verde Drive may become Napa’s largest step toward a housing-first model that makes safe shelter – getting vulnerable people under a roof and then offering them social services organized by Abode staff – a top priority for those aiding the homeless community.

The vacant shell of the three-story Sunrise senior home, which closed in 2004, would be remodeled into Heritage House, containing 58 single-room-occupancy rooms and eight one-bedroom apartments. Twenty-five SROs along with the apartments are to be offered to renters earning less than the local median income, with the remaining single rooms set aside for people emerging from homelessness.

However, it was the presence of the 33 supportive-housing units that aroused resistance by neighborhood foes, who questioned Abode’s ability to ensure good behavior at the home.

Opponents pointed to a requirement of California’s No Place Like Home program – which allots state bond revenue to help cities house their long-term homeless – that allows tenants at such facilities to stay “regardless of sobriety, participation in services or treatment, history of incarceration, credit, or history of eviction.” Heritage House has been awarded $7.9 million from the state fund, more than a quarter of its $28.5 million budget.

Without a requirement for tenants to stay sober or take part in counseling or treatment, “when you combine mental illness with drug and alcohol abuse, I really wonder how safe our neighbors will be for our kids and older folks,” Lisa Reifers told the commission.

Like several other speakers, Reifers declared those in the neighborhood are not trying to shut homeless people out of Napa but to move their housing and treatment to a more appropriate part of the city. “Our concern is not with the project itself, but the location they propose to put it in,” she said, echoing others who said Heritage House will be too far from support services based at Napa County Health and Human Services, a 6-mile bus ride south.

Even with such conditions on state funding, Burbank Housing’s chief executive Larry Florin replied that those seeking supportive housing will still go through the same evaluation and screening as all other homeless or at-risk people entering Abode’s service network. Furthermore, clients must sign leases before moving into Heritage House and then comply with its ground rules, or face a three-day notice of eviction.

“It is the policy of Burbank Housing to deny admission to applicants whose tenancy may reasonably be expected to have a detrimental effect on the operations of the project, the health and safety of other residents or quality of life for the residents or the community,” the statement reads.

Plans filed with the city call for a full-time resident manager at Heritage House, along with security staffing, surveillance cameras and key-card access. At the suggestion of Commissioner Michael Murray, planners changed a clause guaranteeing the presence on-site security workers and 24-hour front-desk staff to remove references to a one-year “transition period,” leaving no time limit on the requirement.

Scattered amid the worries of crime, litter and loitering around a supportive housing center were complaints from other foes, who questioned whether Heritage House’s design will properly account for erosion along nearby Salvador Creek and avoid damaging fish habitats. The line of attack recalled the lengthy fight against the Napa Creekside Apartments, a 57-unit affordable rental project canceled by its developer in 2016 after residents successfully sued to block construction without a more stringent environmental study.

Nonetheless, some speakers urged Napa leaders not to lose sight of the hurdles faced by the city’s disadvantaged people, even in the face of neighbor resistance.

“I’m saddened that we have to be here doing this when this project should have been approved a long time ago,” said Bill Chadwick, a veterans’ advocate for the Napa Housing Coalition. “… I think this should be the deciding factor: The neighbors are here for themselves; the rest of us are here for the community.”

“I feel like we have that opportunity. It’s going to be new, it’s going to be different, it’s going to be scary, and yes, the neighbors, you’ve been asked to shoulder a little more than the rest of the community,” he told the audience. “All we’re asking is for you to give it a chance.”