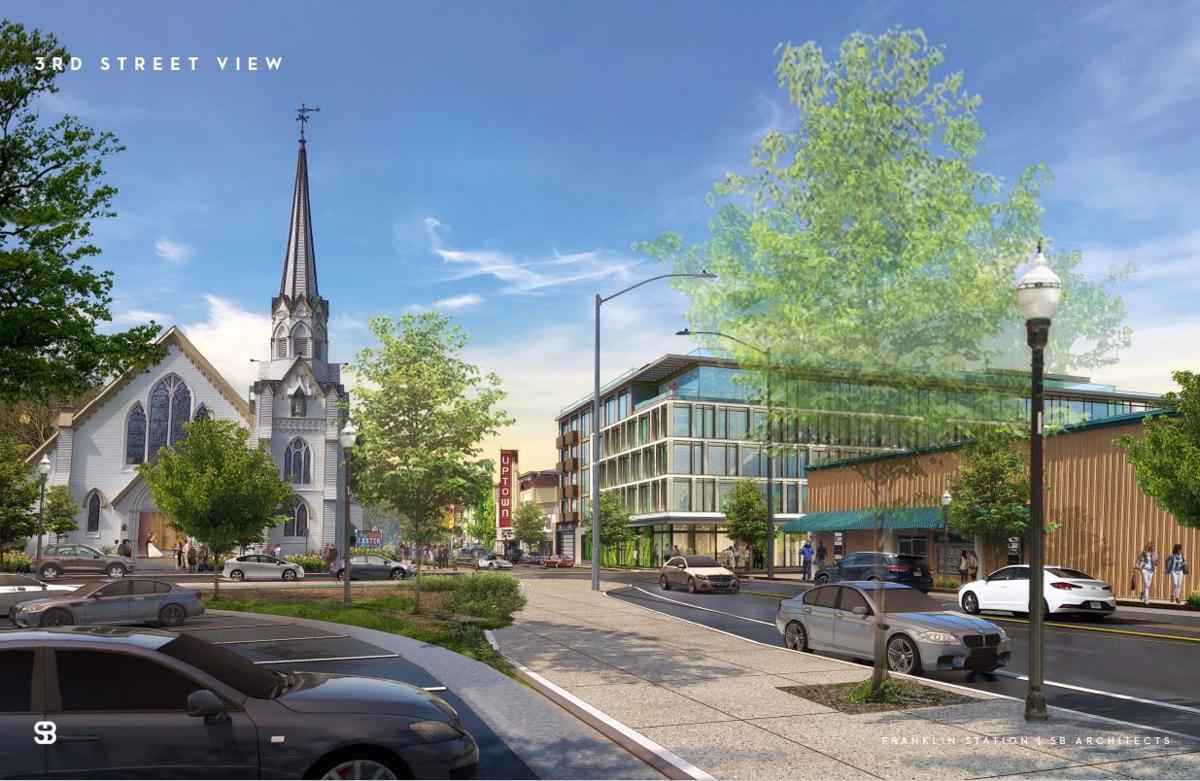 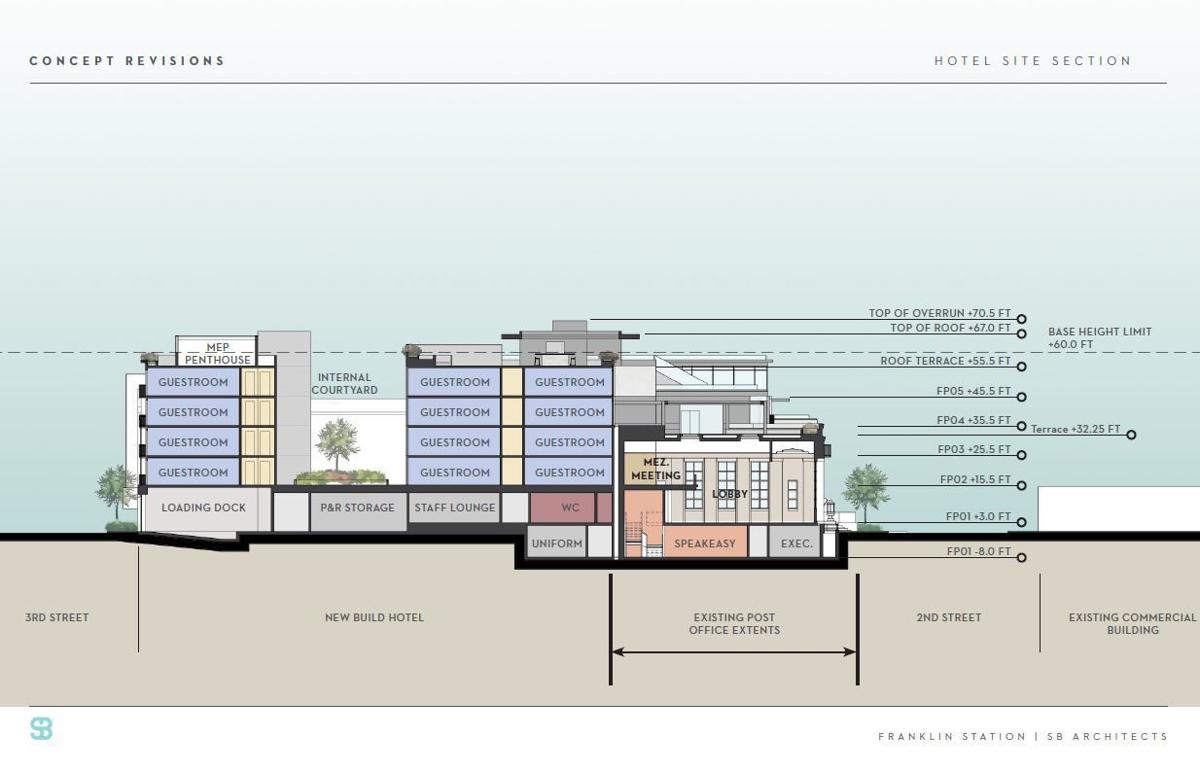 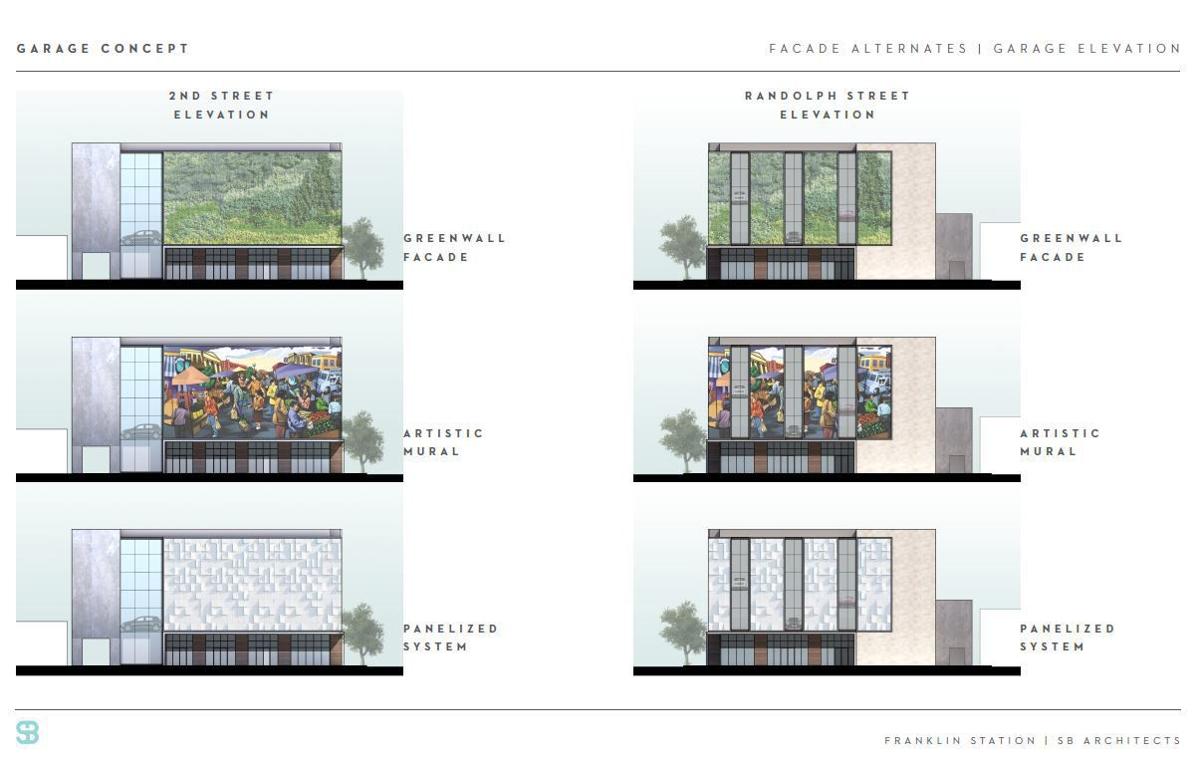 Ever since Napa’s historic downtown post office permanently closed after the 2014 earthquake, locals have wondered what redevelopment of the now-empty building would look like.

Designs for a five-story, modern hotel structure, one that wraps around the 1930s-era building, have been submitted to the city’s planning department.

“I think that our team has absolutely blown it out of the park,” said Jim Keller, co-developer of the Franklin Street hotel project. “It’s beyond what I was even expecting, and my expectations were high. I’m extremely proud.”

Plans call for a 175,000-square-foot, 163-key hotel using the site of the former post office and adjacent land where Zeller’s Ace Hardware now operates. A five-story parking garage would be built at the southeast corner of Second and Randolph streets, a corner now used for surface parking.

The project will cost more than $100 million, Keller said.

Keller and partners Cypress Equities, based in Dallas, will present their plans to the Planning Commission for a preliminary review on Thursday.

In scale and contemporary design, the proposal evokes the new five-story Archer Hotel on First Street that wraps around elements of the Merrill’s drugstore building.

Keller, a Napa developer, bought the post office building in 2017 for $2 million.

Keller has since purchased the city parking lot across the street. He also has an agreement to acquire the Zeller Ace Hardware property behind the post office.

The hotel’s footprint will take over much of the block along Second between Franklin and Randolph streets, and along Randolph between Second and Third streets. The Napa City Council granted a rezoning and a building agreement in November 2018.

The proposed design includes underground space and three rooftop terraces. Because the top of the property would extend to 70.5 feet, the project will need permission to exceed the normal 60-foot height limit.

Keller said the group is having “solid conversations” with representatives from the Montage Hotels’ Pendry brand as the potential hotel operator.

“They are an ambitious hotel operator,” said Keller. “I think that’s what downtown needs.”

The Napa hotel will be a four-and-a-half star property, Keller said. “The amenities will be top notch with over-the-top service. All of the amenities and fits and finishes will be another level.”

Parking space for hotel visitors would be provided by an automated garage to be built at 1251 Second St. The mechanical parking structure would hold 228 vehicles, with 65 slots set aside for the public, and include 7,000 square feet of retail space.

Keller said one “huge advantage” that helped attract interest from Cypress was the fact that the property is within downtown Napa’s newly designated opportunity zone.

Under the 2017 federal tax law, people or developers can get a tax break for investing in certain businesses and properties located in such zones.

“It helps us take the project to another level,” said Keller of the Cypress investment.

The hotel project at the post office was never a sure thing. After the 2014 earthquake, the USPS originally moved to demolish the damaged post office building, which was built in the Art Deco style.

The Napa Franklin Station was built in 1933 with funding from the federal Public Works Administration. In 1985, it was placed on the National Register of Historic Places.

After considerable public outcry, the USPS decided to try selling it to a buyer who could repair the structure and preserve its architectural integrity.

The downtown post office is now located at 1436 Second St.

“Our company has been active in the Bay Area and we are excited to once again have that opportunity,” said Glenn Miller, portfolio marketing director with Cypress Equities.

The closest other Cypress project to Napa is the 6x6 complex on Market Street in San Francisco. That five-story project was completed in 2016 but has yet to be tenanted.

Should downtown Napa’s post office remain where it’s currently located — at the corner of School and Second streets, across from Napa City Hal…

The U.S. Postal Service will hold a public meeting to discuss plans for a suitable long-term space for retail services in central Napa.

Age, neglect and obsolescence are the usual nemeses of historic buildings. But a Napa landmark has landed on the unenviable top spot of a loca…

Napa’s two post office buildings remain closed after being badly damaged by Sunday’s earthquake, while customers are being served out of a par…

Because of earthquake damage to the post office in downtown Napa on Second Street, the U.S. Postal Service has moved counter operations to its…