This is the facade of the hotel proposed for Soscol Avenue. The hotel and adjacent apartments would be located on the site of a car barn built early in the 20th century for the Vallejo, Benicia & Napa Valley Railroad. 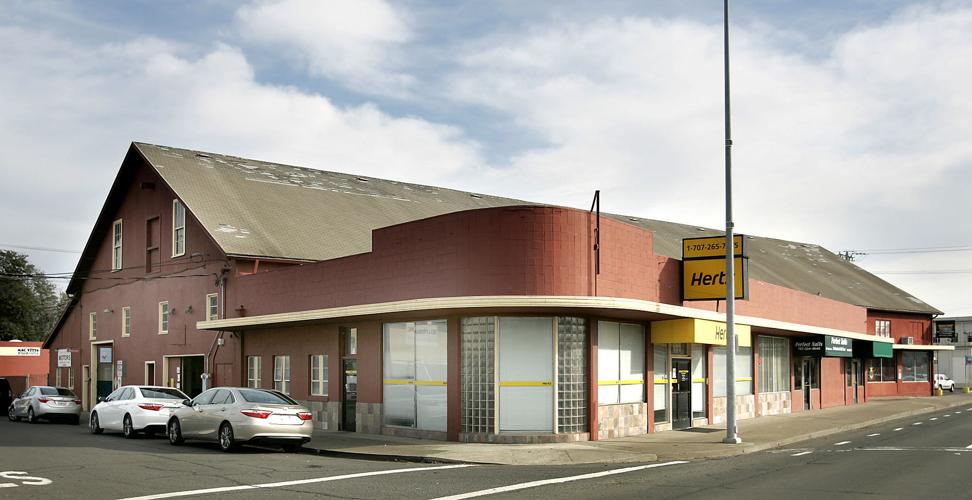 The owner of this building, located at Soscol Avenue and Sixth Street, has filed an application to develop the property into a mixed-use project. The long building with the peaked roof was once a barn for an electric railroad.

Napa’s planners find themselves agreeing on the merits of a housing hub near the city’s heart, closer to stores, jobs and transportation. Whether the site of a century-old railroad barn can – or should – become that hub remains to be seen.

A plan to redevelop the former car barn and repair shop of the Vallejo, Benicia & Napa Valley Railroad got its first hearing Thursday night before the city Planning Commission. While officials began grappling with the design and audience for the project – a four-story combination of apartments, a hotel, restaurant and underground parking – the property’s possible historic status hung over the debate as to whether the rail building is the best place for a densely packed development.

In a letter released before the discussion, Napa County Landmarks urged the city to wait on any plans that could remove or alter the building, one of the few remaining traces of early 20th-century rail travel in the valley.

“Evaluating design of a replacement project is premature due to the potentially significant impact on cultural resources caused by demolition of the structures on the site,” Landmarks president Ernest Schlobohm wrote of the site, which is not listed as a historic city resource but is eligible for listing. He called on planners to first study the car barn’s historic properties, and to consider rehabilitation rather than tearing it down.

Built in 1905 for the electric railroad, the brick-red, peaked-roof commercial building occupies a block marked by Soscol Avenue and Sixth, Seventh and Burnell streets, near the city’s transit center. A smoke shop and auto-related businesses occupy the car barn and its additions, which have remained since the rail line’s dissolution in 1935.

But a preliminary application filed by the site owner, Peter Dwares, would transform the property into an urban-style mixed-use block.

Seventy-two apartments would fill a four-story building on Burnell Street, with studios and one-bedroom dwellings over a ground floor of live-work units. The project also features a “boutique” four-story, 108-room hotel facing Soscol and the Napa River, a 9,500-square-foot restaurant and a rooftop dining area. An underground parking area would hold up to 216 vehicles, 191 of them in an automated carousel to save space.

In discussing their pre-application last month, Dwares and his consultant, Stephen Cuddy of Napa Design Partners, declared their mixed-use development will boost the city’s tight housing supply, and encourage more walking and less driving to businesses downtown and along Soscol Avenue.

But the prospect of a radical makeover – and the baldly contemporary architecture of metal, glass and stone shown in concept drawings – caused immediate unease among preservation groups, who feared losing the city’s largest link to its rail-driven past. (Dwares has proposed to salvage materials from the current building, and to create a mural facing Soscol Avenue honoring the county’s electric rail system of the early 20th century.)

Planning commissioners freely admitted the rail car barn’s historic background could take a decision on its future out of their hands, and into those of the Cultural Heritage Commission. Still, they threw their support behind the idea of creating homes near downtown – though not necessarily in the same place or to the same design.

“I don’t know if this is the best place for it, because of the historic issue, but this seems to me the highest and best use for this property,” said Commissioner Gordon Huether. He also said the smaller housing units would be a boon to local employees struggling with high Napa rents. “… If you’re a service worker, you should be able to live in a clean, well-lit, beautiful place, like everybody else.”

Though the project’s architecture struck Huether as “a little Emeryville, a little brutal to me,” he favored a clean-sheet design to a modification of the rail car shed, which he said would dilute its historic merit even more. “You cannot get even half, even a third of the density if you have to incorporate the barn,” he said.

Other commissioners also saw promise in the development – if its other uses benefit future tenants.

“This concept is very interesting and needed in the community. But my question is, ‘Do we need a hotel?’” said Michael Murray, suggesting a first-floor grocery would prove far more useful to future tenants – and make the area even more walkable.

While Paul Kelley said the property can support an apartment complex, the rail shed’s historic character also can live on – perhaps by transforming the structure into a market space or a collection of stores.

“If that building were re-energized as a public space, I’d take the apartment project and marry them on the site,” he suggested. “… In my mind, mixed use is not a hotel and an apartment; it has to have a product that residents can utilize. You’re not going to walk 200 feet to stay overnight.”

If Napa proves unable to overhaul the rail car property, it still has other ways to meet its goal of bringing homes to Soscol Avenue and closer to jobs in the area, said Planning Manager Ken MacNab.

“I would agree there are other opportunities for development of this density; this isn’t the only site,” he told commissioners. “We’ll see how the historic review process goes. It may turn out that this resource is more important than getting this one site developed, but we have other sites.”

No timetable has been announced for financing or designing the project, and Dwares has said existing business leases will stay in place for now.

Howard Yune became the Register's city editor in September 2022. He has been a staff reporter and photographer since 2011, and previously wrote for the Marysville Appeal-Democrat, Anaheim Bulletin and Coos Bay (Oregon) World.

If the owner gets his way, a Soscol Avenue building that once supported Napa’s electric railway could become part of a proposed hotel and apar…

The line of royal succession explained with new baby news

‘Like nothing we’ve seen before’: UK’s new poor forced to turn to food banks

‘Like nothing we’ve seen before’: UK’s new poor forced to turn to food banks

This is the facade of the hotel proposed for Soscol Avenue. The hotel and adjacent apartments would be located on the site of a car barn built early in the 20th century for the Vallejo, Benicia & Napa Valley Railroad.

The owner of this building, located at Soscol Avenue and Sixth Street, has filed an application to develop the property into a mixed-use project. The long building with the peaked roof was once a barn for an electric railroad.