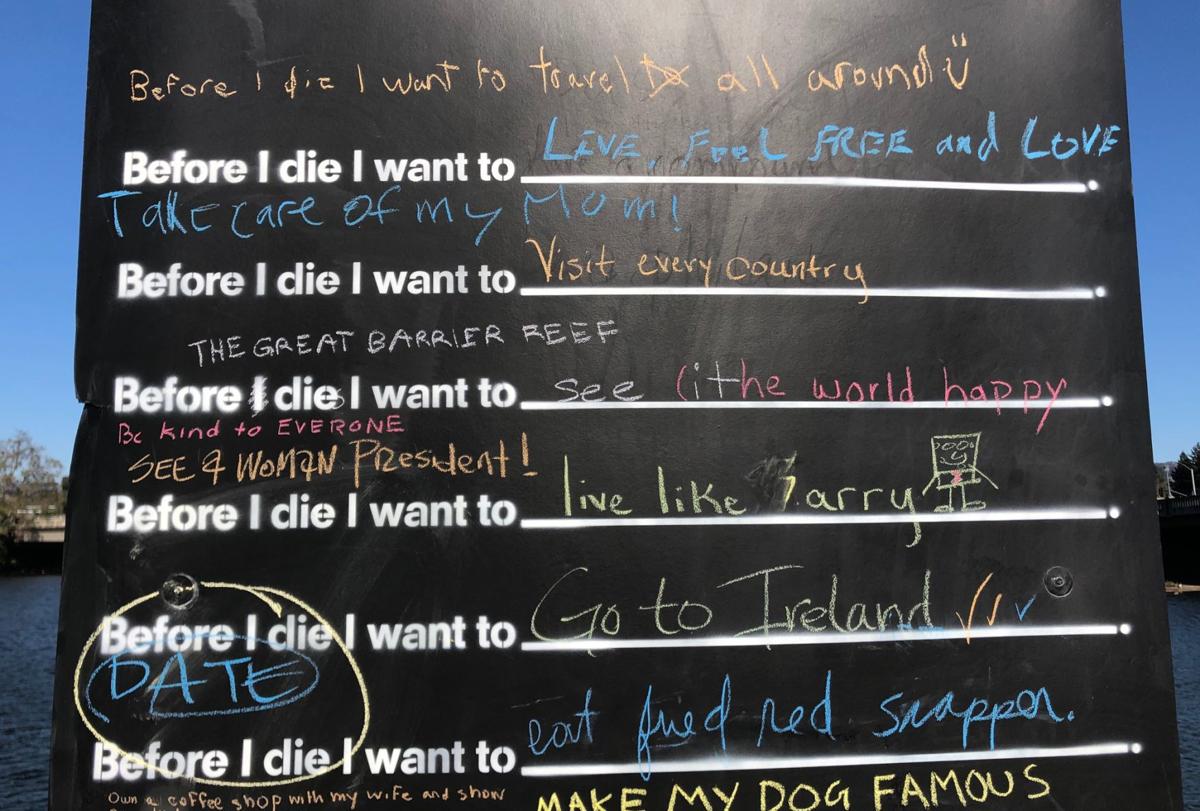 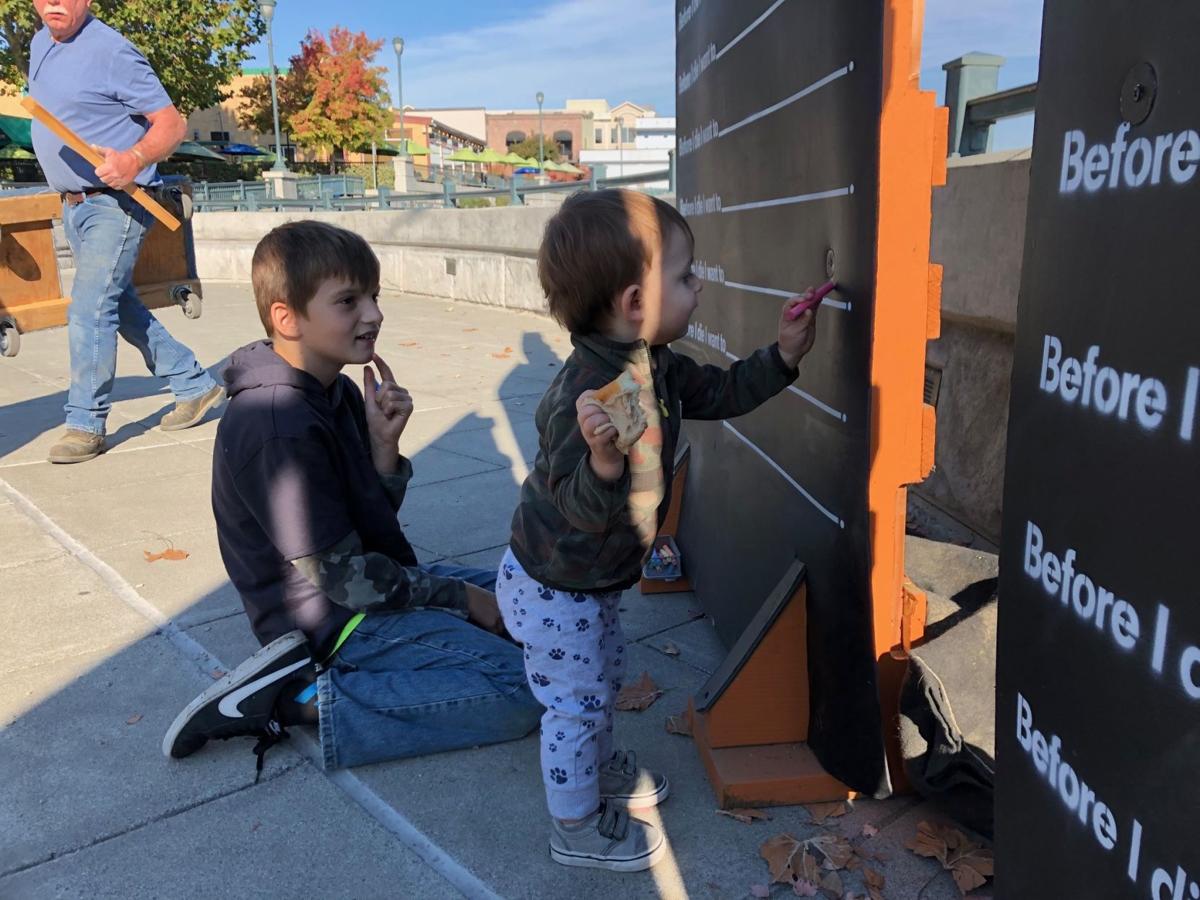 Brothers Gabriel, left, and Jaxson Alves broke in the Before I Die project installation on Saturday morning. 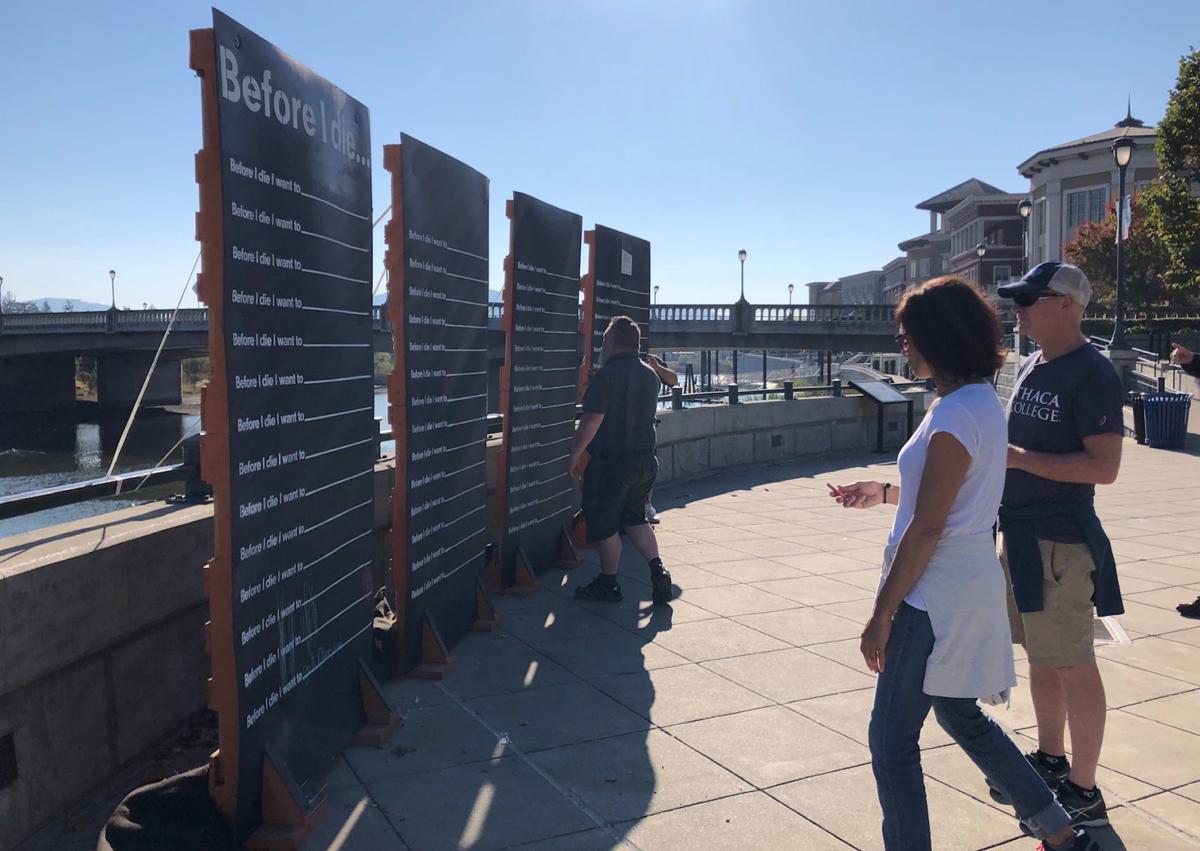 A couple considers what they want to do before dying after approaching the Before I Die project in downtown Napa. 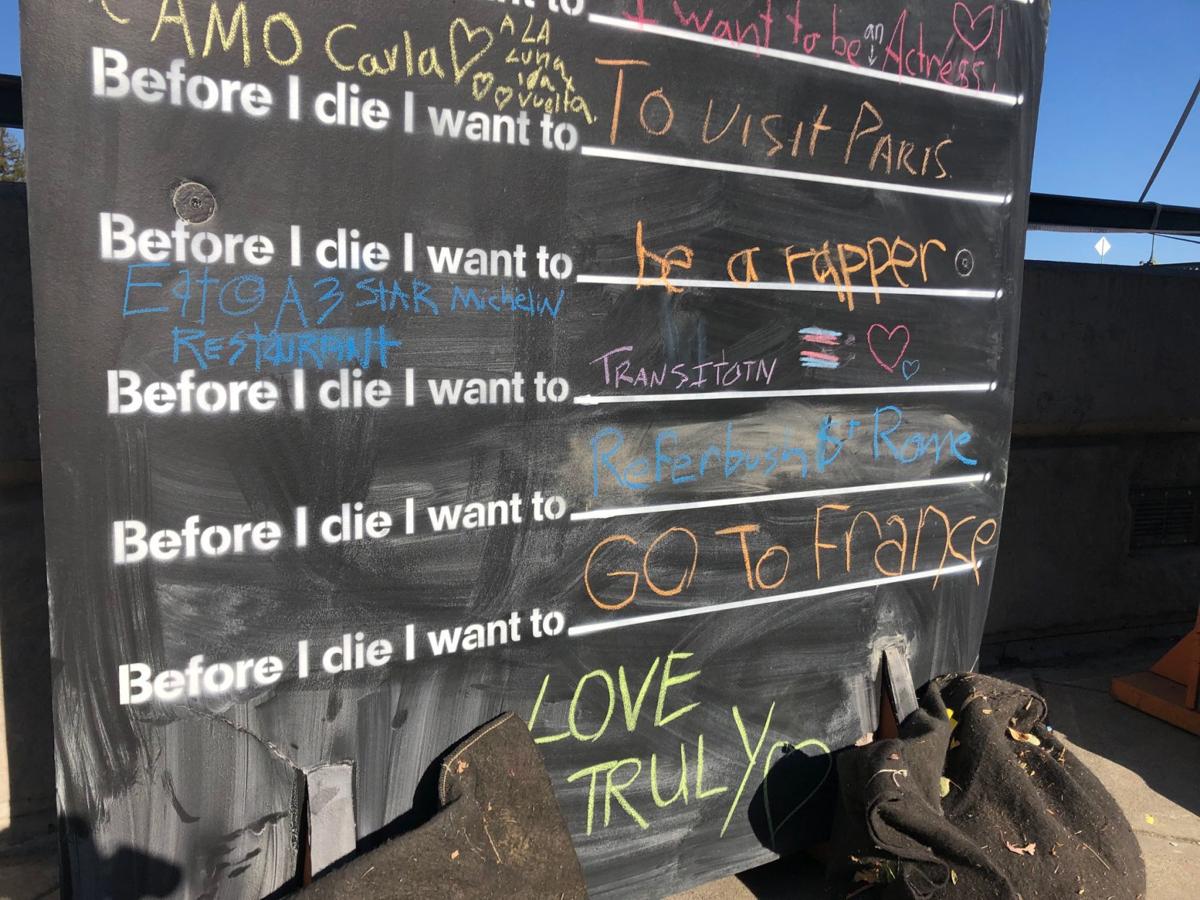 An art installation that debuted in late October in downtown Napa seeks to encourage people to reflect on what they most want to do before they die.

The Before I Die project was born in New Orleans after artist Candy Chang suddenly lost a loved one who died without doing many of the things she had wanted to do. Chang painted the wall of an abandoned corner house with chalkboard paint and used a stencil to paint “Before I die I want to” across the home. Passersby filled in the sentence with their own personal goals, such as “inspire my children,” “see equality,” and “swim w/out holding my nose.”

It’s since spread to more than 5,000 walls in 78 countries, according to the project. Now the Napa Valley Center for Spiritual Living, Collabria Hospice and the City of Napa have partnered to bring three standalone Before I Die panels to Veterans Memorial Park on Main Street.

“I came across this project and I thought ‘This is something that really needs to happen in Napa,’” said Robert Hayes, Collabria marketing and communications manager.

It turned out that Napa Valley Center for Spiritual Living was a few weeks ahead of him. Hayes learned they had already constructed the panels, so the organizations decided to partner on the project. The City was supportive of the public art aspect of the project, Hayes said.

Before I Die forces people to reflect on their lives — be it silly or profound, he said. He recalled seeing people share that they wanted to grow taller than 5-feet, 2 inches tall, finish a divorce and see a daughter graduate high school.

“We’re all so busy,” he said. “It’s sometimes rare in a day that you get to stop and think about it.”

The panels were first set up last Saturday morning, though one was discovered vandalized with expletives Monday morning and removed, Hayes said. That panel will be replaced and a fifth will be added in Spanish.

Even as the panels were put in place Saturday, the installation drew questions from passersby. A couple wrote that they wanted to learn to play the ʻukulele and bikepack across the country. It didn’t take long before Napa brothers Gabriel, 9, and Jaxson, 1, Alves stepped up.

Gabriel wrote that he wanted to go to Disneyland.

It would also be nice to have a dog, preferably a beagle, Gabriel said.

Jaxson scribbled on the wall.

“You got a long time, buddy,” Gabriel said to his brother.

The panels will soon be headed to St. Helena, where they’ll be displayed outside of Vasconi’s Pharmacy. Collabria may look to make a more permanent version of the project if it’s successful, Hayes said.

Learning to read English? There's a Napa-produced newspaper just for you.

Coming to events near you: The Napa library's new 'bike branch'

For what's new at the Napa County Library, you can now check out the 'bike branch.'

Brothers Gabriel, left, and Jaxson Alves broke in the Before I Die project installation on Saturday morning.

A couple considers what they want to do before dying after approaching the Before I Die project in downtown Napa.