Be Kind marchers start off the march by heading out of Yountville Veterans Memorial Park and to the Napa Valley Museum. 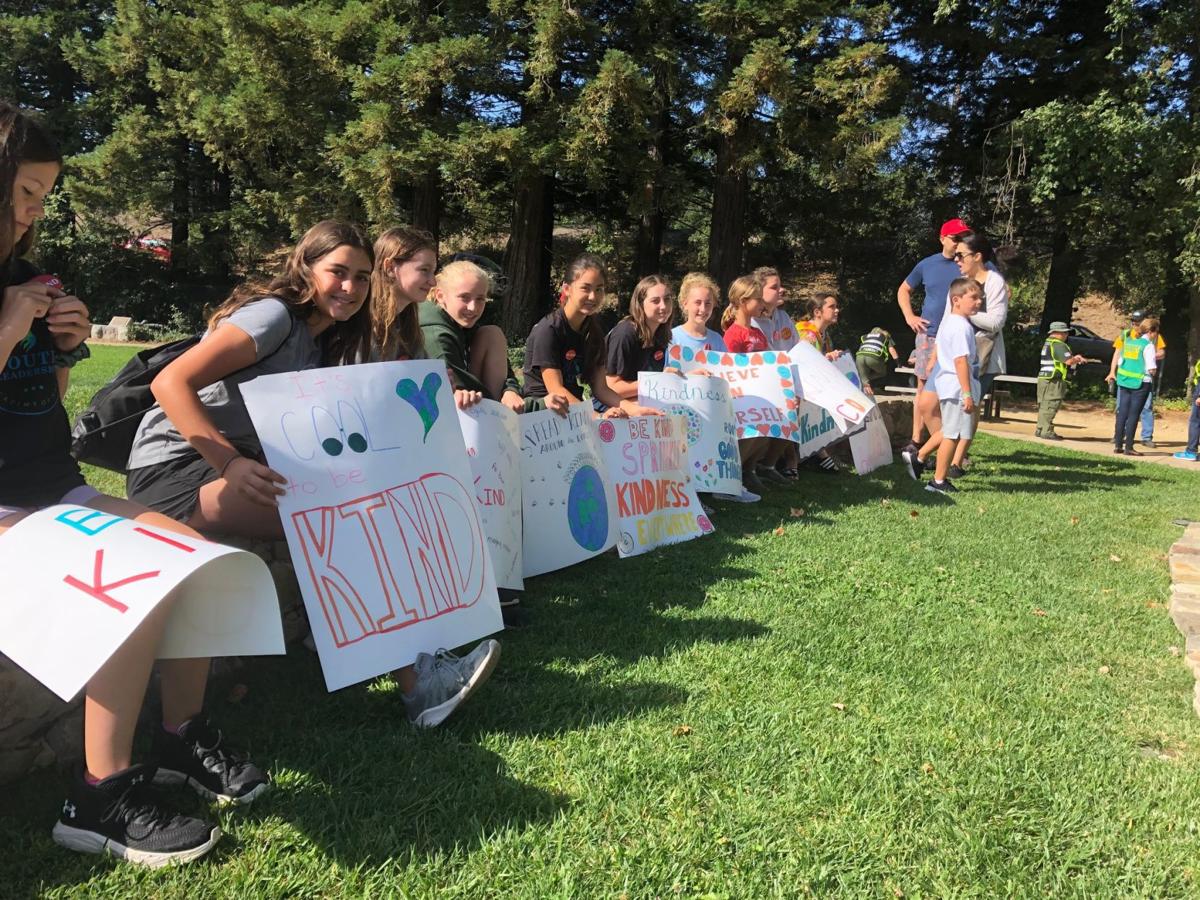 Kids show off their posters for the third annual Be Kind Walk in Yountville. 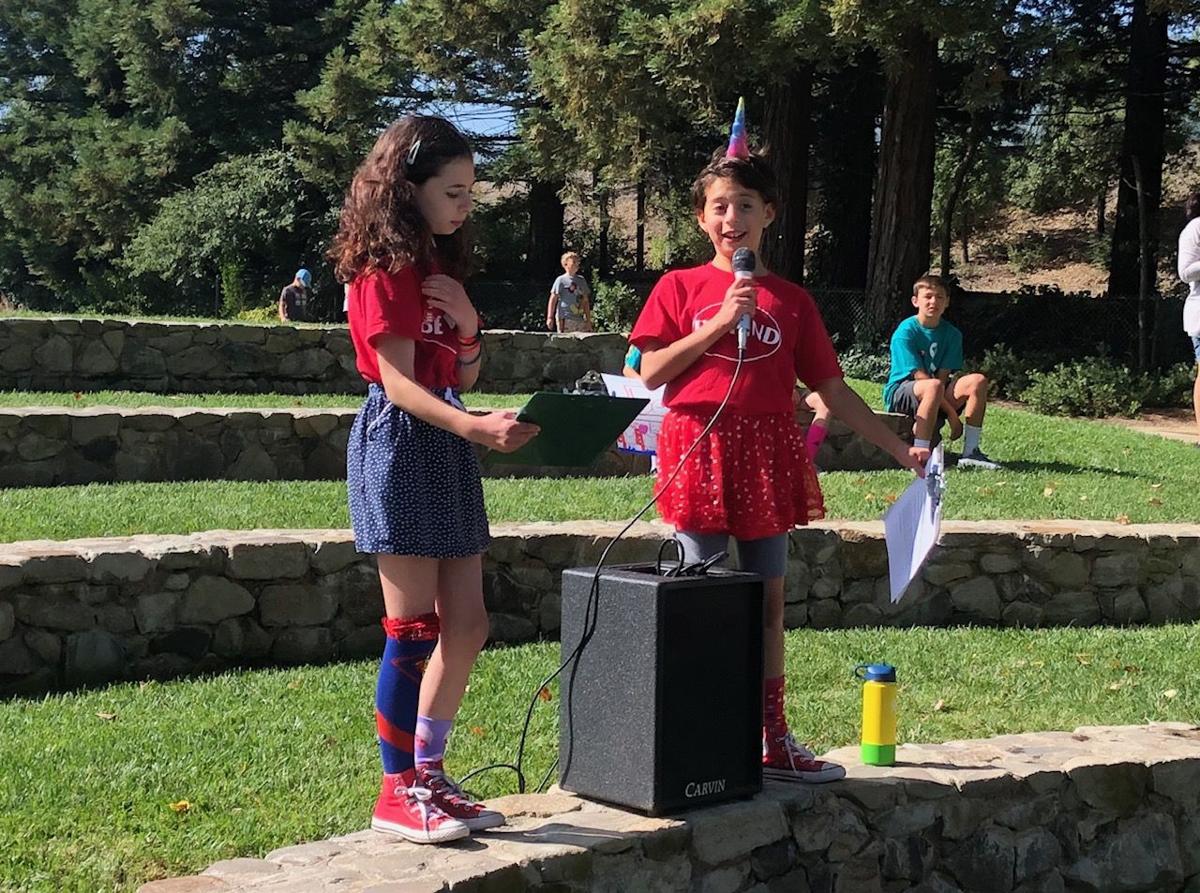 Sisters Talulah, left, and Ruby Finkelstein address the crowd at their Be Kind Walk in Yountville. 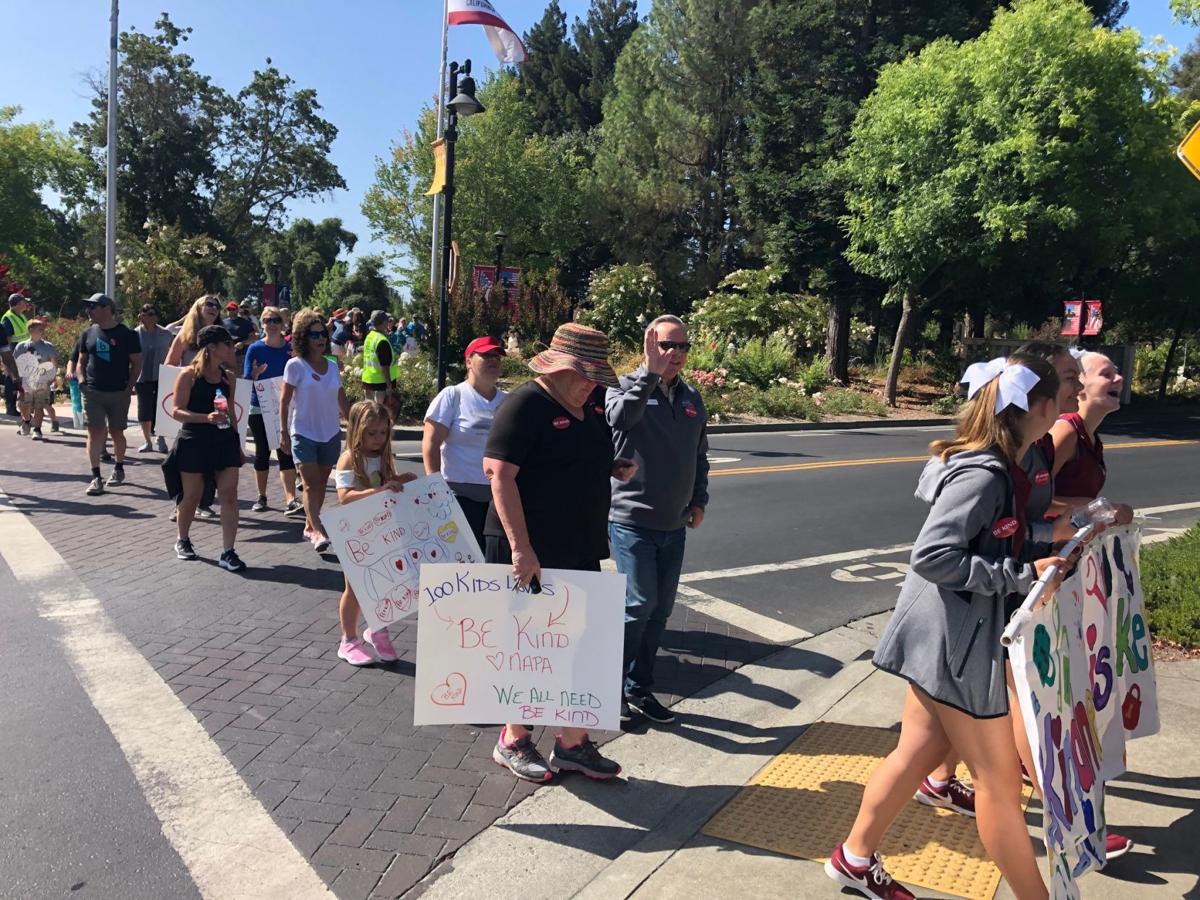 Hundreds showed up in Yountville on Saturday morning to encourage positivity at the Be Kind Walk.

Be Kind marchers start off the march by heading out of Yountville Veterans Memorial Park and to the Napa Valley Museum.

Kids show off their posters for the third annual Be Kind Walk in Yountville.

Sisters Talulah, left, and Ruby Finkelstein address the crowd at their Be Kind Walk in Yountville.

Hundreds showed up in Yountville on Saturday morning to encourage positivity at the Be Kind Walk.

YOUNTVILLE — Napa’s Finkelstein sisters were back in Yountville Saturday for their third annual Be Kind Walk to celebrate positivity and youth-oriented Napa Valley organizations that share their mission of making the community a kinder place.

Though Talulah, 12, and Ruby, 9, have been passing out red, oval “Be Kind” buttons and leading a march through Yountville for the past few years, it’s the first year they’ve recognized other local organizations that are kid-led or serve kids: The Alaina’s Voice Foundation, 100 Kids Who Care, The Hero Foundation, The God is Good Group, Team Rescue, Napa Valley Kid, Napa County Kids Care, Teens Connect and VOICES.

“We want people in our community to think about those other kind organizations,” Ruby said as supporters began to filter in to the Yountville Veterans Memorial Park.

The Finkelstein sisters were dressed in matching red “Be Kind” T-shirts and high-top sneakers, and wore glitter on their faces. They spoke excitedly about the walk and upcoming plans for their Be Kind movement, which drew an estimated 300 supporters to Saturday’s event.

It all started when a friend in New York began handing out “Be Kind” buttons. The Finkelsteins brought the idea to Napa and noticed strangers donning the buttons within six weeks.

The first event was dreamt up during a seven-hour car ride on the way home to Napa from Los Angeles, said father Judd Finkelstein.

“A lot of it came back to ice cream,” he said. “But there was a lot of community-mindedness as well.”

Now, 15,000 buttons later, the Finkelstein sisters are looking to expand their movement.

“I’ve been observing people,” Talulah said. “I kind of see what our community could improve on, you know, in the kindness realm.”

So Kindness Kids was born. Once a month, school-aged kids meet to brainstorm community service projects they can take on, Talulah said. A speaker is invited, too, Judd added.

In the fall, they held a coat drive for fire victims that was so successful, they couldn’t stuff all of their donations in a single car, Judd said. The Kindness Kids cooked free meals for Napa’s The Table program and throw birthday parties for homeless kids.

Talulah and Ruby don’t even see the end result, their father said, because they don’t want to hang around and make the kids feel self-conscious. They just solicit donations via a Be Kind email list for party supplies and other essentials.

For the last couple of parties, the checklist has been filled in 25 minutes, Judd said.

Judd got goosebumps talking about his pride for his daughters.

Their mother, Holly, was just as proud of how Be Kind has grown. Talulah and Ruby have even helped kids in Chicago and Seattle start their own local Be Kind chapters. Children are the future, she said.

Be Kind has been so successful because it’s something everyone, of all ages and backgrounds, can get behind, she said. There’s no other agenda.

“It’s been amazing because it’s been so organic,” Holly said.

As the crowd began to grow, supporters began to show up with posters made days before at a Napa Silverados baseball game. When the time came, the Finkelstein sisters greeted the crowd.

John Dunbar, mayor of Yountville, was the first speaker at the event. He thanked the girls for holding their event in his town.

“We need (kindness) more than ever,” he said.

“Thank you so much,” Talulah said. “That was so kind.”

Napa Councilmember Liz Alessio took the stage next to share Be Kind’s accomplishment and urge the importance of showing kindness to neighbors, strangers, vulnerable people and yourself.

“Be kind — how simple, how poetic, how beautiful,” she said. “There is so much pain, doubt and fear in the world.”

Ruby asked the crowd to momentarily close their eyes and let Alessio’s words sink in.

“That was just beautiful,” Ruby said.

U.S. Rep. Mike Thompson spoke of how the Napa Valley is emblematic of kindness and the importance of bringing the community together.

“The apple doesn’t fall far from the tree,” he said, with a nod to Holly and Judd. “I can say the same thing about grandma.”

Thompson handed out awards to representatives of each of the nine groups who were honored at the event.

“It’s really making this year special for us,” Talulah said.

Napa County Supervisor Brad Wagenknecht, wearing a “Be Kind” shirt, took the stage next and asked the crowd to close their eyes and think of everyday opportunities they might have to spread kindness, and make life richer.

“Thank you so much of reminding us of kindness,” he said to the girls.

And with that, honorees gathered onstage, ready to lead a walk to the Napa Valley Museum, where desserts, music and art awaited them. But before marchers could take to the sidewalks, Ruby addressed the crowd.

“As we’re walking and showing off our signs to the visitors and residents of Yountville, let’s remember the number one rule,” she said. “What is it?”

The crowd shouted back: “Be kind!”

Hundreds of supporters walked through the streets of Yountville on Saturday morning to spread a simple message: be kind.