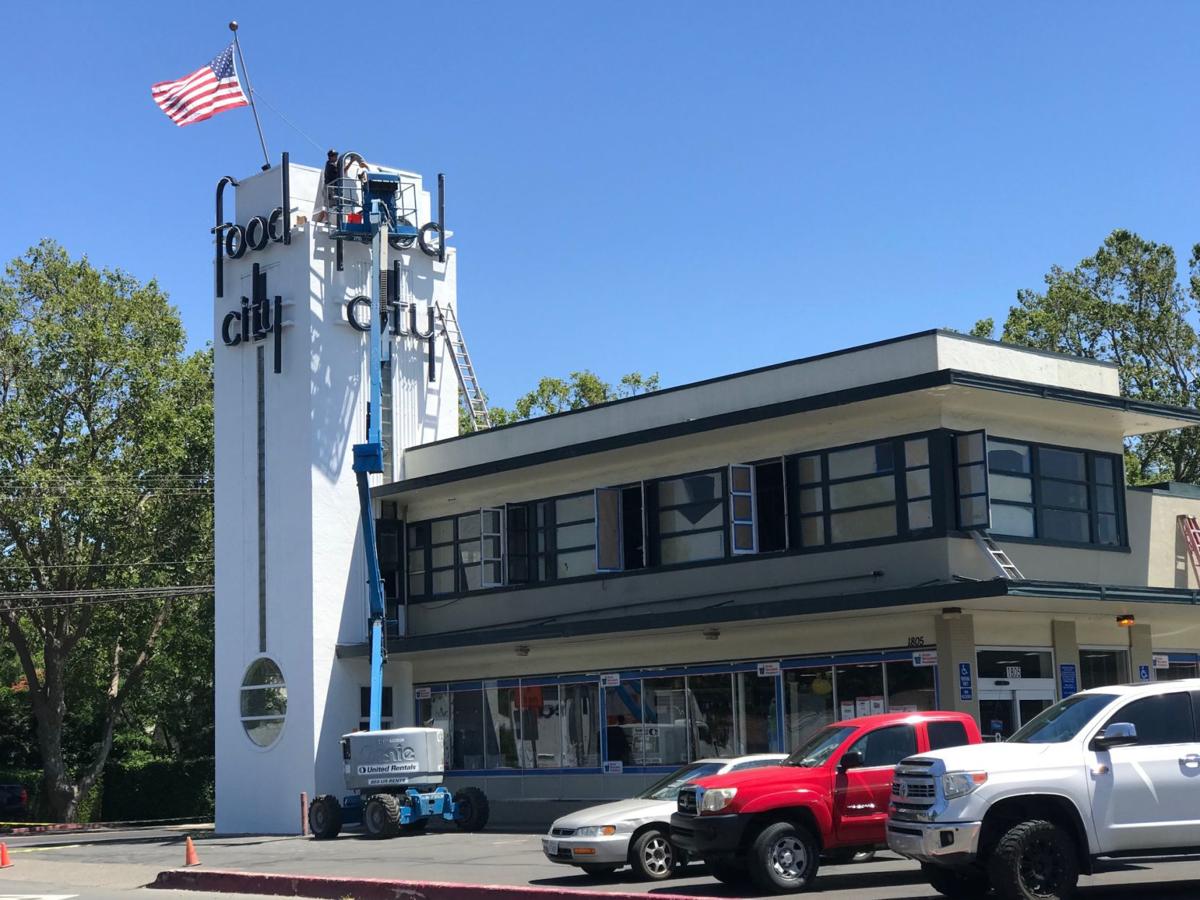 Workers recently finished installing vintage Food City letters at the south Napa center. A makeover of the center is planned with new tenants. 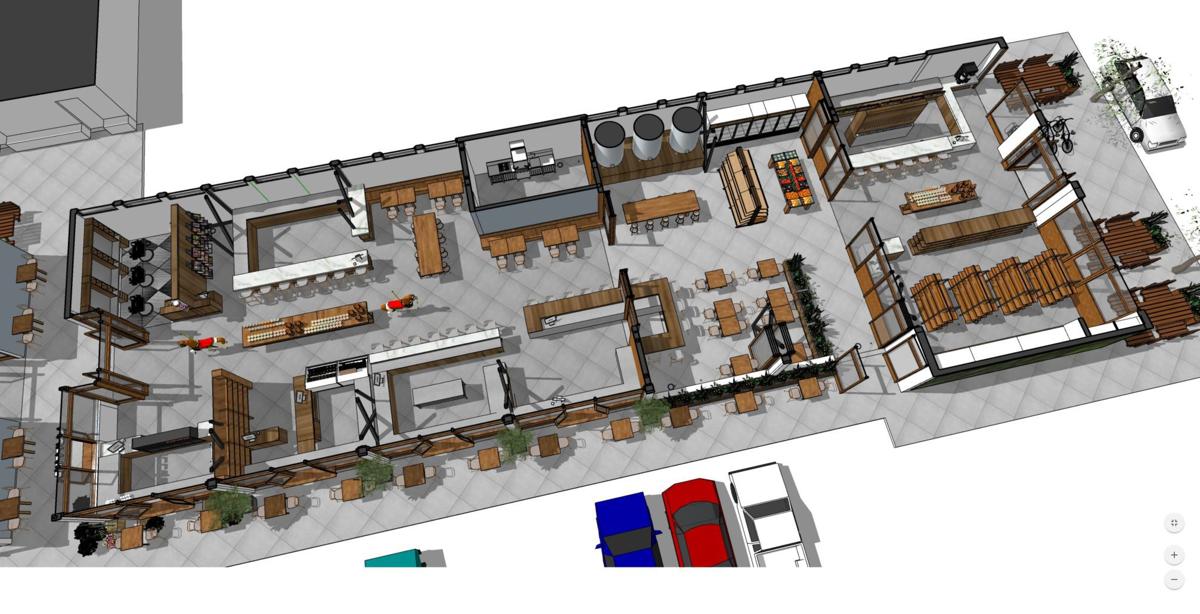 An image of what the new Food City complex may look like after the interior is remodeled for businesses of many types. 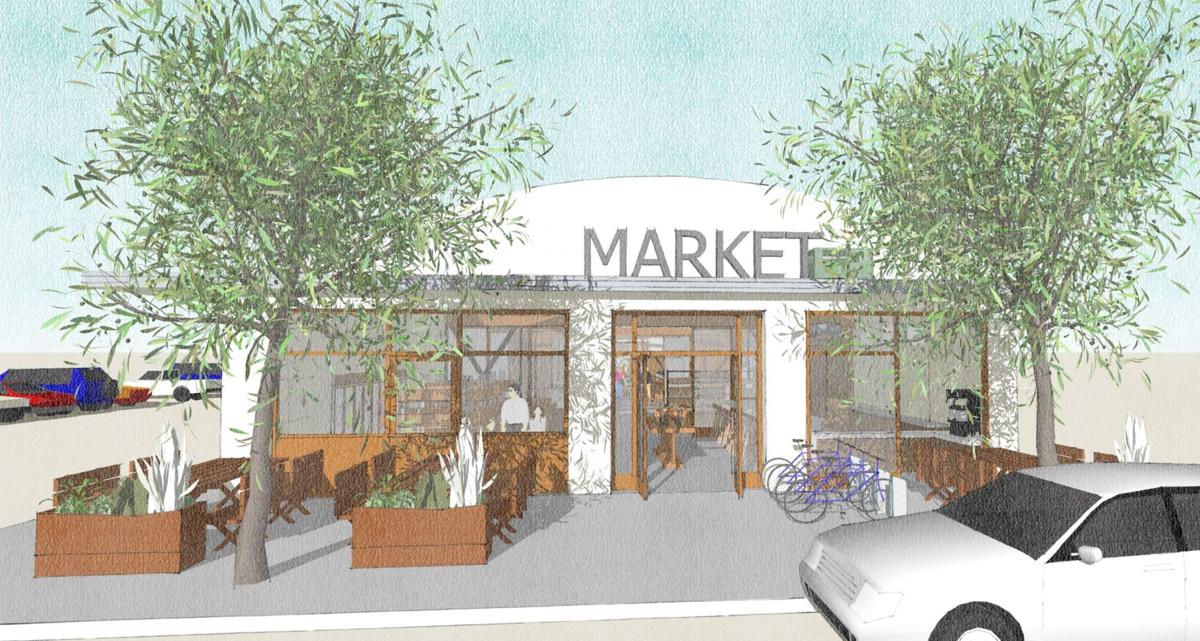 An image of what the new Food City complex would look like from Hartson Street looking east.

An image of what the new Food City complex would look like from Hartson Street looking east towards Jefferson Street.

One by one, the Art Deco metal alphabet letters were hoisted more than 40 feet into the air over the intersection of Old Sonoma Road and Jefferson Street, spelling:

Workers spent Tuesday and Wednesday re-installing two sets of the two words onto the outside of the tower of the longtime Napa shopping center. When they were done, the tower was restored to its appearance of decades ago.

In May 2018, Brooks Street and partner Michael C. Holcomb bought the south Napa center for $6.8 million from OSR Inc. The group announced plans to retenant, rebrand and remodel the corner parcel into a new destination for both locals and visitors.

The new Food City “won’t be anything like it is now,” said Scott Goldie, partner at Brooks Street.

“We want to bring it back” and create “an authentic gathering place for locals to connect over great food and drink, while supporting the Valley’s best farm-to-fork purveyors,” said the center’s website.

The west section of the property will be separated from the Family Drug building, creating a breezeway passage, Goldie explained. The interior will then be opened up and converted into a market hall-style structure with an open walkway between tenants.

The new development may include cafes, restaurants, a produce market, wine shop, a speakeasy, a barbershop, small bookstore, a cut flower/plant shop, a pharmacy, and ‘1942,’ a boutique private membership club to occupy the main building’s second story.

Today, the remodel of the western half of the property, located on the 1800 block of Old Sonoma Road, is underway and tenants identified.

“We believe we’ve got it 100 percent leased already,” Goldie said. “I can’t disclose their names but they are all local and people everyone will know.”

Goldie said he’s approached the existing tenants such as a nail salon, Mexican restaurant and liquor store about how they might fit in with the new project.

“We have been talking to them for a number of months and it’s still in flux,” he said. “Nothing’s been determined.” However, “This concept would be different from what they are doing right now,” he acknowledged, and some may not remain tenants.

Goldie said they are also talking with the largest tenant, Family Drug. That business occupies some 9,000 square feet. A tenant of that size would be “hard to work in our open market hall concept,” he acknowledged.

Joe Gracia, CFO of Family Drug, said he’s in conversation with Goldie’s team about reducing the store’s retail footprint at the center while adding an old-style soda fountain.

Gracia said Family Drug remains committed to offering pharmacy and related services but he thinks adding a soda fountain to the business “would fit real well” with the new Food City concept. “It would be fun to do.”

As many as 12 to 25 different merchants could occupy market hall spaces from 200 square feet on up, said Goldie. Rents would fall in the $3 “plus” per square foot range. Current lease rates range around $1.50 per square foot, he said.

The market hall concept could also act as an incubator, said Goldie. In this first phase of leasing, “We’ll probably have two to three local businesses that have never had a retail presence. Ideally if they are successful they could grow into a larger space in our center.”

In addition to the building changes, the partners will also landscape the parking lot and add sidewalks.

Goldie said the group plans to submit its planning application, featuring designs from Napa firm Kelly + Morgan Architects, to the city in the coming days.

Neither Holcomb or Brooks Street are new to Napa.

The Holcomb family has developed or owned a number of projects in Napa, including redeveloping a section of Second Street, the Borrero building on Soscol Avenue and various properties on Main Street.

The Food City complex first opened in the 1940s. It is said to have been one of Napa’s first “drive-up” shopping centers.

On Tuesday, during the letter installation, project superintendents Rick Perkins and Mike Hassett said they hope to have the neon on the Food City letters connected and lit shortly.

When the letters came off the tower years ago, they were considered lost. They were recovered when satellite aerial images of the property showed the letters lying flat on top of the tower roof, where they’d rested for many years.

Ranging from 3 to 9 feet tall, the letters are made of sheet metal and weigh about 20 pounds, Perkins and Hassett said.

This may be old news, but I just can't shake it out of my head. The Register ran a couple of articles on renewing the Family Drug into a kind …

A part of Family Drug lives on. Joe and Neanna Gracia, formerly of Napa's Family Drug, have opened a new business: Family Medical.

All in the ‘Family’: Gracia starts new Napa business with old roots

As one door closes another opens — or so the saying goes.

The revamped Food City could have a food hall with has many as eight vendors.

Workers recently finished installing vintage Food City letters at the south Napa center. A makeover of the center is planned with new tenants.

An image of what the new Food City complex may look like after the interior is remodeled for businesses of many types.

An image of what the new Food City complex would look like from Hartson Street looking east.

An image of what the new Food City complex would look like from Hartson Street looking east towards Jefferson Street.