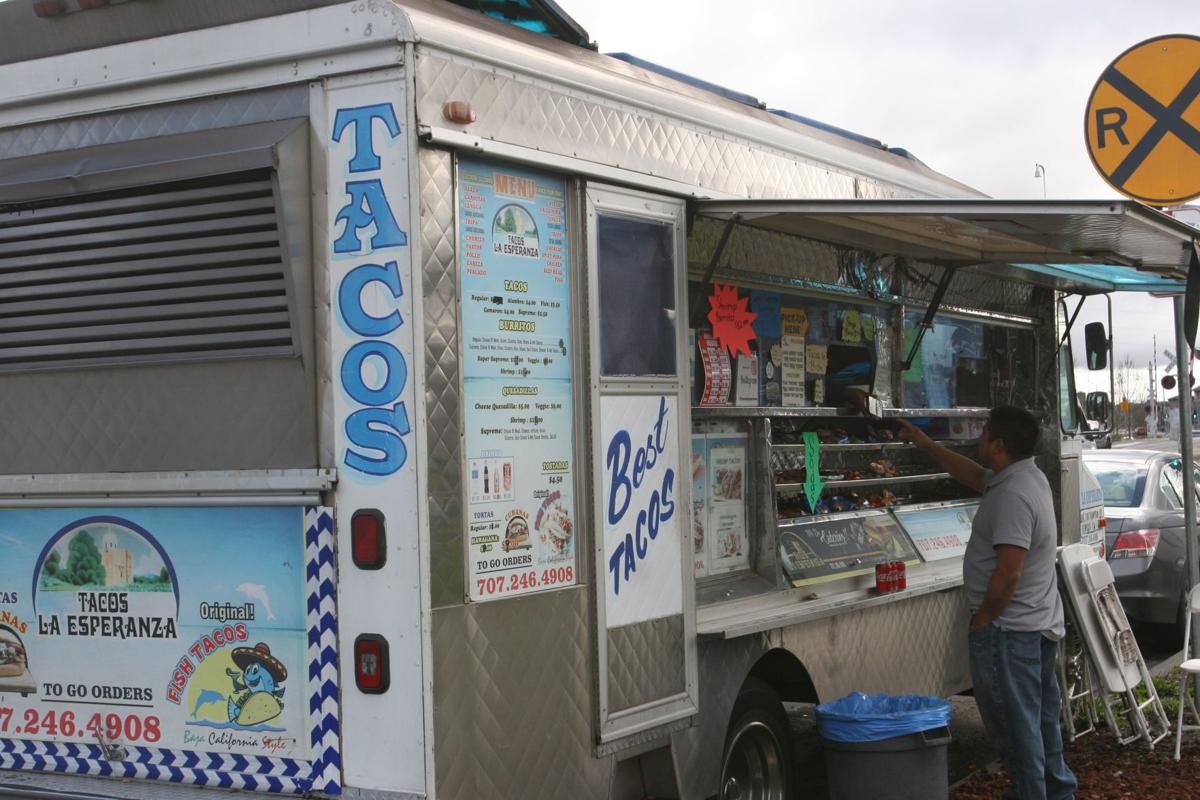 A customer waits for his order at Tacos La Esperanza, which began parking on Soscol Avenue in 2007. Owner Rene Gonzalez says the truck has been a way for him to share his food with the city of Napa. 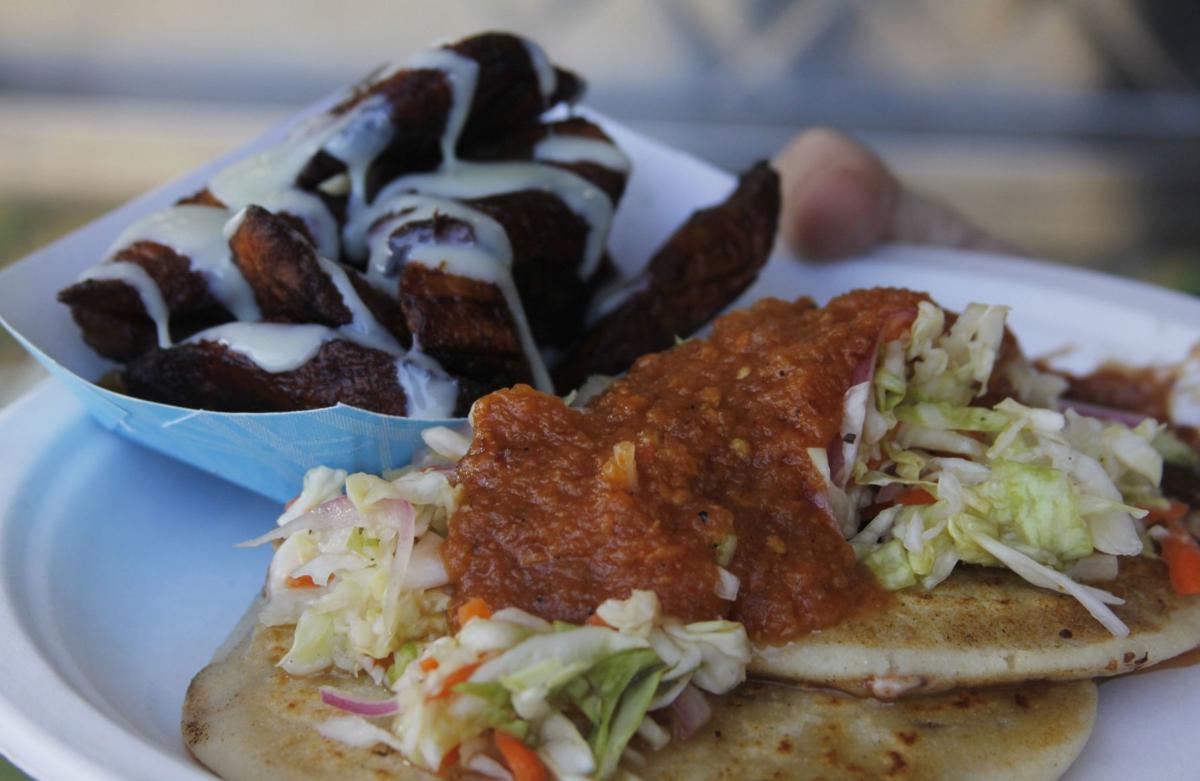 Fried plantains and tacos from Plantanito Latin Cuisine, one of the food trucks parked along Soscol Avenue. 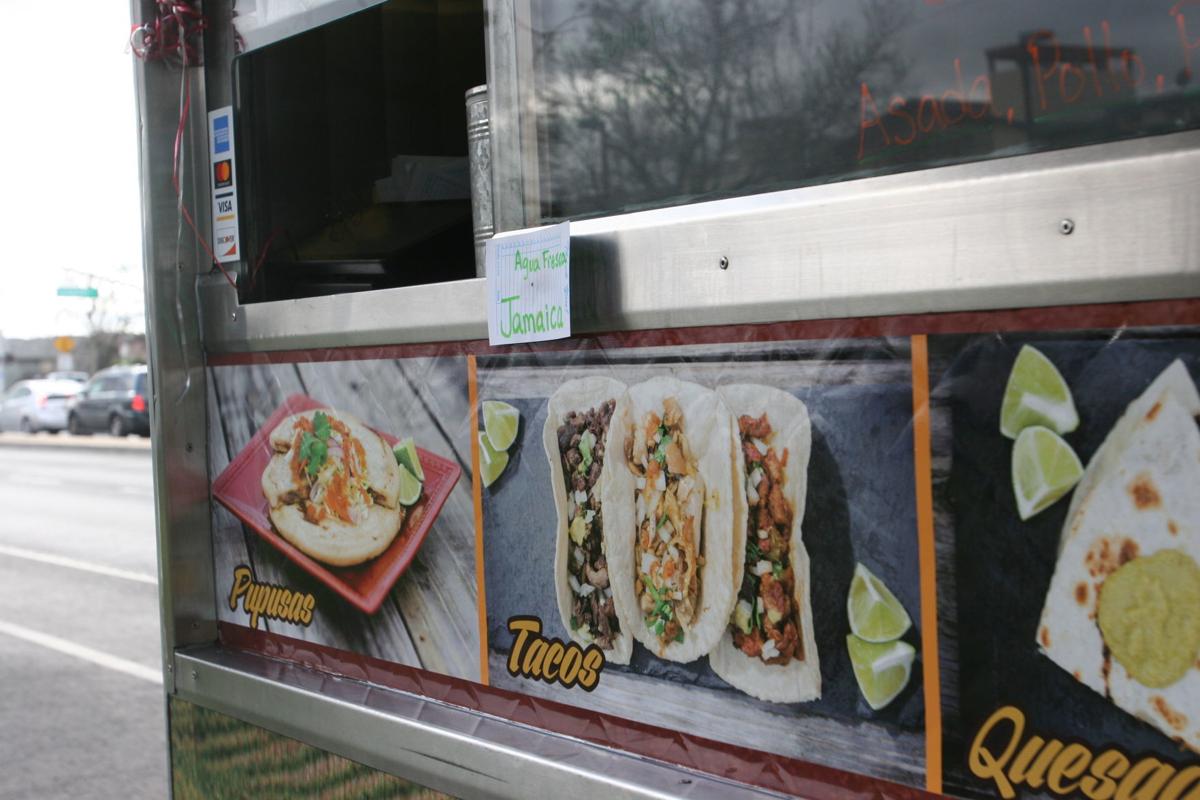 Colorful menu options from Plantanito Latin Cuisine, which parks across the street from Tacos La Esperanza on Soscol Avenue in Napa. The truck specializes in pupusas. 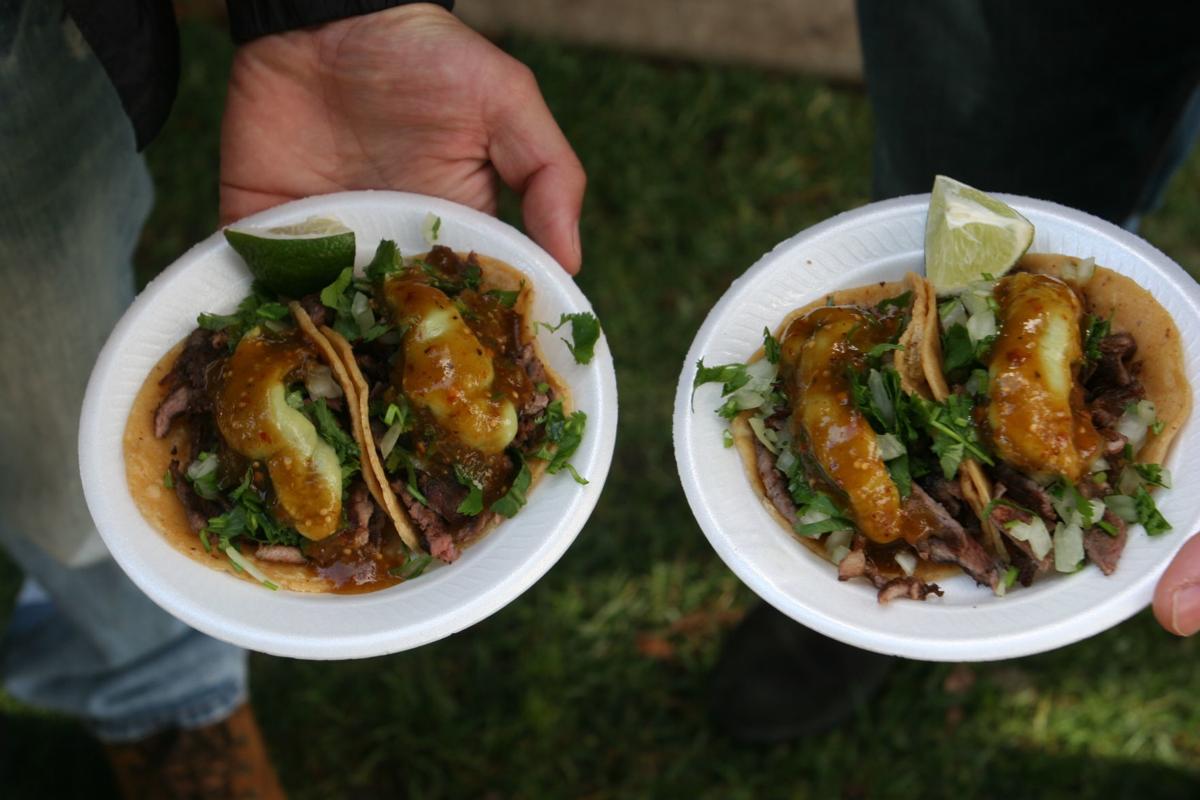 Customers hold tacos al pastor from Tacos Don Carlos, one of a handful of food trucks parking along Soscol Avenue in Napa. 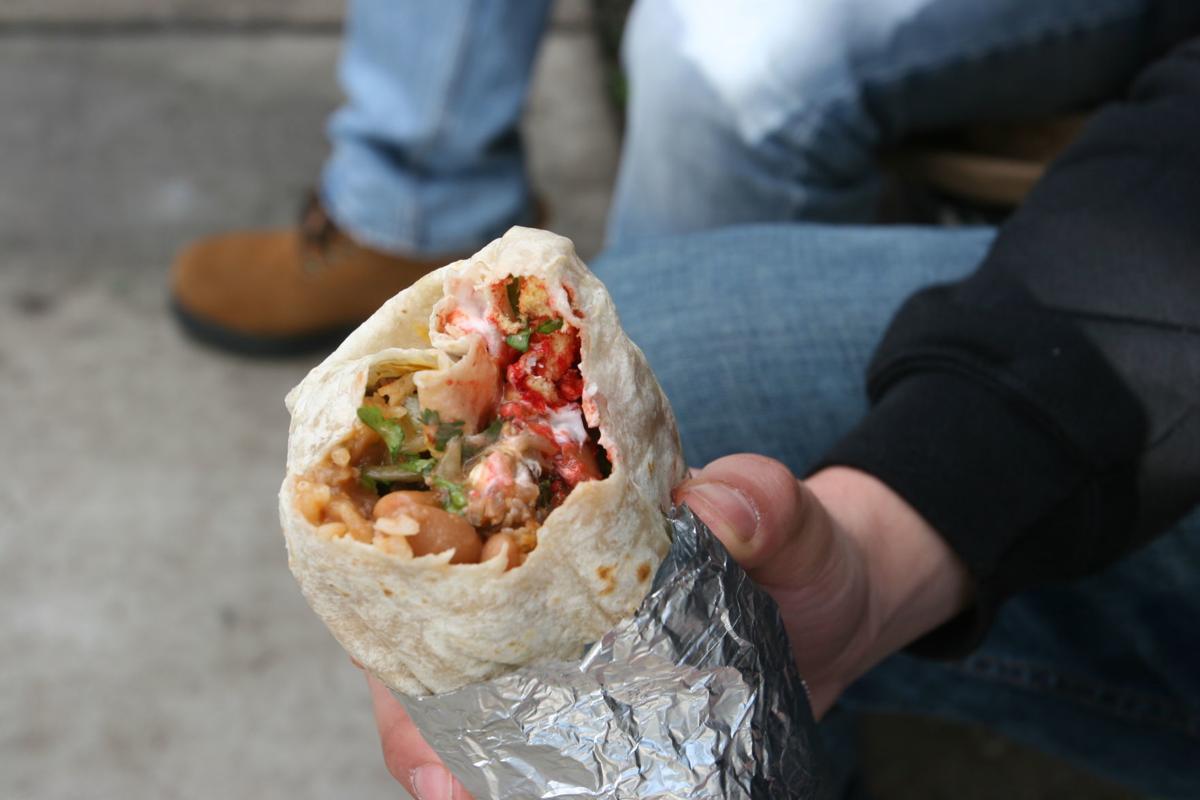 A bite into a Flaming Hot Cheetos Burrito, one of Tacos Don Carlos' specialties. The burrito is wrapped to include meat, cheese, beans, cilantro, sour cream and the bright red hot Cheetos. 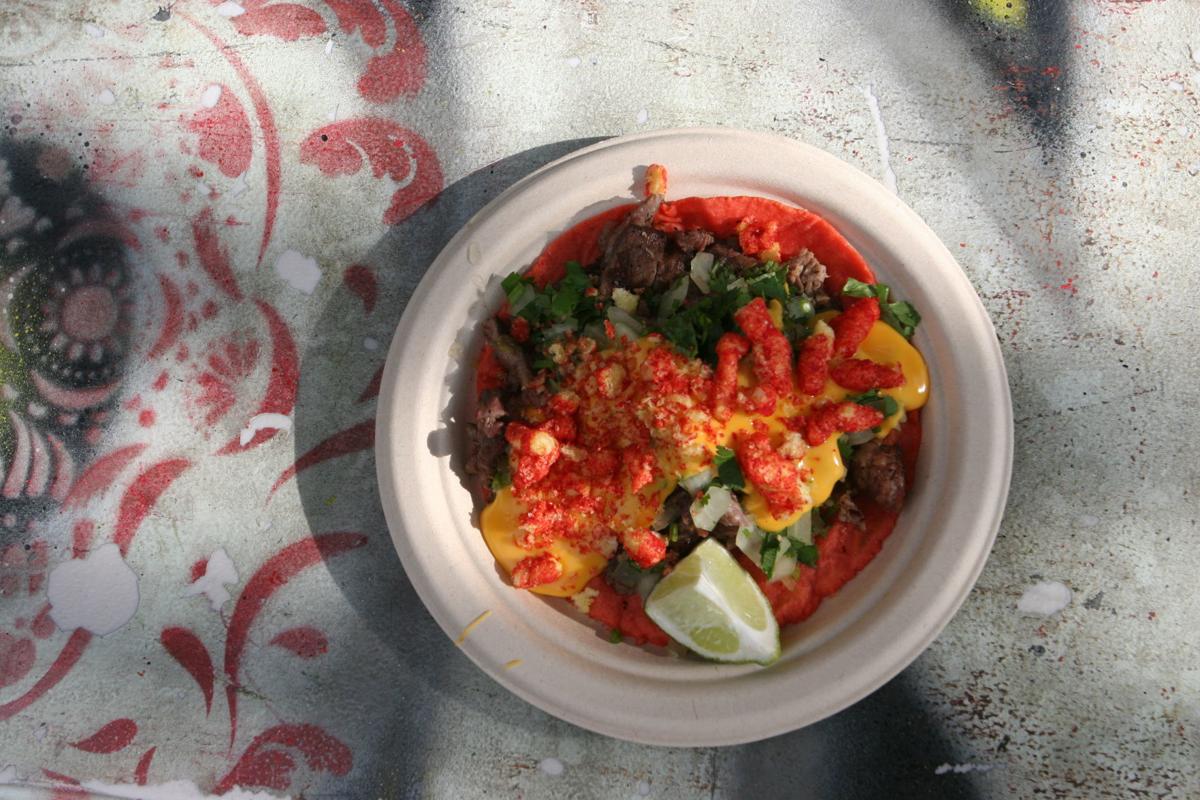 A flaming hot cheeto taco from Tacos Don Carlos in Napa. The truck's chef hand makes the bright red tortillas from the cheetos. 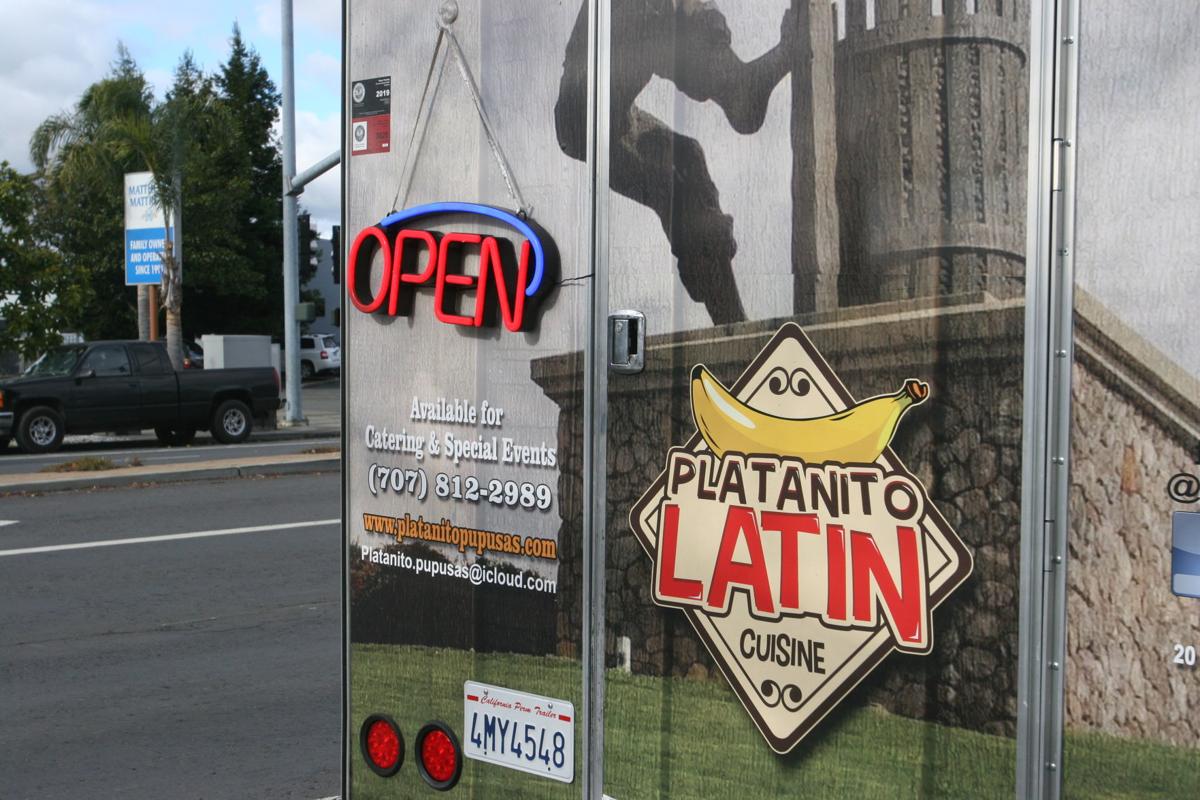 A customer waits for his order at Tacos La Esperanza, which began parking on Soscol Avenue in 2007. Owner Rene Gonzalez says the truck has been a way for him to share his food with the city of Napa.

Fried plantains and tacos from Plantanito Latin Cuisine, one of the food trucks parked along Soscol Avenue.

Colorful menu options from Plantanito Latin Cuisine, which parks across the street from Tacos La Esperanza on Soscol Avenue in Napa. The truck specializes in pupusas.

Customers hold tacos al pastor from Tacos Don Carlos, one of a handful of food trucks parking along Soscol Avenue in Napa.

A bite into a Flaming Hot Cheetos Burrito, one of Tacos Don Carlos' specialties. The burrito is wrapped to include meat, cheese, beans, cilantro, sour cream and the bright red hot Cheetos.

A flaming hot cheeto taco from Tacos Don Carlos in Napa. The truck's chef hand makes the bright red tortillas from the cheetos.

There are a number of obstacles facing restaurants in a town like Napa: high rents, high employee turnover, and a seasonal downturn in sit-down customers. Not so, though, for the city’s food trucks.

Running a food truck has been a way to remain viable for Rene Gonzalez, who has operated Tacos La Esperanza on the 1500 block of Soscol Avenue for more than a dozen years.

The food business is in his blood. It began with Gonzalez’s great-grandmother’s restaurant in the Mexican state of Ensenada – the birthplace of the recipe for the Baja-style fish tacos that his truck serves today. His father and his uncles have run food trucks all over the Bay Area since the 1970s, according to Gonzalez. Even his 75-year-old grandfather still slings tacos out of his truck in Oakland.

“It’s kind of difficult to open a restaurant, especially here,” Gonzalez said. “If you have a food truck, it’s an opportunity to express your culture, your food – to put it out there for the city of Napa.”

When it opened, Tacos La Esperanza was the only place serving fish tacos in Napa, he added.

Napa’s food truck population has grown visibly in recent years, but the mobile vendors have dotted Napa’s sidewalks since the early 1970s. Trucks like Taco Michoacán and Taco Chavez, which owners say was the first licensed food truck in Napa, have long been contributors to the city’s culinary diversity.

Taco Chavez has served tacos de cabeza (cabeza, which means ‘head’ in Spanish, refers to flavorful, roasted meat from the head of a cow) in the same location on Coombs Street since 1975, according to Gliselle Chavez-Seiffert, daughter of founder Pablo Chavez.

“In Michoacán, where he’s from, there’s lots of food vendors all the time; here, no one was selling anything,” Chavez-Seiffert said, of her father. Pablo, sensing an opportunity, began selling tacos from his pick-up truck following weekly Sunday soccer matches in St. Helena.

A close friend gave him the recipe for the cabeza; another, the recipe for her homemade salsa. When Pablo visited Mexico, he’d take extra care to observe the way vendors made their street tacos, Chavez said, hoping to learn something from them. (“He tells this story – at one point, one of them offered him a taco because he was staring so intently the vendor thought he was hungry,” Chavez-Seiffort said, laughing.)

Tacos Chavez grew slowly but surely, eventually becoming licensed by the city and expanding into a real food truck that Pablo outfitted with kitchen equipment himself. He worked full time while operating the truck, first for a waste disposal company and then in the vineyards during harvest. Chavez-Seiffert remembers doing homework in the front seat while her father ran the truck from 6 to 9:30 p.m. each night, the same hours Tacos Chavez keeps today.

“He’s been doing it so long that it’s a comfort, and his customers like that,” Chavez-Seiffert said. “Especially for someone (from Mexico) working here only seasonally who might not have much family nearby – it just brings that home to them.”

Today there are 62 food trucks licensed in Napa County, according to Delfin Dominguez, a county environmental health specialist. Though some don’t operate exclusively in Napa, Dominguez confirmed he’s seen steady growth in the city’s food truck population since beginning work for the county in 2008.

“Year by year, we’re adding a number of these. It’s not just been a mushroom cloud,” he said.

It shows. Today, the block of Soscol Avenue where Gonzalez parks is home to five other food trucks. Across the street from Tacos La Esperanza, Plantanito Latin Cuisine serves up handmade pupusas and other Salvadorian fare; maybe a hundred feet down the road, Tacos Don Carlos crafts SoCal style, Mexican-inspired fusion food, including the truck’s popular Flaming Hot Cheeto taco. Up the street is La Casa de Taco, which specializes in al pastor style tacos. La Condesa Taqueria, serving tortas and tacos, parks further down the street; then there’s Taco Addiction, known for its chalupas (crispy, fried hard shell tacos), and the Jalisco-inspired tacos at Tacos El Muchacho Alegre, both stationed a few minutes’ walk away on Lincoln Avenue and Jackson Street, respectively.

The concentration isn’t a coincidence, according to Tacos Don Carlos co-owner Carlos Mata, who has parked on Soscol since 2017. Regulations for food trucks make the area one of the only viable places for trucks to park, he said, adding that he doesn’t feel threatened by the presence of other trucks.

“I believe the sun comes out for everybody. We all have our own unique style of cooking,” Mata said, nodding to his peers.

Mata and his wife Maria, who own the truck together, don’t come from a food service background; before Tacos Don Carlos, Maria was a nanny and Mata worked in printing. But food has been an integral part of their lives, just as it is in Sinaloa, the Mexican state where Maria is from, and in Michoacán, Mata’s parents’ home state.

Tacos Don Carlos serves traditional Sinaloan plates with Michaocan salsas right alongside their Flaming Hot Cheeto tacos, which feature bright red tortillas (handmade using Flaming Hot Cheetos). For Mata, too, it’s something of a wine country embodiment of the street vendors in Mexico, who often cook their food outside over grills. In pursuit of that tradition, Mata has outfitted his own truck with a charcoal grill.

“It’s a fusion. You could say we have the best of both worlds,” Mata said. “We wanted to incorporate food that you don’t see here, in Northern California.”

For Maria Trujillo of Plantanito Latin Cuisine, the truck has been a way to share her love of cooking, according to her son Arturo Bibiano. The two began selling Trujillo’s food at a stall Saturday mornings at the Napa farmer’s market in 2015; the food truck gave the business a new platform, Bibiano said.

“We were finding there were no pupusas here in the valley,” Bibiano said, referring to fluffy flatbreads stuffed with meat, cheese or vegetables that are Plantanito’s specialty. The lone Salvadorian cuisine in the valley, Plantanito’s closest competitor is a half-hour south in Vallejo. “We kind of own that little niche – that’s why we got into the business.”

Though the truck was a significant investment – around $160,000 for the truck and the vehicle to haul it, according to Bibiano – the mother-son pair have paid it off in the last two years. The truck serves other fare, like tacos, burritos and fried plantains, though further menu expansion is challenged by space constraints. Opening a restaurant is something they’d like to consider down the road, Bibiano added.

“The overhead is definitely what gets you, having a brick and mortar location,” Bibiano said. For now, the truck allows the business to remain flexible.

Gonzalez, of Tacos La Esperanza, believes Napa is especially suited to food trucks: he regularly interacts with tourists from all over the world who order his food. Sometimes they haven’t tried Mexican food before coming to Tacos La Esperanza, which makes their patronage a special honor.

“I don’t think I’d be able to get that experience in another city,” he said.

Business is going well for Gonzalez; he recently opened up a second truck, which he’s parked on Solano Avenue. Twelve years on from starting his first truck, he runs Tacos La Esperanza with the help of his mother, brother and sister. It’s a way to share their family’s food and culture.

“I still call my grandma when I make the heavier stuff to make sure I’m right,” he said, referencing traditional foods. “There’s a lot of pride in it.”

Mexican Markets: Flavor, produce, and pride and lots and lots of avocados

There is a theme that rises to the top when you walk through the front door of Mexican markets scattered across Napa County. Everything, it seems, tastes better than big-box, corporate supermarkets. Especially the avocados.