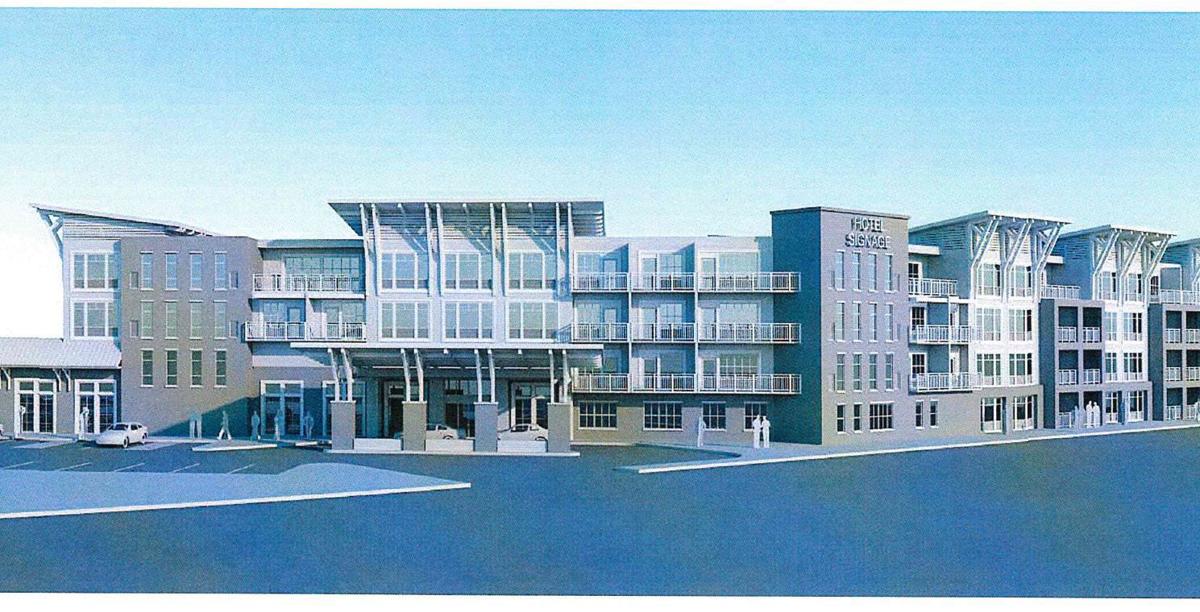 A preliminary artist image of a proposed hotel on Soscol Avenue. 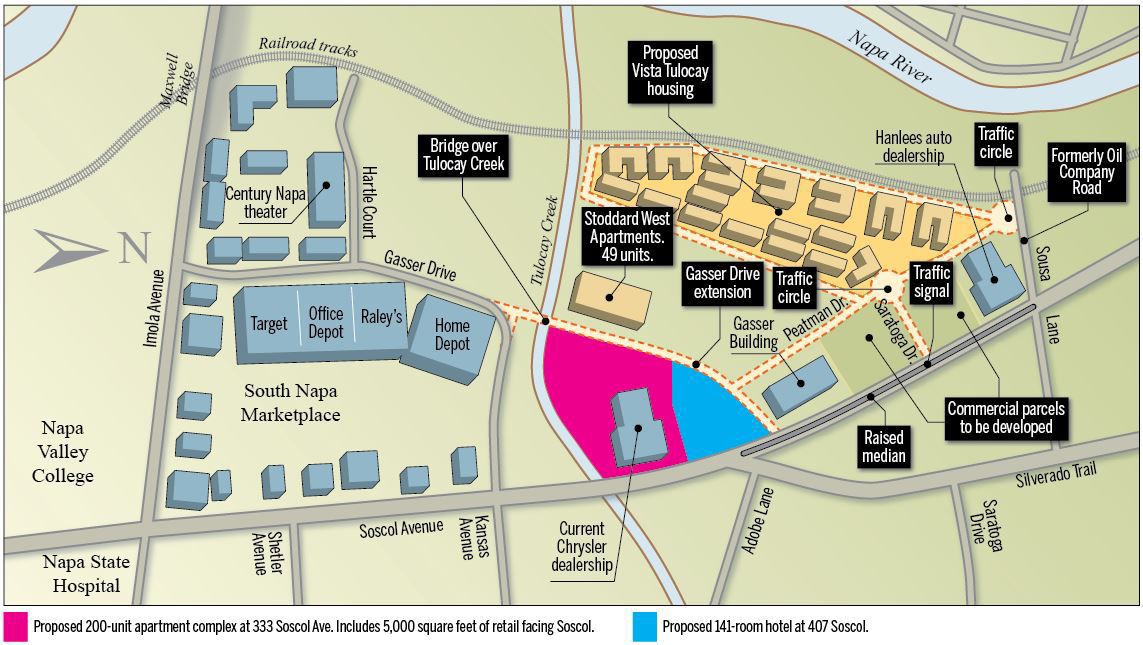 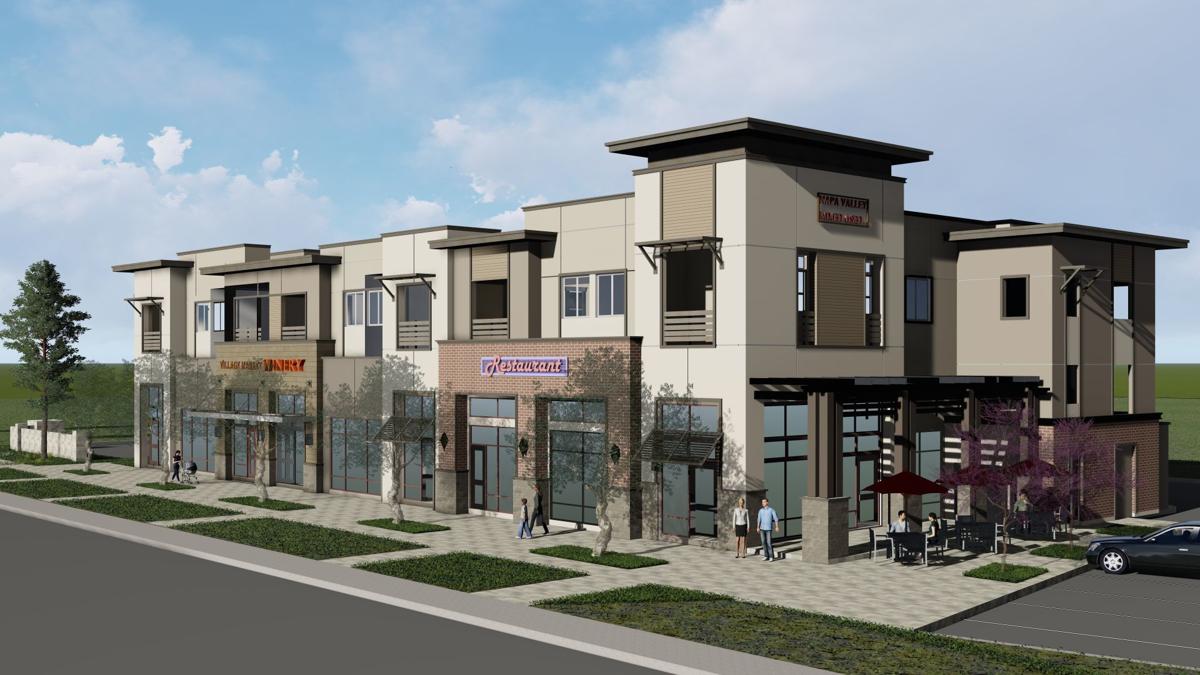 A preliminary artist image of a proposed commercial space on Soscol Avenue. It would be paired with a 200-unit apartment complex called Creekside East and a 141-room hotel.

Amidst an ongoing debate about the need for more housing versus the need for more hotel rooms in Napa, developers chosen by the Gasser Foundation have asked the city for permission to build another 200 apartment homes and a 141-room hotel on Soscol Avenue.

The project would be adjacent to a slew of other Gasser-initiated projects including 400 apartments at Vista Tulocay, new auto dealerships, more commercial space and the Stoddard West low income housing complex.

“We felt that building additional apartments on the site would be beneficial to the community.”

In addition to the housing, “The Foundation feels that hotels are an important part of our community economy,” said Fischer.

“They bring significant revenue to our city and county, helping to fund many of the capital projects that we all want — sidewalk and road improvements as well as funding to improve parks,” said Fischer.

The Gasser Foundation chose Fairfield Residential to develop the 7.37-acre housing site, called Creekside East at 333 Soscol Ave. It is located on the west side of Soscol, just north of Tulocay Creek. A Chrysler dealership currently occupies a portion of the site.

The Gasser Foundation still owns all 10 acres of the property. Fischer declined to speculate on the cost of the two developments.

The housing proposal includes building 200 mostly two-bedroom apartments with some one- and three-bedroom units. Home sizes will range from 791 to 1,348 square feet. Creekside East will also include approximately 6,000 square feet of retail facing Soscol Avenue.

The name Fairfield Residential may sound familiar. That’s because the San Diego-based company is the same developer of the adjacent Vista Tulocay apartment complex, the future home of some 400 apartments behind the Gasser Building, with views of the Napa River.

“We really like the Fairfield team and because of their Vista Tulocay project, we feel they understand Napa and the city processes,” said Fischer.

A total of 15 percent of the 200 apartments – 30 units – will be rent restricted low income housing.

“This plus the 170 market rate units will go a long way to meeting the housing needs of our workforce and younger people starting their first jobs here,” said Fischer.

Paul Kelley, city of Napa planning commissioner, had favorable comments about the proposals.

“I think it’s the best idea for a hotel-paired project that’s been presented to the city to date,” said Kelley during a phone interview last week.

“What’s exciting is that it’s the first time a developer has come in with a side-by-side proposal for housing and hotel project,” said Kelley.

From his preliminary meetings with the developers, Gasser seems to want to create a project that’s “a win-win for the community,” Kelley said.

“I really like the idea” of 200 housing units, said Kelley.

He hopes there will be a way to provide hotel employee housing next door to the hotel.

“I’m hoping that might set the bar or show the way” to future hotel developers, Kelley said, with providing housing for hotel employees becoming the new norm.

The Gasser Foundation “is very aware of the concerns over the tight supply of workforce and low income housing,” said Fischer.

“That was the reason behind the proposal for 170 ‘market’ and 30 ‘low income’ units on the site.”

“It is also the reason that Foundation worked so hard for the 50 units of Stoddard West low income housing now under construction and across from the proposed hotel.“

“The other really nice component is there is a retail building fronting Soscol,” Kelley noted.

“I hope it’s something that serves the locals at that location,” Kelley said. “The last thing we need there is a tasting room.”

Kelley was also keen to approve a project that is aesthetically pleasing.

Because the Soscol corridor is being improved and “beautified” into a gateway befitting Napa Valley, “each project needs that level of design scrutiny,” said Kelley.

But when one of the first renderings of the proposed housing featured Tuscan-style architecture, “We all kind of groaned,” Kelley said. “We’re trying to move more into a quasi-industrial articulated form that would fit the area but a whole bunch of Tuscan apartments just wasn’t going to make it.

“We’re trying to elevate the architecture …. to get the best possible design” out of the housing, he said.

Kelley said he hadn’t seen the proposed hotel architecture yet.

City of Napa planning department manager Erin Morris said she was still evaluating both parts of the project, but so far “the housing looks pretty straightforward,” and such a use is permitted at that location.

The hotel use would require a general plan amendment and rezoning from community commercial and mixed use to tourist commercial.

As for the hotel proposal, “We don’t have a position until we get through our initial 30-day review and analysis,” she said.

The proposed, four-story, 141-room hotel will be built and operated by the Widewaters Hotel Development, based out of New York.

“Hotels house the guests that want to experience our rejuvenated downtown,” Fischer said.

“The restaurants and retailers in our downtown rely on both the business from us that live here and visitors to be sustainable and support the many locals that these businesses employ,” he said. “We feel our proximity to downtown will help drive that business and support our downtown entrepreneurs and workers.”

Fischer said the group chose the Widewaters Hotel Development because they are a developer and operator and already have their “core build” capital in place.

“They are sensitive to the kind of hotel positioning that we feel is a fit,” said Fischer.

Widewaters Hotel Development plan to operate the hotel as an independent or “soft” brand. Examples of soft brands include Marriott’s Autograph Collection or Hilton’s Curio. Such hotels are independently run, but under the umbrella of a huge worldwide brand.

“The idea is to create a guest experience that is positioned between the Hampton Inn at Century Center and the higher end ‘boutique’ branding of the Andaz, Archer and Westin Verasa properties,” said the application. The property would also include a pool, meeting space, dining and other customary amenities. A total of 142 parking spaces would be created.

While sounding optimistic about the plans, Fischer added a cautionary note.

“Getting hotels entitled is a relatively easy process,” said Fischer.

“Getting them financed, built, and open, giving our community and the benefits we want, is a different game. In other words, a hotel entitled is NOT a hotel built,” said Fischer.

“There are many hotel entitlements approved or in the process in our city. Many of these will not be built or they will convert to other uses, such as downtown housing.”

While a number of new hotels have been proposed for the city in recent years, according to Fischer, the only hotels that have opened near the Napa downtown core are the Archer, the Andaz, the Hampton Inn and a small number of bed and breakfast rooms. The only new hotel currently in construction near downtown is the 90-room Cambria hotel at 320 Soscol Ave.

If the plan is approved, allowing for permitting and construction, the hotel should be open spring of 2021, he estimated.

The 10-acre Gasser parcel on Soscol currently includes the Hanlees Chrysler building, the former Napa Valley Tours and Transportation site and approximately three acres behind it.

Hanlees is moving its Chrysler franchise to a new building on Soscol Avenue.

In 2017, developers floated an idea to create a city civic center at the parcel. Those plans did not progress. Instead, the city is pursuing plans to build a new city center in downtown Napa.

“This 10-acre site is the last major piece of Gasser legacy land that is undeveloped,” said Fischer in a 2017 interview.

If it seems like Soscol Avenue’s Auto Row looks different every time you drive on it, you’re not alone.