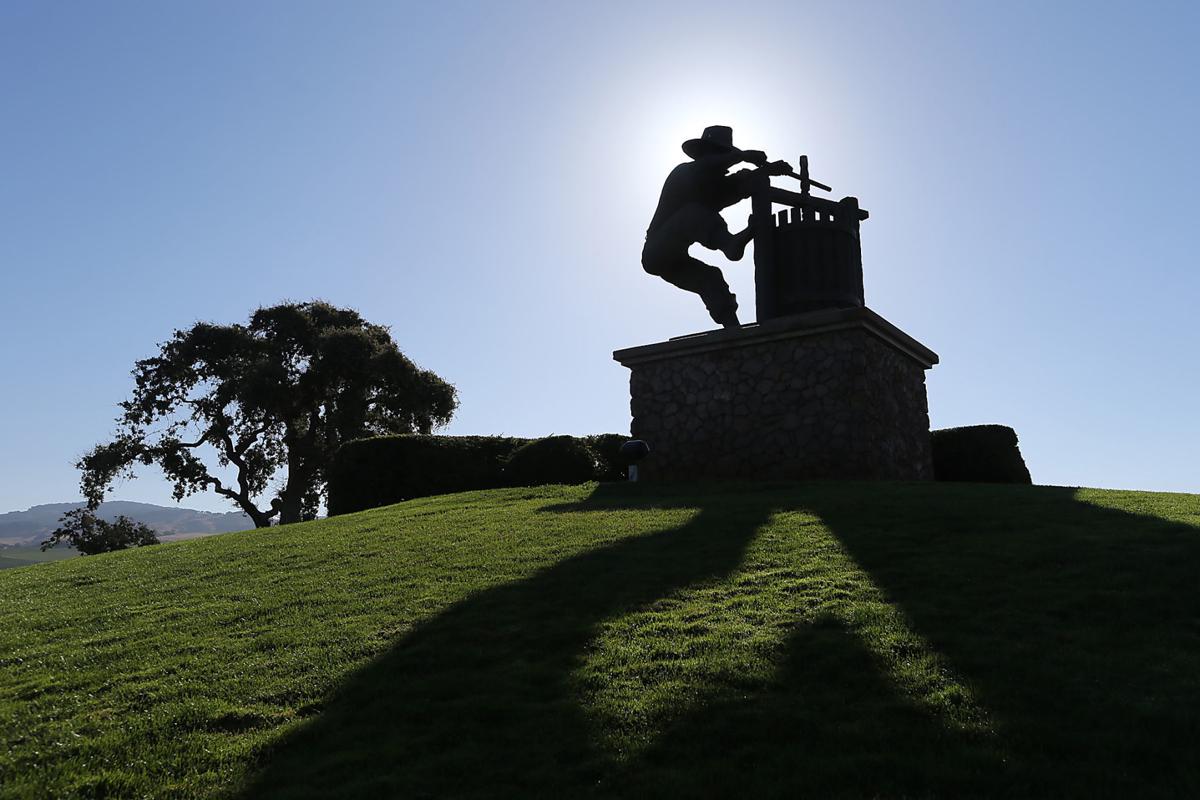 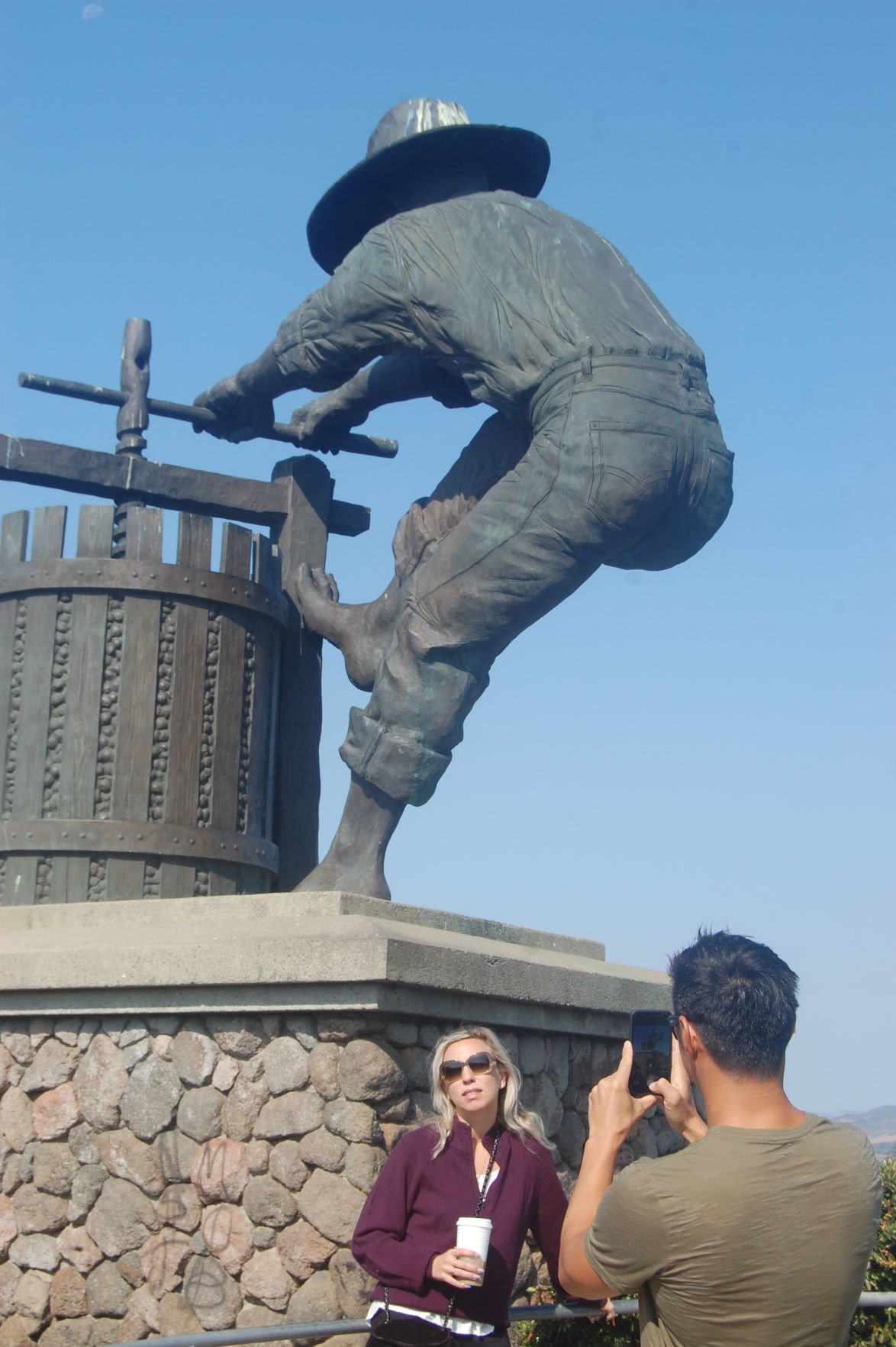 Wayne Hwang takes a photograph of Daria Tertova on Saturday at the Grape Crusher statue. They were visiting from Orange County. 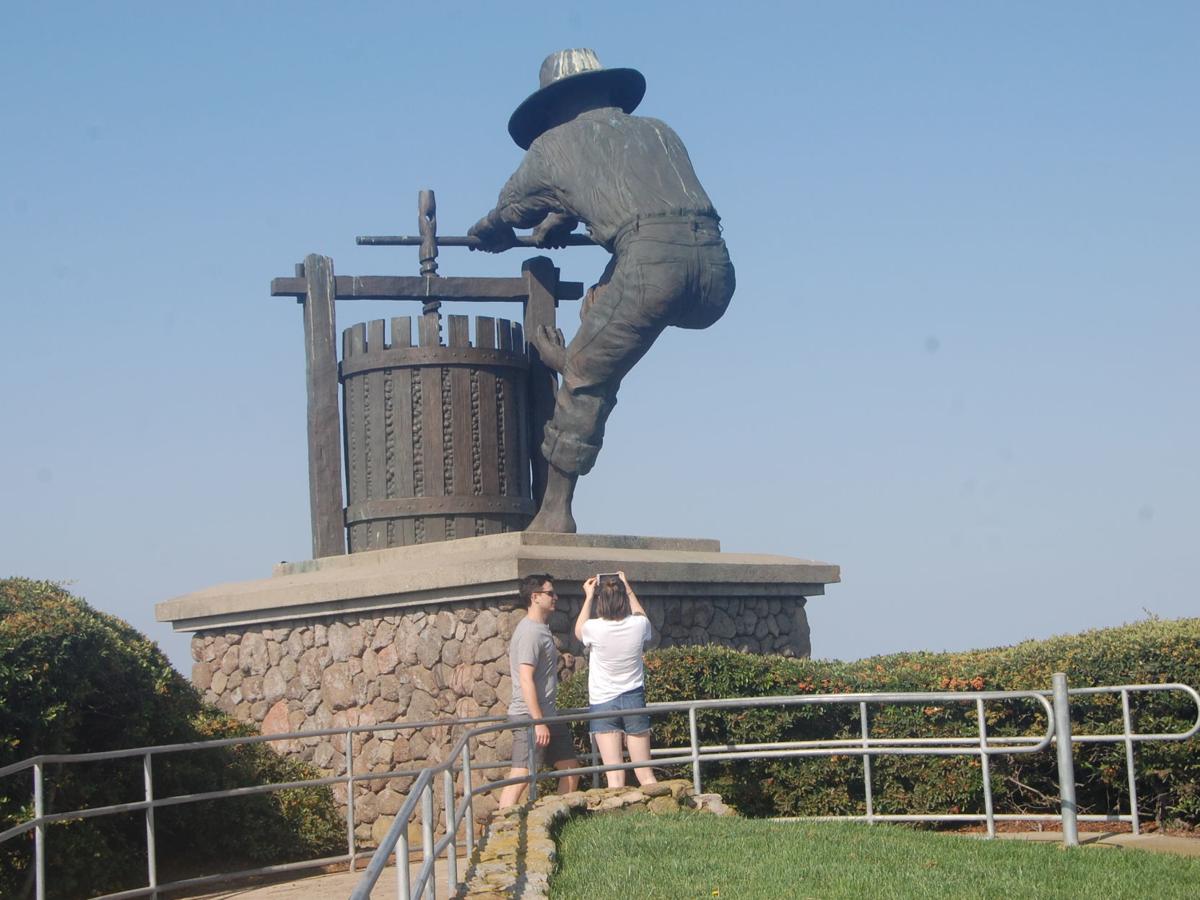 Michael Hewitt and Ciara Conlon-Hewitt admire the Grape Crusher statue on Saturday. The statue was erected at Vista Point 30 years ago.

Wayne Hwang takes a photograph of Daria Tertova on Saturday at the Grape Crusher statue. They were visiting from Orange County.

Michael Hewitt and Ciara Conlon-Hewitt admire the Grape Crusher statue on Saturday. The statue was erected at Vista Point 30 years ago.

Sculptor Gino Miles three decades ago thought his then-new Grape Crusher statue would become a landmark of sorts, if for no other reason than its size.

After all, the bronze statue is about 12 feet tall and sits on a hill overlooking world-famous Napa Valley. People passing by on Highway 29 can’t miss this giant depiction of a worker wearing a wide-brim hat straining to operate a grape crusher, beefy hands on the handle and one foot braced against the basket.

The Grape Crusher at age 30 is the attention-getter Miles foresaw and something more. Fans describe the statue as a Napa Valley entry feature conveying the hard work that helped create wine country glamour.

“I didn’t know it was going to become quite so popular,” said Miles, who ever since the 1980s has lived and created art in Santa Fe, New Mexico.

Joe and Kristine Truax visited Napa Valley from Rhode Island on Saturday and stopped by the Grape Crusher. Kristine Truax likes to take photos and learned about the statue after doing some online research.

Wayne Hwang and Daria Tertova of Orange County walked to the statue from the nearby Vino Bello Resort. Tertova praised the statue for having a sense of motion as opposed to depicting a static scene and said it speaks to her.

“It says so much about the hard labor it takes to make the wine,” Tertova said.

Michael Hewitt and Ciara Conlon-Hewitt visited from San Francisco and took photos at the statue. Conlon-Hewitt said that, in a high-tech world, the statue depicts something being done the old-fashioned way. She and some friends for fun once made wine using a hand-operated crusher.

“I imagine it’s a symbol for labor in the area,” Michael Hewitt added. “I think it’s really important to recognize.”

For those heading to Napa Valley wineries, the statue sets the tone for what’s to come.

“I think for visitors it shows kind of an iconic thing around wine making, that being the crushing of the grapes,” Visit Napa Valley CEO Clay Gregory said.

But in 1987, some people were skeptical about letting the then-proposed statue become a reality. The reason – they thought it might be an advertisement for the nearby Napa Valley Corporate Park, now called Napa Valley Commons.

The developers of the new business park, Peter Bedford and Bedford Properties, wanted to create the statue for $150,000 and place it on state property along the highway. The design resembled the business park logo.

“It’s too close to the corporate logo to accept as art in the general sense,” a county planning commissioner said at the time.

Caltrans disagreed. It accepted the statue as part of its Art in Public Places program.

In a Friday telephone interview, Miles said he made the model for the statue out of clay. A photograph from the era shows him doing just that, standing on a platform to reach the Grape Crusher’s hat. The statue was cast in a now-closed Santa Fe foundry and transported to Napa by semi-truck.

In May 1988, the statue was unveiled at its permanent home as part of Napa County’s sesquicentennial celebration. It was billed in a newspaper as being the largest bronze sculpture in the western United States.

Miles attended the ceremony. He told a reporter at the time that he had taught and studied art in Italy.

Despite its iconic status, tourists don’t flock to the Grape Crusher as much as they do to the “Welcome to Napa Valley” signs near Oakville and Calistoga. Spend a few hours at these sites and it’s obvious that the “Welcome” signs rule when it comes to spur-of-the-moment selfies.

The reason might be that people merely have to pull off the road to reach the “Welcome” signs. In contrast, they might see the Grape Crusher about 300 feet from Highway 29, but not know about the looping, half-mile route that leads to it.

But the Grape Crusher statue is a candidate for the most-seen piece of art in Napa County. Caltrans estimates more than 50,000 vehicles pass by daily. Depending on traffic conditions, some motorists view the Grape Crusher at speeds of 55 mph or greater.

And the Grape Crusher is no slouch in the photo department, as a look at the Internet shows. Visit Napa Valley included the statue in its “most photographed places in Napa Valley” feature.

“I think the Grape Crusher is fun for people to see and we sure had a great time taking pictures around it for our holiday card,” Gregory said.

Those who stop at Vista Point see more than the Grape Crusher up-close. The northern view looks up the Napa Valley past the city of Napa and Yountville to the mountains in the distance. The southern view looks toward American Canyon and the marshes and wetlands that peter out onto San Pablo Bay.

For those not in the know, the way to reach the Grape Crusher is to exit Highway 29 onto Soscol Ferry Road, remain on it as it curves beneath an elevated Highway 29 and turn right on Vista Point Drive.

Blue signs along both northbound and southbound Highway 29 inform drivers they can exit to reach Vista Point, but don’t mention the statue. Hwang recommended that Caltrans include a silhouette of the Grape Crusher on the signs.

Here’s some Grape Crusher trivia—the statue has writing on it that only the eagle-eyed can read. The writing is on the jeans patch near the waistline far above the viewer’s head. Some of the words are “Grapecrusher,” “Napa Valley” and “Made in the USA.”

Miles said he hasn’t seen the statue he created in a few years. When he does view it, different things come to his mind.

“Obviously, it’s been part of my life for 30 years,” he said. “I always realize I was very young when I made it. When I look back at it now, I think if I had more experience (then), I would have done a better job. I see things I would change now.”

He also sees the statue as being part of his family history. His parents saw him making it. His brothers helped him make it. His son was born during its creation and a few years ago was married at the statue.

Visitors to the city of Napa could soon be greeted by shiny new “welcome” signs meant to replace the aging billboards currently on display.