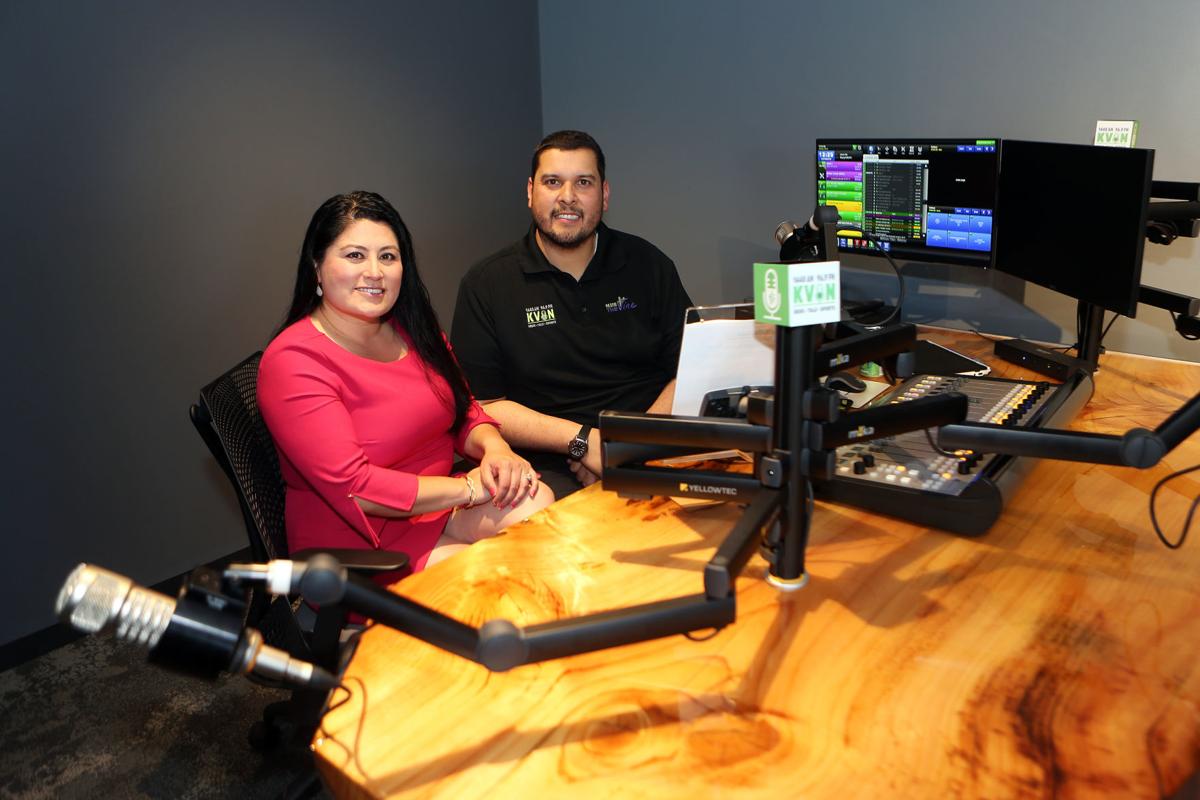 Julissa and Will Marcencia, owners of Wine Down Media, moved the company's Napa-based radio stations KVON-AM and KVYN-FM into new quarters at the South Napa Century Center on July 8. 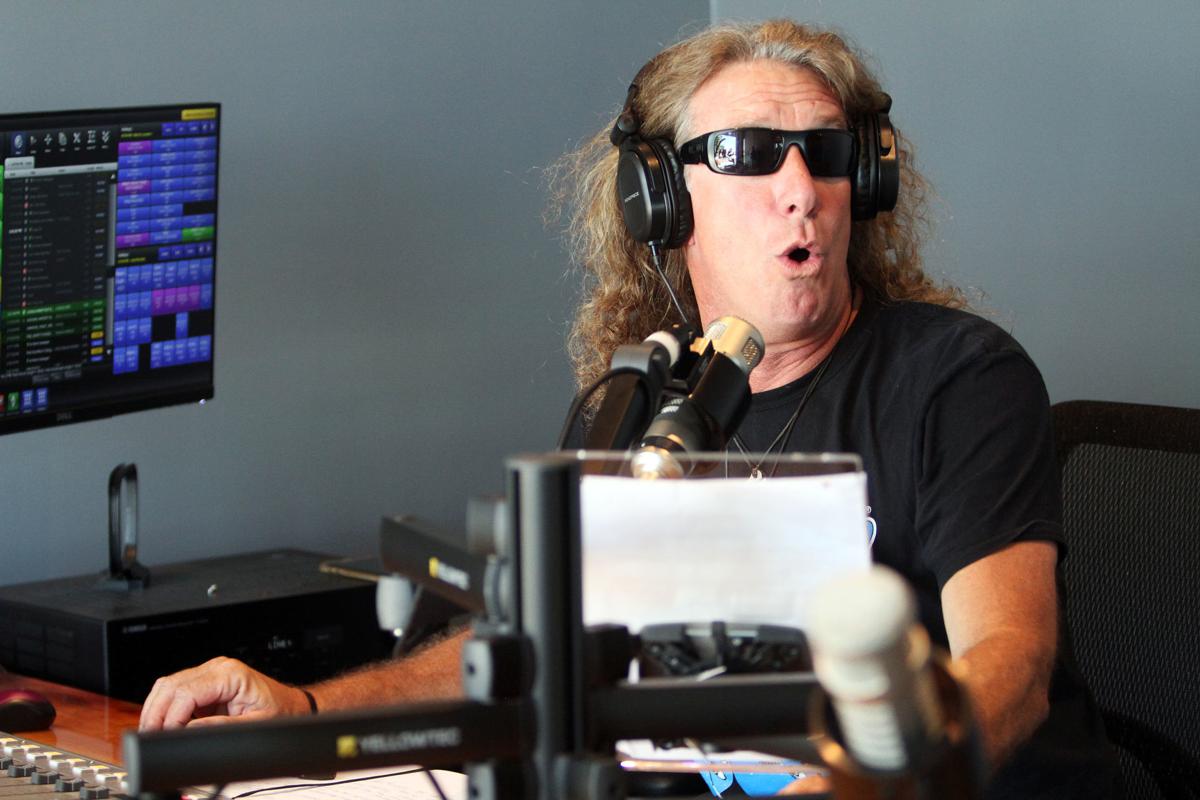 Bob St. Laurent is the afternoon host for KVYN-FM, one of two Napa radio stations owned by Wine Down Media. A new studio opened in early July to host KVYN and its peer KVON-AM, replacing the studio the stations had shared on Foster Road since the 1970s. 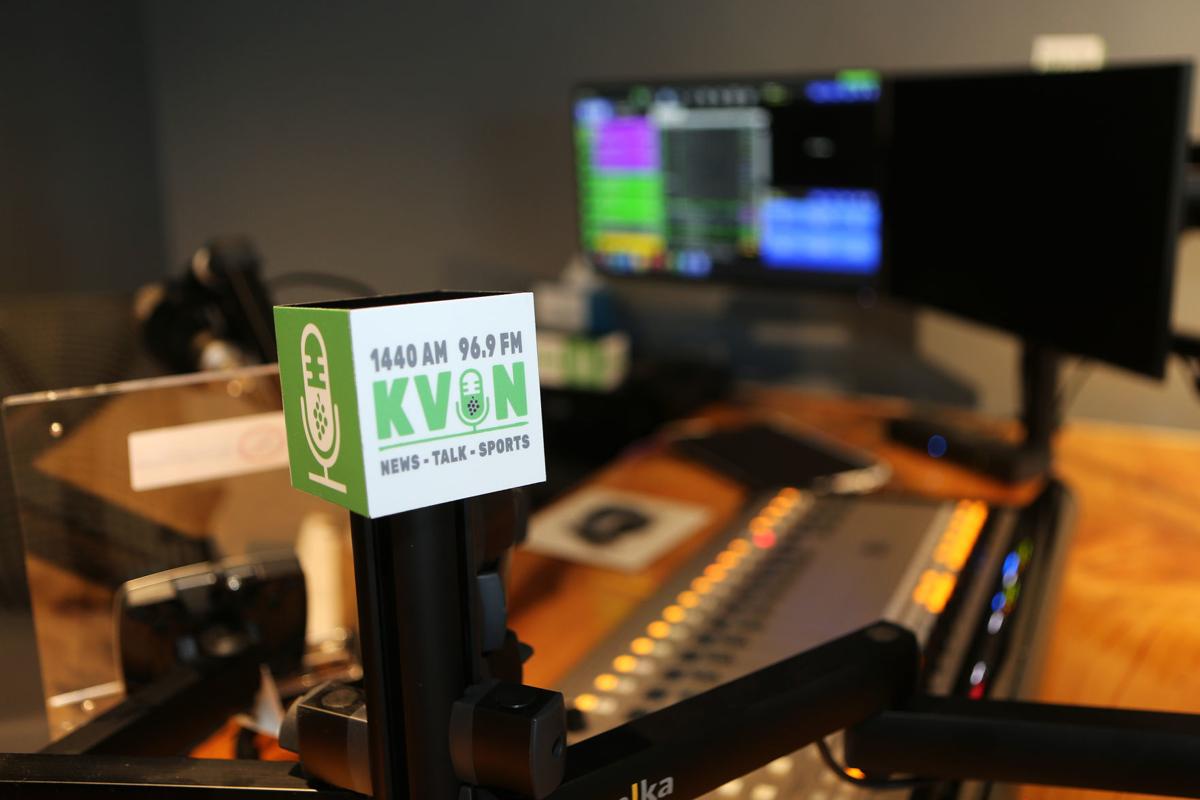 A newly opened ground-floor space at the South Napa Century Center off Gasser Drive hosts the new studios of radio stations KVON-AM and KVYN-FM, which have moved from their former home on Foster Road.

Inside the new headquarters of Napa’s twin radio stations, the surroundings suggest an up-and-coming Silicon Valley tech firm as much as morning drive-time chatter and Top 40 hit songs.

Exposed ventilation ducts line the ceiling above starkly dark-painted walls. Furnishings lean both eclectic and modern in the lobby, where curved designer chairs face an enormous slice of tree trunk polished into a coffee table. A wide glass-paned door rolls up garage-style to reveal a back room that can host podcasts, interviews and classes.

Such has been the backdrop for KVON-AM and KVYN-FM since July 8, when the stations moved into the South Napa Century Center on Gasser Drive. Along with new microphones, sound boards and computers, the studio has gained a new purpose, according to its owners – to rethink what it means to connect to its listeners.

The roll-up door is a symbol of that quest for fresh thinking, according to Will Marcencia, who with his wife Julissa formed Wine Down Media and purchased the two stations in July 2017.

“It’s there to give this the feel of a start-up,” he said Monday, on the two-week anniversary of the move-in. “We want to move into the podcasting space, move past terrestrial radio. It reminds us every time we walk in here that this is a start-up.”

Wine Down Media’s broadcasting center replaces the longtime home of KVON, a building on Foster Road dating back to the 1960s. The Marcencias announced the relocation of their studios in January, leaving the former headquarters open for a 14-unit townhouse project that Roger Walther, the stations’ previous owner, has applied to the city to build on the site.

Having taken over Napa’s share of the airwaves, the new owners soon envisioned a nerve center that would keep their stations in the public eye and more connected to their audience than was possible on the western edge of town.

Gasser Drive has become a bustling social hub since the 2012 opening of the Century Napa Valley movie theater, the first phase in a build-out of Gasser Foundation lands that has added an array of restaurants and shops and provided a new home for the Napa Farmers Market. Among the arrivals at the retail center was Naked Wines, whose headquarters included first-floor space the Marcencias found perfect to making the city’s radio stations more visible, more accessible than ever.

To capture Napans’ attention and make the stations stand out in a cacophony of online voices, “we had to be visible, and at Foster Road that wasn’t going to be possible,” said Julissa Marcencia, who added the couple looked at various downtown locations before turning their attention south.

“We saw the Gasser master plan for the new streets, the development, and that’s when we were like, ‘Oh yeah, this is going to be a great opportunity out there.’”

On Monday, the barrier between the relocated station and its city appeared as transparent as the lobby’s plate glass, through which a visitor could see the 12-screen cinema across the parking lot and the Maxwell bridge arching west over the river. The afternoon sun also spilled through more windows onto the KVYN broadcast room, where the early-afternoon host Bob St. Laurent amiably gabbed with the Marcencias during a commercial break.

Many of the upgrades at the Gasser Drive building are meant to help KVON and KVYN repackage its programs in ways unimagined in pre-internet times, when music and talk shows flowed only one way from tower to antenna. In particular, the studio includes equipment to automatically save and produce broadcast audio without a producer present, then upload it in podcast form for listeners to play on demand.

In addition, a “podcasting bay” at the studio will allow paying clients to produce their own programs, and KVON/KVYN also will offer to market the podcasts, according to Julissa Marcencia, who described interest in the subscription service from social-media influencers – often wine and food commentators – who currently work with producers in San Francisco. Later, Wine Down Media may expand into video production to serve clients looking for a professional-looking presence on YouTube and other platforms.

The experience of withstanding natural disasters like the 2017 wildfires – and the possibility of preemptive power cuts during fire-conducive conditions of high winds and hot weather – may have influenced other changes at the Gasser Drive studio. In particular, the building has been designed to remain operable in a blackout on a lower-powered natural gas generator instead of a more fuel-hungry diesel machine, and staff will run only what equipment is necessary to stay on air – such as the studio and machine rooms – while leaving nonessential spaces like break rooms dark, according to studio engineer Jonathan Obien.

In whatever form the radio stations reach their audiences, Julissa Marcencia hopes to strengthen their bond to Napa and its people.

“That’s the biggest thing that terrestrial radio has – being local, and being in the community,” she said.

A Napa radio studio’s sign-off this spring will segue into the arrival of construction equipment, after the city’s approval of 14 townhouses t…

Talk, music and sports will continue issuing forth from Napa’s twin radio stations – but, starting this spring, from a new hub.

The current location of Napa’s KVYN and KVON radio stations could be redeveloped into 14 townhomes, according to an application filed with the city.

Julissa and Will Marcencia, owners of Wine Down Media, moved the company's Napa-based radio stations KVON-AM and KVYN-FM into new quarters at the South Napa Century Center on July 8.

Bob St. Laurent is the afternoon host for KVYN-FM, one of two Napa radio stations owned by Wine Down Media. A new studio opened in early July to host KVYN and its peer KVON-AM, replacing the studio the stations had shared on Foster Road since the 1970s.

A newly opened ground-floor space at the South Napa Century Center off Gasser Drive hosts the new studios of radio stations KVON-AM and KVYN-FM, which have moved from their former home on Foster Road.