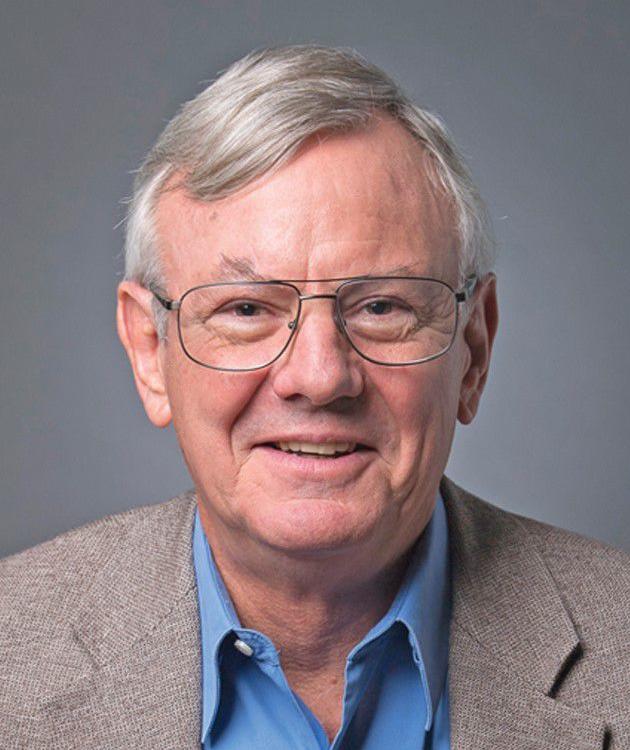 Paul Wagner, whose career in Napa's wine industry has spanned multiple decades and taken many forms. Wagner's two books are both the subject of international recognition from the Gourmand Awards - sometimes called the Oscars of the wine and food world.

Wine instructor Paul Wagner teaches Irish students about the Napa Valley in 2016 at the Napa Valley College teaching winery, part of the Viticulture and Winery Technology program. Wagner's books have recently been the subject of international acclaim.

If it has to do with wine marketing, Paul Wagner wrote the book on it.

Wagner’s tenure in the Napa Valley wine industry spans decades and many career paths; he’s taught a wine marketing class at Napa Valley College for the better part of the last three decades, and founded Balzac Communications, one of the valley’s premier beverage marketing firms, almost 30 years ago. He began at the ground level, working in sales positions in different wineries in the county.

Decades of expertise, experiential knowledge — and chance — spawned Wagner’s two books. Now both are on the receiving end of international recognition from Gourmand World Cookbook Awards, which considers global bodies of literature around food and wine.

He co-wrote his first, “Wine Sales and Marketing,” with Sonoma State University professors Liz Thach and Janeen Olsen. Thach, Olsen and Wagner found themselves together at a tasting event, and as all three taught college courses on Wine Marketing, they began talking shop.

“Liz and I got to talking, and she said, ‘You teach marketing at Napa Valley College — I teach at Sonoma State. What wine book do you use? What’s your textbook?” Wagner said. “I said, ‘There is no textbook.’”

That was in the mid-2000s, amidst a wave of burgeoning e-commerce trends and a rapidly changing sales and marketing landscape for the industry. Wagner had been using an outline he’d written himself to teach his class at Napa Valley College; it was a table of contents, essentially, for the course’s 17 lectures.

Olsen, overhearing the conversation, approached Wagner and Thach. She suggested the three write one together. Thach, who had just come off writing another book on the business of wine, was apprehensive: textbook writing had been an arduous, labor intensive process.

In response, Wagner led his colleagues to his car and opened up his trunk. He handed the two each a copy of his outline.

“I told them, ‘It’s all right here,’” Wagner said. Thach wrote a chapter or two and became the project’s editor; Olsen and Wagner penned the rest.

“Wine Sales and Marketing” won the Gourmand Cookbook Award for Best International Wine Book for Professionals — beating global competition from more than 200 countries — shortly after it was published in 2007. As the marketing landscape continued to change, the three released a second edition, and then a third. It’s that third edition that is up for an award of similar prestige, also from Gourmand, this year.

In the meantime, Wagner co-authored another book, “Wine Sales and Distribution,” with two professors of hospitality; one from Washington State University and the other from College of Charleston. And that book is now in the running for the Best International Wine Book for Professionals, the same as Wagner’s first book; it’s already won Best Book for the domestic category for the United States.

“It’s nice to be recognized, but in some ways, I don’t think the book is revolutionary,” Wagner said. “The book is common sense.” Wine is a notoriously slow-to-adapt industry when it comes to technology; Wagner jokes that his work with Balzac has remained relevant because of the industry’s slowness. Much of what he believes to be marketing best practices is as relevant now as it was 30 years ago; his advice just hasn’t been well-heeded.

At the forefront of the advice is a singular question: why?

“I have a mantra: please don’t tell me how your wine was made. Tell me why it was made,” Wagner said. Too many wineries focus on the details of the creation of their wine — the kinds of barrels it was aged in, what sort of microclimate produced the subtle terroir in this vintage or that. Consumers aren’t necessarily interested in that nuance, he said.

“When we listen to a new song from Lady Gaga, no one asks what kind of microphone they used to get the feedback in the vocals. They just love the music,” Wagner added. “When we talk about wine, and someone wants to know more, what they really care about is — who are you, and why did you make this wine in the first place?”

Twelve years on from the publishing of his first book, Wagner knows the marketing landscape for wine has continued to change. There’s been the advent of social media, which has allowed wineries to tell their stories directly to consumers; millennial employees are beginning to alter the way the industry thinks about making sales in the first place.

And while he said he thinks Napa’s industry leads the pack in terms of customer service, he said there are obvious spaces for improvement: finding niche markets (“I’m a big believer that each brand ought to have at least one little market that’s all theirs,” he said), working on reaching consumers directly both in person and online, and enhancing their tasting room experiences (“Do we hire people who are gifted in their presentation skills? Who have taken a class on public speaking, or theatre?” he asked).

The third edition of “Wine Sales and Marketing” discusses the future of the industry, but it includes a significant nod to the past: the foreword to the book is by Robert Mondavi, considered the father of Napa’s modern wine industry.

“The thing I always remember about Robert Mondavi is — his would be the one winery where there was a chance that the owner would be out front on Tuesday to shake your hand, saying, ‘Hi, I’m Bob Mondavi,” Wagner said. He laughed. “He got it better than anyone; he built his reputation by talking to people one on one. That is the messaging of all wine marketing: be like Bob.”

All that in mind, the three authors were cautious writing the third edition of “Wine Sales and Marketing,” Wagner said.

“We wanted to talk about electronic communication and how it’s transformed everything; at the same time we were extremely hesitant to say, for example, that Facebook would be the end all, be all of social media,” he said. Even since they published the book, he said he feels the social networking website has become less important.

“I was once asked to be a commencement speaker, and they asked me to tell the students about the software they’d need to know to be successful in the market five years from now,” Wagner said. “I told them — it hasn’t been written yet.”

Napa wineries are beginning to chat up customers online

A winery's website is an extension of its tasting room. Why not offer one-on-one customer service online, too?

Napa's wineries want you to visit: by car, by plane, or on Instagram

Napa wineries have turned to Instagram to sell themselves to a new demographic.

Pruning school, first of its kind for U.S., will come to Napa

Master pruner Marco Simonit says he can drastically extend the lifespan of vineyards.

Paul Wagner, whose career in Napa's wine industry has spanned multiple decades and taken many forms. Wagner's two books are both the subject of international recognition from the Gourmand Awards - sometimes called the Oscars of the wine and food world.

Wine instructor Paul Wagner teaches Irish students about the Napa Valley in 2016 at the Napa Valley College teaching winery, part of the Viticulture and Winery Technology program. Wagner's books have recently been the subject of international acclaim.