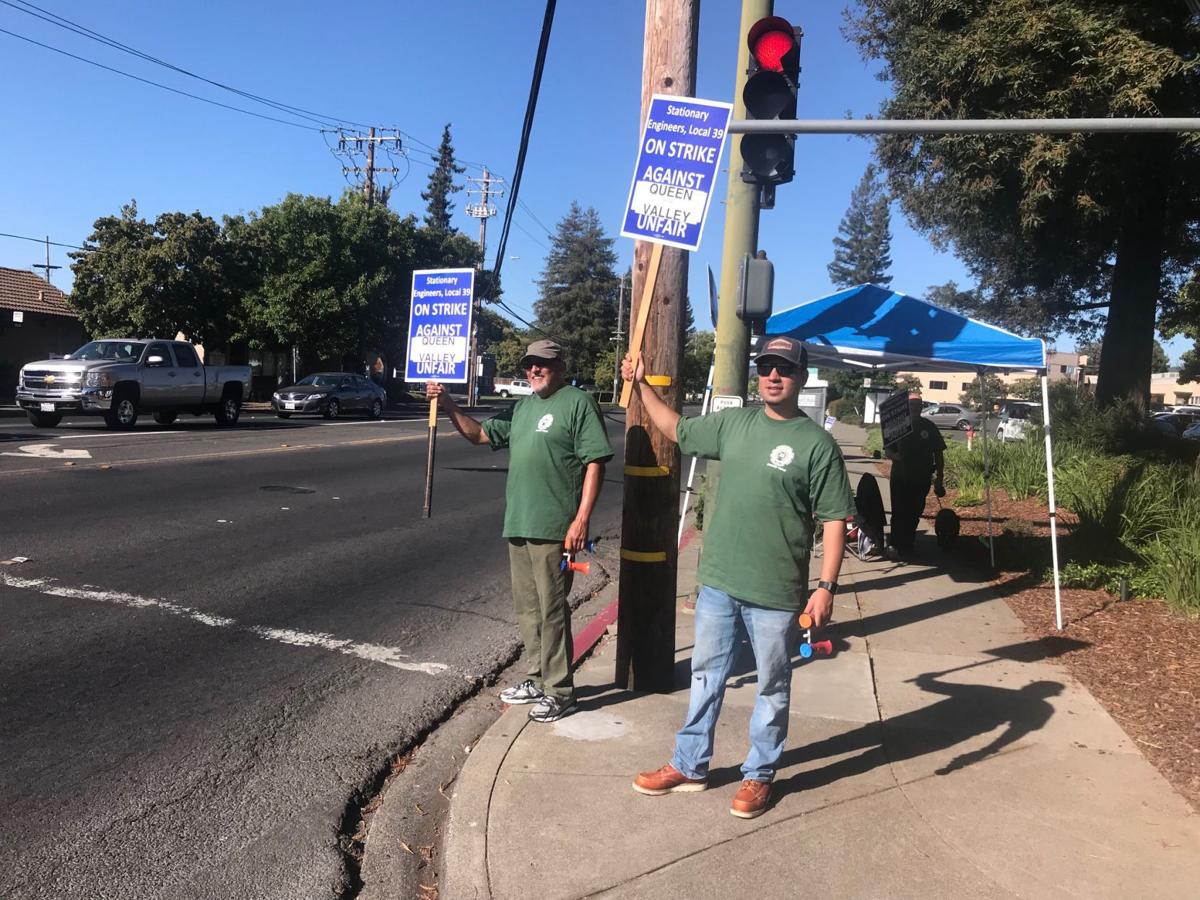 Queen of the Valley engineers began a work strike on Tuesday. They were protesting the lack of a signed union contract. The workers wanted wage and benefit improvements. A contract was ratified Wednesday evening. 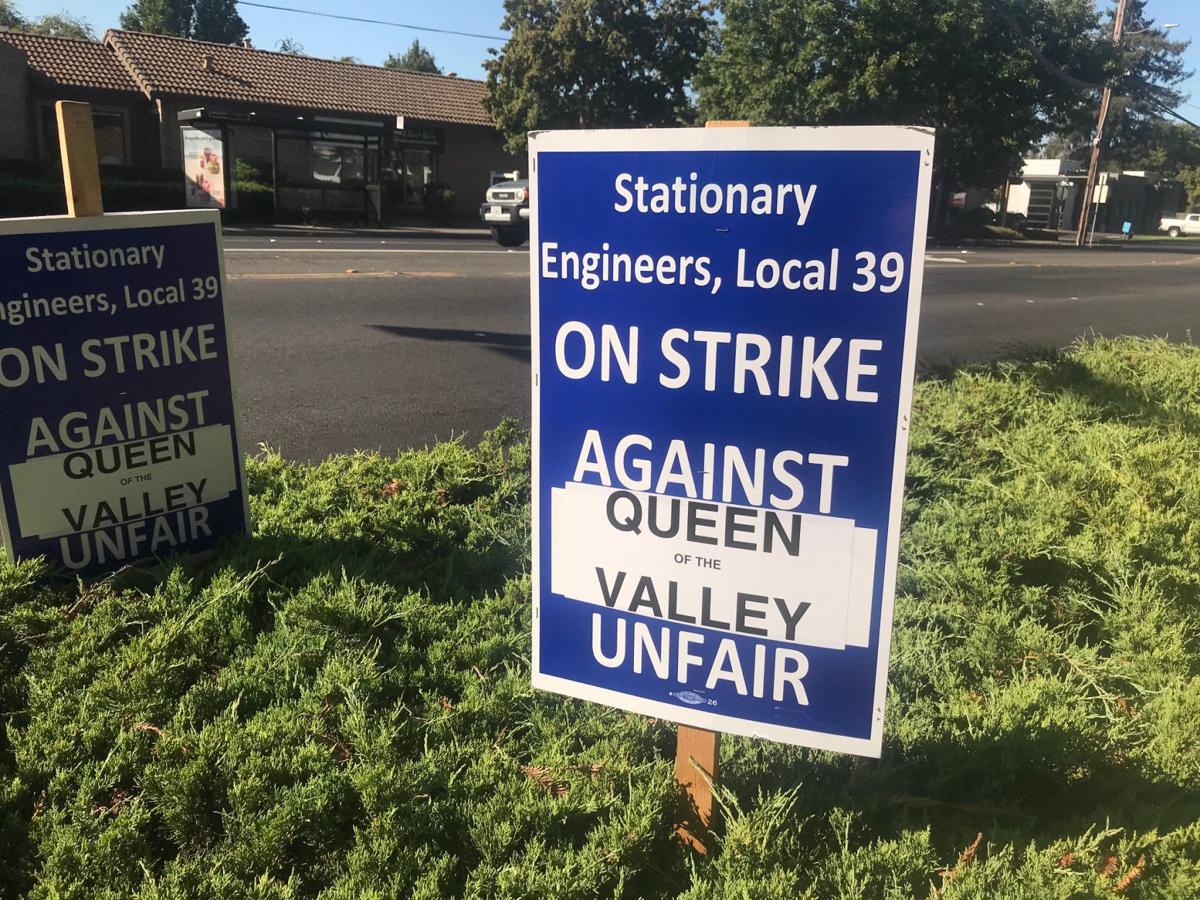 Queen of the Valley engineers began a work strike on Tuesday. They were protesting the lack of a signed union contract.

Queen of the Valley engineers began a work strike on Tuesday. They were protesting the lack of a signed union contract. The workers wanted wage and benefit improvements. A contract was ratified Wednesday evening.

Queen of the Valley engineers began a work strike on Tuesday. They were protesting the lack of a signed union contract.

Banging hammers on two metal “gongs,” honking air horns and waving signs, a group of Queen of the Valley Medical Center workers held a short-lived strike to pressure the hospital to agree to a union contract.

However, after promising to picket day and night, the strike quickly ended Wednesday evening, when Queen CEO Larry Coomes announced that a contract had been ratified.

A group of 14 engineers and two painters voted to join the International Union of Operating Engineers (IUOE) roughly 18 months ago.

The strike started on Tuesday at 6 a.m. During an interview on Tuesday, Jay Vega, district representative for IUOE Local Number 39, said the workers were on strike because “We’re looking for fair wages and a fair benefit package.”

Shortly after 6 p.m. on Wednesday, Vega confirmed that a contract had been agreed upon, but couldn’t immediately share details.

After announcing the strike had ended, Coomes issued a statement: “We are pleased that our caregivers represented by this union have ratified a new contract and that we have reached a mutually acceptable agreement.

“We look forward to welcoming back our caregivers and continuing to work together to provide the highest quality of health care to our community members and all those in need.”

The protest may have seemed familiar.

A similar picket, but not a strike, was held on the same sidewalk in front of the Queen on Aug. 22 when National Union of Healthcare Workers (NUHW) members picketed for two hours. Members of that group, which includes around 400 workers, were protesting their lack of a signed contract. Those workers voted to join the NUHW in 2016.

On Tuesday, Vega said the IUOE union and hospital representatives had been negotiating their first contract for 18 months.

“We’ve spent enough time at the bargaining table” without reaching an agreement, Vega said during a phone interview.

“We’ve reached a point where we’re not making the type of progress we want to make. Enough is enough.”

Enrique Ruvalcaba has worked as an engineer at the Queen for 11 years.

“They don’t appreciate what we do,” he said of the hospital administration before the strike ended. “We are not asking for anything special,” but they do want a competitive wage.

Yes, it’s awkward being on a strike and picketing in front of his employer. “It’s scary,” said Ruvalcaba before the end of the strike. “I’m afraid of repercussions,” he admitted. “But what we are asking for is fair.”

On Wednesday morning, the only visible response from the hospital administration to the strike was a hospital security vehicle parked in an adjacent lot, staffed by several security people.

The Queen, which first opened its doors in 1958 when it replaced Napa’s Parks Victory Memorial Hospital, is now a Providence St. Joseph hospital.

Providence St. Joseph is the process of creating a new partnership between its Northern California hospitals and several belonging to Adventist Health.

Queen of the Valley is negotiating in good faith with union

For more than 60 years, St. Joseph Health, Queen of the Valley Medical Center has provided high-quality health care in Napa. We know that our …