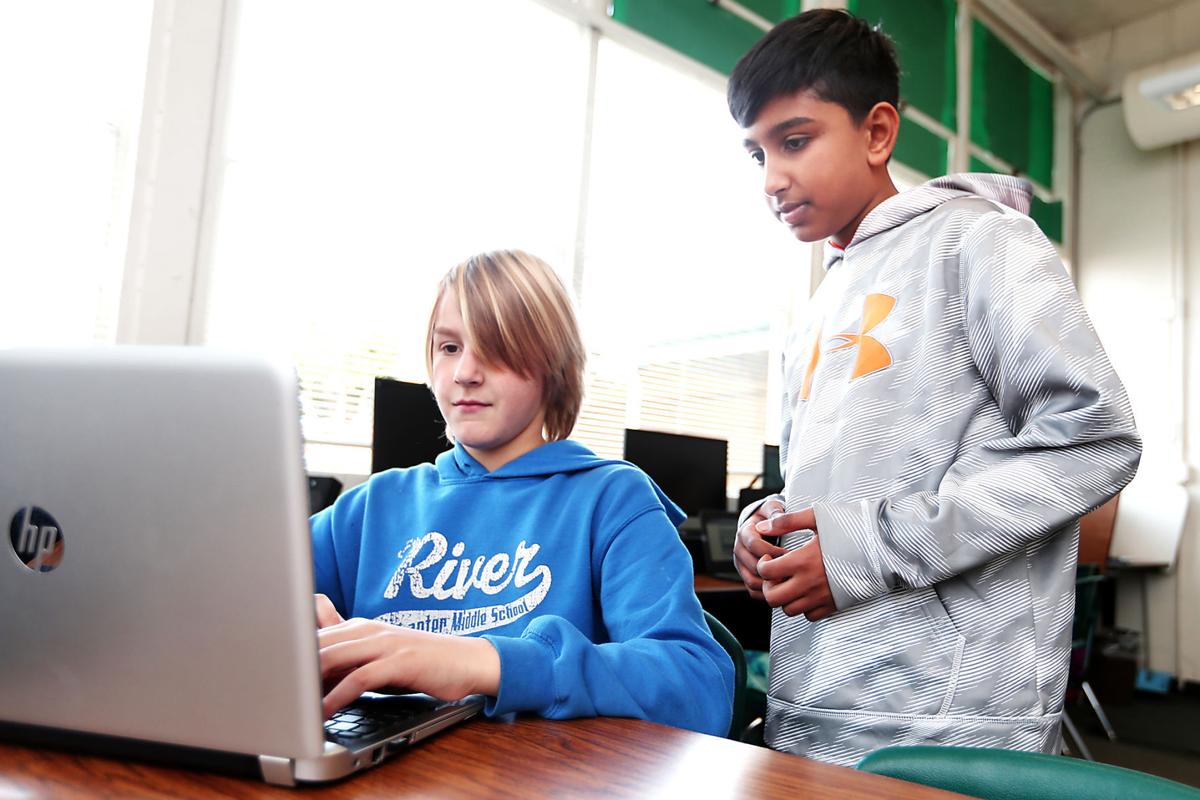 Hassan Shafi, right, is a 12-year-old student at River School who is teaching an enrichment class to fellow students on computer coding. He began helping classmates with coding when he was in the third grade. He works with student Ozzie Troedson, 12, during a recent class. 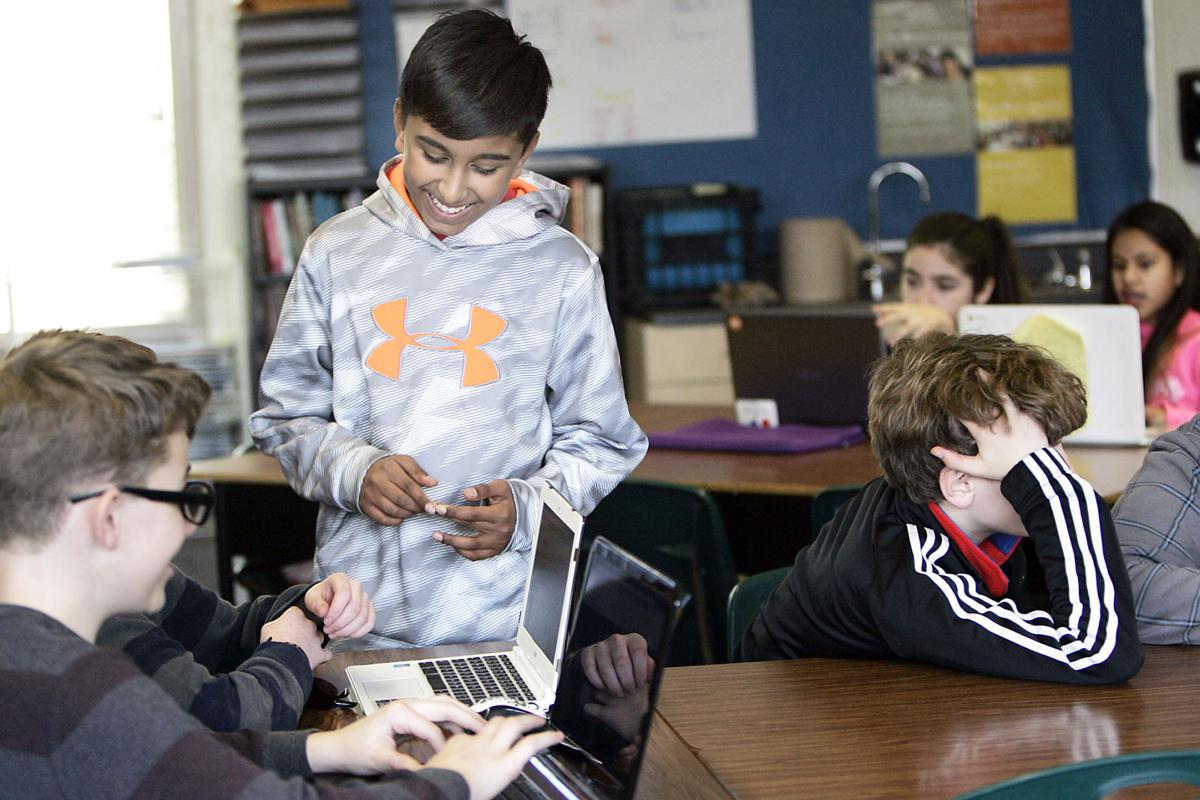 Hassan Shafi, standing, is a 12-year-old student at River School who is teaching an enrichment class to fellow students on computer coding.

When Hassan Shafi asked to take over his sixth-grade computer coding class last year, his school not only said ‘yes,’ they asked him to do it again this year.

Shafi, a seventh grader at River School in Napa, started the coding class/club as a part of the school’s enrichment program.

The first student at his school to instruct an enrichment class, the youth is currently leading a class of 25 to 30 students four days a week.

“My mother said the best way to learn is by helping others,” said Shafi. Besides, “It’s fun to teach when you’re a kid,” he said.

It turns out that Shafi is an experienced teacher. He began instructing his friends in the art and science of coding at age 8 when he was a third grader at Donaldson Way Elementary in American Canyon.

Shafi said he was motivated to learn coding after hanging out with programmers at his father’s office at Monster Products, Inc. and watching them work.

“I really liked that,” Shafi said.

The young student has also attended computer language coding camps, where he was sometimes the youngest in the group.

He decided to start teaching his own class because “all my friends were asking” about those camps and coding.

“I wanted others to learn what I learned,” he said.

Shafi may be the teacher of the class, but “I’m not a bossy person,” he said. “I prefer to let the kids make their own schedule. I let them choose” what they want to work on. “I trust that they are responsible” to do the work.

Indeed, it is each student’s choice to take the coding class. The session is part of the school’s enrichment program, and does not take away from any mandated instructional minutes.

“I have a good group of students,” Shafi said. “They respect the learning environment.”

At the same time, he takes his responsibility seriously. “I don’t want kids to fool around,” he said.

If he did find a student who wasn’t doing the work, he’d try to talk to them first, Shafi said. “I’d give them a second chance. I don’t want to send them to the office. I hope it doesn’t happen.”

Shafi is bright. His mother, Aisha Nasir, recalled that from early on it was apparent that her son was a fast learner.

“When he was about 3, that’s when I first noticed” his capabilities, she said. When teaching her son things like the ABCs, rhymes, numbers and songs, “I’d show or tell him once,” and that was all it took, she said.

At the same time, Nasir said she doesn’t want to pressure Hassan personally or academically.

“When learning become stressful, then kids just lose interest,” she said. “That’s what we don’t want.”

The family’s approach seems to be working.

Hassan gets all A’s at River School. He’s already skipped a grade in math, studies Mandarin and French independently and participates in a ninth-grade online language arts class. He also plays in a basketball league.

Shafi said he hopes to complete his high school credits in two to three years and then attend Stanford, Harvard or Yale.

Being a student teacher is an advantage, the middle-schooler said.

His classmates know him, Shafi said. “It’s me that’s teaching – one of their peers.”

But Shafi said he’s also learning from his classmates at the same time. “They teach me new ways of thinking about coding,” he said.

His goal for the students is that they learn programming languages including Java, Javascript, Ruby and possibly others.

“I want them to be self-motivated and to actually like coding,” he said.

“You have to remember a few algorithms,” but those skills can be applied to math and even language arts, he said.

Meredith Fishleder, one of Shafi’s seventh-grade students, said it was interesting having a student teach a class.

“I’m used to adults” being in charge, she said. “But it’s more easy to relate to him as a teacher” because they are both the same age and have the same experiences.

“It’s cool to know a student can teach us,” said Breanna Villa, also in seventh grade. “He’s a good teacher.”

Her only advice to Shafi was that he could be tougher and get the students to do even more work than they already are, she said.

Alannie Villanueva said she didn’t realize when she chose the enrichment class that it would be taught by a student. However, after starting the class, “I was impressed.”

“It’s not normal for a student to be teaching a class,” said seventh grader Ryan Schmidbauer. “I was afraid it wouldn’t be that educational, but it is.”

Tracy Moskowite, a teacher at River School, co-manages the class with Shafi.

“Research shows that kids retain more when they learn from their peers” than from instructors or other adults.

Shafi is “very bright,” she said. “He’s academically curious, willing to explore and has a sense of focus.”

“He’s also very patient,” she noted. Shafi keeps his students focused on what they are learning but also “has respect from his peers.”

The miniature robot on wheels rolled along the hallway floor at Redwood Middle School, twisting and turning on command. But this was no kid’s toy.

Hassan Shafi, right, is a 12-year-old student at River School who is teaching an enrichment class to fellow students on computer coding. He began helping classmates with coding when he was in the third grade. He works with student Ozzie Troedson, 12, during a recent class.

Hassan Shafi, standing, is a 12-year-old student at River School who is teaching an enrichment class to fellow students on computer coding.