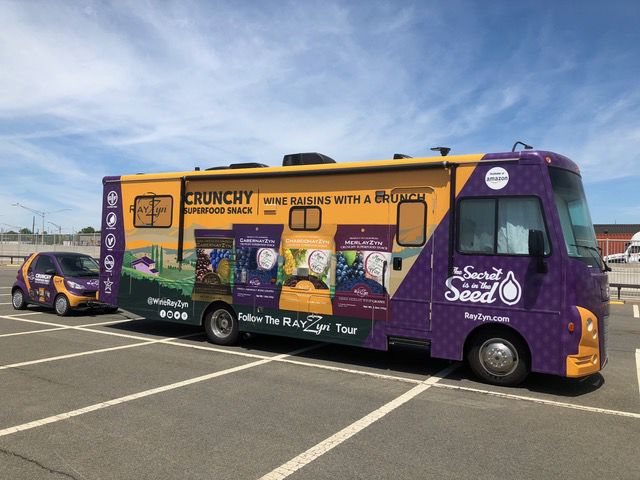 The Rayzyn Rig and the 'rayzynette', which Andrew Cates drove through the country to promote the company. Cates lived in the rig following the loss of his home in the 2017 wildfires (though the rig itself has since suffered damage in a car accident). 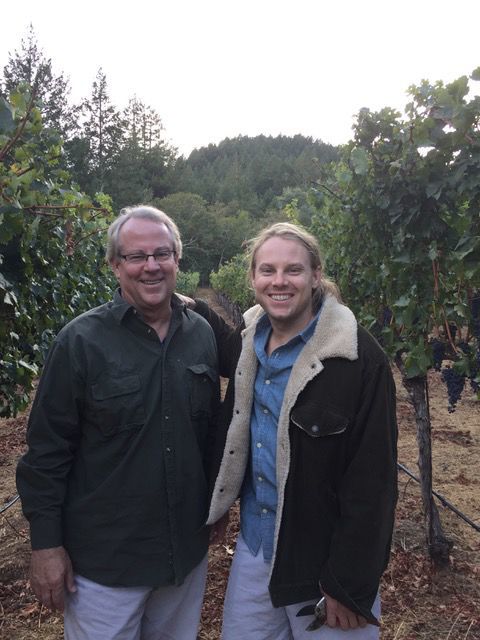 Chris Cates, left, with his son Andrew, who lost his home and 40 percent of his Mount Veeder vineyard in the 2017 wildfires. The Cateses turned their remaining crop of wine grapes into raisins for their company Wine Rayzyns, which has since continued to grow. 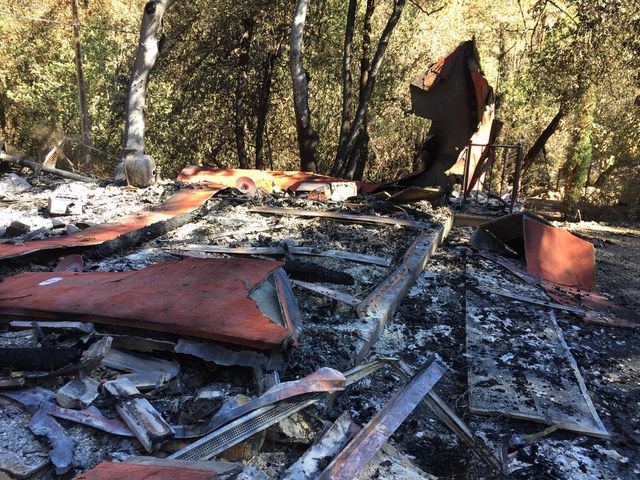 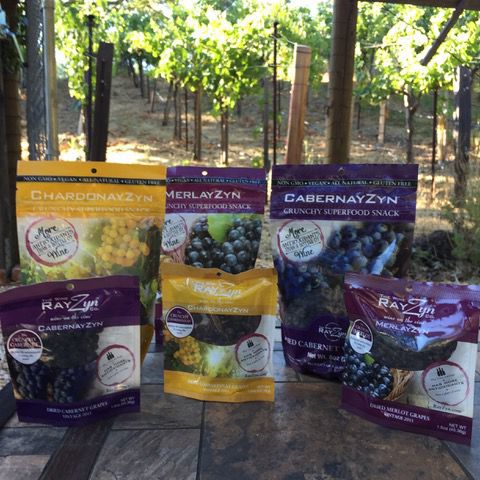 Wine RayZyn is working on expanding its product line; one 1.6 ounce package of wine grape raisins has as many antioxidants as 100 pomegranates, according to the Cateses. Pictured here: ChardonayZyn, MerlayZyn and CabernayZyn (trademarked names for the company's products).

The Rayzyn Rig and the 'rayzynette', which Andrew Cates drove through the country to promote the company. Cates lived in the rig following the loss of his home in the 2017 wildfires (though the rig itself has since suffered damage in a car accident).

Chris Cates, left, with his son Andrew, who lost his home and 40 percent of his Mount Veeder vineyard in the 2017 wildfires. The Cateses turned their remaining crop of wine grapes into raisins for their company Wine Rayzyns, which has since continued to grow.

Wine RayZyn is working on expanding its product line; one 1.6 ounce package of wine grape raisins has as many antioxidants as 100 pomegranates, according to the Cateses. Pictured here: ChardonayZyn, MerlayZyn and CabernayZyn (trademarked names for the company's products).

At least that’s what buyers were telling Cates following the wine county fires in 2017. Those same fires would ultimately claim his home and much of the land at Segassia Vineyard, the Mount Veeder property his family purchased in 2013.

Three-hundred-year-old redwoods burned, leaving the landscape charred and changed. There were other little tragedies: the fire destroyed a 140-year old grapevine from the original vineyard, library wines, countless possessions.

It was a tremendous loss for Cates and his family – one made worse by the news that even the surviving wine grape crop would be lost to the fires.

“For all the passion, the expense and the effort – everything you’re doing to cultivate those grapes, and then your harvest is no good. It was really devastating,” Cates said.

Buyers feared smoke taint, but 60 percent of the grapevines on the property had made it out of the fires with their grapes intact. Cates couldn’t watch them go to waste. His thoughts went immediately to Wine RayZyn, the company he and his father, Chris Cates, had begun in 2014.

The two had often lamented the waste involved with green drop, a process during which a few grape clusters are selectively clipped off to increase the quality of remaining fruit. They’d collect the clusters, sometimes eating the grapes themselves, and wondering if there was a way to share the health benefits of the fruit – wine “in food form”, as Chris Cates described it. The answer presented itself in raisin form.

“We in Napa take it for granted that we’re around vineyards and eating these grapes,” Chris Cates. They patented their process, leaving the skins and the seeds, which are toasted and caramelized.

“That’s where all the health benefits are,” Cates added. He worked for years as an interventional cardiologist at Emery University in Atlanta, placing stents in patients’ arteries to prevent stroke. Even in his career in medicine, Cates was drawn to wine: it was the French Paradox, he said, that first grabbed his attention.

“The French were living longer than Americans, even though they ate butter and smoked,” he said, citing research released in the 1970s that showed low incidence of heart disease in French people. “Wine was the big critical factor there. I, like every other cardiologist in America, became an immediate wine lover. I prescribed red wine to patients for years.”

Following the crop’s rejection, Andrew Cates said, his first thought was that he probably wasn’t alone, that there were others with grapes still on the vine. They reached out to neighboring vineyards.

Their suspicions confirmed, the Cateses mobilized. They hired workers whose harvest seasons had been stymied by the fires. They reached out to strings of neighbors, who donated their remaining crop, and to Food Rescue Network, a nation-wide nonprofit whose mission is to prevent food waste. Ultimately, Wine Rayzyn partnered with Food Rescue Network to create Rescue Rayzyns. For every purchase, $1 would be donated to charities reducing food waste and aiding California wildfire victims.

In the end, something like 150 tons of grapes were harvested, including those that remained on the vine at Segassia. There might have been more, according to Chris Cates, but working under tight harvest deadlines and with a limited amount of labor and resources made for a challenging end of season.

There’s continued interest in the product on the supply side, as wildfire after wildfire produces grapes, like Cates’, that won’t be used by the wine industry. Smoke taint only surfaces after the fermentation process, meaning smoke impacted grapes are perfectly good for raisins. Following wildfires in Oregon in 2018, Wine Rayzyn received calls from growers in the state offering up their grapes; limited resources meant the company was unable to go through with the harvest there, Chris Cates said, though it’s their goal to expand that way one day.

“You can only eat an elephant in small bites, and we’re a start up company,” he added. “But we tried to put a flag in the sand and say – when tragedy strikes, what can we do to help? What can we do to set an example?”

Their company is certainly unique in its mission. There is some overlap between grape varietals used for wine and raisins. Muscat is sometimes also used for raisins, though not commonly. (95 percent of raisins are produced from the Thompson seedless varietal).

It’s a tough market for raisins, which have struggled to maintain sales numbers in the 21st century. A prominent ad campaign in the late 1980s featuring clay-mation California Dancing Raisins and Martin Gaye’s “I Heard It Through The Grapevine” sent raisin sales at the time spiking. Inter-industry feuding spelled the end for the campaign, and as alternative snack foods continued to flood the market, industry numbers flattened and shrank.

But the Cateses bill their product as a “super food” – a label that’s made other products, like kale, avocados and acai, trendy for consumers and distributors. And the company says it comes armed with the facts.

“Everyone talks about super foods – there’s more scientific date about wine, wine grapes and wine grape seeds and the health benefits that translate to actual treatment and prevention of disease in human beings than in all other foods combined,” Chris Cates said.

The company has continued to grow since 2017. Their dark chocolate CabernayZyn, the company’s most popular product, was selected by United Airlines for its first class baskets; the product is “the number one snack” at Microsoft’s corporate campus, Andrew Cates said. And the RayZyns (a trademarked name) have become Cates’ livelihood, a kind of silver lining of the immense losses he endured in the fires.

“This process, in the wake of something so negative and disastrous, has helped us heal,” Andrew Cates said.

Wine Rayzyn is still in its early stages, Chris Cates said. The company is not yet fully profitable, though Chris Cates says it’s poised to enter that stage after a year of significant growth. The company launched a chocolate cabernet truffle this year, expanding upon its current products (MerlayZyns, CabernayZyns, both dark chocolate covered and regular, and ChardonayZyns) and has a sea salt carmel ChardonayZyn and greek yogurt MerlayZyns in the works.

The Cateses say a single 1.6 ounce pack has as many antioxidants as 100 pomegranates.

Wine Rayzyns are available at 5,000 or so distributors nationwide; in Napa, Whole Foods, Robert Mondavi Winery, Hotel Indigo and Farmstead at Long Meadow Ranch carry the raisins. So does Amazon.

Rebuilding what was lost in the 2017 fires has not come easily to Andrew. He only recently managed to get a well put in on the property; contractors have given him quotes as high as $950 dollars per square foot for a new building. In an effort to move forward, he said, he’s put “100 percent” into Wine Rayzyn. It’s been about making lemons into lemonade, Chris Cates likes to say.

“It’s been a real challenge and a test personally, but I remain optimistic and excited about the entire experience,” Andrew said. “The faster you can turn something negative into something positive, everyone’s better off.”

No. 1: Napa Sheriff's Office says motorist who died after shooting at deputy had criminal record

April 16, 2019: An out-of-control car driven by a Napa woman left the driveway at Bel Aire Plaza and crashed through the dining patio at Villa…

No. 3: Police: Bear rescued after being stranded in tree on Napa street

Jun. 1, 2019: Police, firefighters and state wildlife officers joined forces in Napa to rescue a bear that became stranded in a tree for sever…

Feb. 27, 2019: The Napa Valley escaped major flooding as the Napa River hit its plateau in the Upvalley and began receding at dawn, county off…

Sept. 24, 2019: Students at Browns Valley Elementary School gathered to remember their classmate, Addie Dominici, who was in a combination fir…

Feb. 5, 2019: A vigil is planned for Douglas D. Davis Jr., the 54-year-old Napa man who died after being attacked while riding his bike on the…

Oct. 13, 2019: PG&E is taking Calistoga vineyard owner Terry Gard to court, to seize a portion of his land for a liquid natural gas plant.

No. 10: Napa superintendent reacts to arrest of a River Middle School student after mass shooting threat

Rebuilding after the 2017 Napa County fires is slowly gaining momentum, but most lots still sit empty.