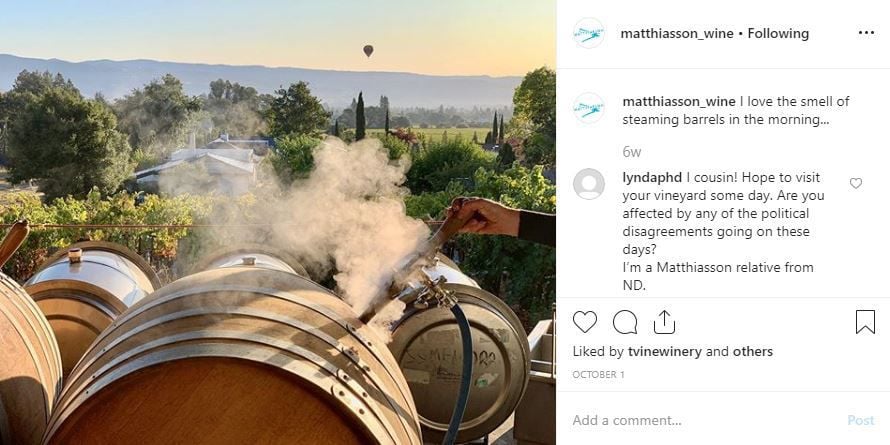 Steaming wine barrels near the end of harvest this year. Jill Klein Matthiasson and her husband, Steve, have run their Instagram account since 2012. They've garnered almost 23,000 followers since then.

One of Tank Garage Winery's Instagram posts showing the winery in Calistoga. Marketing head Ed Feuchuk says the winery does a substantial amount of customer service through the app. One of the comments on this post, not pictured, was from a follower who said they were looking forward to visiting Tank the following week. 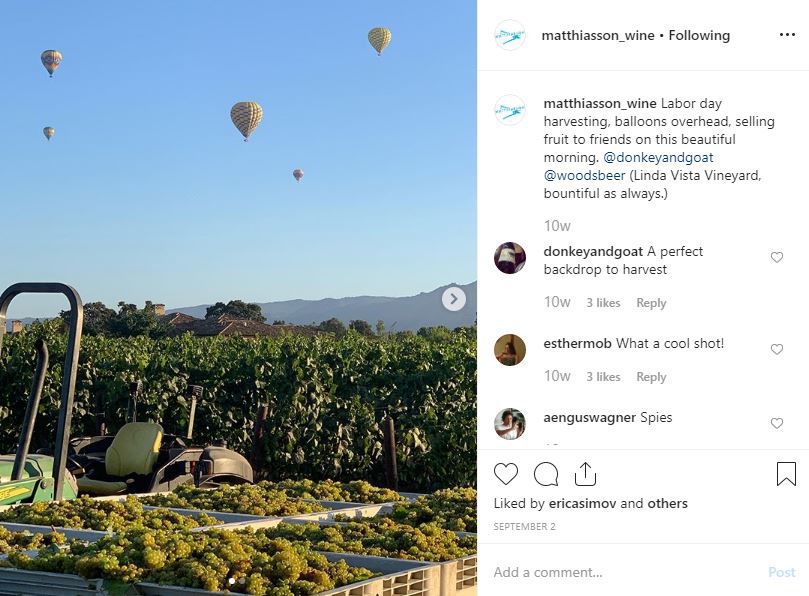 Another of Matthiasson's Instagram posts (pictured with a like from New York Times wine writer Eric Asimov). Jill Klein Matthiasson says she makes an effort to engage with each of the comments and tags she receives on the platform, often thanking posters or coordinating visits. 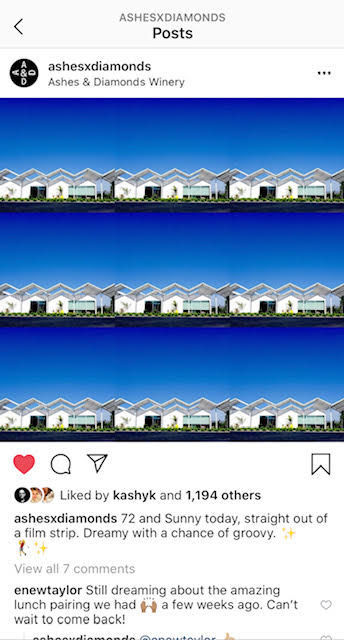 A cascade of crushed Cabernet. Dappled light over vineyards at golden hour. Wine barrels, framed by mountains and fraught with the early morning light, steaming in the cool of the new day.

These are the scenes that punctuate daily life at Matthiasson wines – and, in a second hand sense, for their 22,800 followers on Instagram.

The way co-owner Jill Klein Matthiasson tells it, she and her husband, Steve Matthiasson, stumbled into the popular social media platform in 2012. Per the advice of a friend who Matthiasson described as “at the forefront of social media” in the wine industry, they created an account.

“It was early on, and not a lot of wineries were quite there yet,” Matthiasson said of the app, which had launched two years earlier in 2010. “At that point, we were kind of frustrated as to how to best communicate our story, and it became a perfect avenue, because so much of what we do is so visual on the farm.”

Things have changed since the platform’s early days. It’s common, if not a marketing best practice, for wineries to have Instagram accounts, according to Stephen Eliasson, founder of Eliasson Marketing, which does digital marketing for wineries in Sonoma and Napa counties.

“It’s about building awareness,” Eliasson said, of Instagram. The first step, he added, is to find a “voice” on a platform highly saturated with other wineries vying for attention. “We’ve had one of our clients in Sonoma County have people come up from Los Angeles because they’d seen their Instagram account, and they wanted to experience it for themselves.”

Today the app, which has more than a billion users, is an attractive portal through which businesses can engage with potential customers. That’s perhaps even more the case for wineries, many of which are increasingly invested in their direct-to-consumer sales.

Ming Alterman, director of digital for Treasury Wine Estates, said Treasury has begun allocating money in its media budget for “influencers” in the last five years. Alterman describes an influencer as an individual with “sort of a community” on a social media platform – essentially, someone who has influence over the opinion of their followers.

That might include “super influencers,” like celebrities, but it also extends to what Alterman calls social media “microinfluencers” – of which Instagram has many. In 2015, Beringer Vineyards (a Treasury brand) partnered with influencer Murad Osmann, whose Instagram account, featuring photos of his wife leading him towards beautiful destinations, had garnered significant attention and engagement.

“He was at the top of point of being viral – everyone was looking,” Alterman said, of Beringer’s motivation to work with Osmann. “I think it was an example of seeing some of these influencers with humble beginnings on social media as a new type of celebrity.”

It all comes back to the potential to engage with customers on Instagram – part of the reason why Tank Garage Winery in Calistoga launched their account in tangent with their opening in 2014, according to Vice President of Marketing Ed Feuchuk.

They also trialed a slew of other social media platforms: Twitter, Tumblr, Facebook – even Pinterest. But “none of them felt right” for Tank, Feuchuk said – they didn’t employ communication and interaction models that Tank was able to use. Instagram was the exception.

“It’s – ‘hey, where did you find that motorcycle jacket (in your post)?’ and, ‘hey, I’m planning on coming by this Sunday,’” Feuchuck said, describing messages. A point Feuchuk will touch upon at an upcoming talk about direct-to-consumer marketing is the demographic he believes is reaching out to Tank on Instagram – primarily millennials, the industry’s notorious weak link.

“I think this is the big paradigm shift we’re facing – for so long, (wineries) did customer service on our terms: during business hours or by phone or email,” Feuchuk said. “Now, we’re having to make the shift – it’s on (the customer’s) terms, they tell us how they want to interact, and through what platform.”

It promotes consumer awareness , as “you come to understand what your audience’s likes and dislikes are,” Kashy Khaledi, owner of Ashes & Diamonds, wrote in an email.

Khaledi runs the winery’s account, which has garnered 13,000 followers since its launch in 2015. It began as a way to communicate Ashes & Diamond’s brand, “cheeky humor” and the history of the valley; now, though, Khaledi wrote, their followers use it to keep up with the winery: events, releases, and occasional looks behind-the-scenes.

Matthiasson’s Instagram following of almost 23,000 dwarfs their wine club membership (at just under 900, according to Matthiasson) and, at 10,000 a year, even their case production. Matthiasson is almost bemused at the way their following has grown on the app, a process she said was completely organic. They’ve never employed any kind of content strategy (“we don’t even know how,” she added) and the account is still run by Matthiasson and her husband.

But it’s a resource she’s grateful for. They’ve used it as a crowdsourcing tool for fundraising efforts (following damage the winery suffered after the 2014 earthquake, for instance, and to assist victims of natural disasters like the wine country fires and Hurricane Harvey). And it remains a way for Matthaisson Wines to share its story.

“We haven’t found anything as good to communicate with our audience, our customers,” Matthiasson said. “We still go out into the world and meet so many people who tell me they follow us, that they’ve seen us, and how interesting it all is. It feels important for us.”

Her 22-year-old son sometimes advises them on Instagram best practices, like creating Instagram ‘stories,’ a fairly new feature of the app (“It always seems to be evolving,” she said). For now, that’s about as much strategizing as the Matthiassons do on Instagram.

Winery websites at the heart of lawsuits over ADA compliance online

Because of a rash of lawsuits, wineries now have to ask if their websites are ADA compliant.

Retailers could soon be able to ship wine to out-of-state consumers without state restrictions.

Allen Balik, The Wine Exchange: Is it only a matter of taste?

One of the shore excursions we enjoyed during the wine-tasting adventure and cruise I hosted on Crystal Serenity in September, was a vist to t…

CellarPass is offering a passport to wine tasting experiences at 23 Napa Valley wineries for $129 a person. It is valid from Jan. 1 to June 30.

Amazon could disrupt direct to consumer sphere for Napa wineries

Amazon released its own wine label in Germany, a possible sign of what's to come for winery e-commerce.

Steaming wine barrels near the end of harvest this year. Jill Klein Matthiasson and her husband, Steve, have run their Instagram account since 2012. They've garnered almost 23,000 followers since then.

One of Tank Garage Winery's Instagram posts showing the winery in Calistoga. Marketing head Ed Feuchuk says the winery does a substantial amount of customer service through the app. One of the comments on this post, not pictured, was from a follower who said they were looking forward to visiting Tank the following week.

Another of Matthiasson's Instagram posts (pictured with a like from New York Times wine writer Eric Asimov). Jill Klein Matthiasson says she makes an effort to engage with each of the comments and tags she receives on the platform, often thanking posters or coordinating visits.