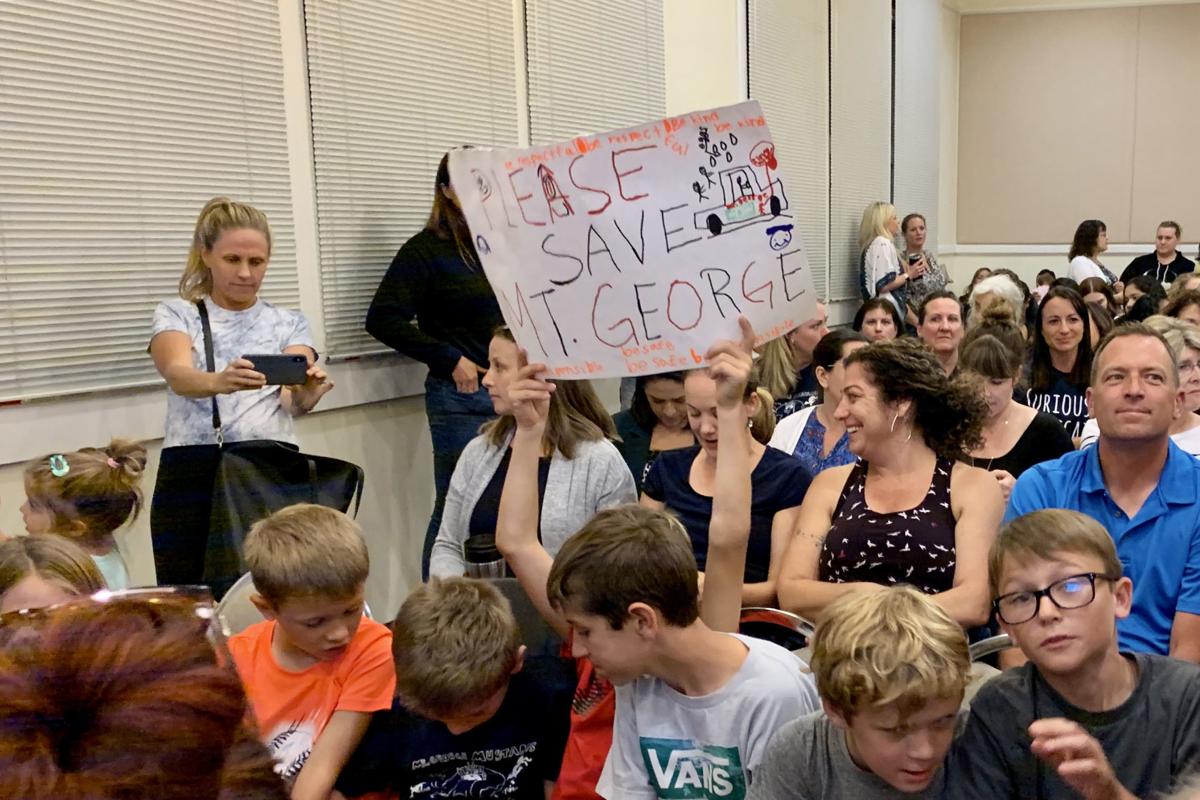 A student holds up a sign urging trustees of the Napa Valley Unified School District not to close the Mt. George Elementary School during the board's meeting Thursday night. Despite such appeals, trustees voted to wind down that school and Yountville Elementary after the school year ends in June 2020. 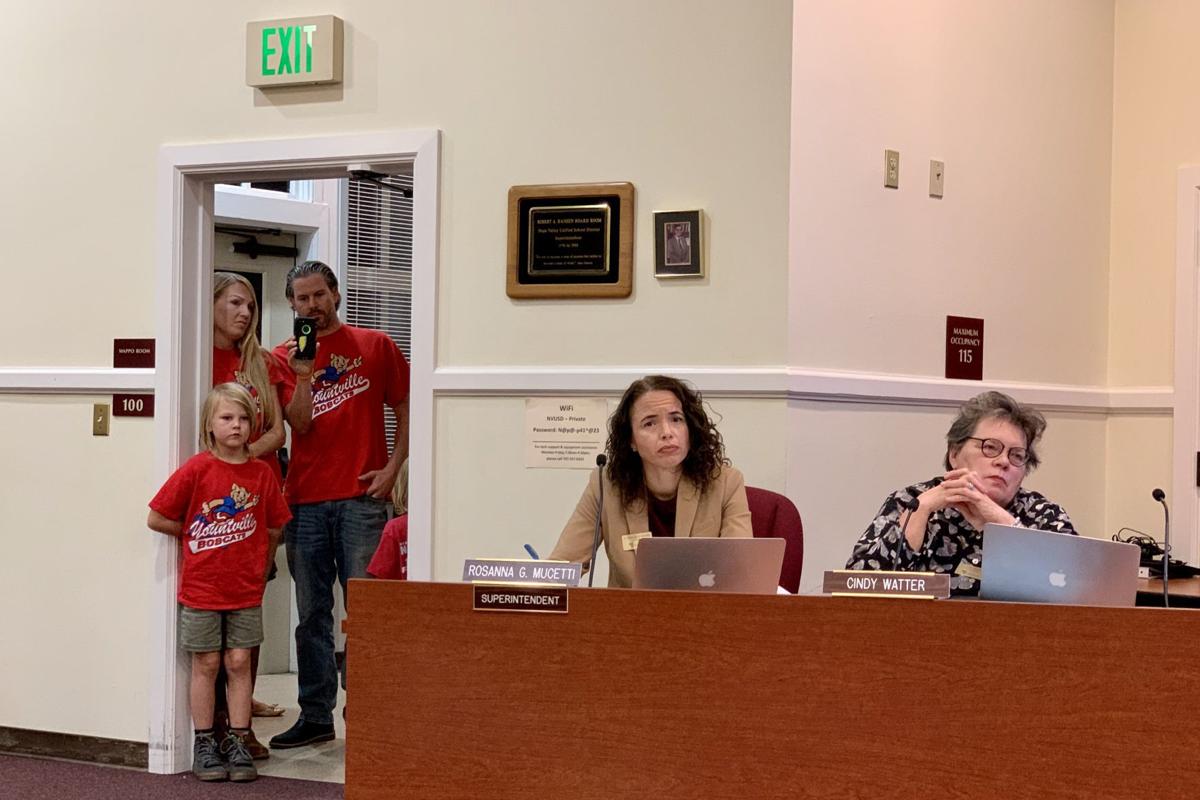 A family donning the red T-shirts of Yountville Elementary school observed Thursday's board meeting of the Napa Valley Unified School District from a doorway, joining a capacity crowd that packed the boardroom to argue against closing the Yountville and Mt. George campuses. Trustees later voted to shut down the schools after the 2019-20 academic year.

A student holds up a sign urging trustees of the Napa Valley Unified School District not to close the Mt. George Elementary School during the board's meeting Thursday night. Despite such appeals, trustees voted to wind down that school and Yountville Elementary after the school year ends in June 2020.

A family donning the red T-shirts of Yountville Elementary school observed Thursday's board meeting of the Napa Valley Unified School District from a doorway, joining a capacity crowd that packed the boardroom to argue against closing the Yountville and Mt. George campuses. Trustees later voted to shut down the schools after the 2019-20 academic year.

The Napa school district’s two smallest schools will shut their doors for the final time in June.

A large, lengthy and vocal last-ditch show of support Thursday night for the Yountville and Mt. George elementary schools – by sign-waving pupils, their parents and even their grandparents – failed to stop the Napa Valley Unified School District board from voting to close both campuses after the 2019-20 academic year. The closures will be NVUSD’s first since it wound down its grade schools in Carneros, Wooden Valley and Capell Valley in 2010.

The decisions capped four months of passionate, sometimes bitter campaigning by parents and supporters at the two schools to head off a shutdown district officials called essential to righting a deficit-wracked budget and avoiding a state financial takeover – but that skeptics said would simply drive away families needing a cozier environment or unique teaching model for their children to thrive.

NVUSD officials have estimated that operating two fewer schools will save $1 million annually, and would contribute to $7.2 million in total cuts through 2022 – a process that already has included teacher and staff layoffs. The district also has canceled a planned second middle school for American Canyon that would have broken ground this year, saying it could not spare the new campus’ $2.2 million annual operating cost.

A report issued earlier this month by an 11-volunteer committee recommended closing two of the four schools – all teaching 313 or fewer students – NVUSD had announced in June it would consider shutting down, while calling for district to keep the Alta Heights and West Park schools open. In addition to lower student counts at Yountville and Mt. George, fewer than half the pupils at each campus live in the surrounding area, with most traveling there from other neighborhoods through the district’s open-enrollment system.

Despite complimenting parents in an overflow audience of more than 100 people at NVUSD’s Napa boardroom for fervently advocating for their children’s education, trustee Robin Jankiewicz held firm in her support for the closures, describing the cost of running lower-attendance campuses an unaffordable luxury for the district. “It is our job to advocate for your children – along with 16,000 other children, and in an equitable fashion,” she said.

Toward the end of a meeting that ran to nearly four hours, trustees unanimously voted to shut down the Yountville school, the district’s smallest with fewer than 120 students from kindergarten to the fifth grade.

Six board members also supported closing the 240-student Mt. George, despite parents’ protests that its high academic achievement scores and unique International Baccalaureate (IB) curriculum would be impossible to quickly replace at another local grade school and could even drive some families to private schools and out of the district altogether.

The only dissenting vote came from David Gracia, who recommended sparing Mt. George and instead shutting down the West Park school due to lower academic metrics and a higher resale value for its land closer to central Napa.

Gracia cast his vote for Mt. George’s continuation despite his wife teaching at the school and a child studying there, saying before the vote he had consulted with the district’s legal counsel and concluded his absence of a financial interest in the school enabled him to take part in a decision.

As it had during the months of debate leading to Thursday’s vote, defenses of the Yountville and Mt. George schools took varied forms.

Some speakers questioned the district’s forecasts that the local school-age population will keep falling well into the 2020s, citing plans for various multi-family housing developments in Napa and American Canyon. Others predicted widespread defections to private schools that would accelerate the loss of state per-student payments to Napa public schools, while still others said closures cannot legally take place without studying the environmental impact of traffic-pattern changes around the schools where students would go instead. (Staff replied that such a state requirement will not take effect until July 1.)

But the bulk of parents’ pleas not to close the schools pointed to an atmosphere of small class sizes and close faculty attention they said cannot be replicated in the Napa district’s larger campuses – evidenced by a large number of transfer students they called a sign of their popularity rather than a lack of neighborhood support. The advocacy was especially strong for the preservation of Mt. George, which features an International Baccalaureate curriculum that emphasizes second-language instruction, cultural understanding and independent thinking.

District officials have said Mt. George’s IB certification cannot be transferred to another campus, and that an existing school’s staff would require at least two years of training before it can be certified to teach its own Mt. George-like program. With the school’s departure, NVUSD’s remaining IB program will be the one at Bel Aire Park Elementary.

“You are looking at a roomful of people who love their schools,” Holly Moore, the mother of a Mt. George student, told trustees as she motioned toward the capacity audience. “These are more than schools to them; these are like our families, our second homes. You’d have to experience it to understand it. I understand this is a business, but your business is about children, and children need nurturing.”

One former Mt. George student implored trustees not to force current students to absorb the consequences of the school’s bad decisions from years past.

“There are the children you’ll be affecting,” said 15-year-old Ruby Campbell, who now attends Napa High but still volunteers at her former grade school. “I’m so sad that they’ll lose their schools due to the district’s incompetence and mismanagement of funds.”

Supports of the Yountville school described it as one of the last hubs of community life in a once-rural town now largely given over to high-end tourism.

“You’re not just closing some random school in Napa,” said Maryann Ariansen, who has two grandsons attending the school. “You are closing a town school, a school that’s supported by the community, by businesses, by the Veterans Home people.”

But even those trustees who expressed the deepest empathy about the impending loss of well-loved school communities concluded the local housing supply is too scarce and expensive to attract large numbers of families with school-age children – and that the district cannot afford waiting for the market to change.

“I talk daily to farmworkers and laborers, and I’m sad to say they don’t live in the Napa Valley,” said Icela Martin, a consultant with Agricultura Safety. “They live in Yuba City (in Sutter County nearly 100 miles northeast of Napa) and leave at 4 or 5 a.m. to go to their jobs in the Napa Valley – where their kids don’t reside.”

Afterward, Martin described her votes for closing the two schools as being made with deep reluctance. “I’m truly sorry it has to be me having to make these decisions,” she told the audience.

Under the plan recommended by NVUSD’s volunteer committee, the district will merge the Yountville school’s home territory with that of Willow Elementary School, 7 miles away in north Napa, starting in August 2020. Mt. George’s zone will be combined with the territory of the Alta Heights school 2 miles west.

The committee endorsed shifting student bodies to their successor schools by default – including pupils whose families opted into Mt. George and Yountville from other campuses – while also allowing parents to pursue open enrollment to place their children elsewhere in the district. Open enrollment begins Monday, having been postponed from Oct. 1 ahead of the board’s school closure vote, and will continue through Nov. 29.

Update: Napa school district offers to keep student bodies together at other campuses if schools close