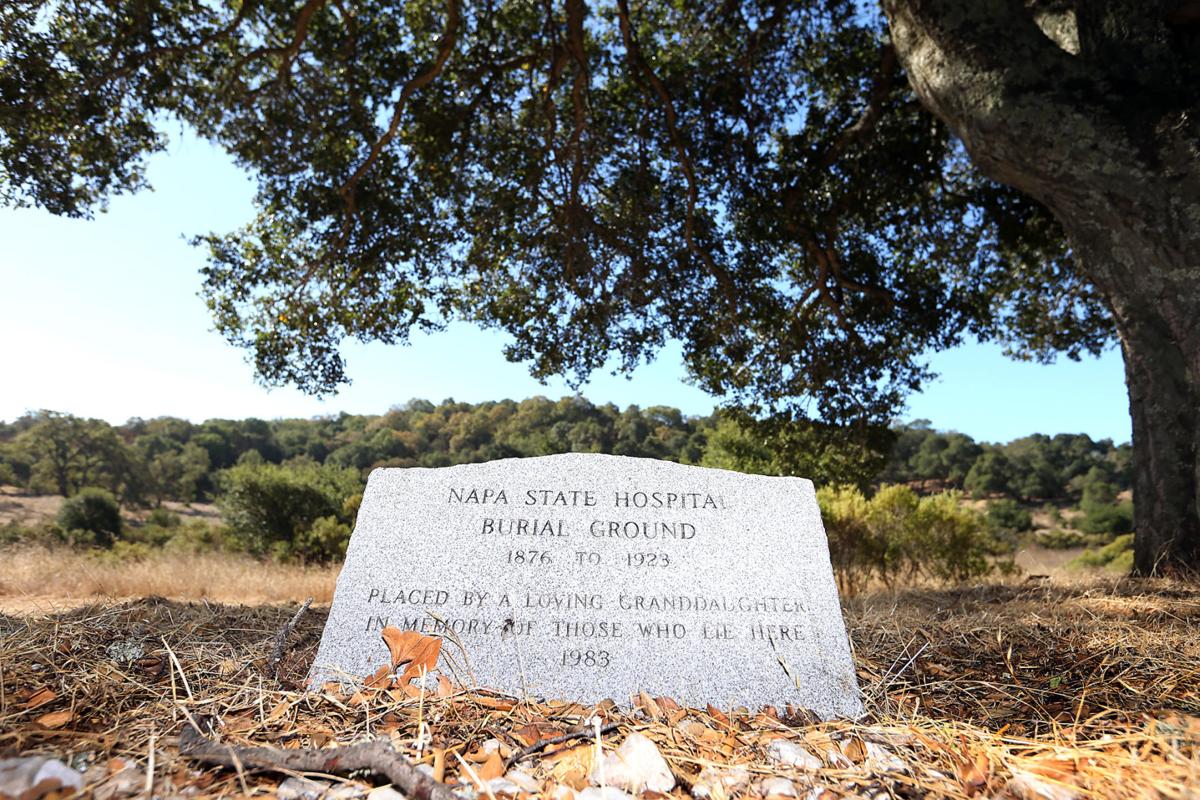 A marker at Napa State Hospital recognizes a burial ground on hospital property that was used between 1876 and 1923. A ceremony on Monday recognized patients who have died at the institution. The California Memorial Project held a number of ceremonies throughout the state on Monday, called a Day of Remembrance to honor individuals who have died at state hospitals and are buried without recognition. 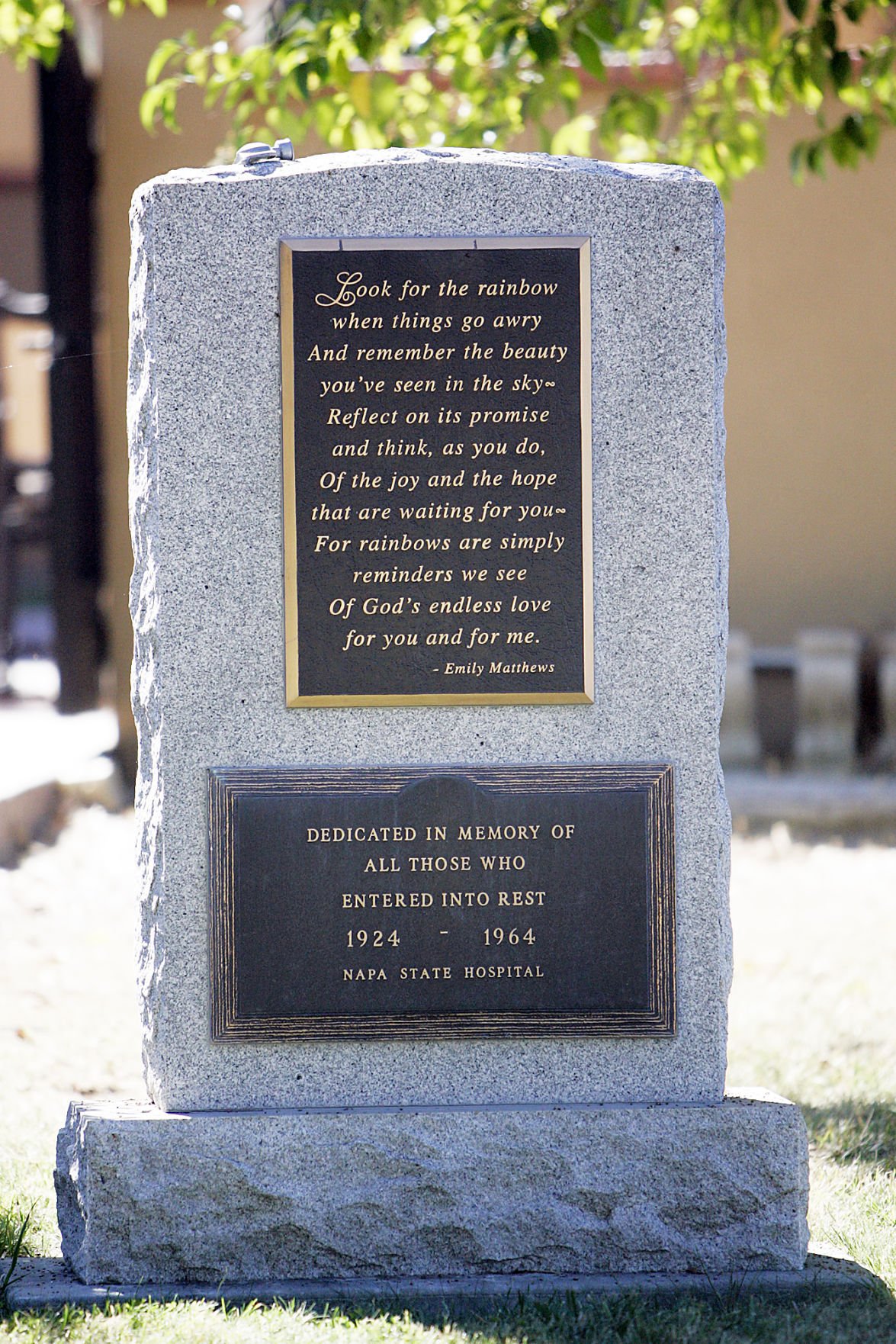 A marker at Napa Valley Memorial Park Cemetery on Highway 221 honors patients who have died at Napa State Hospital. Patients' remains were once buried on hospital grounds. Remains have since been moved to this cemetery.

For decades, patients who entered the gates of California mental hospitals were all but cut off from the rest of society – even after death.

From the 1880s into the 1960s, the lives of about 45,000 patients at Napa State Hospital and other state institutions ended not with a casket and headstone, but with unmarked graves or the scattering of anonymous ashes in obscure fields.

To bestow some belated dignity to those denied it after their deaths, advocates for the disabled mark the third Monday each September to honor those who died while institutionalized. On Monday, one of the nine statewide ceremonies staged by the California Memorial Project brought together present-day patients at Napa State Hospital to commemorate the patients who came before.

“Let us work to build a world where no person is removed from the community due to disability,” Yvonne McGough, a Disability Rights California representative, told an audience of three dozen patients during the hour-long remembrance in the Napa State gymnasium. (The organization also sponsored observances as far north as Ukiah and as far south as Norwalk and Patton, in Southern California.)

McGough then explained the extent to which generations of Napa patients were extinguished in death: 4,363 burials on the premises from 1875 to 1923, followed by thousands who were cremated or placed in a St. Helena potter’s field.

After a small patients’ choir serenaded their comrades with “Amazing Grace” and “Lord, I Lift Your Name on High,” other residents took time to remember their departed friends with stories or poems, including one describing the release of death: “Don’t grieve for me now; I’m free, following the path God made for me.”

The observance wound down with McGough’s naming of the 15 Napa State patients who have died in the past year – including a man who had expired just that morning.

Napa State’s observance dates to 2002, when Disability Rights California and two other advocacy groups partnered to form the California Memorial Project. In addition to staging the annual ceremonies for the dead, the team restores graveyards holding the remains of institutional patients, places monuments at burial grounds, and collects oral histories of former patients.

After the Monday ceremony, two visitors stepped through a gate and toward the burial ground – McGough and a fellow advocate, Katie Meyer, bearing a box of roses.

“If we didn’t do this, there wouldn’t be any flowers, anyone here to remember,” said McGough as the women stopped at a broad live oak whose canopy once shaded the graves that have since been relocated. First the white roses, then the red and finally the yellow were laid slowly, carefully in a ring around the tree trunk – the only touch of color amid the arid landscape.

For one day, the lost patients of Napa State Hospital were not forgotten.

The cul-de-sac of Industrial Way was closed for several hours Wednesday after the discovery of a body, according to Napa police.

The county's lawsuit asserts that the A-frame home on Mount Veeder Road is being rented for $975 a night.

An autopsy scheduled for Friday should help police determine the cause of death, police said.

The lawsuit is in response to the officer-involved shooting of Juan Garcia after a traffic stop last October in south Napa.

An American Canyon resident convicted on multiple domestic violence counts has been sentenced to 22 years and four months in state prison.

A new report says some clinic workers felt pressured to give Supervisor Belia Ramos a COVID-19 vaccination in January because of Ramos' presence at the clinic.

BottleRock Napa Valley is a go for Labor Day weekend

The California Highway Patrol helped fly the lake user to a local hospital.

A marker at Napa State Hospital recognizes a burial ground on hospital property that was used between 1876 and 1923. A ceremony on Monday recognized patients who have died at the institution. The California Memorial Project held a number of ceremonies throughout the state on Monday, called a Day of Remembrance to honor individuals who have died at state hospitals and are buried without recognition.

A marker at Napa Valley Memorial Park Cemetery on Highway 221 honors patients who have died at Napa State Hospital. Patients' remains were once buried on hospital grounds. Remains have since been moved to this cemetery.