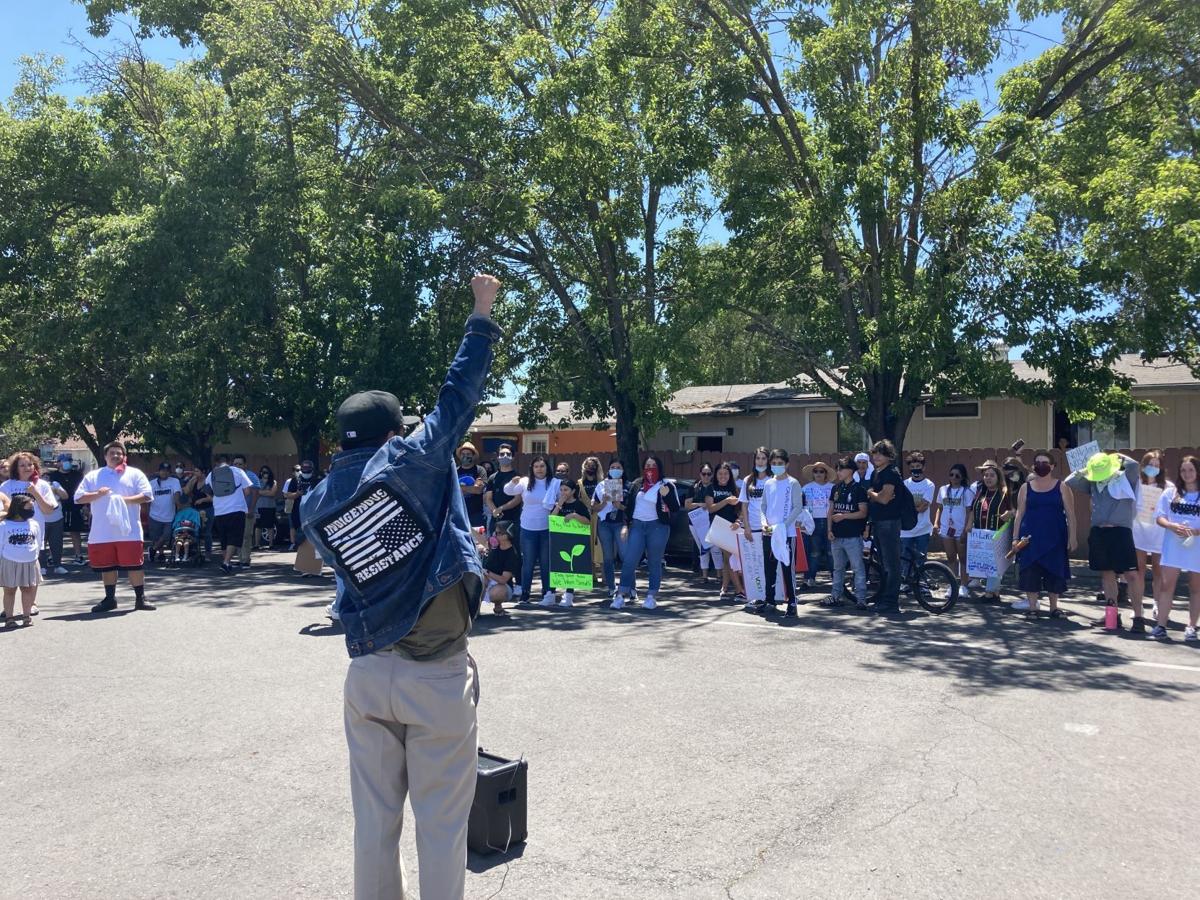 Kevin X speaks to the crowd at Vintage High School before marching to NVUSD offices on Jefferson Street. 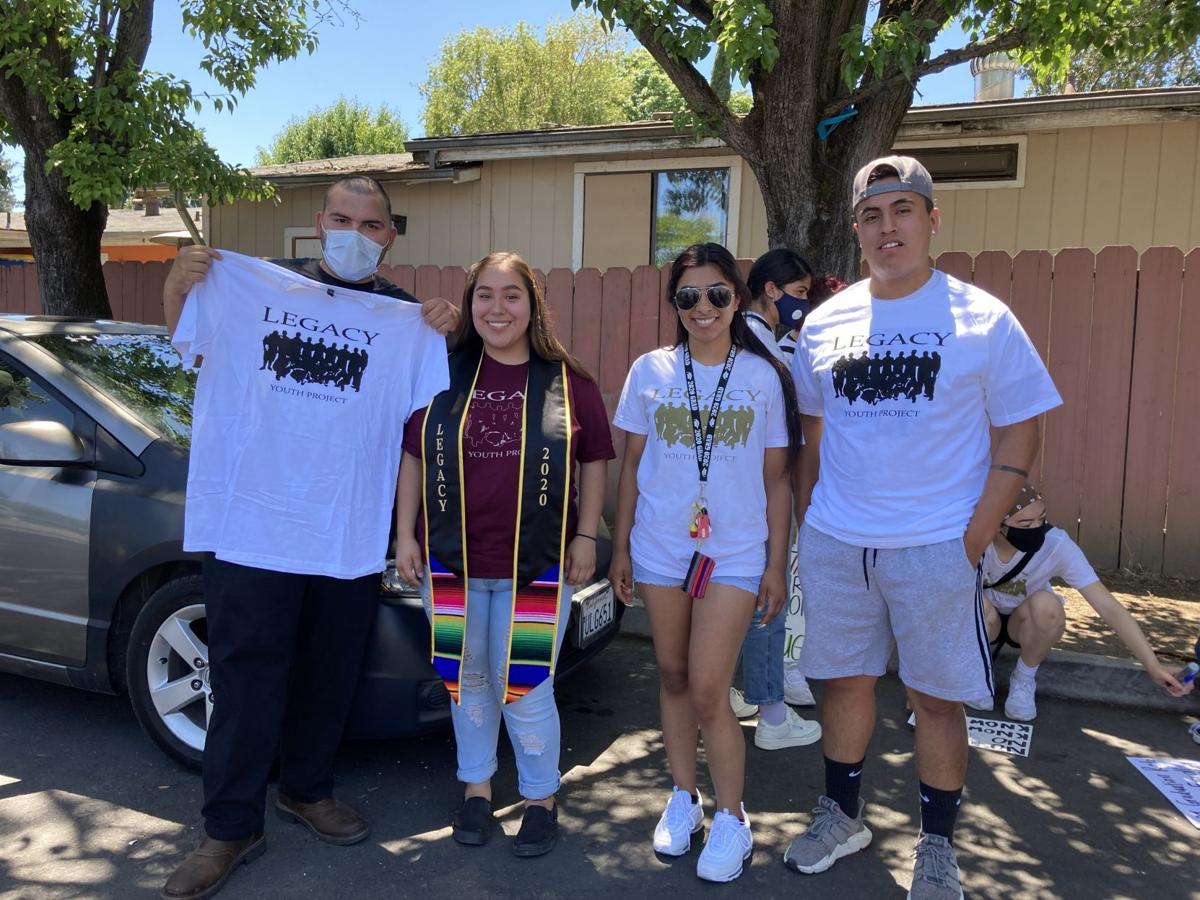 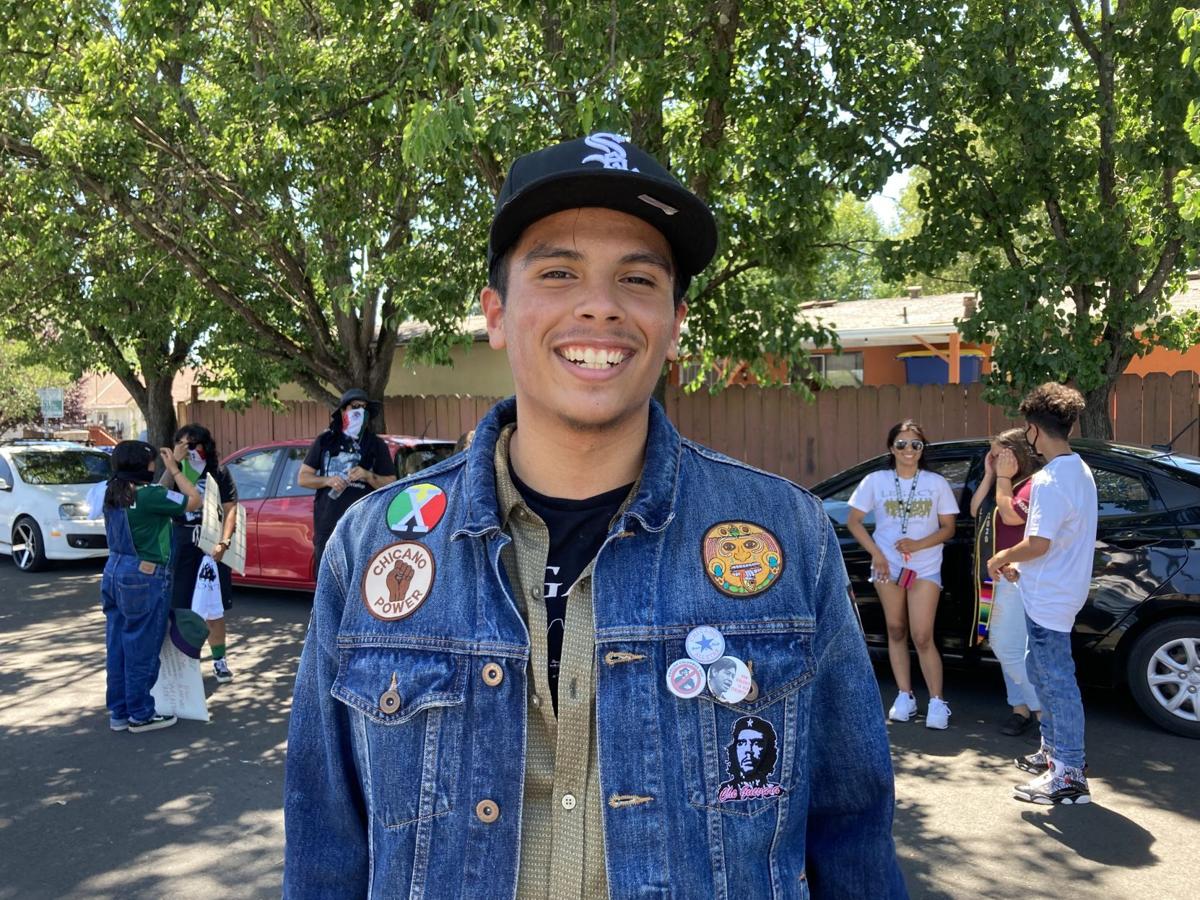 Kevin X planned Thursday's protest to save the Legacy Youth Project, which was recently cut by the Napa Valley Unified School District.

Students of all ages on Thursday afternoon marched from Vintage High School to Napa Valley Unified School District’s (NVUSD) offices in Napa to protest the cancellation of the Legacy Youth Project.

Joined by a smattering of parents and teachers, students paraded down Jefferson Street in the afternoon heat, chanting, “Keep Legacy! Keep Legacy!” and waving signs as cars honked their support.

Vintage High School students were joined today by both graduates and younger peers to protest the cancellation of @LYPheartwork, which has for the last 8 years empathized supporting underserved demographics in the district. Story on the way for @NapaRegister. pic.twitter.com/OJrn8WR5j8

The program, which is offered as an elective course at Vintage High School and has established itself at a handful of the district’s middle schools, began in 2012 to meet the needs of Vintage High School’s diverse student body, according to NVUSD Superintendent Rosanna Mucetti. Public K-12 school systems do not often reflect the diversity of their own student bodies, the superintendent said, which can make those students feel culturally disconnected from their curriculum and their classmates.

“Programs like Legacy Youth Project allow students not to have to leave their culture, language or identity outside the threshold of school doors,” Mucetti, the first female and first Hispanic superintendent, said, adding that the program’s philosophy and mission are ones the district supports wholeheartedly.

But in trying to curb the district’s “structural deficits” – which Mucetti partially attributes to declining enrollment – the district has been forced to essentially audit the way it operates in the hope of running more sustainably. In the context of those deficits, the decision to cancel Legacy Youth Project was a difficult one, Mucetti said, and a multi-faceted one at that.

The course is taught by non-credentialed staff who are not technically NVUSD employees, but who are paid as outside contractors. The cost of the program, in which 118 students are enrolled, is almost $250,000 per year. That represents the average cost of a salary and benefits for two teachers, she said.

“I can’t design, implement and support programs that are based upon these kinds of contingencies,” Mucetti said, noting interest in bringing the kind of curriculum created by Legacy Youth Project to other NVUSD high schools. “Another important piece of building transformative courses for underserved youth is to build sustainable, replicable structures and systems. At this rate, the program will stay small, because it is not replicable or sustainable when you start to lay out the parameters.”

The district and Legacy Youth Project had been unable to reach an agreement as to how the program could move forward while addressing financial concerns, she said, as well as concern from the teacher’s union over the course’s dependence upon non-NVUSD staff.

Legacy Youth Project Director Carlos Hagedorn, an adjunct professor of humanities at Napa Valley College who has led the course since its inception, described attempts to work with the district to “find solutions” before it announced the cancellation of the course Monday. That included potentially training NVUSD teachers to help orchestrate the course, he said.

“Up until this past May, we were a big part of the district’s solution around ensuring all students’ needs were being met,” Hagedorn added.

Thursday’s protest was organized by Kevin X, a rising senior at Vintage High School who said he felt called to action by the news that Legacy Youth Project would end at the end of this school year.

“It has transformed not just my life, but the lives of our people,” he said, adding that the number of protesters present spoke to the importance of the course.

Daniela Barboza, a member of Vintage High School’s class of 2020 who became involved with Legacy Youth Project in 2018, and said the discontinuation came as a surprise to the course’s students. Hagedorn had encouraged Barboza to get involved with Legacy Youth Project. Ultimately, it helped her to come out of her shell and gain confidence in herself, she said, and she’d come to the protest in hopes of preserving the course for students younger than herself.

“It’s like your second home – you can talk to your peers about your feelings, about how your day is going, and you can truly express yourself,” Barboza said of the class.

The district had spoken with Hagedorn about potentially transforming the class into an after-school program, according to Mucetti. Asked if that would be a viable alternative, Barboza shook her head.

“It wouldn’t be as beneficial as it is right now,” she said, citing students who play sports or work after school. “Legacy helps you to stay in class and stay in school – looking forward to that class makes the whole day better.”

Legacy Youth Project supports underserved students by offering a curriculum based on college readiness, leadership development, identity and academic support, according to Vintage High School Principal Sarah O’Connor, who was at the protest on Thursday. Though Legacy Youth Project may not continue, O’Connor said, there are plans for the 92 students who were to be enrolled in the program for the coming school year to be enrolled in a similar course that will uphold “the tenets” of the project.

One mother who attended the protest – who asked that her name not be used for privacy reasons – said the program had helped her youngest daughter find the confidence to speak up in school.

“I’m here today because I hope that they continue the program, so it can help other children as it’s helped her,” she said in Spanish. The history component of the class – which touches upon Black and Chicano studies – was also compelling for her daughter, she said.

“We need to include a class that can teach students about their roots,” the mother added.

“I feel better about myself,” he added. “It’s a program for kids to learn about their background, heritage, and why they should be proud of that. And I feel like that’s a good thing.”

Mucetti said she was looking forward to engaging with students and talking to them to better understand how to replicate what Legacy Youth Project had given them while creating a course that would better suit the district’s budget and requirements.

“Putting dollars behind at risk-youth, our students who are most in need, is a non-negotiable for me,” she said.

O’Connor, biking alongside her students as they walked the half-mile or so to the district offices, said she hoped that making the program more sustainable would also allow for more students to benefit from it. And she voiced her pride over the way her students had chosen to voice their opinions and demonstrate their leadership.

“These are the kind of young people I want to raise,” O’Connor added.

The latest attendance figures support predictions for a continued drop in the years ahead.

As a cost-saving move, the NVUSD will close Mt. George and Yountville elementaries after this school year.

Rising junior Karen Gallegos began the petition in the hopes of expanding the school's petition to include more about Black history, she said.

NVUSD officials say a former trustee may have violated the state ethics code when he received money to run a Latino support program.

A state agency ruled Carlos Hagedorn broke state law by voting for school district funding to the Legacy Youth Project that he co-founded, but did not impose a fine.

Ethnic studies and a Legacy cancelled in the Napa Valley

Responding on the Legacy Youth Project

Letters: We appreciate your advice, but it doesn't match the realities in the classroom.

Letters: My sense is that each would benefit from a bit of humility.

The facts behind the dismantling of the Legacy Youth Project

Kevin X speaks to the crowd at Vintage High School before marching to NVUSD offices on Jefferson Street.

Kevin X planned Thursday's protest to save the Legacy Youth Project, which was recently cut by the Napa Valley Unified School District.