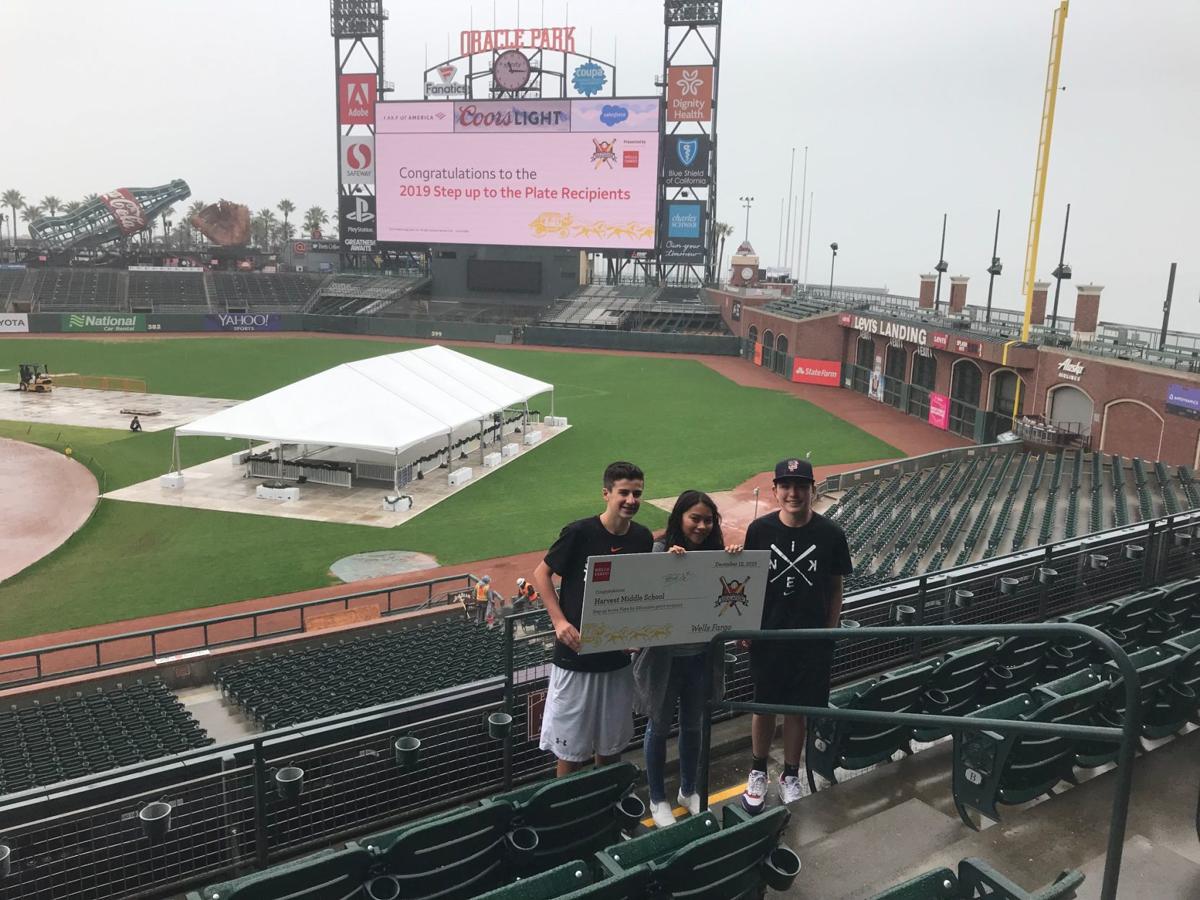 Noah Piersig, Alejandra Valladares and Jeffery Page of Harvest Middle School pose with a ceremonial check at Oracle Park in San Francisco. On Thursday, the school received a KNBR Step Up to the Plate for Education grant, funded by Wells Fargo. 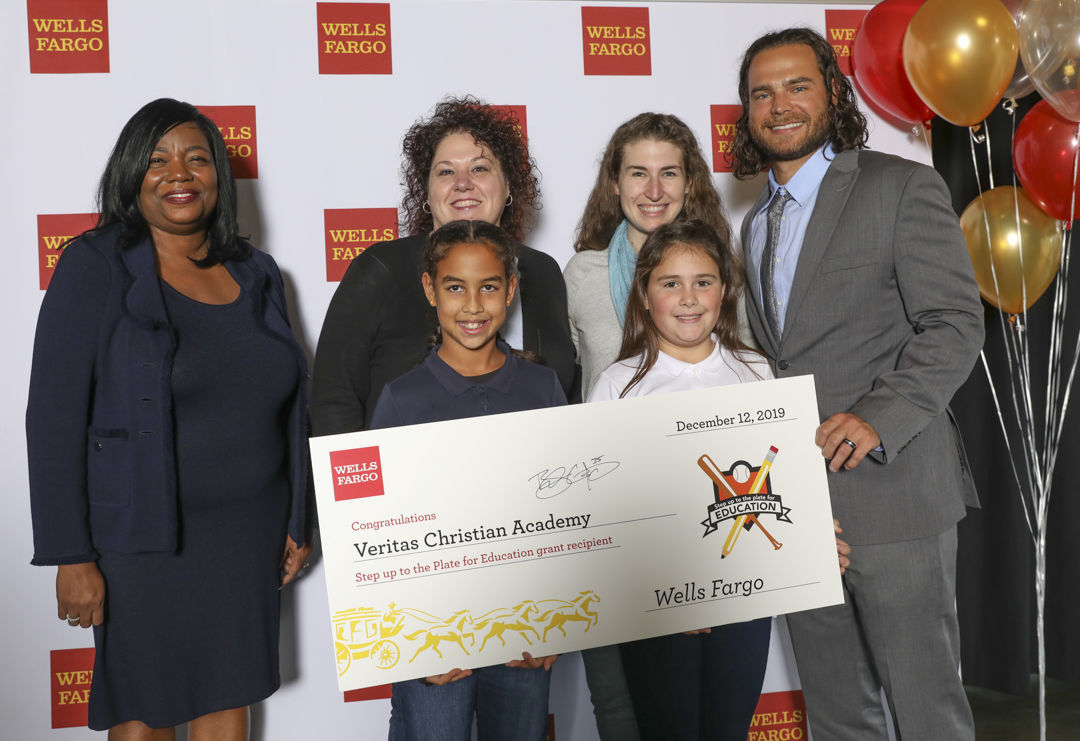 Staff and students from Veritas Christian Academy received a KNBR Step Up to the Plate for Education grant funded by Wells Fargo. Pictured here (left to right) Ina Stewart-Murray of Wells Fargo, Dawnelle Ellis and Katie Perez of Veritas and Brandon Crawford of the San Francisco Giants. Veritas fifth graders Fayven Tesfaw and Mia Mosley are holding the ceremonial check. 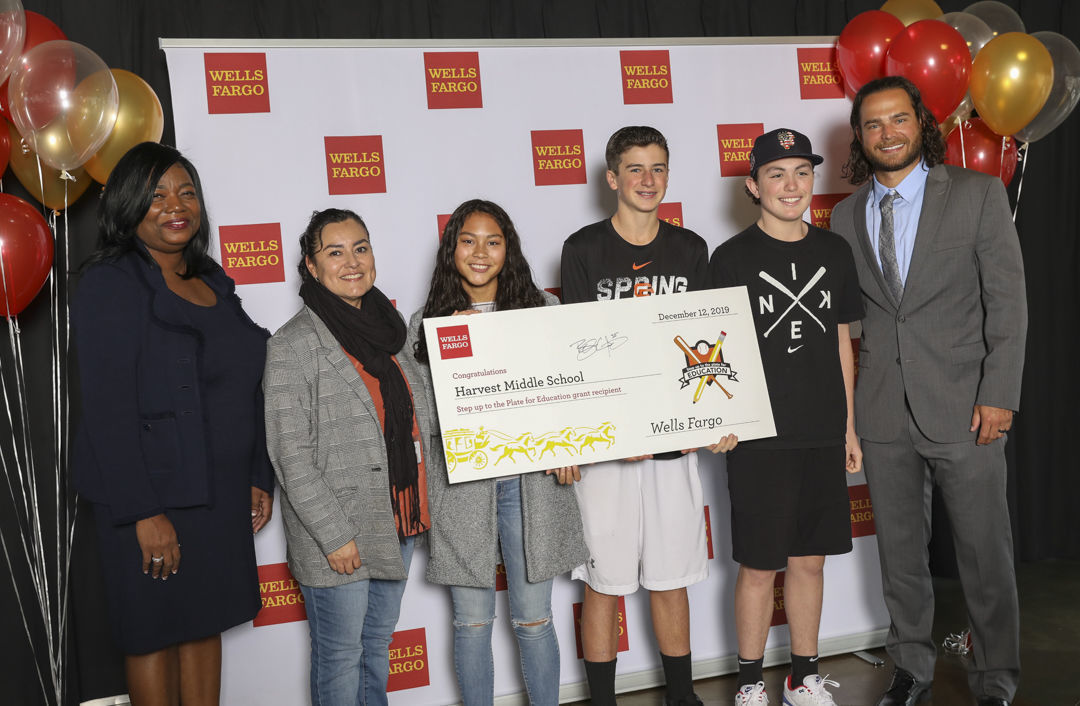 A small group of local kids got to meet popular San Francisco Giants shortstop Brandon Crawford in person on Thursday – and if that wasn’t awesome enough, their respective schools also received educational grants at the same time.

Thanks to the KNBR Step Up to the Plate for Education grants, funded by Wells Fargo, students from Harvest Middle School and Veritas Christian Academy in Napa each received a donation check; Harvest received $3,000 and Veritas $5,000.

Through an open community nomination process, schools applied to receive $100,000 in grants, which were awarded to 32 Bay Area schools to support athletics, arts, STEM and community-based programs, a Wells Fargo news release stated.

After traveling to Oracle Park in San Francisco, the kids were treated to a brunch and then invited to pose for photos with Crawford while holding a giant faux check, the kind you don’t actually take to the bank.

Noah Piersig, an eighth grader at Harvest Middle School, said he saw information online about the grants and decided to apply for his school.

“I knew our school had gone through some money issues, so I applied for this and we received the money,” he said. The funds will be used to establish a scholarship program for sports for students who do not have the money to participate and for new sports equipment, a news release from Wells Fargo stated.

Hearing the news his school had been selected to receive a grant, “I was happy for Harvest and happy for the kids that are going to be helped” by the grant, said Piersig.

Piersig and two other Harvest Middle School students, Alejandra Valladares and Jeffery Page, traveled to Oracle Park on Thursday to accept their check. Principal Martha Franco accompanied them, which meant no one got in trouble for skipping school.

“It was cool meeting him,” Piersig said of Crawford. “He was super nice.”

Piersig said he’s been to Oracle for games before but not for an event like this.

“It was cool to receive the check for Harvest but just being there at Oracle is super cool.”

Katie Perez, administrative assistant to the superintendent at Veritas, applied for a grant for the school without telling her boss, Dawnelle Ellis.

“I didn’t want her to be disappointed if we didn’t get it,” Perez explained.

“Working at a private Christian school where tuition does not cover the cost of education we are constantly looking for alternative means of funding,” she said.

So when the school got the call notifying them that they’d receive a grant, “I just started dancing up and down in the office,” said Perez. “I was ecstatic. Five thousand dollars can really do so much in a school like ours. It’s such a blessing to receive a gift like that.”

Perez and Ellis said the funds would be used to buy iPads for fifth graders at Veritas.

The event on Thursday was a lot of fun, said Perez.

“It was cool to get to meet him,” she said of Crawford. The two Veritas students who attended, fifth graders Fayven Tesfaw and Mia Mosley, “were in heaven,” she said. “They are both also Giants fans. It was fun for them to get to experience that.”

Wells Fargo funds a variety of educational grants to provide resources so students can succeed academically and build brighter futures. Wells Fargo and KNBR have granted over $1.3 million through the Step Up to the Plate program to support the Bay Area’s youth over the past 18 years, a press release stated.

“As a kid, my parents always emphasized the importance of an education—above and beyond participating in sports,” said Crawford. “As a Bay Area native, it is an honor to be part of a program that increases education and athletic programs for local kids.”

You can reach Jennifer Huffman at 256-2218 or jhuffman@napanews.com.

City may assist Napa schools in paying for upkeep of sports facilities.

Dozens of volunteers pitched in to help update and rebuild Napa's Playground Fantástico on Saturday.

How do we stop landslides? Do girls have better memories than boys? What can sugary drinks do to human teeth?

Noah Piersig, Alejandra Valladares and Jeffery Page of Harvest Middle School pose with a ceremonial check at Oracle Park in San Francisco. On Thursday, the school received a KNBR Step Up to the Plate for Education grant, funded by Wells Fargo.

Staff and students from Veritas Christian Academy received a KNBR Step Up to the Plate for Education grant funded by Wells Fargo. Pictured here (left to right) Ina Stewart-Murray of Wells Fargo, Dawnelle Ellis and Katie Perez of Veritas and Brandon Crawford of the San Francisco Giants. Veritas fifth graders Fayven Tesfaw and Mia Mosley are holding the ceremonial check.