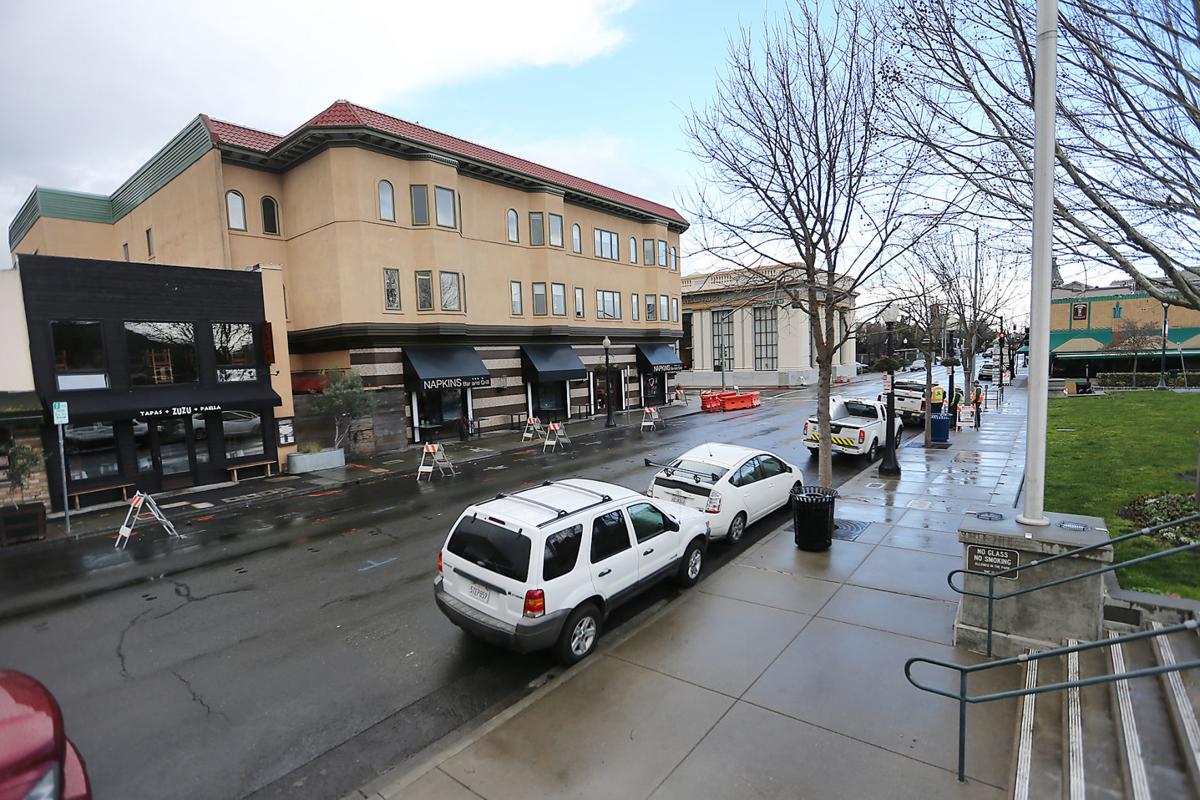 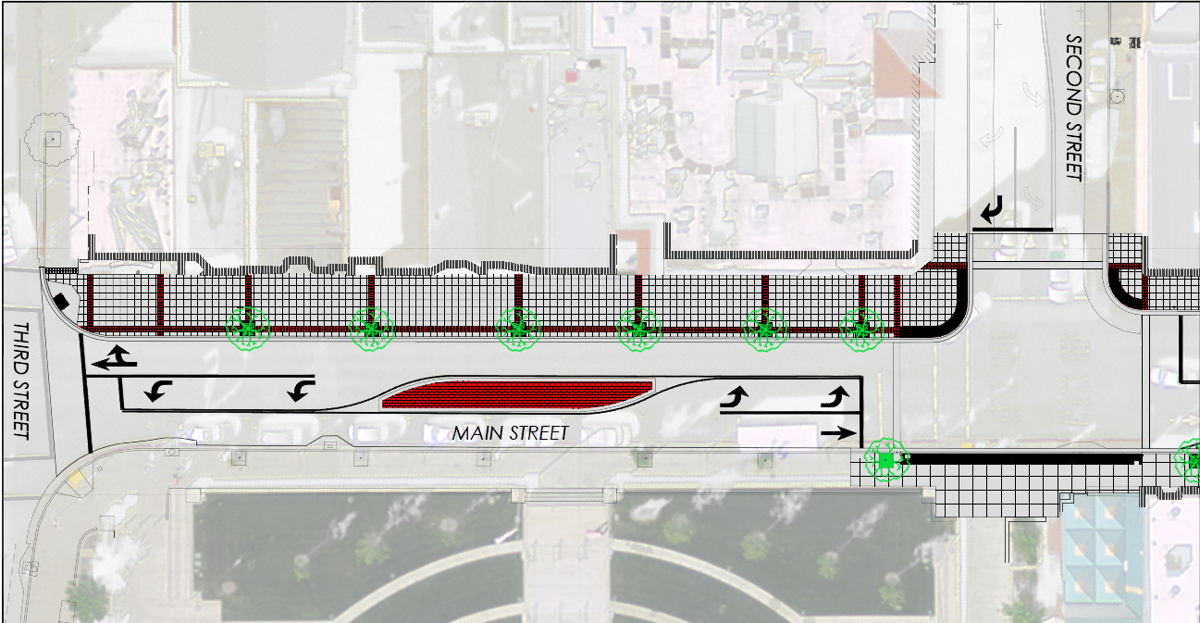 The city’s Main Street block between Second and Third streets is about to get a whole new look –- one that adds more room for sidewalk dining, a new median and the city’s first “pedestrian scramble” intersection.

At the same time, street parking will be eliminated from the block – a loss of 17 parking spaces.

Making room for more outdoor dining will make the block more vibrant, he said. “It will create a place where people want to be.”

“It will be a nice draw and addition to the transformation of downtown,” said Catherine Heywood, vice president of community & industry relations at Visit Napa Valley.

The sidewalk next to the restaurants on Main Street will be widened an additional eight feet. When the project is complete, each business will have the opportunity to install outdoor dining partitions.

The walkway next to Veterans Park had been previously widened and will remain as is, said Napa city senior civil engineer John Ferons.

Mick Salyer, owner of two restaurants on that block: La Taberna and ZuZu Tapas, described the change a double-edged sword.

“We’re losing parking but were gaining this pedestrian-friendly corridor,” he said.

His two restaurants don’t offer outdoor dining now, he said, but he would definitely consider it after the widening is complete.

“I have to play that by ear,” he said. The block can get breezy and cool at times, he said. “We’ll see.”

Pedestrian improvements also include “traffic calming” measures at the intersection of Second and Main streets.

The city will create a raised intersection which will elevate the entire intersection to the level of the sidewalk, enabling pedestrians to cross the road at the same level as the sidewalk.

A similar effect was created at Bel Aire Plaza between Whole Foods and the buildings home to Heritage Eats and Pier 1 Imports.

Then there’s the “pedestrian scramble.”

Pedestrian scrambles are different from the usual cycle of traffic signal phases. During the scramble phase all vehicle signals turn red and all “walk” signals turn on, even in diagonal “jaywalking” directions.

The pedestrian scramble phase will allow pedestrians to cross the intersection of Main and Second streets while all vehicles are completely stopped, said the project description.

“It’s innovative,” said Ferons. “If it works, we could conceivably put it at First and Main,” another busy pedestrian intersection.

To help improve traffic flow, two left hand turning lanes will be installed on Main Street between Second and Third. One will allow left turns from Main to Third and the other from Main to Second.

As it is today, the lack of left-hand turning lanes means that the block gets easily congested, said Smith.

The new left-hand turning lanes “will make that intersection much more fluid (and) have better traffic flow,” said Smith.

An area in the center of the roadway will be reserved for trucks making deliveries to Main Street restaurants and businesses. Similar medians have been created on the Sonoma Square area in Sonoma, said Ferons.

In addition, Main Street will be leveled out to create a flatter surface. Over the years, as the road has been repaved, it has built up a hump in the middle. “Were going to take those old layers out and recreate a new road surface,” said Ferons.

The project is estimated to cost $1.73 million. Construction started in early January and is expected to wrap up by the middle of May, less than two weeks before the seventh annual BottleRock music festival opens at the nearby Napa Valley Expo on May 24.

Starting Tuesday, the Main Street block will be closed for about three weeks total so that the bulk of the work can be done as efficiently as possible, said Ferons.

All Main Street businesses remain open during the construction, he added.

“We’ve heard loud and clear from businesses that there’s no ‘good’ season for construction, but if you have to build, then please do it from January to May – before BottleRock hits,” said Ferons, referring to the tens of thousands converging on Napa for the annual three-day festival.

According to Ferons, the city did a parking survey that concluded that city parking garages within the vicinity of the project are generally under parked and only use about 60 percent of their capacity.

To help drivers, “A city parking manager is working on a wayfinding program that will direct people to those underutilized parking garages,” he said.

After comparing two planned makeovers in Napa’s core, the city has chosen to refresh sidewalks first and save rebuilding a downtown square for later.

With the old blue and maroon tile stripped off the front and a new entrance under construction, the former Fagiani’s bar in downtown Napa is e…

For 9,125 days — and counting — Downtown Joes has been feeding and entertaining countless numbers of locals and visitors.

Napa to bring public restrooms downtown, but where?

Having approved automated public toilets to serve hard-pressed visitors to downtown, Napa leaders will decide how to place one of them as disc…

For decades, the building that once housed Fagiani’s bar has presented two old and contrasting faces to passers-by in downtown Napa.

The downtown riverfront property formerly home to the short-lived BurgerFi restaurant has been listed for sale by owner Steve Hasty and partners.

Joe Wagner, member of a longtime Napa wine family and owner of Copper Cane Wines and Provisions, has purchased the historic Fagiani’s building…

The makeover of Main Street between Second and Third streets roared into high gear this week, with workers ripping out the old sidewalk in fro…

Weathered wood along with metal shaped in a vine row-style motif would mark a fresh package of directional markers in downtown Napa – possibly including a pedestal-mounted panel at the traffic roundabouts being built near Highway 29 – that would replace timeworn signage in use since 2001.