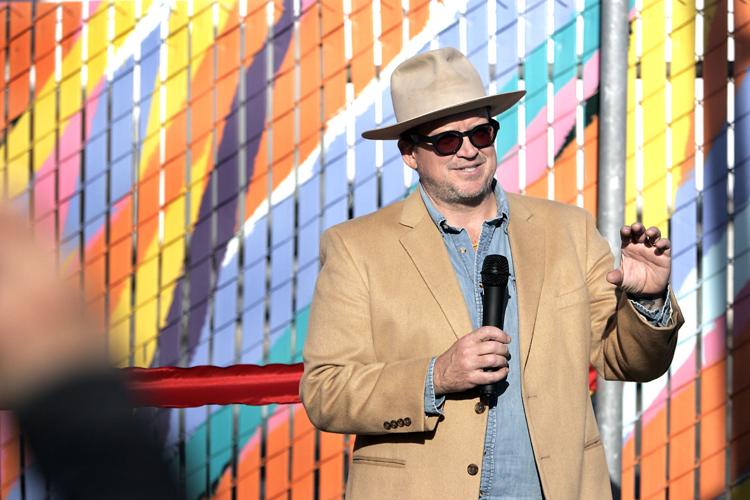 Local artist Mikey Kelly speaks about his mural, “Begin and Continue” at the official ribbon-cutting ceremony on Tuesday afternoon. The 700-foot long mural features 28 figures along the Napa Valley Vine Trail in the Rail Arts District. 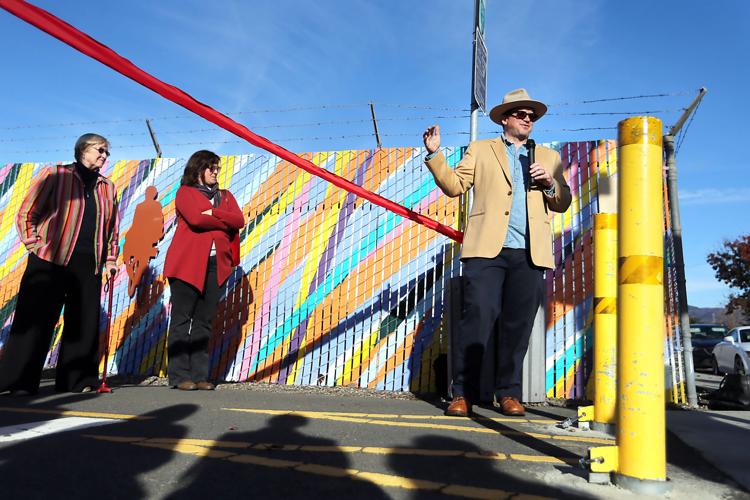 "Begin and Continue" by local artist Mikey Kelly, right, was officially unveiled on Tuesday afternoon at a ribbon cutting. The 700-foot-long mural features 28 figures along the Napa Valley Vine Trail in the Rail Arts District. 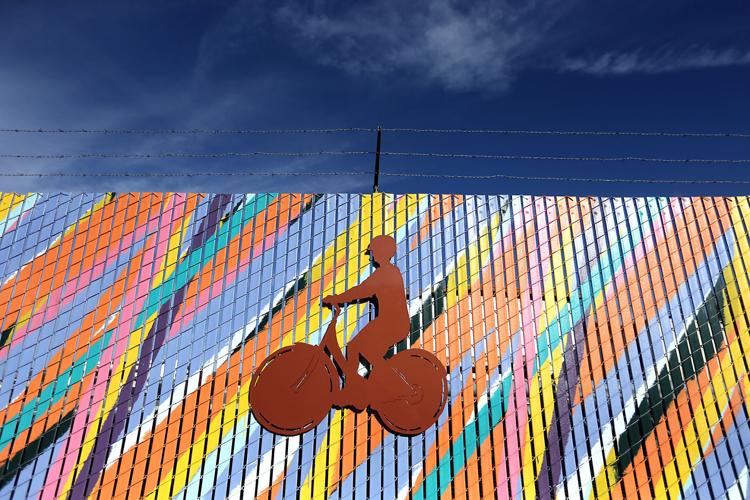 "Begin and Continue" by local artist Mikey Kelly was officially unveiled on Tuesday afternoon at a ribbon cutting on the Napa Valley Vine Trail. It features images of people who use the Trail.

With the snip of oversize scissors through a red ribbon across the Napa Valley Vine Trail, visitors were introduced to the newest art installation adorning the county’s prime walking path – a blend of brightly colored lines and metal silhouettes that pays homage to the very people jogging and cycling past it.

Having taken shape since June on 710 feet of fencing behind the Napa city corporation yard, “Begin and Continue” received its dedication Tuesday afternoon as the latest large-scale artwork on the pathway planned to stretch from Calistoga to Vallejo.

What had been a block-long band of plain plastic fence slats had become, under the hands of the Napa artist Mikey Kelly, a wave of diagonal, crisscrossing lines in blue and purple and yellow and green, supporting the aluminum shadow figures of runners, strollers and other trail users.

“These are the special things that pull a community together,” she told about two dozen guests during a brief ceremony at the trail’s Jackson Street crossing before cutting the ribbon just after 2 p.m. “It’s great fun to be on the trail or the Wine Train, and see the trail being transformed by this art.”

“This is especially close to my heart,” said Kristina Young, an artist, friend of Kelly and member of the city Public Art Steering Committee that approved the $40,000 Vine Trail installation in June. The placement of “Begin and Continue” in a neighborhood well away from highly traveled, tourist-friendly routes, she added, can help “to generate interest in a section that’s been neglected for a long time.”

“We knew he understands the area better than anyone else, because he works right here, he walks here, and he knew the people he based his silhouettes on,” said Young, pointing to Kelly’s studio across Jackson Street.

Kelly’s creation blends the visual with the abstract, setting its metal silhouettes against a backdrop of colored, sloped lines made from seven colors of fade-resistant paint. The lines’ angles were set by converting five words – “active,” “caring,” “fuerte,” “amor” and “home” – through a coding system known as Lovell’s Cipher to match the letters to numbers from one to 27.

The keywords were the most popular answers given to Kelly’s teenage students at Nimbus Arts in St. Helena to the fill-in-the-blank question “Napa is …”

“I wanted to somehow bring language into the design of abstract painting,” the artist said in June about the cipher, first used for encryption by colonial forces during the American Revolution.

Models for the metal figures were people who encountered Kelly at work on the fence art during the summer – people immortalized through smartphone photos that were digitally converted to digital files, which guided the cutting of aluminum sheets that were powder-coated and painted a woody brown.

Even before Tuesday’s ribbon cutting, the artist said, he already felt the appreciation of Vine Trail regulars.

“People were coming out to take photos of it, even before I was done,” said Kelly of the six-week painting period and the creation of the silhouettes. “They would be see it change every time they went by. Train engineers would wave at me every day.”

Other artworks to have appeared nearby include the moonlight-themed “Knocking on Heaven’s Door” mural at the back of the Napa Valley Register office, as well as the surreal “Floating Houses” mural next door on the NAPA Auto Parts store and the geometric “Chromodynamica” mural behind Matthews Mattress just south.

The paintings are expected to form the seed of the Rail Arts District, a 1.7-mile-long Vine Trail segment where property owners will be encouraged to install or sponsor public art pieces as a draw for runners, cyclists and tourists.

Howard Yune became the Register's city editor in September 2022. He has been a staff reporter and photographer since 2011, and previously wrote for the Marysville Appeal-Democrat, Anaheim Bulletin and Coos Bay (Oregon) World.

Newest Vine Trail art to be dedicated this month

The city of Napa plans to hold a ribbon-cutting at the site of the Napa Valley Vine Trail’s newest piece of public art on Tuesday, Nov. 28, at 2 p.m.

Very few city corporation yards attract admiring glances from the public. Napa’s will be an exception.

Murals and artworks have begun appearing on Napa’s section of a valley-wide walking trail, but an upcoming piece will be the first to pay trib…

A plain and stark fence may become a colorful canvas along the Napa Valley Vine Trail – a tableau honoring the men, women, children and pets w…

Graffiti painters are still making their presence known along the Napa Valley Vine Trail’s urban sections in central Napa. But local artists a…

Eight new artworks will debut on downtown Napa streets this summer as part of the new Art Walk.

Art where it matters: Two of Kristina Young’s projects to beautify Napa

Napa artist Kristina Young is using our natural environment and familiar landmarks to bring art to the community.

AIDS in Kenya: Homabay County, where fish are traded for sex

Local artist Mikey Kelly speaks about his mural, “Begin and Continue” at the official ribbon-cutting ceremony on Tuesday afternoon. The 700-foot long mural features 28 figures along the Napa Valley Vine Trail in the Rail Arts District.

"Begin and Continue" by local artist Mikey Kelly, right, was officially unveiled on Tuesday afternoon at a ribbon cutting. The 700-foot-long mural features 28 figures along the Napa Valley Vine Trail in the Rail Arts District.

"Begin and Continue" by local artist Mikey Kelly was officially unveiled on Tuesday afternoon at a ribbon cutting on the Napa Valley Vine Trail. It features images of people who use the Trail.