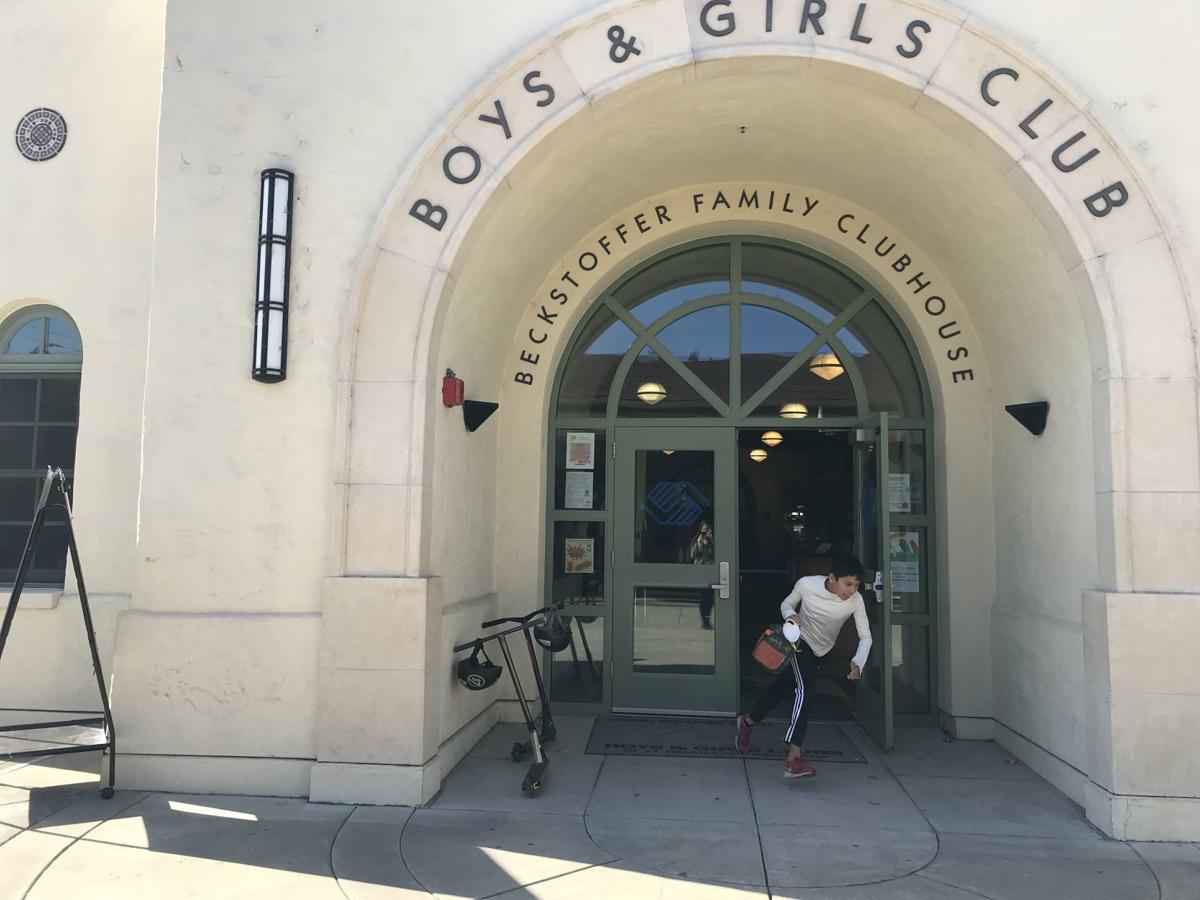 One of the 90 kids at St. Helena's Boys and Girls Club on Tuesday runs outside the club holding a lunchbox and a face mask for smoke. The club's hours were extended Tuesday in the wake of school cancellations. 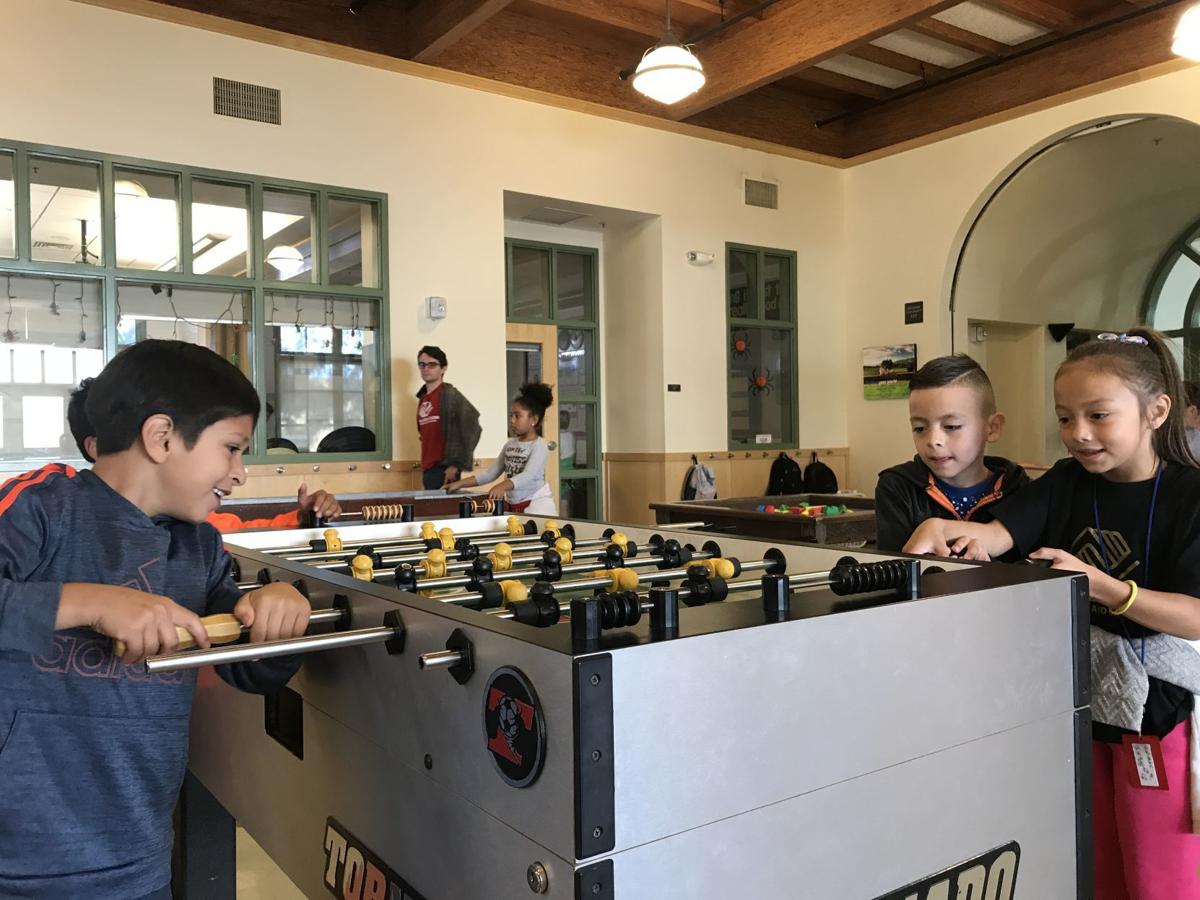 Free play at the St. Helena Boys and Girls Club on Tuesday. St. Helena schools were cancelled for the day, and Calistoga's schools will be closed through the week. 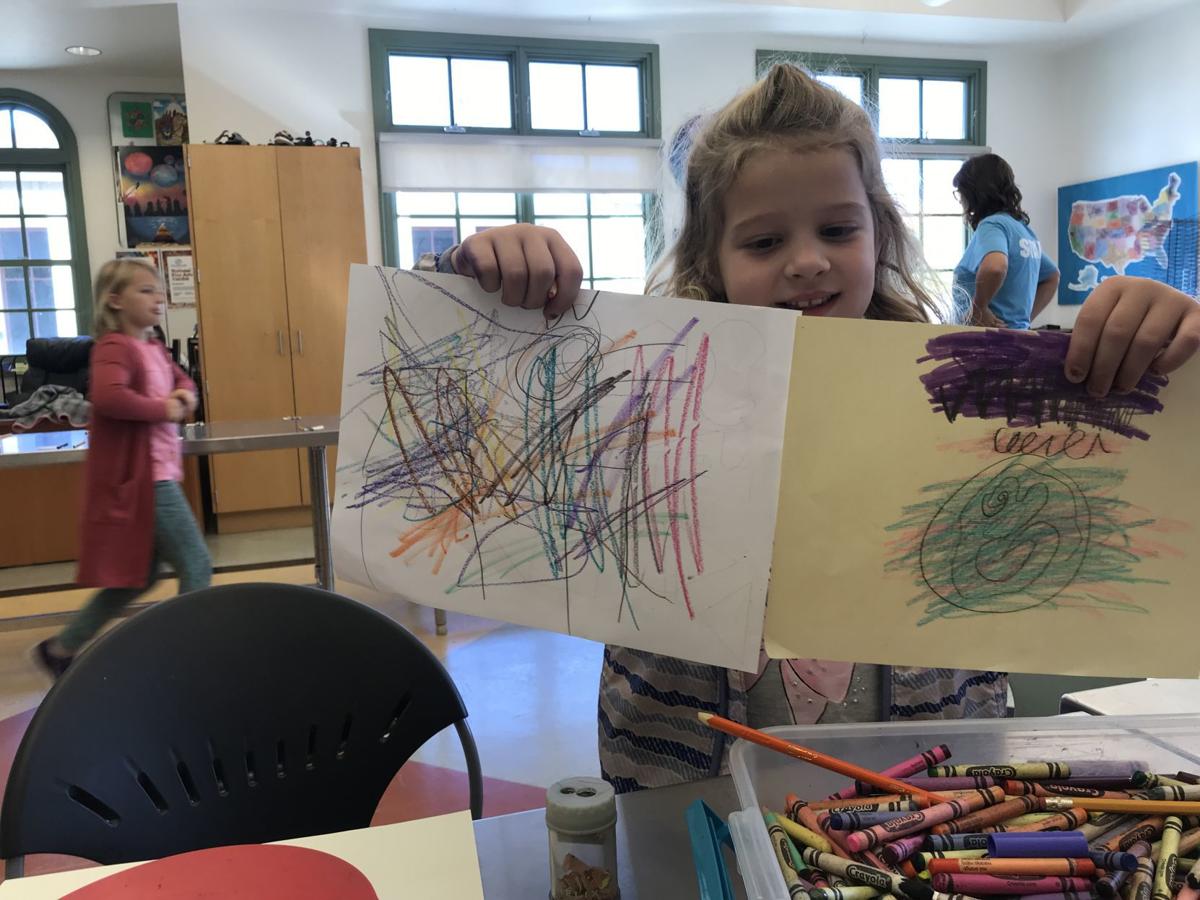 Iris Erickson, 6, of Angwin, holds up the day's artwork at the Boys and Girls Club in St. Helena.

School cancellations will last through the week in Calistoga, which was issued a voluntary evacuation order on Sunday. Air quality fluctuated through the day Tuesday, as residents worried about the elevated risk posed by the strong wind predicted for Tuesday night.

The St. Helena branch of the Boys and Girls Club drew children from Calistoga and Angwin after club branches in those communities closed due to the weather and power situations.

“We brought (the purifiers) here so we could open up for a full day for all the kids in the valley – or kids anywhere, really,” Haley said, noting the club normally opens after the school day has ended.

The club will continue extended hours through the end of the week.

About 90 school-aged children were at the club at mid-day on Tuesday, less than its regular after-school attendance of 250, with most from Calistoga, Haley said. He suspected that many of regular attendees, St. Helena residents, may have left town once smoke from the Kincade Fire drifted into town.

“Not everyone has the means to evacuate, so we have a ton of Calistoga kids,” Haley said. “We know of a handful of families who truly just don’t have anywhere else to go. They’re just kind of holding down the fort, and if in the meantime they can drop off their kids and let them be distracted, that’s great.”

On Tuesday, children at the Boys and Girls Club were coloring, cooking, doing science experiments or playing games in the gym. It was business as usual, Haley said, though they’d allowed the kids to be more independent and slightly more relaxed in their activities.

Besides hosting the kids, Haley added, the club is providing them with meals. He’d discussed the district’s school cancellations with St. Helena’s superintendent and its principal, both of whom had voiced concern for students who rely on the district’s food service for meals.

“We did pancakes and eggs for the kids that came this morning, and we’ll do (lunch and dinner),” Haley said. He’d been bringing plates of food to the occasional parent, too.

Blackouts dotted Napa County, but were felt especially hard in American Canyon, where power for many residents was shut off on fairly short notice, according to Shirley King, Food Bank Program director for Community Action of Napa Valley.

“We’re looking at how to get meals into there,” King said. “(It’s challenging) if you’re without power for several days, if you have no way to prepare food, and you can’t store refrigerated products like milk.”

King said American Canyon had identified families with small children as an especially vulnerable population. CANV was also continuing its Meals on Wheels service to seniors in the area, and were to bring meals Tuesday for “people all across the spectrum,” she added.

“There’s an immediate need, and there’s also low income folks – people that will need to resupply that can’t just go out and buy more food,” King said. “And if they’ve been without work for a few days, that’s a whole other issue.”

Upvalley Family Centers, which also closed its Calistoga location on Tuesday, was addressing similar concerns by handing out gift cards with which families could purchase food, according to Executive Director Jenny Ocon.

“We want people to know they can come into any of our offices and get assistance … either because they’re affected now or from prior shutoffs,” Ocon said, adding that the cards were funded through the Napa Valley Community Foundation.

Ocon said the St. Helena branch was “committed to staying open” as long as possible, and that they had also dispatched staff to the shelters at CrossWalk Community Church and at Napa Valley Expo.

“We have case managers who can assist people with getting the resources they need, whether that’s mental or physical health or financial,” she said, noting that they had worked similarly during the 2017 wildfires. “We think of ourselves as second responders to the first responders who are dealing with the immediate fires.”

A team of Napa midwives was ready to help the Windsor couple deliver their baby.

Breathing in Napa's afternoon air was like smoking 2 cigarettes

Napa County's usually clear skies have been hazy with fallen ash from the Kincade Fire in Sonoma County, and air quality has plummeted.

Day by day: Calistoga threatened by the Kincade Fire

The Kincade Fire started in Geyserville on Wednesday night, Oct. 23, and five days later had burned 75,000 acres, caused the evacuation of lar…

Disabled Novato seniors in complex left behind in outage

NOVATO — One woman in her 80s tripped over another resident who had fallen on the landing in a steep stairwell. Others got disoriented, even i…

As Calistoga awaits an official announcement that the advisory evacuation has been lifted, the city announced this morning that the Halloween …

On Friday, Nov. 8, from 3 to 7 p.m., the Napa County Farm Bureau will host a charitable benefit drive to benefit Sonoma County fire victims an…

Containment numbers edged up to 80 percent for the Kincade Fire burning in Sonoma County as of Monday morning, according to Cal Fire.

When the Kincade Fire forced the evacuation of a wedding venue outside Calistoga, a friend in St. Helena stepped in to host the couple on thei…

How to heal from triggers and traumas caused by natural disasters and other causes is the topic of afternoon and evening programs at Lincoln Theater Yountville on Thursday, Nov. 21 by the Center for Mind Body Medicine.

The Boys & Girls Clubs of St. Helena and Calistoga will host a "thank you" holiday dinner for Upvalley First Responders from 5-7 p.m., Wednesday, Nov. 20 at the Calistoga Clubhouse, 1401 N. Oak St. in Calistoga.

Kudos to the UpValley Family Centers on its 20th anniversary

St. Helenans and Calistogans gathered to celebrate the 20th anniversary of the Upvalley Family Centers, which provided critical services to people living in the Upvalley area of Napa County.

Making us stronger together

I was driving into work recently and thought about how lucky I am to live in this beautiful valley. Unfortunately, sometimes it takes a crisis…

One of the 90 kids at St. Helena's Boys and Girls Club on Tuesday runs outside the club holding a lunchbox and a face mask for smoke. The club's hours were extended Tuesday in the wake of school cancellations.

Free play at the St. Helena Boys and Girls Club on Tuesday. St. Helena schools were cancelled for the day, and Calistoga's schools will be closed through the week.

Iris Erickson, 6, of Angwin, holds up the day's artwork at the Boys and Girls Club in St. Helena.