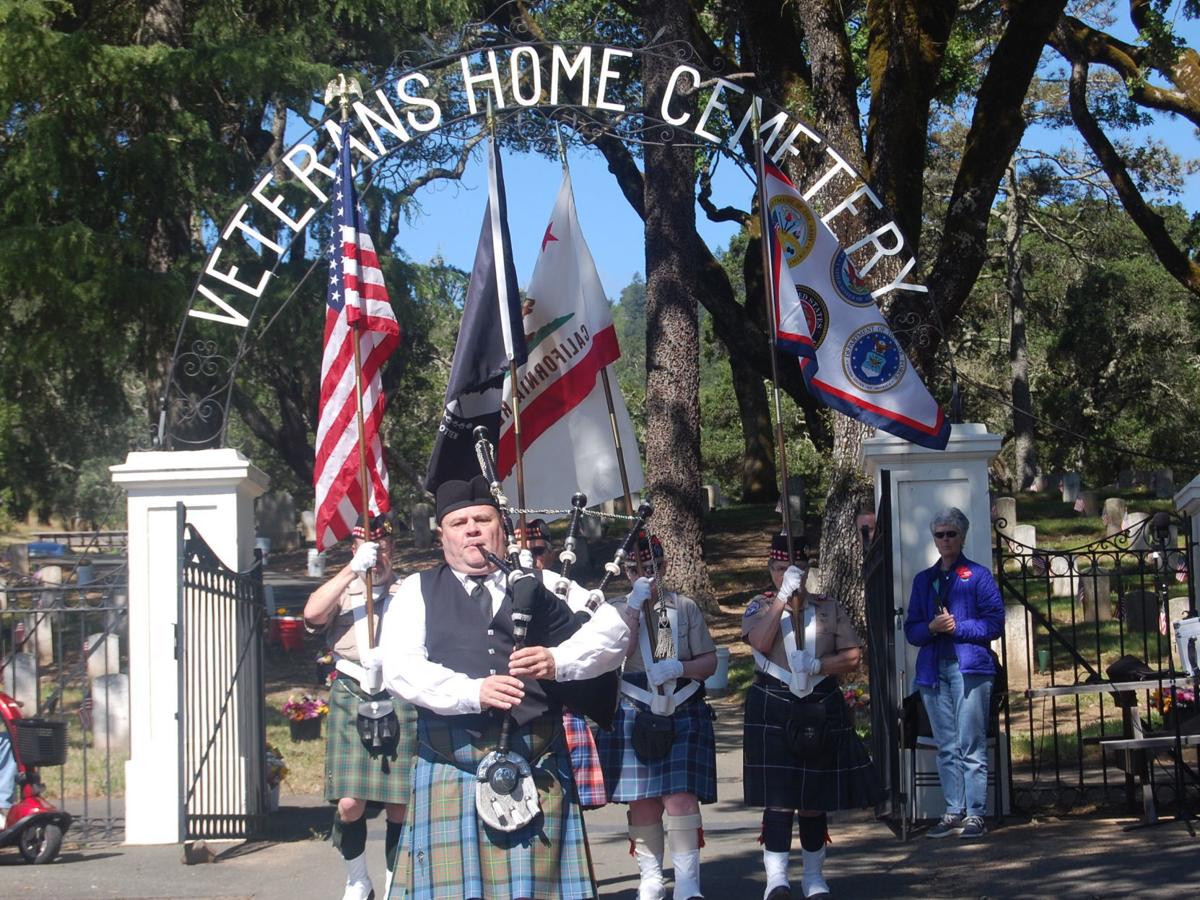 The Scottish-American Military Society presented the colors during the Memorial Ceremony at the California Veterans Home at Yountville cemetery. 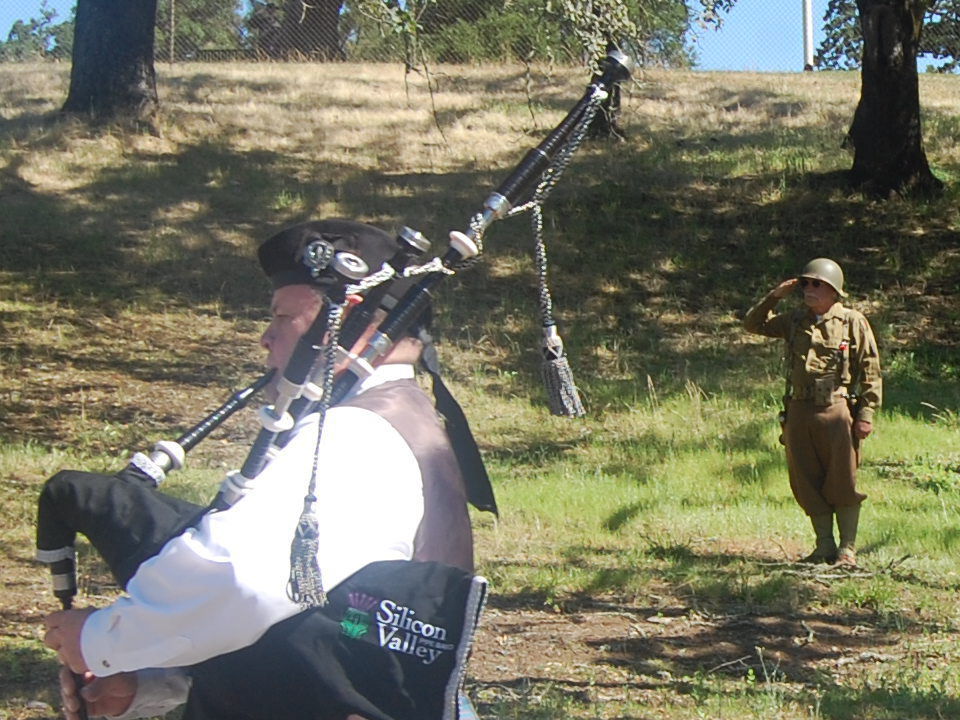 C.J. Bertagna salutes as the Scottish American Military Society presents the colors during the Memorial Day ceremony at the California Veterans Home at Yountville. 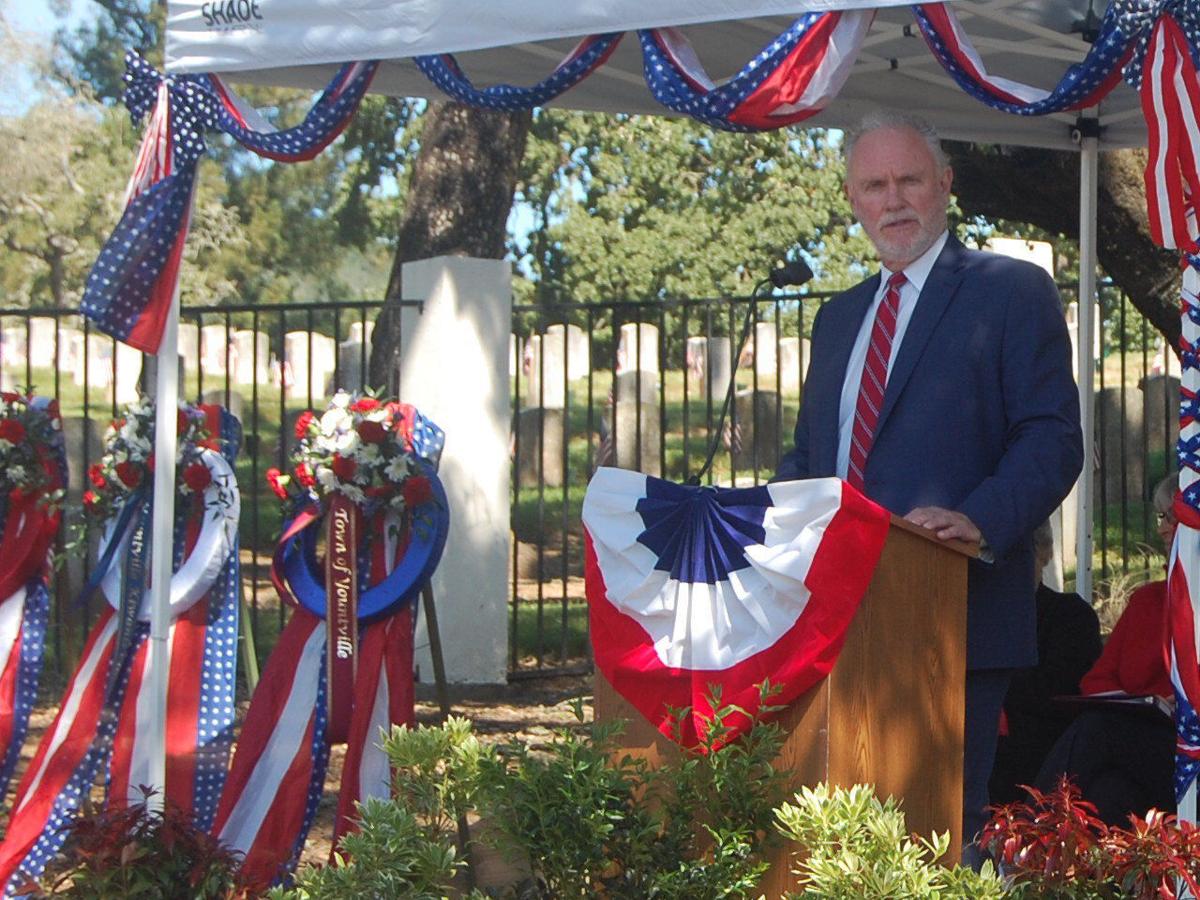 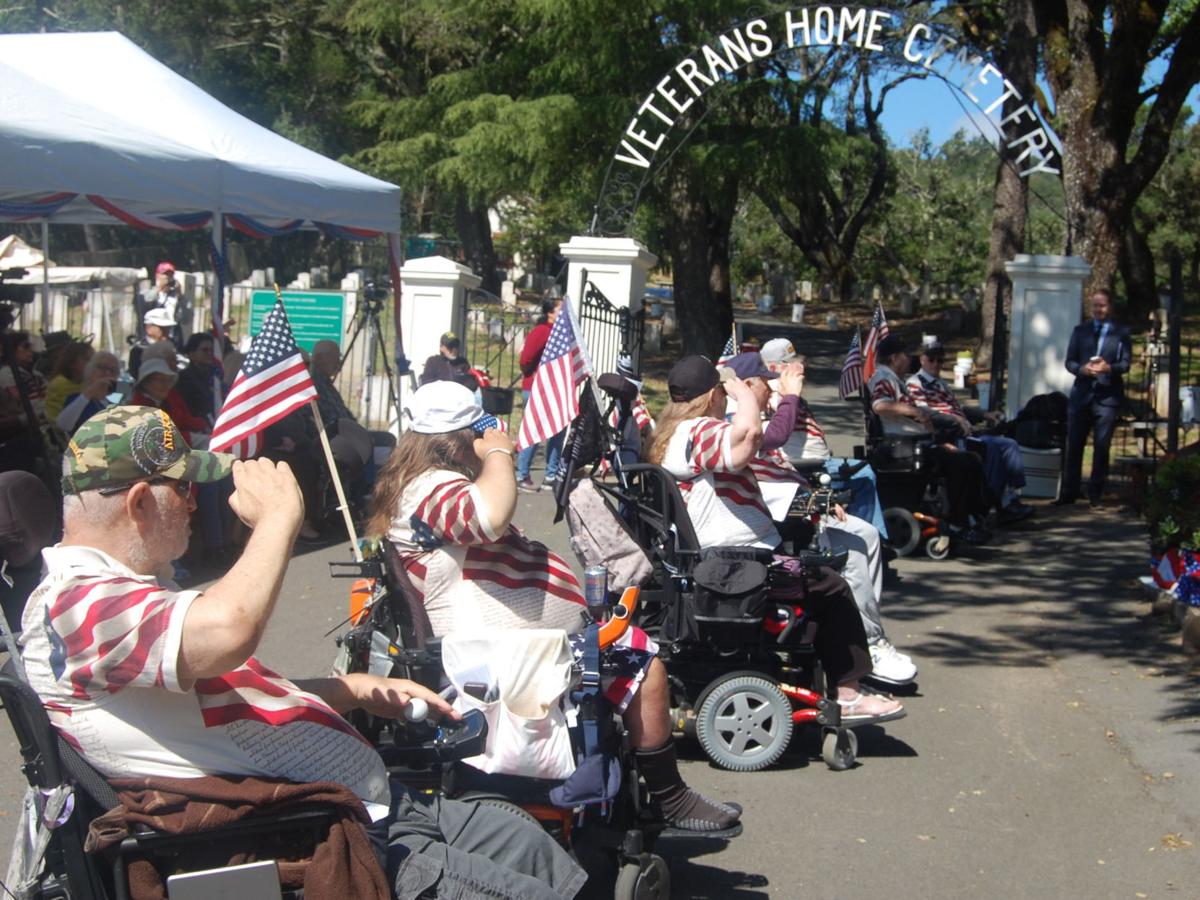 The Hills Angels Wheelchair Team participated in the Memorial Day ceremony at the California Veterans Home at Yountville. 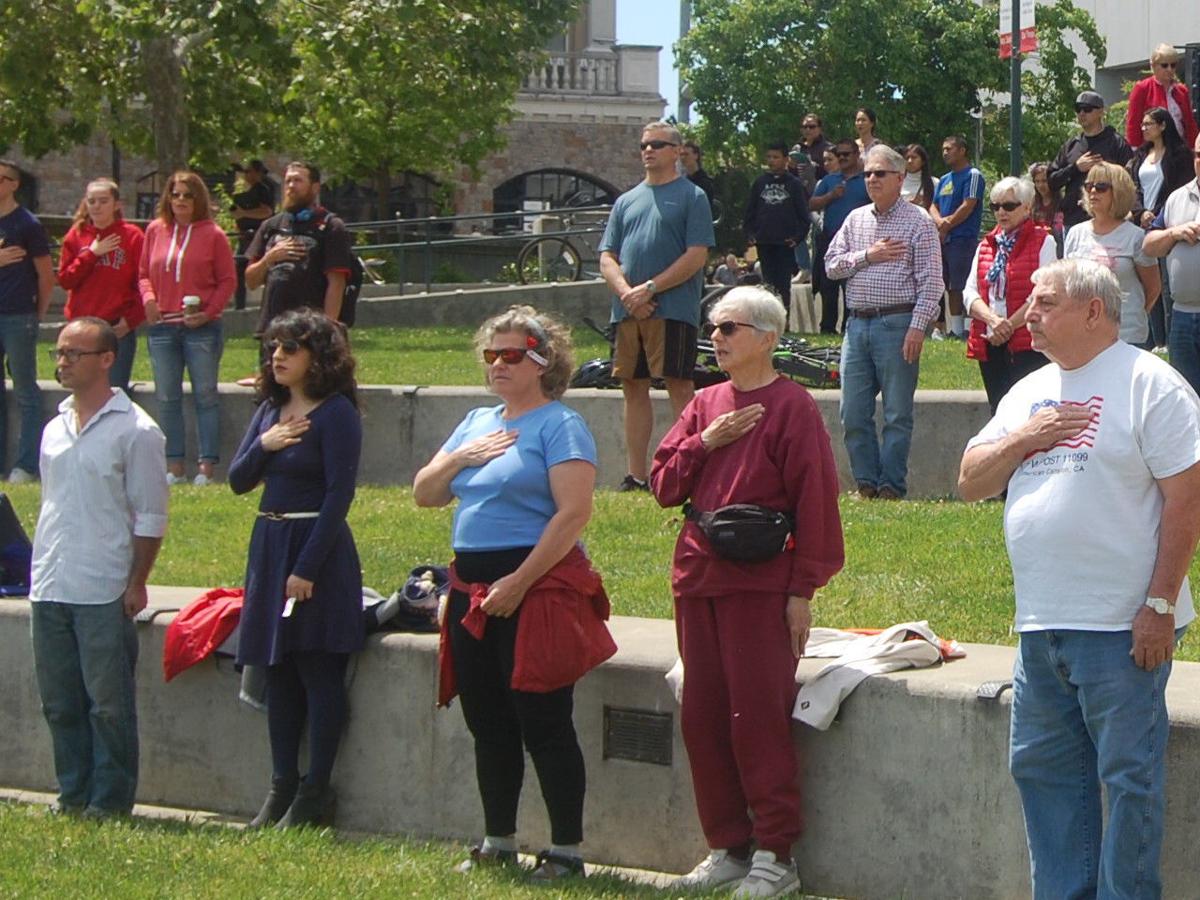 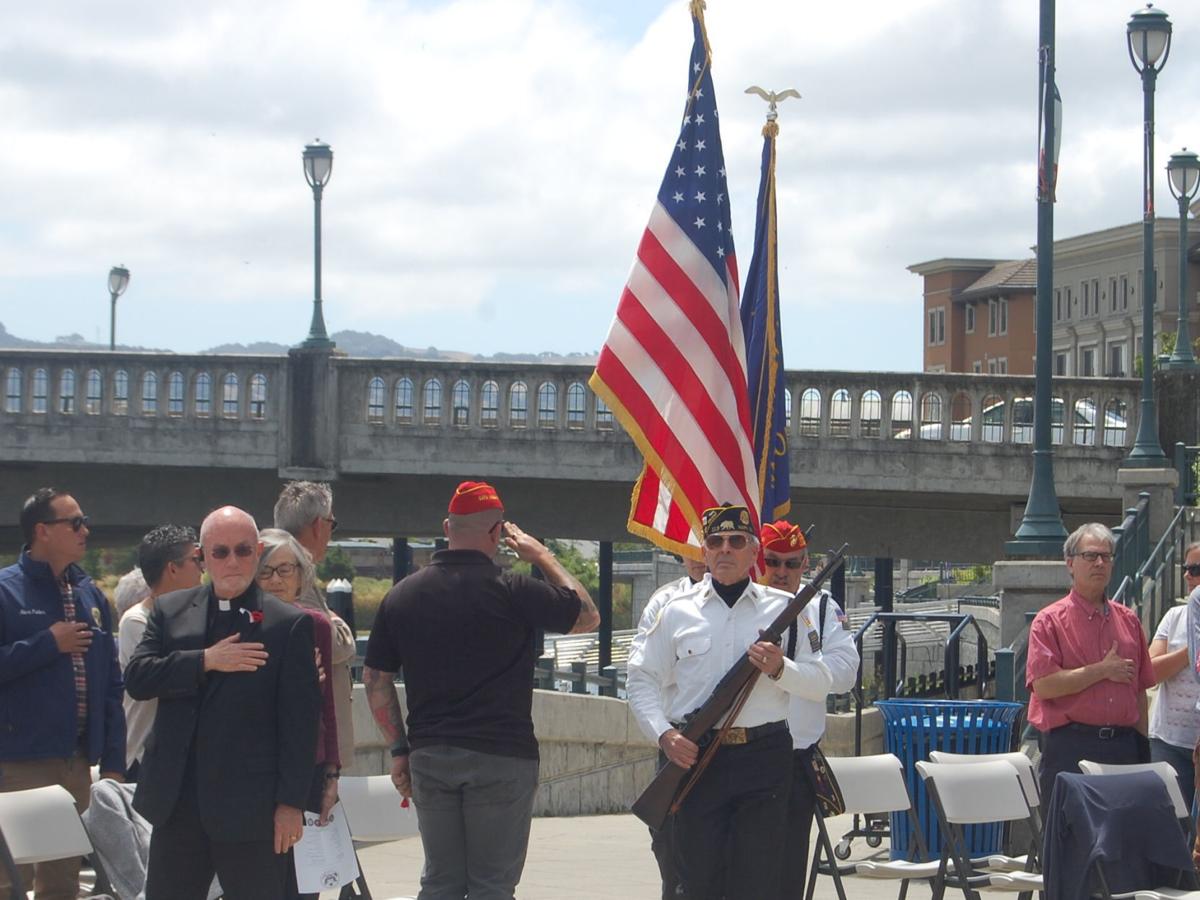 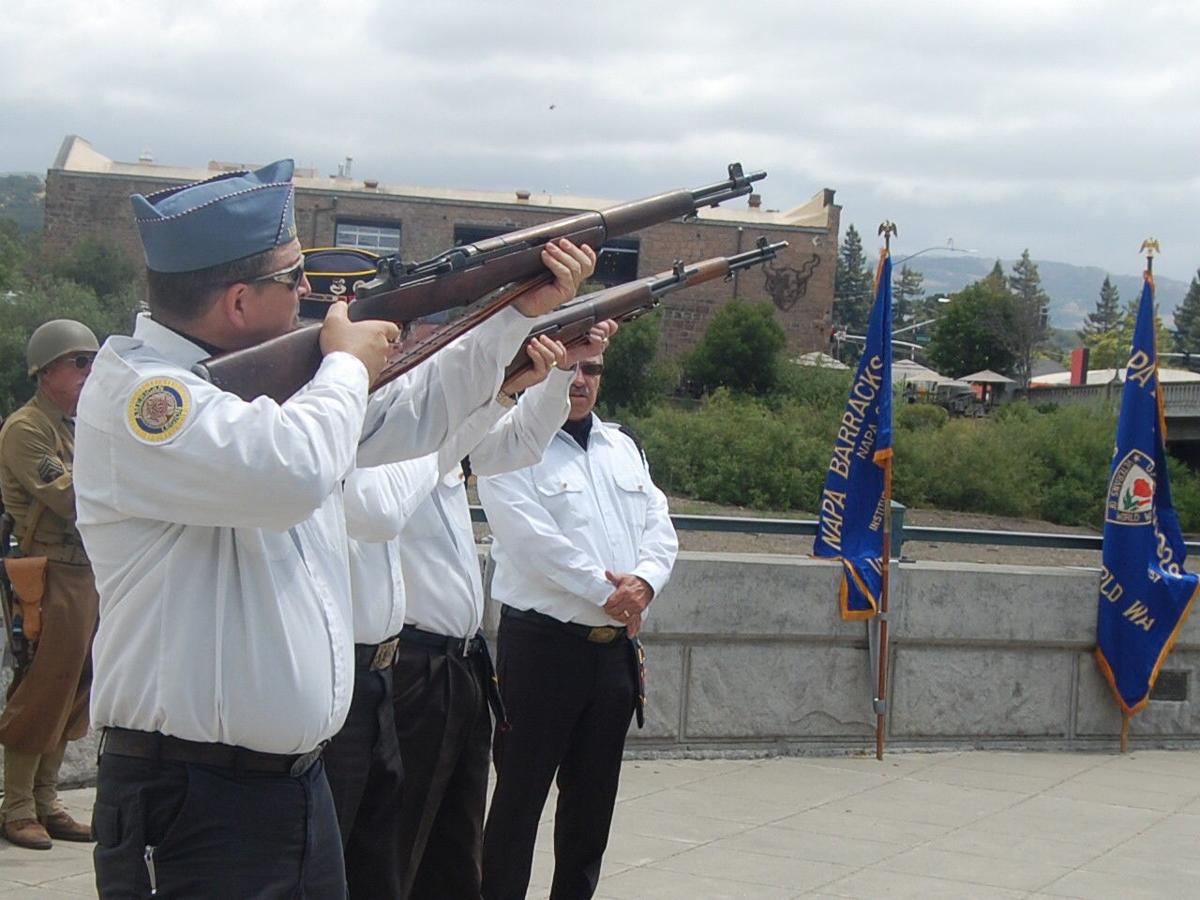 The Scottish-American Military Society presented the colors during the Memorial Ceremony at the California Veterans Home at Yountville cemetery.

C.J. Bertagna salutes as the Scottish American Military Society presents the colors during the Memorial Day ceremony at the California Veterans Home at Yountville.

The Hills Angels Wheelchair Team participated in the Memorial Day ceremony at the California Veterans Home at Yountville.

Mournful bugle renderings of “Taps” could be heard at various Napa County locations on Memorial Day as residents honored those who died while serving in the military.

Ceremonies in all five county cities featured such sights as the laying down of wreaths. Red, white and blue were the dominate colors. The hundreds of people attending made their Memorial Day more than the unofficial start of the summer vacation season.

One annual ceremony is held in the oak-covered hills to the rear of the Veterans Home of California at Yountville. Here is the 11-acre Veterans Home cemetery with about 5,800 headstones, which on Memorial Day, were each decorated with a small flag.

“Thank you for your service, your bravery, your selflessness,” Yountville Vice Mayor Kerri Dorman said during the ceremony after gray morning skies had given way to blue.

“I will never break the promise to always remember our fallen,” the assembly of people said in unison.

At times, speakers zeroed in on the specific. One told of a Vietnam War veteran who began showing symptoms related to Agent Orange exposure and had his physical vitality and ability to enjoy life drain away before dying.

“Because it took him 50 years to die for his country, it’s doubtful his name will be added the wall,” said Debby Wiepking of the Allied Council, referring to the Vietnam Veterans Memorial Wall in Washington, D.C.

Speakers did more than remember the men and women who fought and died for the country. They also called for action, whether helping surviving families or meeting the needs of today’s living veterans.

For Korean War veteran and Veterans Home resident Muriel Zimmer, attending a Memorial Day ceremony is a family tradition. She shared her experiences while waiting for the Yountville event to begin at 10 a.m.

Zimmer grew up in a small New York town, where Memorial Day was marked with a Main Street parade to the cemetery. A young Zimmer marched with the Girl Scouts behind the high school band and put flower on the graves.

“It was a typical American movie-type setting, really,” Zimmer said. “It was a big event for a little, small town.”

Another local ceremony began at 11:30 a.m. in downtown Napa in the grass-and-concrete setting of Veterans Memorial Park along the Napa River. American Legion Post 113 hosted the event.

C. J. Bertagna of American Legion Post 113 focused during the keynote address on the upcoming 75th anniversary of D-Day.

Bertagna read a letter from an optimistic young soldier preparing to go on the “great crusade” of D-Day and asking for a care package from home. The soldier was killed in the ensuing battle and buried in the Normandy American Cemetery and Memorial in France.

As in Yountville, one theme was that remembering the dead should make a difference for the living.

“May we continue to honor them throughout the year and live a life worthy of their sacrifice,” Bernie Narvaez, commandant of the Napa Valley Marine Corps League, told the crowd.

“A real hero is someone who stands for what they believe in, regardless of what others think,” Napa resident Bill Chadwick said, citing paralyzed Vietnam veteran and anti-war activist Ron Kovic as an example.

Chadwick, a retired lieutenant colonel and graduate of West Point, addressed a crowd of several hundred at the St. Helena Cemetery.

Chadwick shared his own memories of military service: packing a rucksack “with the heavy stuff at the bottom,” assembling and disassembling an M-16, and cooking over a can of Sterno or a piece of C-4 plastic explosive.

“The warrior spirit, the smell of coffee breath under a poncho with a red-filtered flashlight making a map check,” he said. “The scent of fear in the C-130 standing up for a night jump with equipment into God only knows what kind of drop zone, and it’s your own body you smell. Oftentimes the only reason you did tough things was because your buddies did them.”

Chadwick said he endured fear, doubt, pain and deprivation because his West Point roommate was enduring the same hardships. That camaraderie sustained him, as it has other veterans.

“Personally, my actions in my war in El Salvador and Nicaragua have had far-ranging effects, good and bad, not only for those two countries but have affected our nation in adverse ways as well,” Chadwick said. “I shudder to think on the bad I caused and try to make up for it every day.”

Veterans and their families laid wreaths in honor of the local soldiers who died in World War I, World War II, Korea, Vietnam and Afghanistan.

Post 199’s rifle squad fired a 21-gun salute, followed by the playing of “Taps.” After the ceremony, the public was invited to lunch at the American Legion Hall.

Chadwick closed with a quote by the late author Herman Wouk that’s inscribed on a bench at Arlington National Cemetery: “The beginning of the end of war lies in remembrance.”

“Please make today your own version of a memory that inspires, fortifies, enriches, and prepares you to go out and do something for all of us,” he said. “Make the effort to share your time, talent and treasure with the less fortunate you see and encounter each and every day.”

Back in 1919, Memorial Day in Calistoga was set aside as a daylong event. There was a parade, speeches, and veterans were escorted with a march to Pioneer Cemetery for services, prayers, the playing of “Taps,” the singing of “The Star Spangled Banner,” then all marched back to town.

This year, as in previous years, veterans were honored at Pioneer Cemetery and also with a ceremony at the Veterans Memorial at Logvy Park.

At Pioneer Cemetery, during Memorial Day on Monday, the names of Civil War Veterans buried there were read by the Sons of Union Veterans of the Civil War (SUVCW), and auxiliary member Cindy Eddy read Lincoln’s Gettysburg Address. A rifle salute was also performed.

In speaking about what Memorial Day was like back in 1919, Dean Enderlin (SUVCW) also pointed out that this year marks the 100th anniversary of the creation of the American Legion.

Later in the morning at Logvy Park, Calistoga American Legion member Jim Barnes spoke of the sacrifices made by soldiers throughout U.S. history. He called attention to conditions suffered such as shell shock, the aftermath of weapons like Agent Orange during the Vietnam War, and post-traumatic stress disorder (PTSD), which wasn’t recognized as an actual condition until 1980.

Gradually, attention was called to change the culture of honoring veterans, and providing healthcare, the GI bill, to pay for school tuition, housing, and other needs for veterans.

“Taps” was played at both services.

In a first for Rancho De Calistoga, a changing of flag ceremony was conducted on June 14, Flag Day, to retire the old flag and hoist a new one.