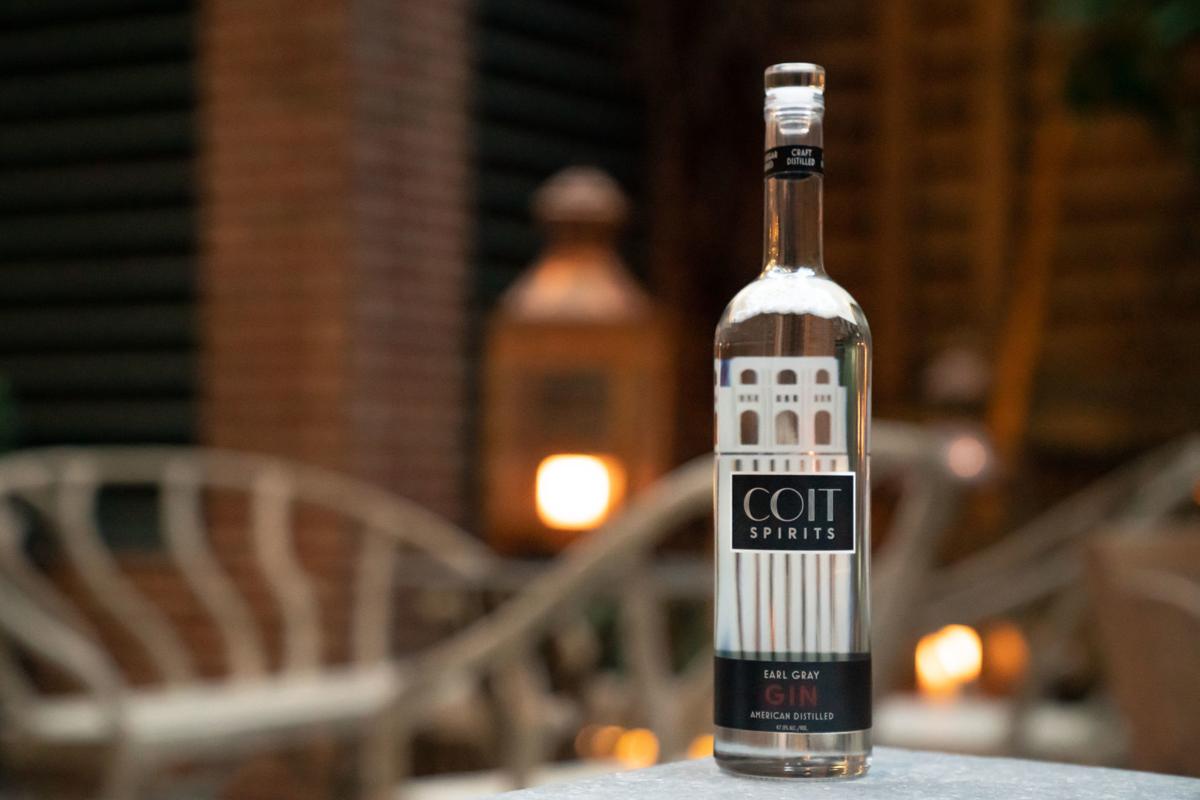 A bottle of Rowland's Earl Grey Gin, which he's released through his company Coit Spirits. Distillation emphasizes just flavor, which is why the bottle retains its clear color even though it's been flavored with the dark tea, Rowland said. 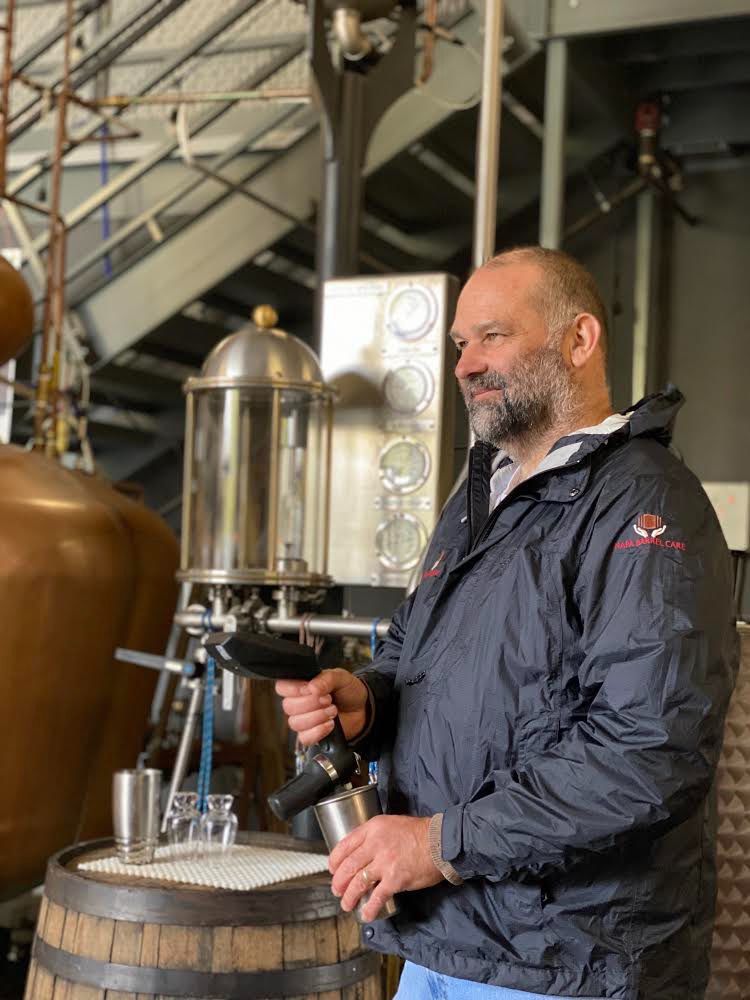 Vintner Gerry Rowland, who has taken on a new role as a gin distiller for his new company Coit Spirits. Rowland also owns Rowland Cellars, which has three Napa Valley-based wine labels.

Gerry Rowland knows a thing or two about tradition.

In founding his own wine label, Ramspeck, the Australia-born winemaker continues a family legacy of working in wine that spans centuries. He follows a self-described “old business model,” having grown his business – which has expanded to three labels, Ramspeck, Cenay and Rowland – by working exclusively with distributors and cutting out the tasting room, consumer-fueled model.

And Rowland Cellars, to this day, has a single-digit employee count: Rowland, his wife, Linda, “the bank, and the cat.”

Now Rowland is proving equal parts traditional and innovative, a paradox that can be summed up in a single word: gin.

While he’ll continue to make wine, Rowland, who resides in Yountville and has lived in the Napa Valley since 1988, has turned his attention to the spirit. He spent the last two years developing an Earl Grey Gin for Coit Spirits, his latest endeavor.

There isn’t much logistical overlap between the wine- and gin-making process. Wine, in working with grapes, focuses on a single ingredient; gin distillation involves multiple botanicals, plant-based extracts whose flavor can be imparted upon the spirit if brought to a high enough temperature. But both beverages are deeply rooted in aromatics and a sense of palette, according to Rowland.

“Winemakers drink a lot of things other than wine at the end of the day,” Rowland joked. He cited Australian and European gin, which has begun to move away from the classic juniper-based gin flavor, as inspiration.

“To be a gin, it has to have juniper in it,” Rowland explained. Juniper, the core botanical in gins, has often been the spirit’s most prominent character. In the last decade or so, though, there’s been movement towards other botanicals, like cucumber, rose petal – even cream, Rowland says.

That makes gin a kind of canvas, according to Rowland, who decided he’d make tea-distilled gin after taking a gin distilling course in 2018.

Its release is part of a larger spirits trend that’s begun rippling through the alcoholic beverage industry. Global consumption of gin was up 8.3 percent from 2017 to 2018, according to the International Wines and Spirits Record (IWSR). That spike was the largest gain by any alcoholic beverage across categories, per reports from IWSR, which referred to the phenomenon as the ‘ginaissance’.

At the same time, wine consumption dropped almost 1 percent in 2019, marking the first decline in demand in a quarter-century. That’s only made more complicated in California, where the industry is grappling with a glut market, although experts have said that the premium reputation of Napa Valley wine could serve as a buffer from general market volatility.

“It’s diversification on my side,” Rowland said. Though the focus is on gin, Coit Spirits is also producing a small amount of bourbon whiskey.

It’s been an exciting process for Rowland, who credited his winemaking background with helping him to quickly discern his preferred aromatics. Alongside the Earl Grey gin, Coit also has a Rooibos gin (a tea made from the fermented leaves of the South African Red Leaf Bush) and a Russian Caravan Tea gin (in which tea leaves are dried using pine needles, granting the product a kind of smokiness that Rowland likens to “softer mezcal.”)

Gin might make Rowland on-trend, but tea, especially as the primary botanical, makes him decidedly unique. Tea is an unstable botanical: Rowland’s first distilled tea gin lost its Earl Grey characteristics within a week of its being made, he said.

“I spent a year finishing off the gin recipe, and then another year working out how to stabilize it,” Rowland added. Because gin is made with multiple botanicals—typically five to 10, but sometimes more – working out which botanicals (and in what quantities) to use as stabilizers was an incremental process. Rowland, who estimates he did something like 400 distillations before distilling the gin commercially, could only vary one botanical at a time.

Ultimately, he settled on a combination of three botanicals that effectively made permanent the gin’s tea character. It was a time-consuming process, but one that paid off, he said.

“We solved a problem that we hadn’t seen other distillers who had played with tea (solve as well),” Rowland added.

There are a handful of other tea-distilled gins available on the market, Rowland added, but he’s already received numerous comments from tastings from people who have “said they’ve never tried anything like” his product. And he’s not done challenging himself; Rowland is grappling with a recipe for a gin distilled exclusively with botanicals indigenous to the West Coast. He said he believes it’ll be another year or so before that recipe hits its “sweet spot”.

Coit Spirits’ existing gins are bottled in Petaluma and packaged entirely in glass (including the cork, which Rowland notes can be re-used on wine bottles if it’s not recycled). They’ve also got nutritional information on their labels – serving size, caloric information – a trend marketing experts have urged the wine industry to consider implementing as spiked seltzers (famously 100 calories per can) have caught the eye of health-conscious consumers.

This is all still fairly new for Rowland – Coit entered the market only last year– but he’s hopeful. Local stores like Lawler’s Liquors, Browns Valley Market, Yountville Market and Sunshine Market have all begun stocking the Earl Grey Gin. Rowland said it’s only a matter of time until consumers take note.

“There’s not a lot of focus on gin (right now in the United States), but I think the consumer momentum will be quick, because they’ll be exposed when they travel,” Rowland said.

He’s excited to have a chance to put forth the product of two years of hard work. In a sense, he said, his wine and spirit lines are not as different as they might seem at first glance.

“It’s fun working with distilled teas in that they’re almost like a wine,” he said, nodding to the way the tea characteristic can be present on a drinker’s palate. “They tell the story of the gin from start to finish.”

Prohibition descended on Napa and U.S. 100 years ago; legacy remains

A nationwide ban on alcohol took effect 100 years ago. How'd the experiment work out?

Cocktails in wine country - Looking for a change

Napa, whether describing the city or county, is always synonymous with wine country. Yet after a day of walking through wineries sipping wine,…

The World in a Glass: Tasting history at Charles Krug

Study with Napa Valley College this summer in Spain and France.

A bottle of Rowland's Earl Grey Gin, which he's released through his company Coit Spirits. Distillation emphasizes just flavor, which is why the bottle retains its clear color even though it's been flavored with the dark tea, Rowland said.

Vintner Gerry Rowland, who has taken on a new role as a gin distiller for his new company Coit Spirits. Rowland also owns Rowland Cellars, which has three Napa Valley-based wine labels.