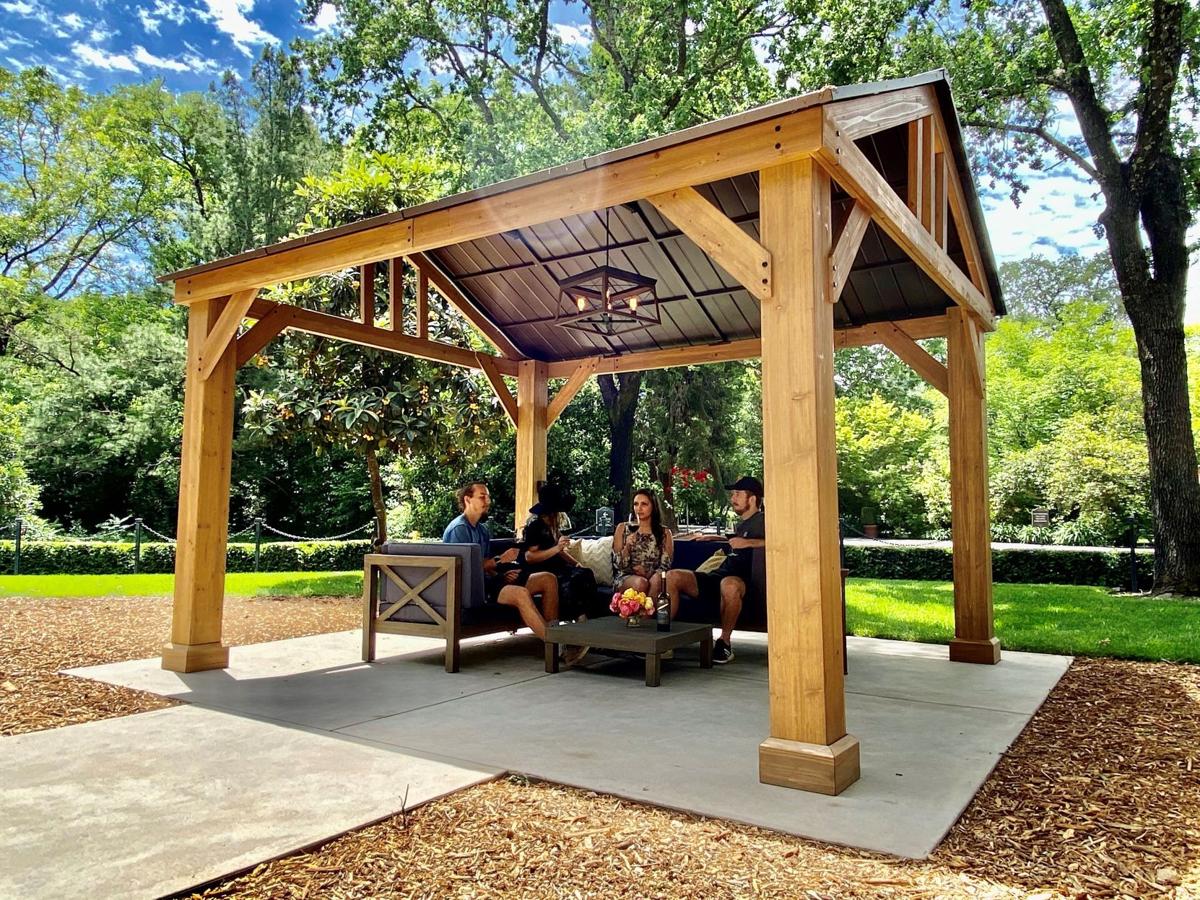 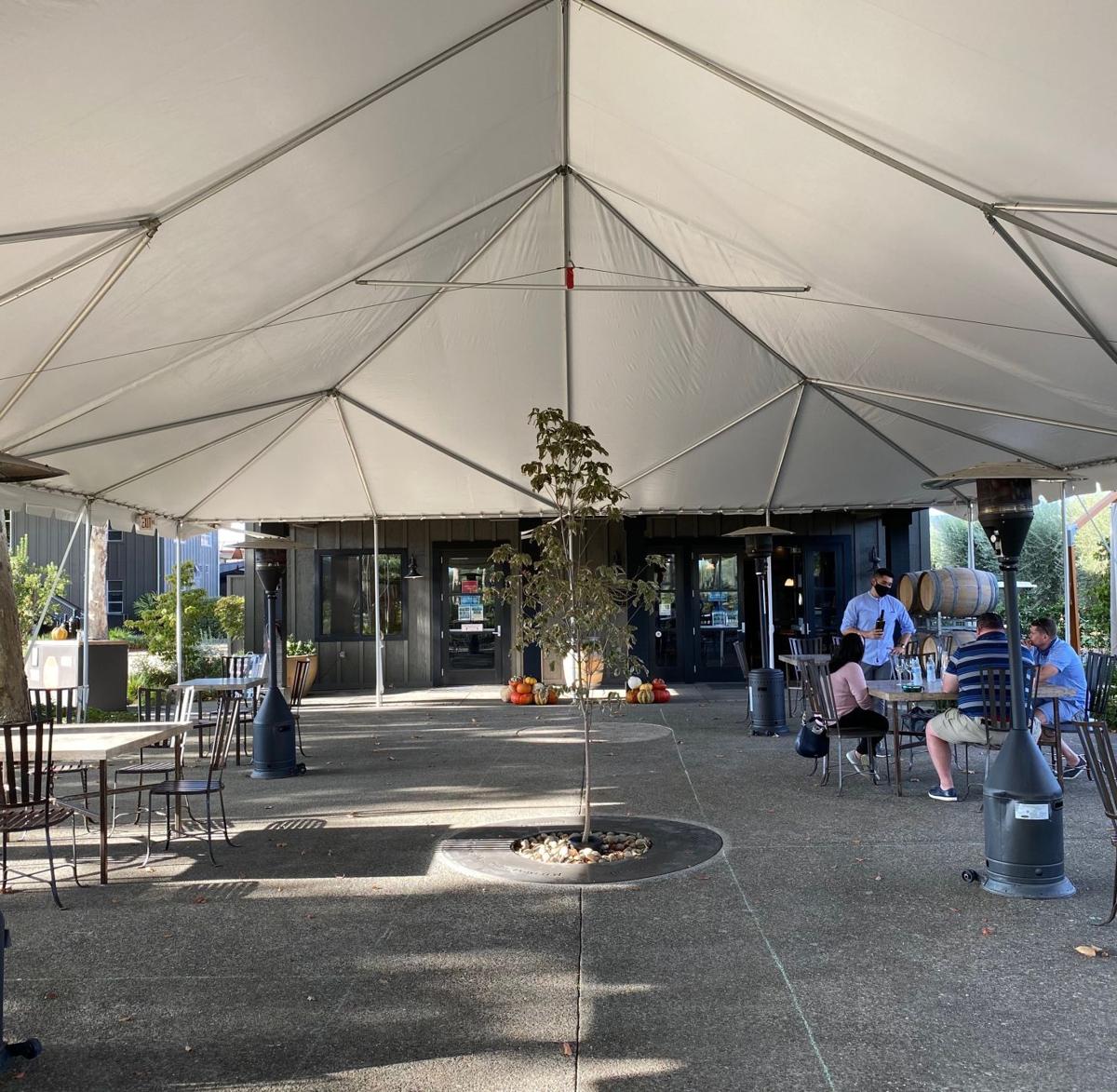 The now-tented outdoor patio at Honig Vineyard and Winery. Like many of its industry peers, the winery has taken steps to accommodate guests during outdoor tastings, though it is now permitted to host indoor tastings at 25% of previous capacity.

Last week marked Napa County’s entrance into the orange tier of California’s reopening blueprint — and the first time many of the region’s wineries will reopen for indoor tastings since March.

Some of the Napa Valley’s wineries reopened briefly for indoor tastings in early June. Then regional spikes in coronavirus cases and a subsequent reopening rollback in July relegated guests more firmly outdoors until now.

For most of the summer, wineries adapted as best they could: they hosted tastings exclusively outdoors, setting up tents or shade cloths to shield guests from the sun, and closed amid serious heat spikes or hazardous air quality.

But with consistently less-agreeable winter weather quickly approaching, indoor tastings were at the forefront of the minds of most industry members, according to Rex Stults, vice president of industry relations for the Napa Valley Vintners. Typically, the region sees some cold and rainy weather by this point in the year, he added.

“People are resilient and creative, and they’ve been doing what they can to get by — that’s expected. It’s positive,” he said of the industry. “But to the degree that we can facilitate measures to make (the situation) a little better for vintners — and moreover, for their customers — in a way that makes sense — that’s what we’re working on.”

Safety will be the emphasis for wineries hosting indoor tastings, according to Stults.

The move into the orange tier caps indoor wine tasting capacity at 25% or 100 people — whichever is less, according to state guidelines. Though that’s far below regular levels of indoor tastings, it’s a welcome accommodation, according to Jim Morris, vice president of guest relations at Charles Krug. The winery hosted its first guests indoors since March on Monday, he said.

As Napa County’s wineries were given permission to reopen in June, Charles Krug was finishing up its outdoor tasting area, which now includes a number of cabanas, Morris said. That area has greatly expanded Charles Krug’s ability to host guests outdoors, though conditions have at times proved volatile. The winery has been closed to the public for 26 days over the last five months because of fires, poor air quality, power shutoffs and the like, according to Morris.

During Monday’s Red Flag warning, conditions were “way too windy” in St. Helena to host wine tastings outdoors, Morris said. So the winery took advantage of the newly relaxed regulation and moved its tasters indoors.

“It really is based on the comfort of our staff and customers each day,” Morris said about indoor versus outdoor tastings. “I think eventually there will be a point in time where we’ll move back indoors full time … I would say starting in mid-November, we’ll be mostly indoors after that.”

Honig Vineyard and Winery is hoping to accommodate guests outside for as long as the weather permits, according to Director of Communications Stephanie Honig. Out of an abundance of caution, the winery will continue “at a red (tier) level,” Honig said, with plans to add back a single indoor option — a reserve tasting for up to six people.

“Otherwise, we’ll continue operating outdoors, because we’ve got a beautiful tent,” with heat lamps, Honig said. There will no doubt be wineries that lean heavier on indoor capacities through winter weather, she added.

Winter months — typically between late November through March or April — have historically been Napa Valley’s slow season. An inability to host guests inside would only have worsened this lull, according to Tim Keith, co-owner of Rebel Vintners tasting room in downtown Napa.

For “urban” wineries like Keith’s, the challenge presented by outdoor tastings has been significant: its outdoor capacity is limited by adjacent businesses and infrastructure.

“If we can’t be open indoors over November, December, January, February — that’d be pretty disastrous in many ways,” Keith said. “(We) might as well be shut down at that point.”

His tasting room has partnered with Oxbow Cheese & Wine Merchant to create single-serving charcuterie boards. Because serving a “meal” with alcohol essentially categorizes the tasting room alongside restaurants, which can open at 50% capacity indoors, Rebel Vintners plans to open at 50% capacity indoors next weekend, according to Keith, who said he remained optimistic about business going into the winter.

“I’m not entirely doom and gloom,” he said. “It seems like we’re getting a lot of travelers from within a 60-mile radius … I don’t see that really changing, though we’ll probably see (fewer) reservations and that can make things a little more anxious.”

“A lot of businesses are in a world of hurt, and hospitality businesses have taken a bigger blow than most,” she said. The organization’s messaging this winter will further expand upon the idea that Napa Valley is “a beautiful place to visit at all times of the year,” Gallagher said.

“We’re encouraging people to think about the other 10 months of the year,” not just September and October, the tourist high season, Gallagher added. “During COVID we’ve done a two-hour (driving radius) bullseye — (marketing outreach) to people who can get into the car and drive here.”

Those are visitors who could potentially come to Napa Valley multiple times a year, she said.

The wine industry generates $9.4 billion for the local economy, NVV’s Stults said, referencing numbers from the latest industry economic impact report. He emphasized the importance of “working together” to ensure the county remains in the orange tier through the winter.

“There are tens of thousands of us that work directly or indirectly in the wine industry,” Stults said. “The health and well being of this industry is important to far more of us than just the wineries out there — it’s important for this valley’s entire economy.”

Hurt by the pandemic and wildfires, some Napa Valley vintners request loosening of winery regulations

Wineries need help from the Board of Supervisors to survive the economic impacts of wildfires and the pandemic, local vintners say.

As cases spike in Napa County, targeted businesses prepare to roll back operations

In the wake of spiking COVID cases, breweries and bars face another complete shutdown; indoor dining and wine tastings may be once again prohibited.

Under Phase II, St. Helena's residential customers are limited to 65 gallons of water per person per day.

The region is still welcoming visitors, though that could change overnight as the Bay Area's ICUs fill. For businesses, the question is now 'when,' not 'if.'

The now-tented outdoor patio at Honig Vineyard and Winery. Like many of its industry peers, the winery has taken steps to accommodate guests during outdoor tastings, though it is now permitted to host indoor tastings at 25% of previous capacity.