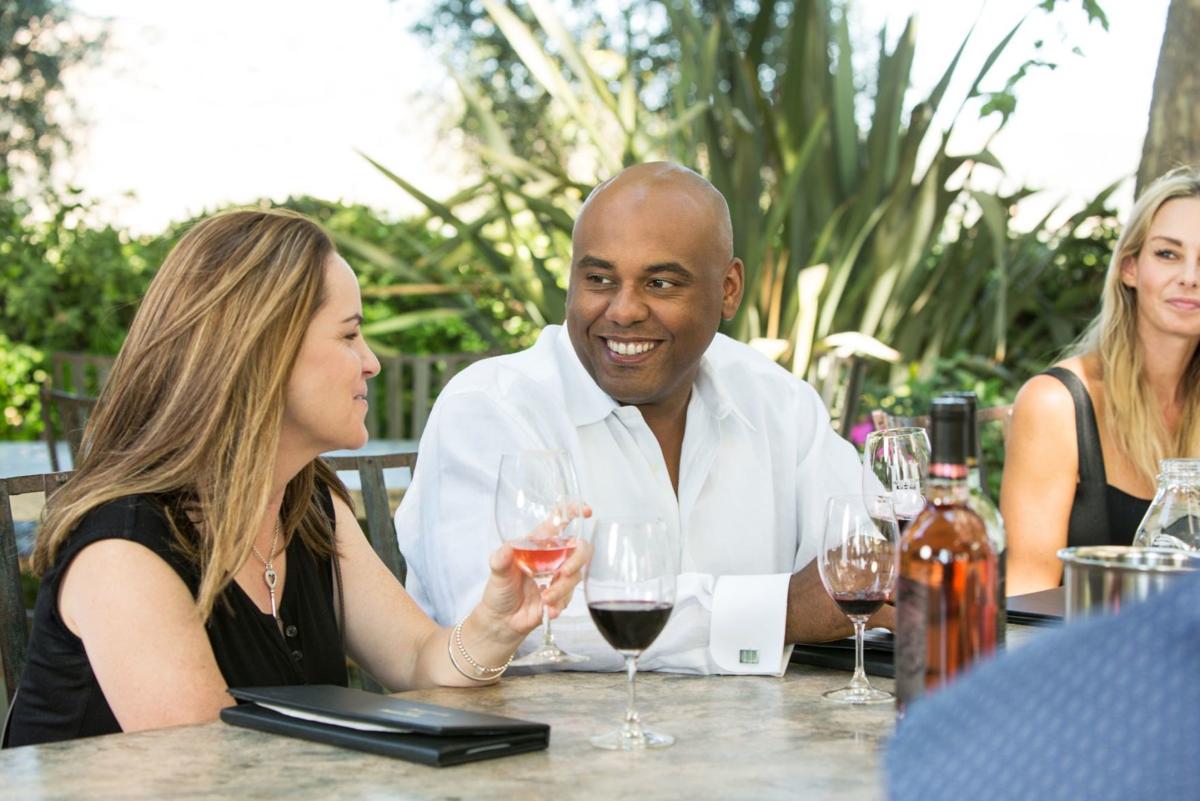 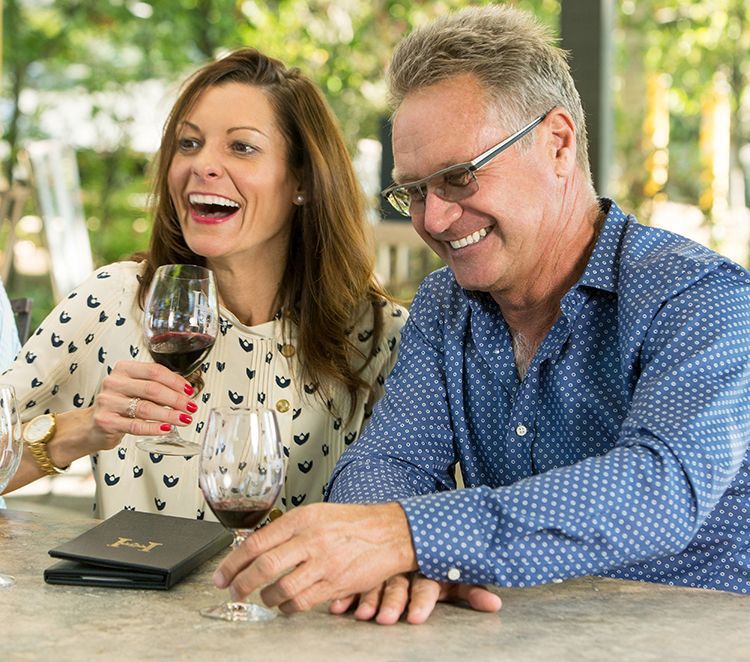 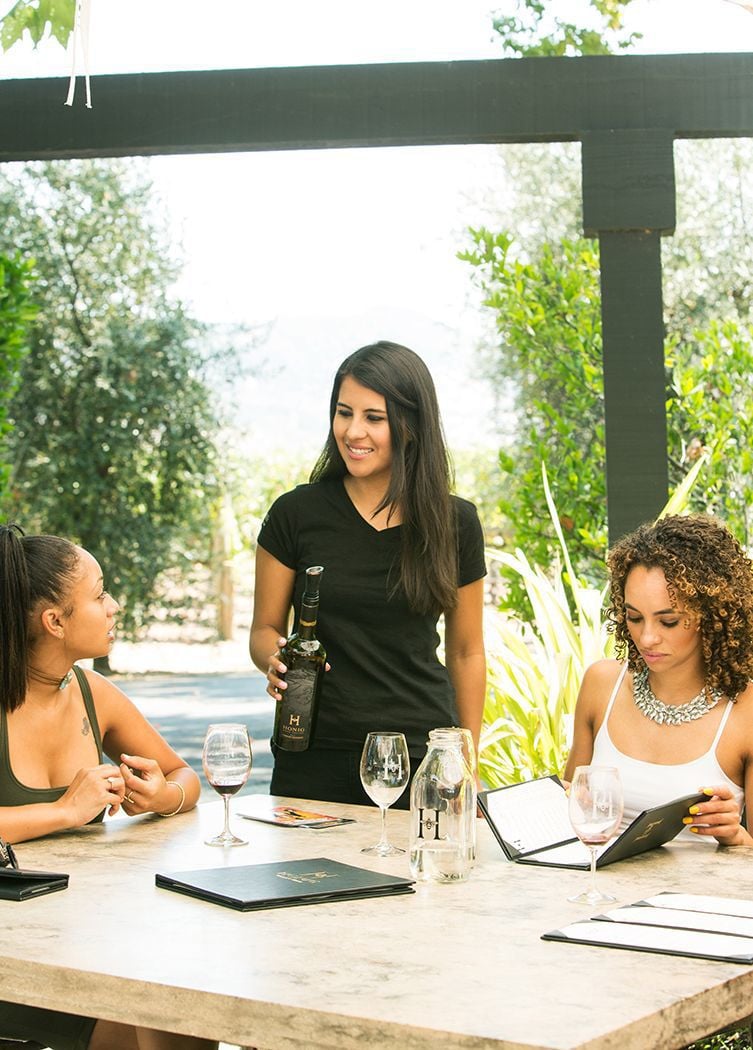 At a typical wine tasting, you wouldn’t think twice about the neck of the bottle clinking against the lip of the glass during the pour.

Then again, you wouldn’t expect face coverings or smudged wine glasses either.

Welcome to wine tasting in the time of COVID-19.

Honig Vineyard & Winery in Rutherford resumed tastings earlier this month under strict protocols intended to protect visitors and staff from the coronavirus. Each guest must arrive wearing a face covering, although they can be put aside once the guest is seated for the tasting.

Any exceptions or wiggle room? No, says Stephanie Honig, who’s in charge of international sales and public relations.

“We have to enforce the protocols because it wouldn’t be fair to the other customers,” she said. “I think people understand that we’re all trying to get past this and stay safe and make everybody feel safe.”

During a test run for friends and family, Jennifer Brown greeted a visitor at the reception desk, asked him to use hand sanitizer, and took him to a balcony overlooking the Honig vineyards — one of three widely separated tasting areas intended to prevent contact between groups.

Group tastings are limited to six people per group, and each group will interact with only one member of the tasting room staff.

And if you plan on showing up unannounced and scheduling a tasting in an hour, forget it — with only 20 people allowed to taste at a time, Honig expects all available tasting slots to be booked in advance.

Honig said the reopening plan had been in the works for over a month before it ramped up based on guidance from the county and the governor’s office.

During the closure, Honig was able to keep its entire staff employed by reassigning the hospitality and tasting room staff to other jobs (except Brown, who spent a few months sheltering at her part-time home in Texas).

Antonia Picardi, who works in tastings and hospitality, was reassigned to the bottling line, which she called “quite a workout.” Then she was transferred to the cellar.

“I was able to see the back end of the wine world,” Picardi said. “To actually move wine from tank to barrel, barrel to tank was a really cool experience.”

The new assignments resulted in earlier hours, new friends, and a deeper knowledge of wine to pass on to visitors in the tasting room.

“For example, now I know what American versus French oak smells like,” Picardi said. “We were really lucky to have that opportunity.”

With distribution across the U.S. and in 25 other countries, Honig’s direct-to-consumer sales at the winery account for only 13% of its business, so the prohibition on tastings wasn’t as painful as it was for smaller, less established wineries.

Honig said domestic retail sales are up, but restaurant sales were virtually non-existent during the height of the pandemic, and international sales are sluggish. Overall, sales for April and May were a little over half what they were last year, she said.

With tastings resuming, Honig doesn’t expect a lot of visitors to be flying across the country, but she suspects plenty of Bay Area residents will be eager to get out of the house.

“I expect that we’ll have to turn a lot of people away,” she said.

As Brown poured the winery’s Reserve Sauvignon Blanc into a clean glass, Honig noted that it had a few smudges. Glasses are still being cleaned, she said, but they’re not being buffed by hand after they come out of the dishwasher.

“None of us are crazy about the little spots, but for the time being we’re trying to have as few towels and touched surfaces as possible,” Brown said.

Also in the name of hygiene, the winery has ditched the metallic pouring spouts ordinarily used during tastings. To prevent contamination of the bottle, tasting room staff are instructed never to place the bottle on the table and to pour without letting the neck of the bottle touch the lip of the glass. Instead of one communal dump bucket, individual spittoons are available on request.

As the tasting progressed from Sauvignon Blanc to Cabernet Sauvignon, Brown explained the characteristics of each wine and Honig reflected on the difference between a traditional in-person tasting and the virtual tastings she’d been leading during the pandemic.

With the virtual tastings on Instagram Live, “I don’t make it about the wine,” Honig said. “I introduce the wine and explain what we’re doing, but it’s more of a conversation about whatever, centered around the wine. … I’m not selling, it’s just branding and marketing.”

“It’s a good option,” she added. “But it can’t compare with being here.”

Drive-up COVID-19 testing will be available in St. Helena on Monday and Tuesday.

Napa County reported 6 additional cases of COVID-19 on Tuesday, bringing the total since March to 245. Deaths, however, remain at 4.

Napa County COVID cases rise to 258 on Thursday, up 7

Five of the new cases on Thursday were from unknown sources, the second day where the majority of cases were not connected to previously known sources.

California’s vacation industry is open for business. Proceed with caution.

Some Californians are slowly emerging from their homes, and traveling to other parts of the state for short vacations and road trips.