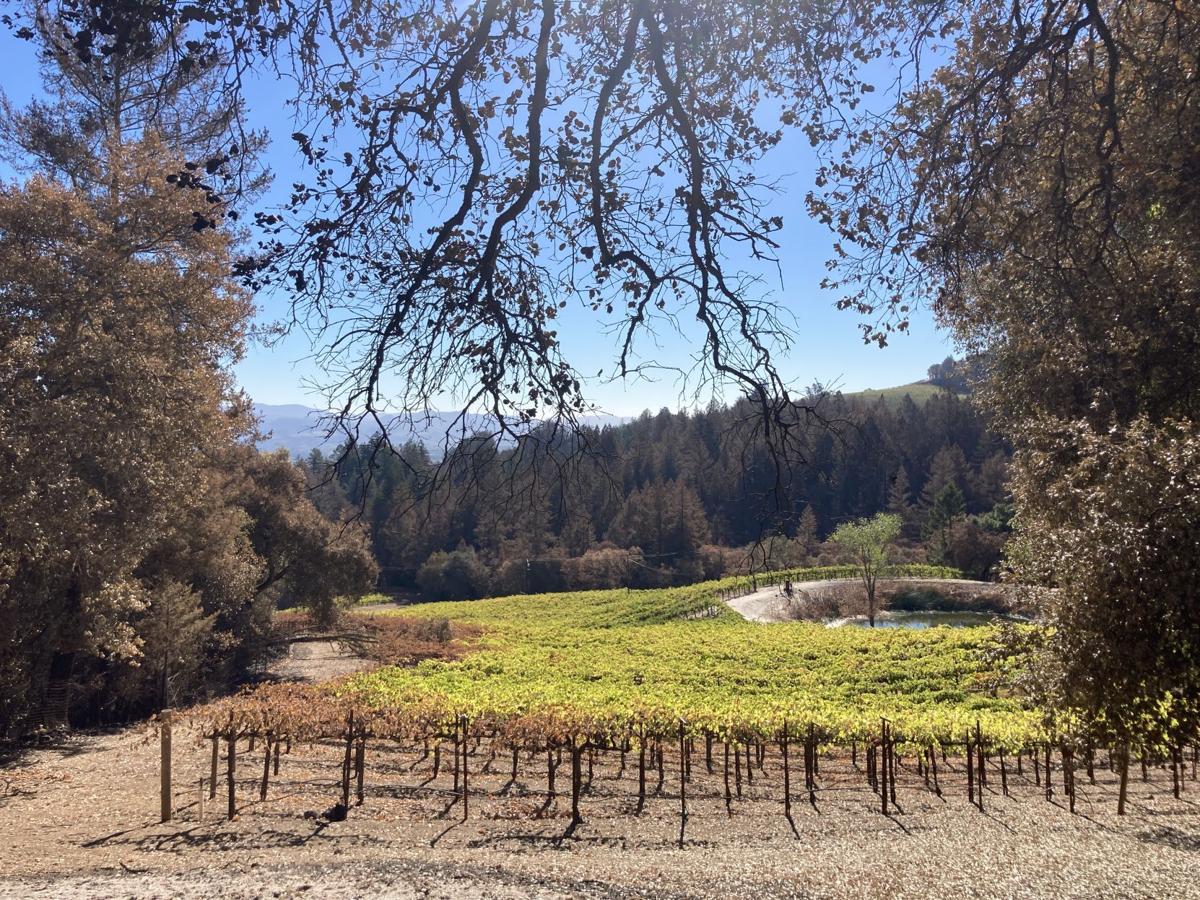 A vineyard amid burned landscape on Spring Mountain Road. Vineyards have long been known to act as fire breaks, though many of the region's vines did sustain substantial damage from smoke. 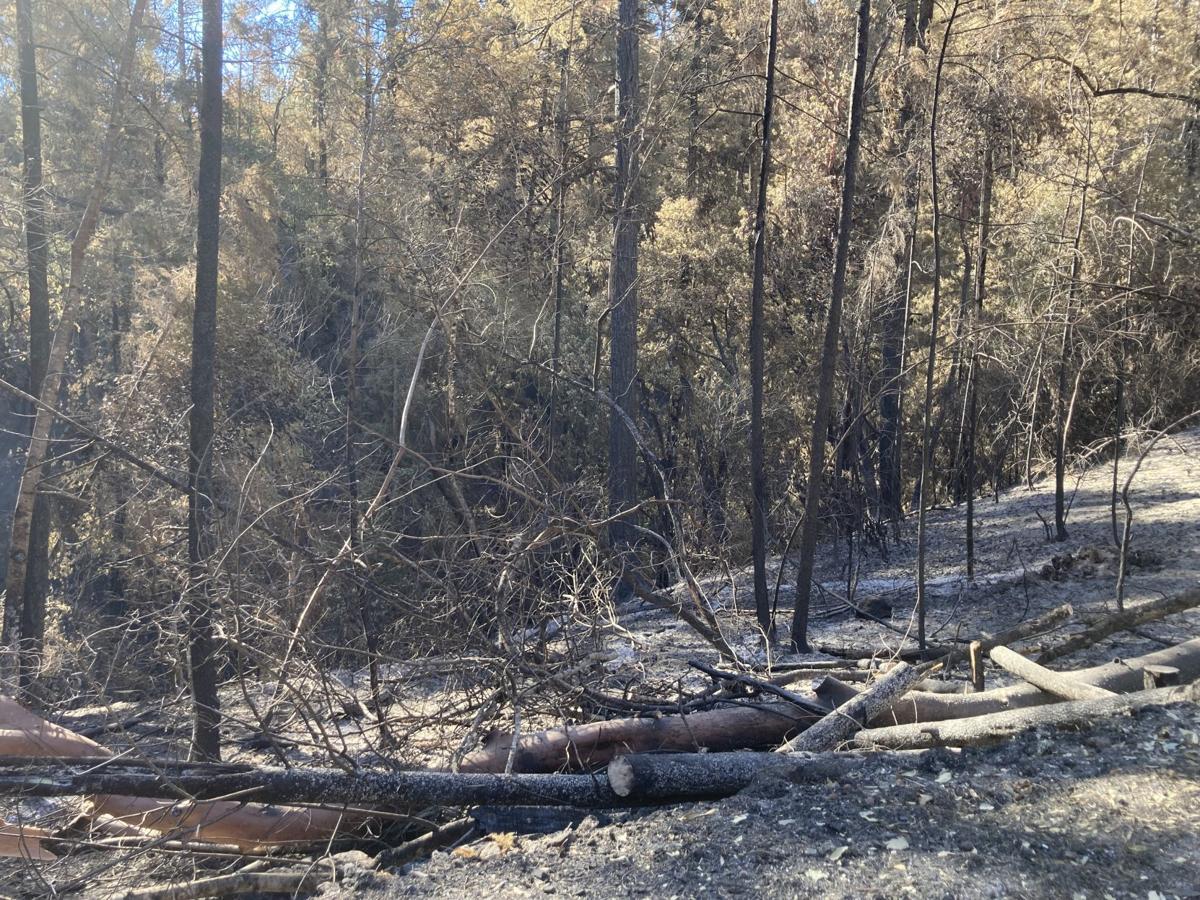 Burn scars on Spring Mountain Road, where a number of wineries and vineyards sustained structural damage to their properties.

More than two weeks after the Glass Fire erupted in the hills of Napa County, the road into Spring Mountain remains closed.

Driving through the outskirts of St. Helena, it’s not immediately obvious why. The tail end of Spring Mountain Road, a windy, rural way home to a roster of well-known Napa Valley wineries, is still green, the surrounding forest still observably lush.

Wind deeper past the blockade, though, and you’d see; each side of the road shows clear signs of having been scorched by fire. What had once been a forest almost tangled in its own wild vibrancy is now deadened, dusted by milky ash, even its tallest redwoods scarred black and brown high into their canopies.

To Katie Lazar, Director of Sales and Marketing at Cain Vineyard & Winery, the scene was a jarring one.

“It’s shocking, because it’s all black driving up Spring Mountain Road, and that’s the opposite of what we’re used to,” Lazar said. “Exposing (guests) to that shock — I just don’t think it’s great.”

It may not be safe yet, either, according to Lazar. On Thursday, crews were continuing work on the forests around Spring Mountain; trees, burning from the inside out, were still audibly falling in the forest as Lazar and husband Christopher Howell, Cain’s winemaker and general manager, made the first of their trips back Spring Mountain, Lazar said.

Each time the pair makes their way to Cain, they return to their surviving vines — and not much else. Lazar and Howell lost their home to the Glass Fire; the winery burned, too, taking with it Cain’s 2019 vintage, stored in the winery, and the early makings of its 2020 vintage. Smoke stole the rest of this year’s crop, about half of it still on the vine.

Cain is not alone. Of the 27 wineries or vineyards that suffered structural damage amid the Glass Fire in Napa and Sonoma counties, more than half are on Spring Mountain. Infrastructure on the mountain was destroyed; roads need repairing and power needs restoring, as does now-destroyed cell service and internet capability.

Shock factor aside, much work stands between the mountain’s wineries and the moment the area can welcome back guests.

“We have been moving fast and slow at the same time in a situation like this,” Lazar said. “The hardest part was figuring out — what do you do first? Now, weeks in, we sort of know, but we also still don’t know.”

A number of the region’s wineries are boutique, family-owned endeavors, producing in the neighborhood of 5,000 cases of wine each year, many exclusively from fruit grown on the mountain. Mountain fruit is notoriously tough; vines, growing in rocky soil prone to very little water retention, produce fruit while under natural stress. The end product, the valley’s hillside growers have long claimed, is a grape more intense and flavorful than one grown on the valley floor.

There is a sense that Spring Mountain’s winegrowing community, facing down the aftermath of the Glass Fire, will behave similarly.

“We survived the recession, the fires in 2017 and in 2019. We’re independent mountain people,” Paloma Vineyard Owner Sheldon Richards said, describing the residents of what he called Spring Mountain’s ‘hill country.’ “We work hard, we play hard, and we’ll survive.”

While the fires still burned on the mountain, Richards and a band of neighbors pulled overnight shifts every night for more than a week, he said, watching the flames even after firefighters had curtailed the worst of the blaze. In the end, flames drew right up to Richards’s property line, but Paloma was spared physical damage.

Still, smoke claimed something like 85% of Richards’ 2020 crop; he’s still waiting for test results on the remaining 15% of his grapes, which saw smoke during the LNU Lightning Complex fires. And visitation, which Richards said had ground to a halt almost completely because of the pandemic, has officially dropped off entirely — partially because of damage to the road.

“I’ve had a couple of people say already, ‘can we come up?’” Richards said, “The minute the road is open, there will be some tasters. But it won’t be like the good old days, and we’re going into slow season.”

Comparatively, Richards is lucky. His neighbors on the mountain, including Sherwin Vineyards General Manager Matt Sherwin, have also pondered when they might once again welcome back guests — it’s just that Sherwin Vineyards no longer has a winery to welcome them to.

But the loss is now behind them, Matt Sherwin said, and support from the community has been “crazy.” There’s been some discussion of holding tastings at nearby restaurants, Sherwin said, adding that the winery’s hospitality manager has been busy replying to the more than 800 emails the winery received from former guests and wine club members.

“We will probably host some tastings (at restaurants) for folks who are close referrals or longtime customers,” Sherwin said. “We’re hoping once evacuations are lifted and everything (is made safe again) in our area, we’d be able to set up an area to host a small number of tastings on site, or even at my folks’ house nearby.”

Spring Mountain wineries destroyed in the fires may have to get creative as they think about hosting guests, according to wine marketing veteran Paul Wagner.

“For many of these wineries, direct-to-consumer sales are the primary source of revenue, and if they lose that, it’s not as if they can go make it up somewhere else,” Wagner said, expressing a hope that the county would be willing to work with wineries on temporary solutions. Wineries could partner with neighboring tasting rooms spared by flames, he said, or otherwise set up an area like Sherwin had pitched.

The county proved accommodating toward wineries that sustained damage in 2017, according to Rex Stults, Vice President of Industry Relations at the Napa Valley Vintners.

“We have not really dug into the conversation (around hosting guests again) yet, but it is at the top of the list,” Stults said, adding the Vintners had been working with impacted members on a daily basis to offer resources and advice. “It’s not only about where you can taste wine — you need tank space, you need to make the wine somewhere else, and use permits (have) a gallon capacity.”

He anticipated cooperation between the industry and the county, Stults added.

Many of the mountain’s damaged or destroyed wineries have already stated their intent to rebuild; that includes Sherwin Vineyards, which Matt Sherwin said had already been issued a cleanup permit and spoken with engineers and architects, and Flying Lady Winery, which may expand its ownership model in order to welcome new stakeholders, according to Founder David Nassar. The list goes on, according to Schweiger Vineyards Winemaker Andrew Schweiger.

“Everybody I’ve talked to who lost structures is planning to rebuild,” Schweiger said. Schweiger’s own winery survived, though it’s currently undergoing treatment for smoke abatement, and he is concerned for the fate of his vineyard.

The path forward for Spring Mountain’s community will be highly individual, Schweiger said — some vintners and growers, like Sherwin and Cain’s Lazar, have significant clean up to do. Others could be positioned to welcome back customers once the road reopens and power is restored.

There will be obstacles for Spring Mountain to face in the future, too, Lazar knows: she and Howell, as winemaker, will have to think long and hard about how to bridge the gap of their two lost vintages in coming years. Then there’s rebuilding the winery itself, which Lazar thinks could take as long as three years to complete. Still, they’ve begun the process of moving forward.

“There were things (about Cain) that we didn’t like, in terms of trellising and row spacing — the same was true for the winery. There had been no changes since it was built in (the 1980s),” Lazar said. “I’ve been saying this through COVID, too, but a crisis is a terrible thing to waste. This is an opportunity to rethink.”

Schweiger, too, spoke proudly of the region’s resiliency.

“It takes a lot more than a disaster like this to move a mountain,” he added.

Hurt by the pandemic and wildfires, some Napa Valley vintners request loosening of winery regulations

Wineries need help from the Board of Supervisors to survive the economic impacts of wildfires and the pandemic, local vintners say.

Letters: This is an issue of urgent public safety.

Letters: It is a vital lifeline for mountain communities.

The City Council issued this proclamation on Oct. 27 honoring the city employees who helped respond to the Glass Fire.

Calistoga is vulnerable to future wildfires, but a new high tech digital mapping system will aid firefighters in real time.

A year of pandemic behind them, Napa Valley's wineries cast hopeful eye toward future

Napa Valley's wine industry may never return to normal — and that could be a good thing, experts say.

A vineyard amid burned landscape on Spring Mountain Road. Vineyards have long been known to act as fire breaks, though many of the region's vines did sustain substantial damage from smoke.

Burn scars on Spring Mountain Road, where a number of wineries and vineyards sustained structural damage to their properties.