The rainbow flag symbolizing the LGBTQ rights movement was raised on the flagpole outside Napa City Hall during a June 1 ceremony, marking the first time the banner has been flown in official city support of Pride Month. 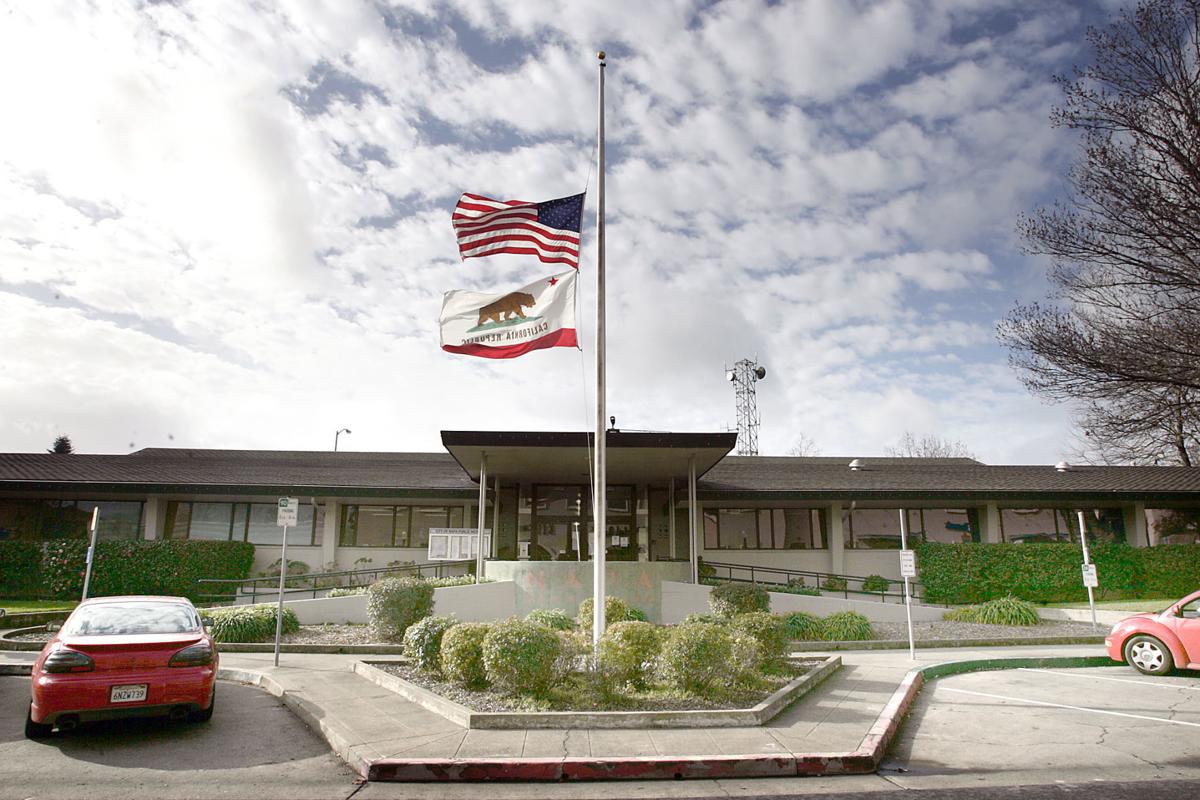 The U.S. and California flags outside Napa City Hall were flown at half-staff in December 2012, in remembrance of children and teachers who died in the shooting at Sandy Hook Elementary School in Newtown, Connecticut.

Flags unfurled outside Napa City Hall to support special causes will soon have a pole of their own.

The City Council last week approved a new flag-flying policy. With the new arrangement, Napa will be able to display the Stars and Stripes and the Bear Flag on separate poles – with a third available for banners like the LGBTQ rainbow the city raised for the first time this June in support of Napa’s Pride Month.

Discussion of a new flag arrangement began in May, shortly after councilmembers approved a City Hall display of the rainbow flag in a gesture long sought by advocates for the lesbian, gay, bisexual, transgender and queer community.

While the gay-rights standard was raised on the same pole as the U.S. and state flags starting June 1, city staff settled on a fresh layout that will place future banners side-by-side above a landscaped area in front of City Hall’s east steps.

The new poles will be placed to the left and right of the current one, each 5 feet shorter than the central mast where the Stars and Stripes will fly, according to Public Works director Julie Lucido, who said installation will cost about $22,100.

Raising a non-governmental flag outside City Hall will require a council member to ask for a resolution, which will specify the message to be showcased and the dates when the flag will be flown. The ceremonial flag will be flown only at City Hall, and no more than one such banner can be displayed at a time. The length of the display also would be limited to a period “reasonably related” to a specific event.

The revised policy also authorizes displaying the POW-MIA flag, the black banner honoring U.S. prisoners of war and service members missing in action, at Veterans Memorial Park on Main Street and the city corporation yard on Jackson Street. At City Hall, Napa may raise the flags of one of its three sister cities – Launceston, Tasmania, Australia; Iwanuma, Japan; and Casablanca Valley, Chile – to commemorate special events there.

Other city properties with flagpoles will fly Napa’s current maroon-blue-green municipal logo introduced in 2015, rather than an earlier version from the late 1980s.

When Napa’s LGBTQ community celebrates its presence in June, the rainbow banner that is their symbol will fly in front of City Hall.

The new official symbol for the city of Napa adds a splash of water, color and grapes.

The closing act of one Napa-area school may pave the way to a fresh start for another.

The Napa Valley Unified School District has approved displays of the banner celebrating LGBTQ rights, joining the city of Napa.

Pride is Protest march set for Sunday in downtown Napa

The Rainbow Action Network and the People’s Collective for Change Pride will host a protest march on Sunday, June 28 at 10:30 a.m. at Napa City Hall.

The rainbow flag symbolizing the LGBTQ rights movement was raised on the flagpole outside Napa City Hall during a June 1 ceremony, marking the first time the banner has been flown in official city support of Pride Month.

The U.S. and California flags outside Napa City Hall were flown at half-staff in December 2012, in remembrance of children and teachers who died in the shooting at Sandy Hook Elementary School in Newtown, Connecticut.