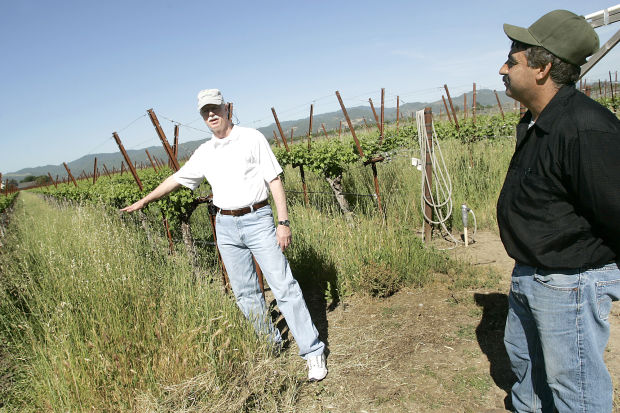 MONDAY - APRIL 29, 2013 - NAPA, CA - Jim Verhey of Big Ranch Vineyards, left, shows the height of the ground cover of native grasses in Ryan's Vineyard on his Big Ranch Road vineyard. He lets the grasses to mature and only mows after they mature and drop seeds, continuing the natural cycle of the vineyard. At right is Juvenal Magdaleno, foreman with Buckland Vineyard Management. J.L. Sousa/Register 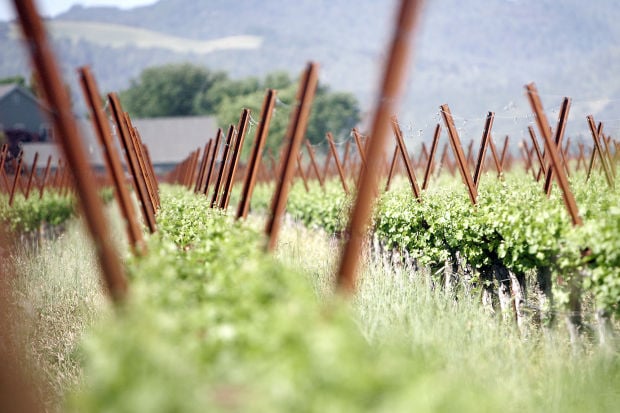 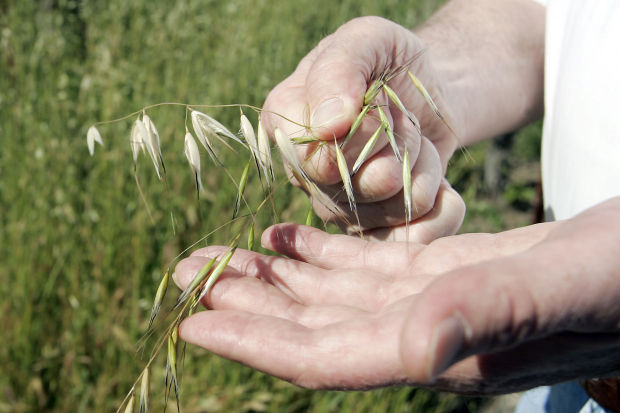 MONDAY - APRIL 29, 2013 - NAPA, CA - Jim Verhey of Big Ranch Vineyards shows the seeds of a native grass that grows as ground cover in Ryan's Vineyard on Big Ranch Road. Verhey is doing things a little differently in his vineyards as he tries to protect against higher temperatures, including letter ground cover grow taller and employing a modified lyre trellis system. J.L. Sousa/Register 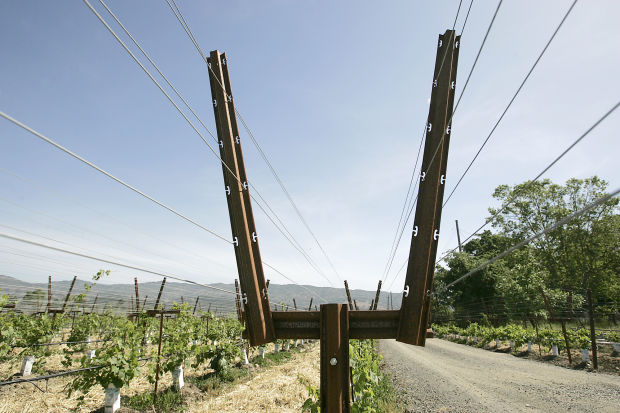 MONDAY - APRIL 29, 2013 - NAPA, CA - Jim Verhey of Big Ranch Vineyards employs a modified lyre trellis system in his vineyards, which allow an increase in production and quality, while protecting the clusters from extreme temperature. J.L. Sousa/Register

Might climate change help push Napa Valley wines off the store shelves of the future, and put bottles from Idaho, Canada or even China in their place?

A study published last month in the journal Proceedings of the National Academy of Sciences forecasts temperature increases triggering the loss of two-thirds or more of the Napa Valley’s current grape output by 2050, with similar losses projected in France and other prime winemaking regions.

The same trends of increasing average temperatures, the report’s authors predicted, also could enable a major northward shift in winemaking into the Pacific Northwest, central China and other regions once too cold for vineyards.

But would rising temperatures affect all grapegrowing havens equally? Some California researchers and growers are unsure how quickly rising global temperatures will affect the Napa Valley, pointing to a balance of inland and coastal weather elements that have produced a uniquely friendly environment for the vine.

For the climate change projection published last month, a team of nine researchers used 17 different climate models to gauge the effects of global warming on nine major winemaking regions, including California, the Bordeaux and Rhône regions of France, Chile and Australia.

One scenario assumed a rise in average temperature of 4.5 degrees Fahrenheit, while a second assumed average warming of 8.5 F. In either case, the academy’s model predicted sharp production losses in traditional wine regions, as rising temperature forces growers to irrigate more frequently to ward off heat damage, move vines to higher and cooler elevations, or pull out of unprofitable areas altogether.

California’s territory suitable for wine grapes is predicted to shrink by about 70 percent by midcentury, with an even steeper 85 percent loss forecast for France, Italy and the rest of Mediterranean Europe.

“What the report says is that using current grape varieties and current techniques, those areas would become not very good for producing wine,” said Lee Hannah, the report’s lead author and a senior research fellow for Conservation International.

“Vineyard (owners) are quite aware of the importance of climate and what they can do to adapt,” he said last month by telephone from his offices at the University of California, Santa Barbara. “That doesn’t mean Napa will be out of the wine business in 2050, but it does mean they’ll have to produce it differently — and it will almost certainly be more expensive.”

The same climactic changes that would disrupt grapegrowing conditions in Napa and Bordeaux, meanwhile, stand to open up or expand winemaking regions farther up the Northern Hemisphere — including British Columbia, Idaho and lands surrounding Yellowstone National Park.

However, such expansions also open the way for new conflicts between winemaking and wildlife. Many of the North American regions identified as suitable grapegrowing land in the future — including Idaho, Washington state and British Columbia — lie in areas coveted by conservationists for a Yellowstone-to-Yukon corridor that would shelter gray wolves, grizzly bears and migrating big game.

In China, the central hill country expected to become suitable vineyard land by midcentury also is the last major haven for the country’s endangered giant pandas.

Grapegrowers and scientists closer to Napa, however, painted a more complex picture, one driven by coastal air currents and by numerous differences in soil and elevation.

A 2011 study commissioned by the Napa Valley Vintners concluded that most climactic models may have inflated the rate of temperature change in Napa County by relying mostly on decades-old monitoring stations in Napa and St. Helena, close to the reflective surfaces of urban areas.

“At Napa State Hospital, the weather station is next to a paved road, an irrigated lawn and an air conditioner unit,” said Rex Stults, the Vintners’ director of government relations. “In St. Helena, the station is atop the local fire house. I can’t think of another place where a weather station should not be.”

While the older weather stations have measured a 4- to 5-degree rise in average temperatures over 60 years, information gathered from private weather stations and farmers’ logbooks during that time suggests only a 1- to 2-degree increase in the county’s rural districts, according to Daniel Cayan, a Scripps Institution of Oceanography climate researcher who led the Vintners study. Furthermore, the increases were concentrated in the overnight hours, with daytime peaks staying nearly flat since the 1950s, he said last week.

Napa County’s apparently steady daytime temperatures are a product of layers of cooler marine air from the Pacific Ocean and San Francisco Bay, which Cayan said actually may intensify as streaks of hot weather become more frequent in the Central Valley.

“The nature of (the shift) from one season to next is still under some question, but there have been years in the last 20 where we’ve seen a pattern of very warm air in the interior, while coastal regions influenced by the marine environment have not been excessively warm,” he said of the theory. “Whether or not that is a symptom of this mechanism is still under question.”

Even more important than the possibility of higher temperatures is their timing, argued Christopher Howell, winemaker for Cain Vineyard & Winery in St. Helena. While the effect of warmer winters would be light, an increase in peak temperatures at the beginning and end of the grape season — around the times of bud break and harvest — would affect both the length of the growing season and the sugar and acid levels that determine the wine’s character.

“We agree the low temperatures in winter and spring are not as low as before, but the high temperatures are not obviously getting hotter,” Howell said last week. “Averages are going up but highs aren’t, and those have more to do with how the wine will taste than the lows.”

Another grower saw more of a risk even in a relatively modest creeping-up of local temperatures, but not mainly from the heat itself.

“A 1- or 2-degree average temperature increase changes the kind of pests that can thrive” in Napa vineyards, said Jim Verhey, a Napa grapegrowing consultant who spent 25 years with Silverado Grapegrowers. If warming trends affect the county’s winter climate, pests that normally are destroyed in hard freezes — such as European grapevine moths, mildews and red blotch virus — can survive to the next growing season and threaten vineyards later, he said.

An important wild card for today’s winemaking powerhouses could be the beverage’s future in China, home to the world’s largest population and second-largest economy, said Hannah, leader of the Proceedings of the National Academy of Sciences’ climate-change report. As long as the nation’s incomes rise and continue building its citizens’ taste for luxuries, he suggested, winemakers may find it worthwhile to invest in increased irrigation and other steps to sustain their vineyards even in a hotter and more hostile climate.

“What happens to demand in China has a huge bearing on this,” he said. “The upper class is already bidding up wine prices at auction, and the prices of vineyards here and in Europe. If that trickles down to the middle class and you have that explosion in demand for wine, then it’s possible that all sorts of expensive ways to deal with climate change could become affordable.”

“Change is happening, but I think it’s well within our range of adaptability,” said Toby Halkovich, who directs viticulture for Cakebread Cellars’ 510 acres in the county and the Anderson Valley. “If hot summers become more frequent, we can use the tools we’ve already developed.”

Since joining the Rutherford-based winery 17 years ago, the spread in water use between the coolest and warmest growing seasons has been about 10 percent, according to Halkovich, who said that misting, leaf canopy management and adjustments to the irrigation pattern have so far sufficed to deal with the hottest conditions.

On his 21 acres in the Oak Knoll district north of Napa, Verhey has spent the past seven years remaking his vineyards with the future in mind — as well as larger harvests today.

A “modified lyre” trellis system lets light onto the vine tops but also provides more shade over the fruit, while Verhey’s overhauled irrigation system includes fewer but longer waterings to encourage deeper root penetration, enabling the plants to stay healthier in the dry summers. As a result, he said, his annual water consumption has dropped to about 10-12 gallons per vine even as the yield has risen from 4-5 tons an acre to 7-8 tons.

“It’s like savings; you can’t just wake up one day when you’re 55 and say to yourself, ‘I gotta save for my retirement so I’d better start now!’ By then, it’s too late,” he said.

“Am I solving the problem today? No. Am I working toward it? Yes.”

— Proceedings of the National Academy of Sciences report (April): http://j.mp/18jHt62

One September, when his wine grapes verged on becoming too sweet after months of exceptionally hot weather, Michael Silacci awoke in the middl…

MONDAY - APRIL 29, 2013 - NAPA, CA - Jim Verhey of Big Ranch Vineyards, left, shows the height of the ground cover of native grasses in Ryan's Vineyard on his Big Ranch Road vineyard. He lets the grasses to mature and only mows after they mature and drop seeds, continuing the natural cycle of the vineyard. At right is Juvenal Magdaleno, foreman with Buckland Vineyard Management. J.L. Sousa/Register

MONDAY - APRIL 29, 2013 - NAPA, CA - Jim Verhey of Big Ranch Vineyards shows the seeds of a native grass that grows as ground cover in Ryan's Vineyard on Big Ranch Road. Verhey is doing things a little differently in his vineyards as he tries to protect against higher temperatures, including letter ground cover grow taller and employing a modified lyre trellis system. J.L. Sousa/Register

MONDAY - APRIL 29, 2013 - NAPA, CA - Jim Verhey of Big Ranch Vineyards employs a modified lyre trellis system in his vineyards, which allow an increase in production and quality, while protecting the clusters from extreme temperature. J.L. Sousa/Register