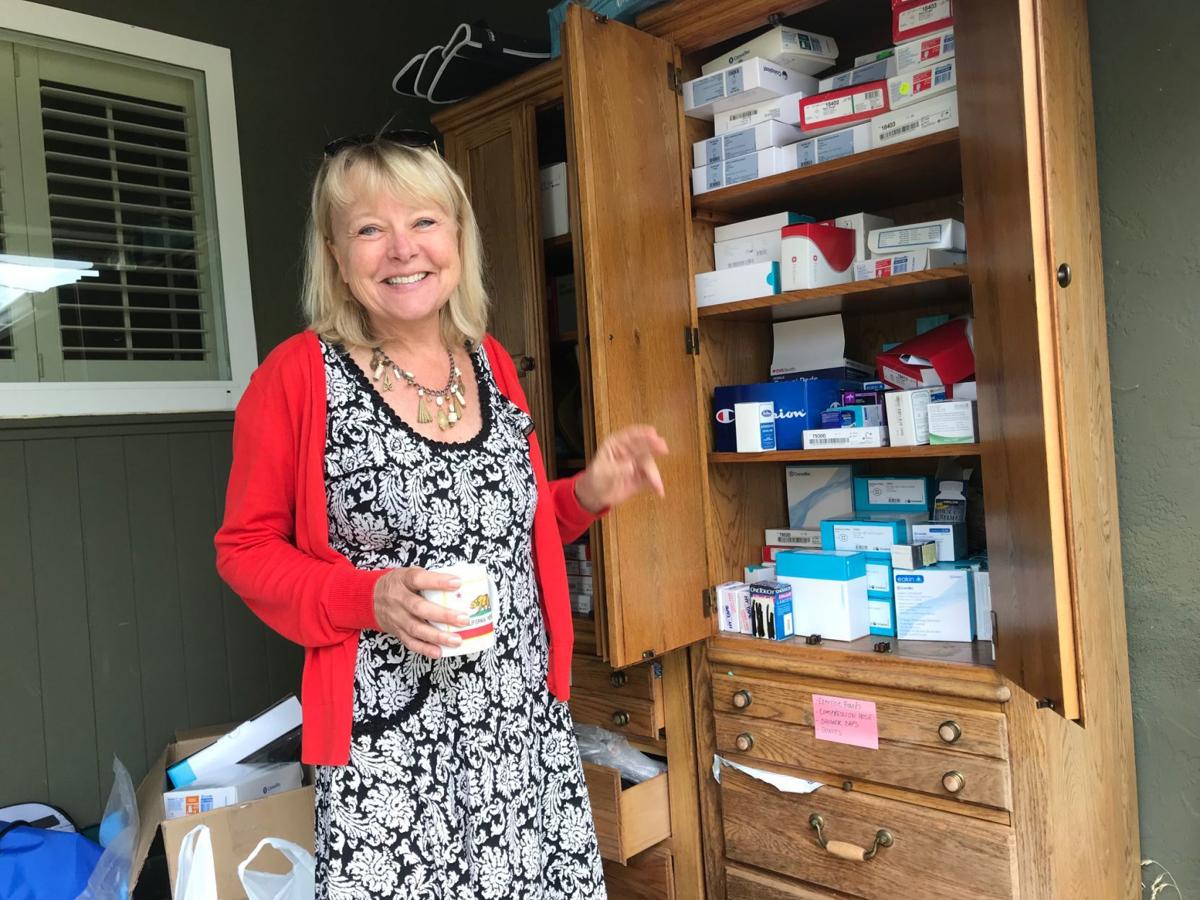 Yvonne Baginski's front porch doubles as the community's resource for free medical and care supplies. This is one of the services sponsored by her Share the Care nonprofit for older adults with needs. 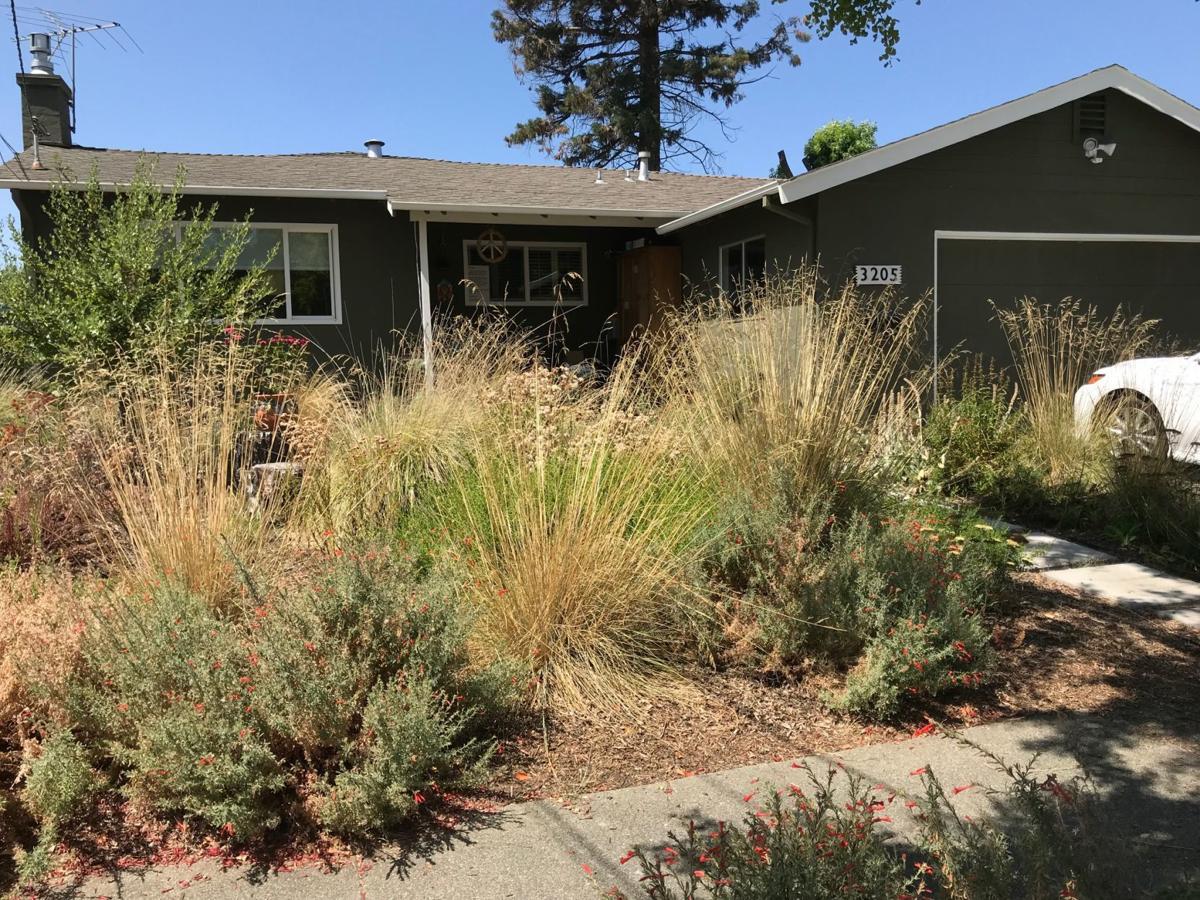 The tall native plantings in Baginski's front yard largely obscure the donated medical supplies that come and go from her front porch.

Yvonne Baginski's front porch doubles as the community's resource for free medical and care supplies. This is one of the services sponsored by her Share the Care nonprofit for older adults with needs.

The tall native plantings in Baginski's front yard largely obscure the donated medical supplies that come and go from her front porch.

Several blocks from Queen of the Valley Medical Center, behind a front yard landscaped with eye-catching wild grasses and flowers, sits a recycling operation unique to Napa County.

In the course of a year, tens of thousands of dollars’ worth of medical supplies are dropped off at Yvonne Baginski’s front porch by hundreds of donors, mostly anonymous, and quickly snapped up by hundreds of people in need.

“I’m open 24 hours a day. I tell people if I’m not here, just leave it,” said Baginski, who has operated her front porch exchange for most of this decade. “Some people come at 5 or 6 in the morning. It’s caregivers on their way to work.”

Discharge planners, social workers, employees at nonprofit agencies spread the word that new and lightly used supplies are available for the taking at the porch on Montclair Avenue.

The free exchange hit a rough patch in 2016 when a neighbor complained to city code enforcement about front yard clutter. Stung by the criticism, Baginski briefly shut her service down, but not for long.

“I did close it down, but people kept leaving stuff,” Baginski said.

She reopened mindful of the city’s stipulation that she clear the yard and hide her wares from public view. Today, a passerby likely wouldn’t know there was a humanitarian supply closet tucked behind the new landscaping.

The neighbor who complained has moved on, Baginski said. Her current neighbors are supportive.

“I don’t look trashy. I’ve been really careful,” Baginski said. Overflow that won’t fit the porch goes into her garage or house.

She takes “small stuff,” she said, while larger items such as wheelchairs, walkers, shower chairs and commodes are accepted by Williams Automotive at 238 Soscol Ave.

On a recent visit, Baginski’s living room contained nasal masks for CPAP machines to help people with sleep apnea and stacks of nutrition supplies, including dozens of bottles of Ensure and eight boxes of FiberSource, normally used by people requiring feeding tubes.

“They mix it with oatmeal and flavor with maple syrup. It’s a good source of food,” said Baginski, who delivers “cases and cases” to a low-income man in Berkeley.

Baginski is an advocate for senior citizens. She’s president of the Napa Alliance on Aging and director of Share the Care Napa Valley, a nonprofit she created that provides peer-to-peer support services and problem-solving for older adults. In 2018, she was elected to a two-year term to the California Senior Legislature representing Napa and Solano counties.

The Senior Legislature works at a policy level, making recommendations to the state Legislature. Share the Care’s porch is all about meeting people’s immediate needs, Baginski said.

Normally, her porch would be knee-high in donated diapers, but not this day, Baginski said. “The diapers have been going major,” she said.

Medical supplies are expensive, Baginski said. People don’t have insurance or insurance takes time to approve supplies that are needed now. The porch serves everyone, no questions asked. It does not give away needles or drugs.

“A lot of time they pull up having just been just released from the Queen from surgery,” she said. They sift through the items on her porch and take what they find useful, she said.

Does Baginski feel safe having the public visiting her home at all hours? “I have two dogs in the house who bark a lot when people show up,” she said.

Baginski would like to see more medical supply exchanges in the North Bay. She will be asking the Senior Legislature to endorse proposed legislation for a trial program for more formal exchanges in Napa, Solano and Sonoma counties.

The Gasser Foundation helped launch Share the Care with $50,000 annual grants for five years. Share the Care was able to branch out and offer a multitude of senior support services, including handyman repairs, friendly visitors, transportation services and crisis management.

With the start-up grants now ending, Baginski said she and her board of directors are seeking other financial support. Community Projects has given Share the Care a $15,000 grant to help people pay for dental care, while Queen of the Valley gave $10,000 to install grab bars in bathrooms, she said.

In addition to what people take from her porch, Baginski said she loads up several hundred pounds of supplies each month and delivers them to MedShare, an aid organization in San Leandro that ships to poor countries.

On Tuesday, Sept. 10, MedShare’s director, Eric Talbert, will talk about his program at the Napa Valley Alliance on Aging’s noon meeting at 3448 Villa Lane in Napa. He will be encouraging a greater countywide effort to reuse and recycle medical supplies and equipment, she said.

Her porch is only a partial answer to medical waste, Baginski said. Vast quantities of items continue to be thrown away by health providers and families, she said.

The need is great, she said. Napa County could be doing more.

Yvonne Baginski, an outspoken advocate for older adults, was recently elected to serve a two-year term in the California Senior Legislature as…