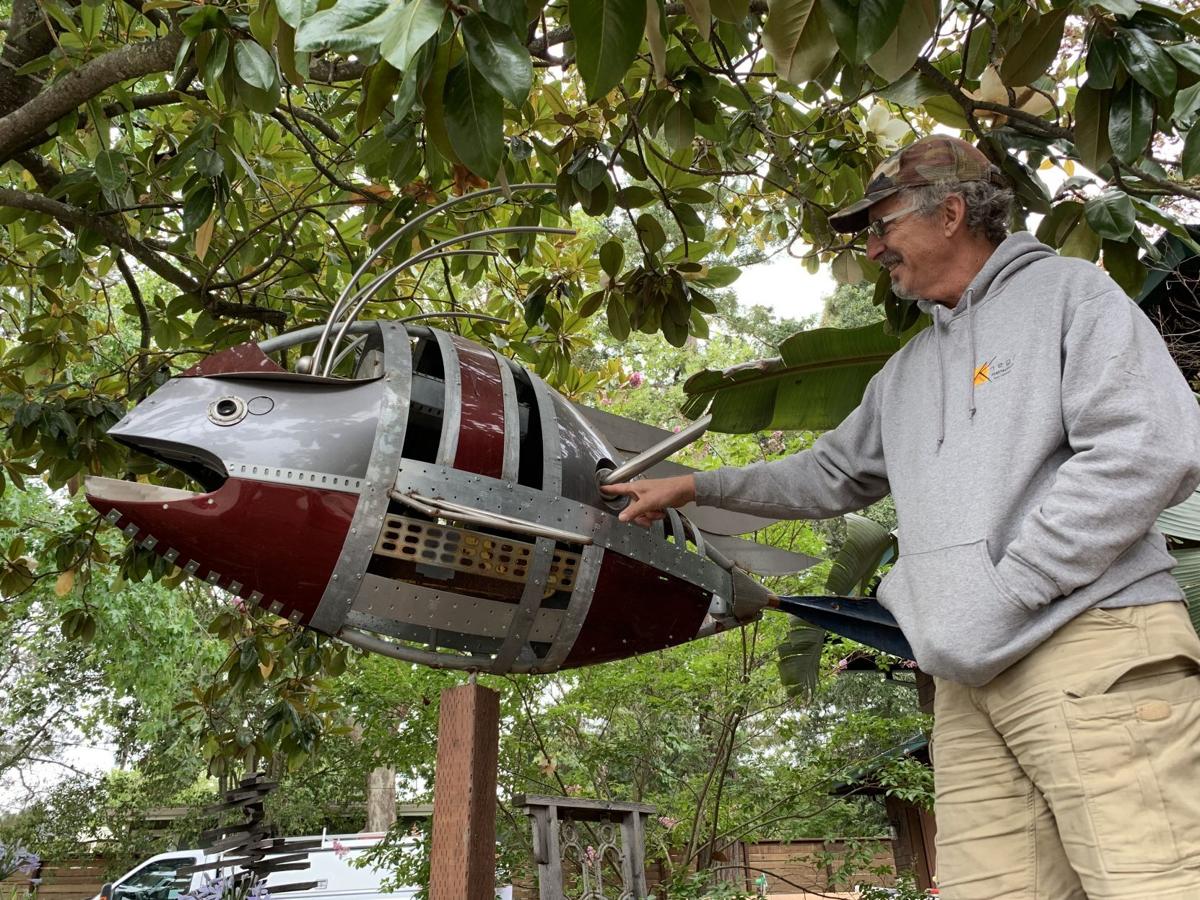 Dan Knego of Napa works in construction, but one of his passions is making art from recycled and reused materials. His home at 3396 Browns Valley Road showcases many of his sculptures. 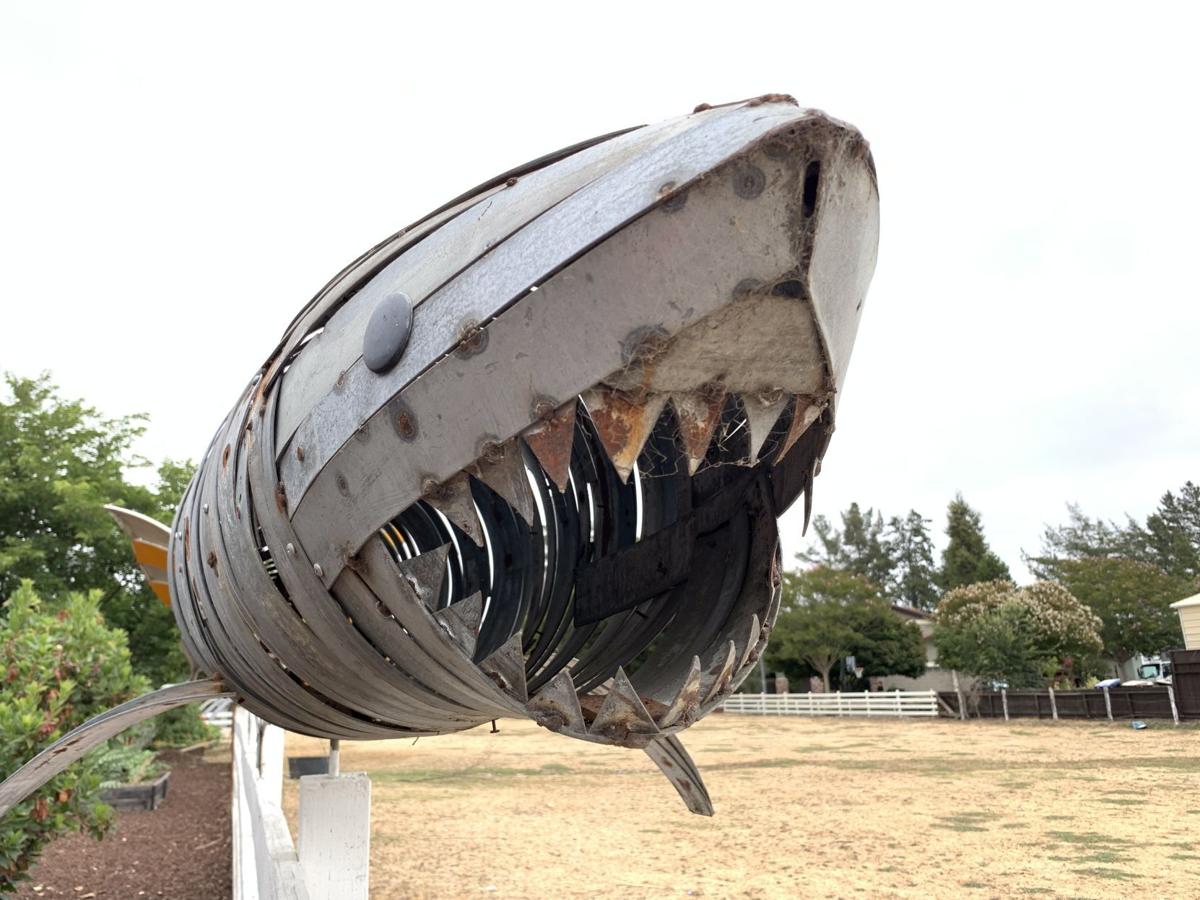 Dan Knego's shark sculpture is on display at his home on Browns Valley Road in Napa. 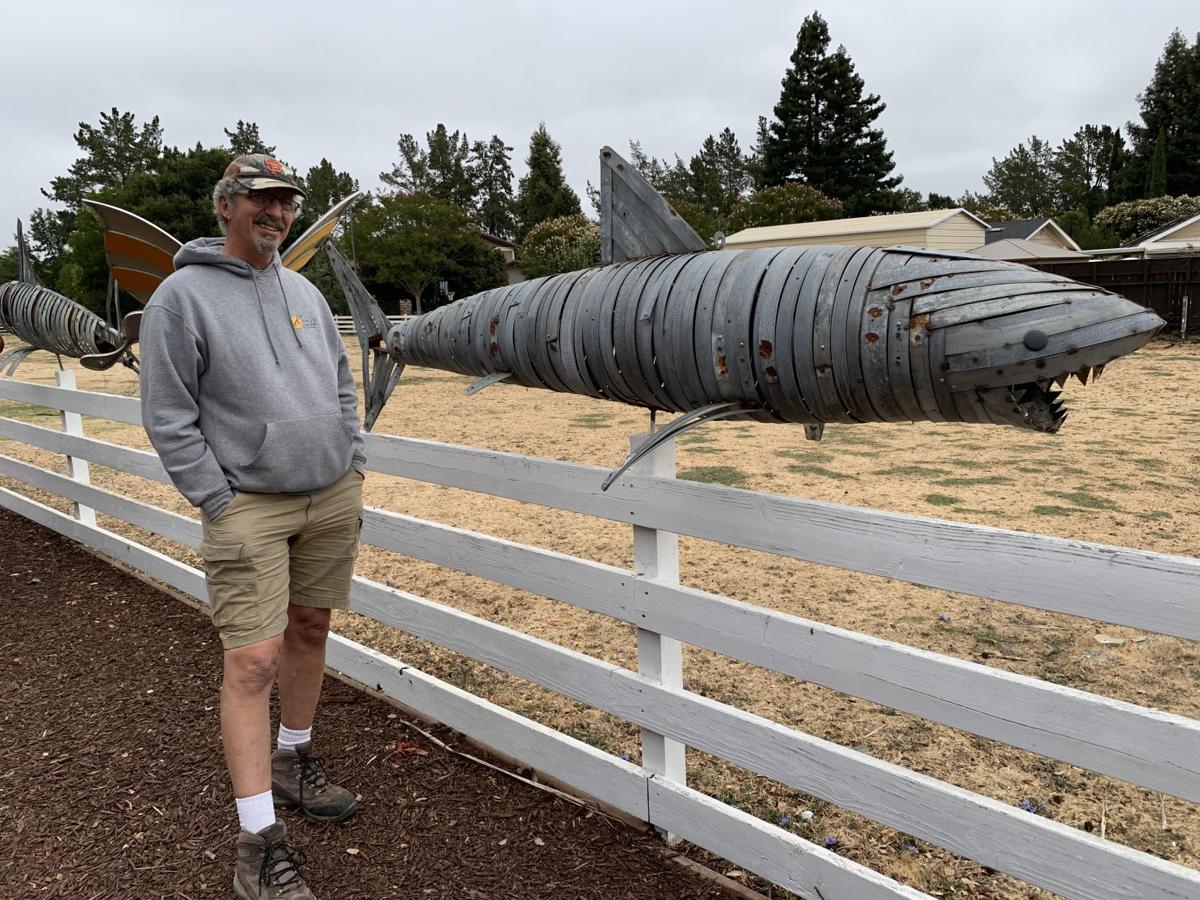 Dan Knego of Napa works in construction but one of his passions is making art from recycled and reused materials. His home at 3396 Browns Valley Road showcases many of his sculptures. 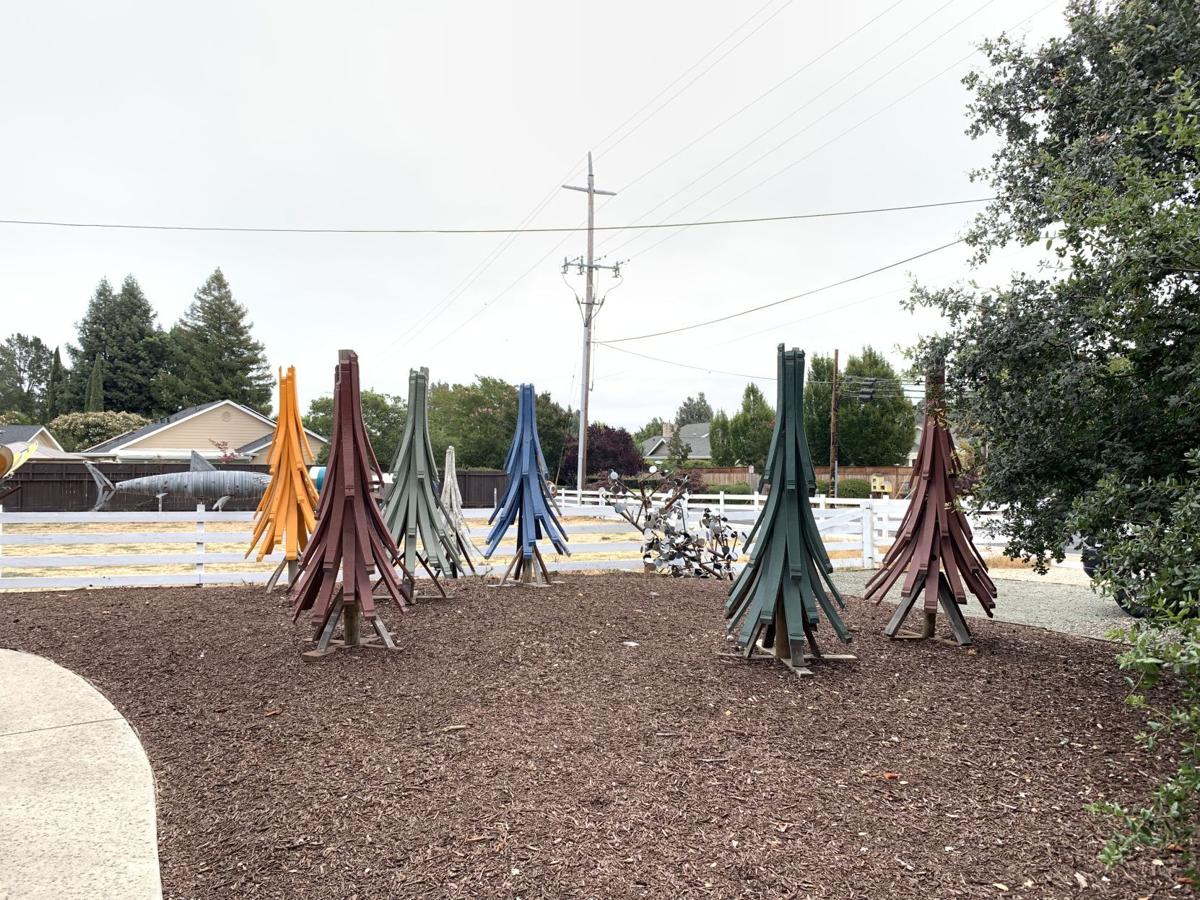 Dan Knego of Napa makes art from recycled materials including these trees made from barrel staves. 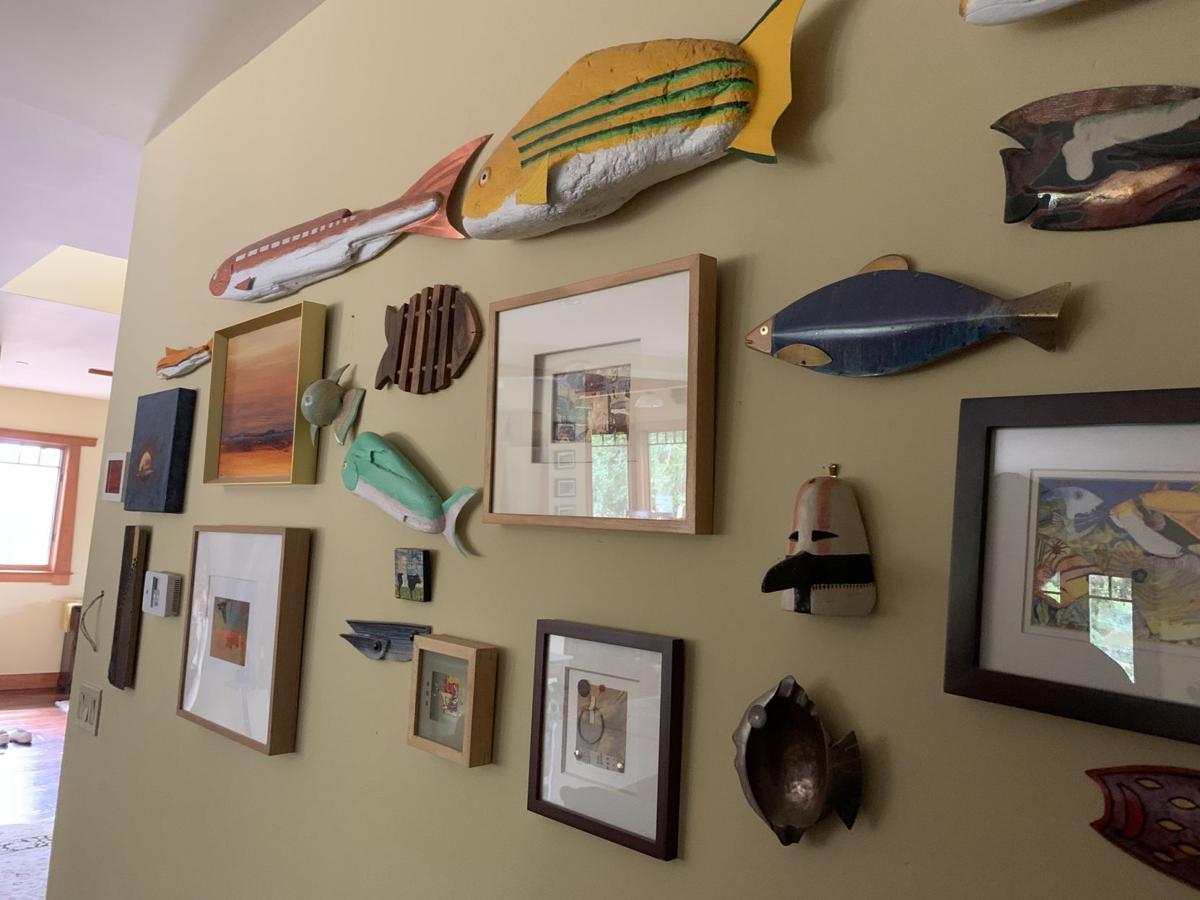 Knego also collects driftwood which he then paints and turns into fish.

The grove of wine barrel stave “trees” in the front yard of 3396 Browns Valley Road in Napa is the first sign that someone creative lives inside.

Not to mention the almost life-sized sharks made from wine barrel rings and the giant fish composed from metal scrap parts, including with razor sharp “teeth.”

The creative “someone” behind these works of art is Dan Knego. For the past 10 to 20 years, he’s been making art from leftover construction materials, driftwood and any other item that strikes his fancy.

“But I wasn’t into college,” said Knego. “I like building things.”

But his artistic instincts never left him.

Some 20 years ago, he went on a trip to New Zealand where he saw the work of a driftwood artist.

“That’s where the fish thing started.”

By “fish thing” Knego means the dozens of driftwood fish he’s designed and painted using carefully selected pieces of driftwood he finds on the beach.

From there, he moved on to building trees from barrel staves. A collection of the wooden trees are placed around his front yard, which can easily be seen by anyone passing on Browns Valley Road.

Knego describes himself as a “recycling artist.” Many of his sculptures are made from recycled, junk or scrap metal parts, he explained.

For example, the leftover barrel hoops were a mystery until he had the vision to use the circles as the body of a great white shark sculpture.

An abandoned floor heater turned into part of a fish. A bumper torn off a car became the body of another fish. And so on.

“I see something, and I get inspired … to create something.”

Knego knows that his art isn’t for everyone.

He actually doesn’t. Construction work keeps him plenty occupied. “I’m hard at it,” he said.

“I gotta make money,” said Knego. “I can’t sit out there and goof off.”

Knego said he likes to find his driftwood on the north coast during camping trips.

“Jenner is the best place,” he said. “I’ll walk down the beach” picking up random pieces of driftwood to consider. Lugging those few pieces back up the hill is always a challenge. But he likes it.

“You’re camping and you gotta do something so, ‘let’s go make some driftwood fish.’ It’s fun,” he said.

For all of his efforts, Knego doesn’t sell very many pieces of his art or sculptures. He once had a booth at the former Chefs Market event. One day a lady stopped by his fence on Browns Valley Road and convinced him to sell her a big sculpture. “I love it,” the lady told Knego. But she didn’t come back.

The truth is that he’s realized that he’s not inspired to make art to “order.” That only leads to artist’s block, said Knego.

Instead, he mostly gives away his artwork to friends and family. Most of his gifts are the smaller driftwood fish. The larger sculptures, “are an acquired taste,” said Knego. “It’s a big commitment.”

Olympians past & present reflect on Tokyo 2021

Art where it matters: Two of Kristina Young’s projects to beautify Napa

Napa artist Kristina Young is using our natural environment and familiar landmarks to bring art to the community.

One of the city's future public artworks may cover the asphalt at Main and Second streets, one of Napa's busiest crossings.

Downtown Calistoga will be welcoming a new glass blowing studio, located in the former All Season’s Bistro space.

Napa artist Darick Robertson has an "in" with superheroes — he's a comic book artist and co-executive producer of "The Boys" on Amazon.

Mark Battuello creates jewelry in his home studio on Ehlers Lane, selling rings and bracelets at Calistoga’s Kokomo Studio and in shops in Santa Rosa.

Dan Knego of Napa works in construction, but one of his passions is making art from recycled and reused materials. His home at 3396 Browns Valley Road showcases many of his sculptures.

Dan Knego's shark sculpture is on display at his home on Browns Valley Road in Napa.

Dan Knego of Napa works in construction but one of his passions is making art from recycled and reused materials. His home at 3396 Browns Valley Road showcases many of his sculptures.

Dan Knego of Napa makes art from recycled materials including these trees made from barrel staves.

Knego also collects driftwood which he then paints and turns into fish.