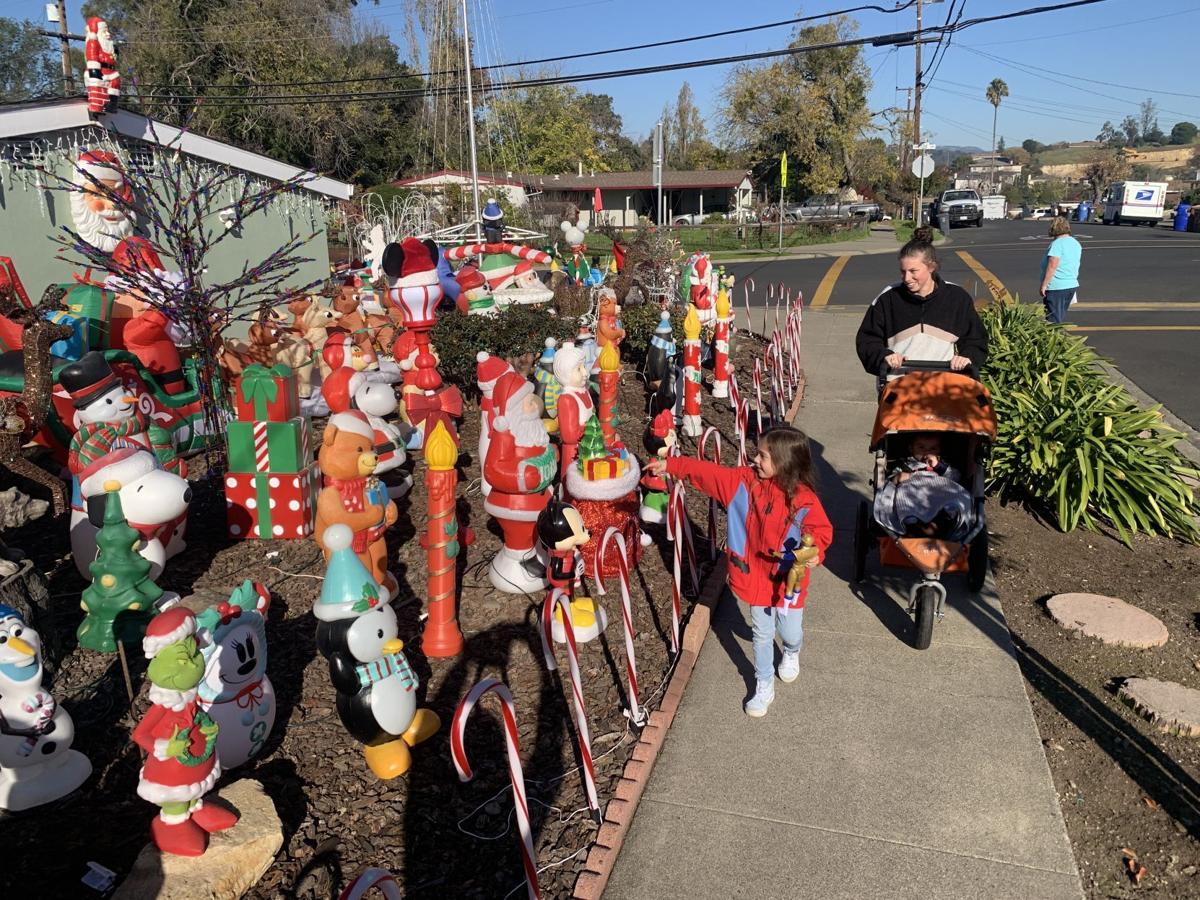 Visitors check out the extensive holiday display at Don and Debbie Nichols' house in east Napa. 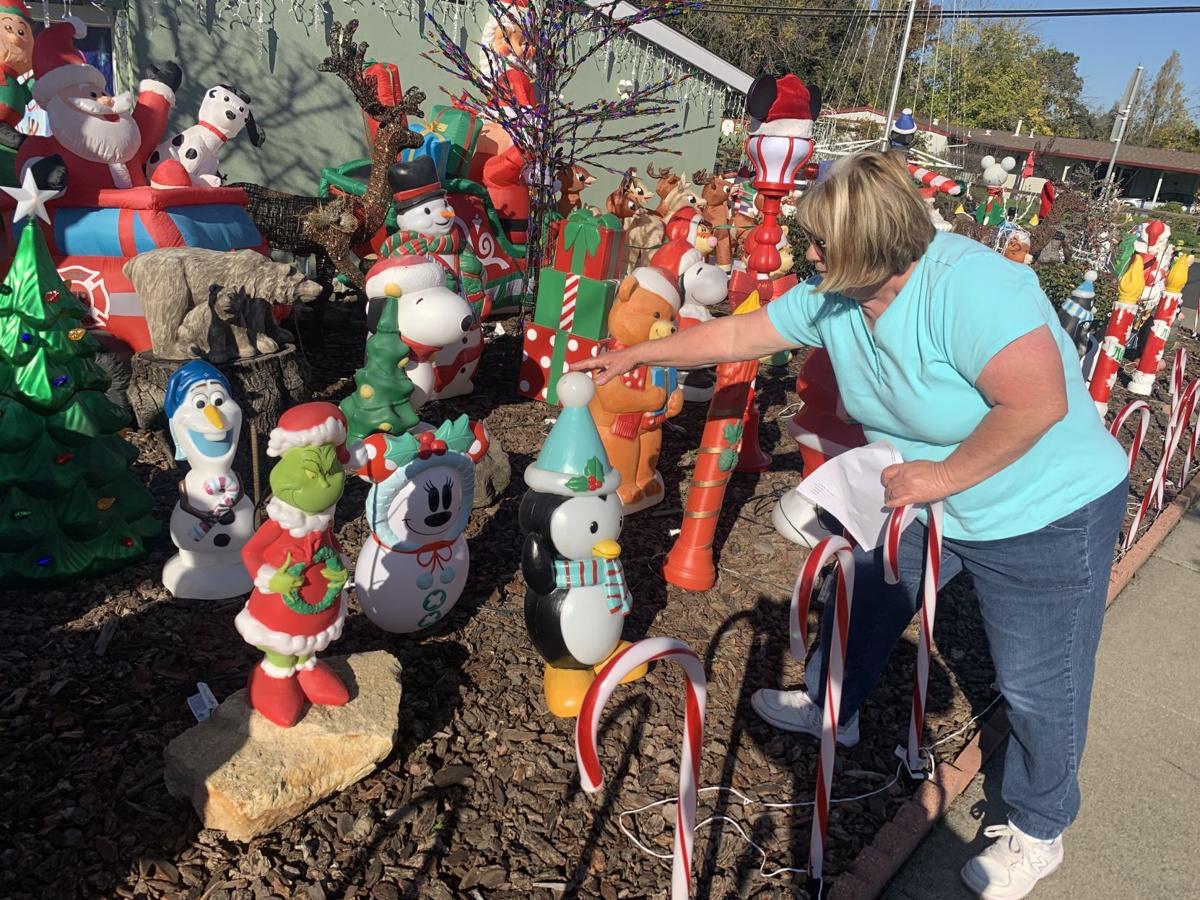 Debbie Nichols and her husband Don have covered almost every square foot of their Napa yard with Christmas blow mold and inflatable decorations. 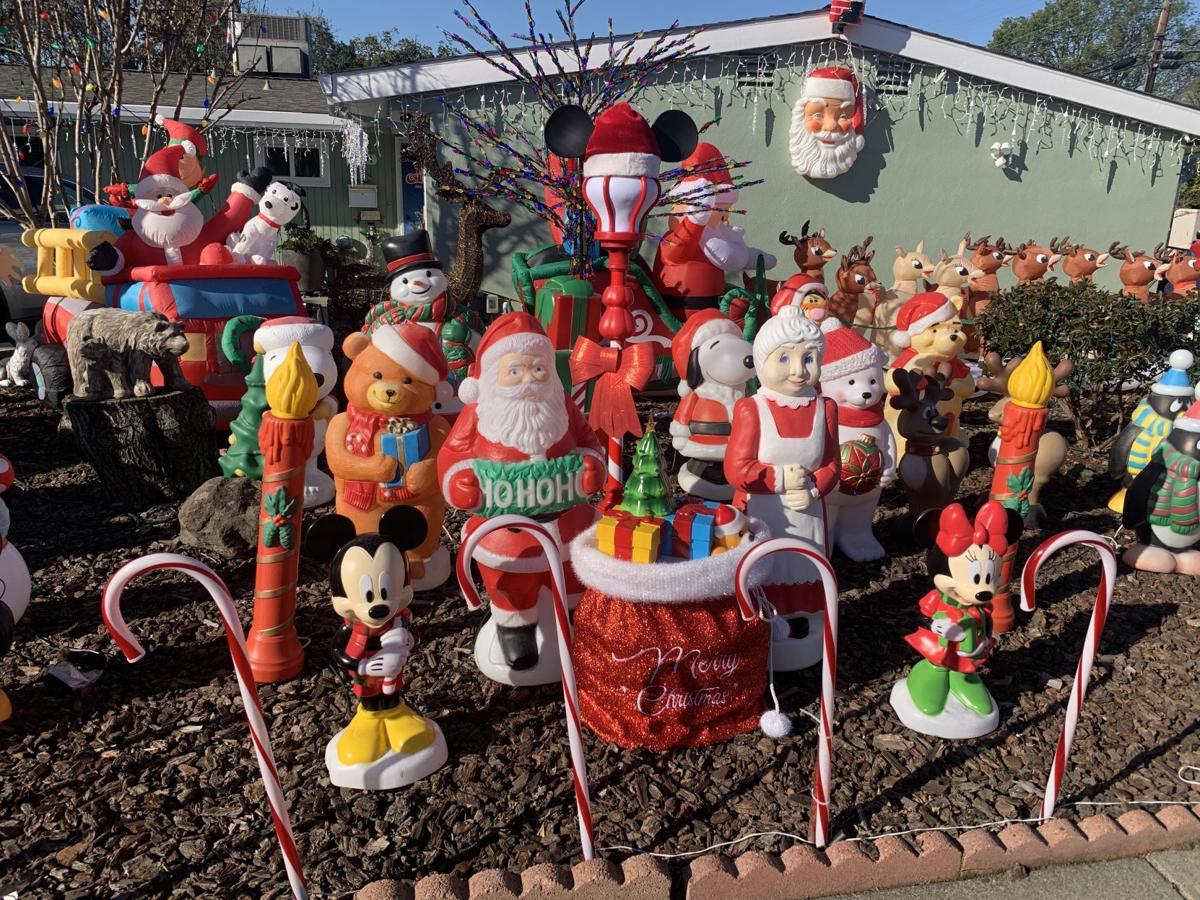 Don and Debbie Nichols spent seven days setting up their yard decorations at their Napa home. 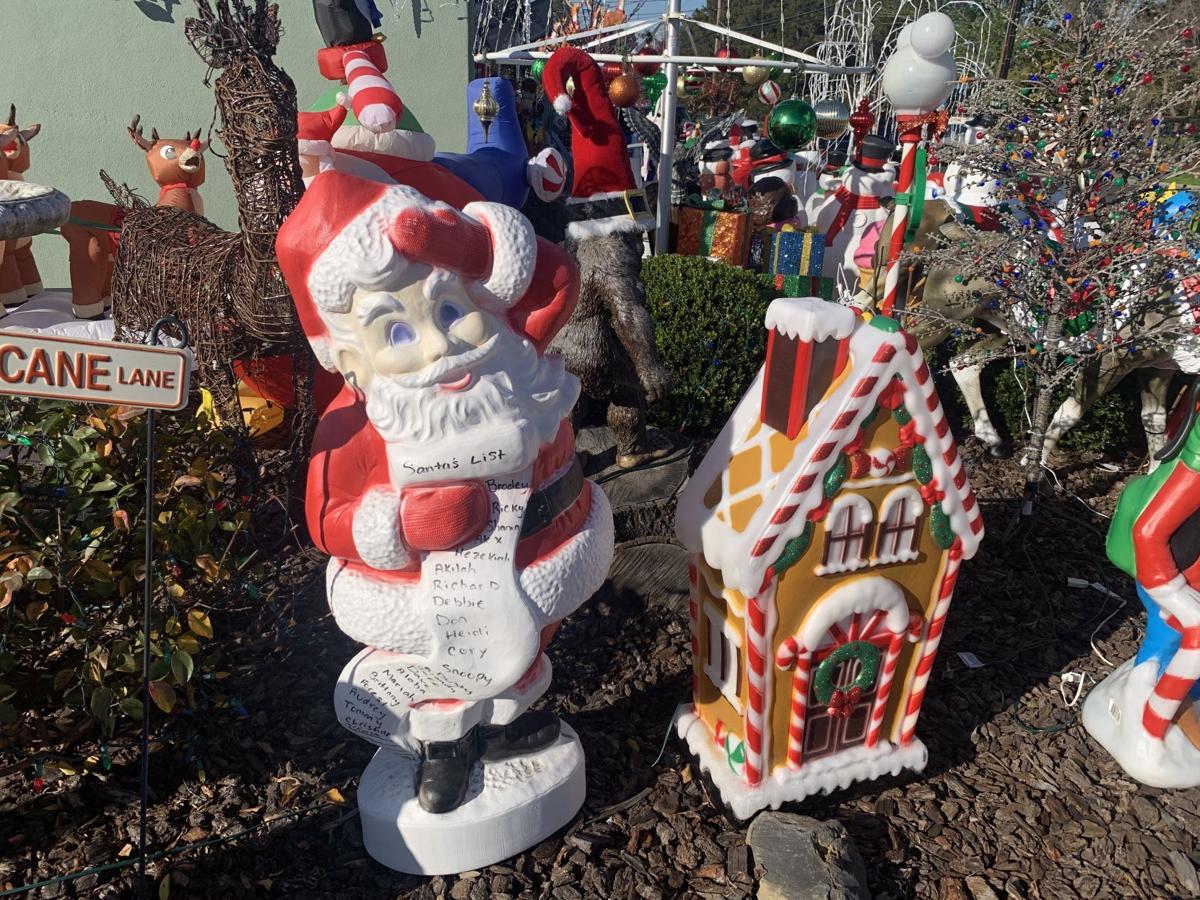 Check out the extensive holiday and Christmas display at Don and Debbie Nichols' house in east Napa.

Don and Debbie Nichols of Napa have created a holiday wonderland at their east Napa home that will surely blow your mind.

They have completely covered the entire front and side of their house with blow mold figures, inflatable Christmas decorations, wooden cutouts, and much, much more.

Most of the statues and inflatables light up and are activated by remote control.

“Don worked his fanny off this year,” said Debbie.

“We enjoy doing it,” she said. “It makes us feel good,” to see people stop and smile at the display. Their house is located at the corner of Shetler Avenue and Russell Street.

Debbie explained that the couple typically decorates for the holiday season, but about five years ago, their blow mold and inflatable habit began to significantly expand.

Connecting with other blow mold collectors, they started noticing many new blow molds (and inflatables) for sale at retailers such as Home Depot and Walmart.

“Before you know it, we had 100 blow molds on our back patio,” she said. And that number keeps rising.

Don, who runs Don Nichols Plumbing, also makes and paints the wooden decorations on display, some of which have moving parts.

“This year is the biggest yet,” she said.

According to goldenglow.org, blow molds are made via a plastic manufacturing process: “A hollow tube is filled with melted plastic, placed into a steel mold, inflated with air, forcing the plastic to the interior surface of a metal mold, the metal mold is opened when cooled, the item is removed and appropriately painted."

The vintage-style decorations are definitely enjoying a surge in popularity.

“They’ve got a character to them,” and a fun nostalgia factor, said Debbie. “Blow molds are what I grew up with,” she explained. “And my husband has always liked the blow ups. I like the mixture of it.”

This year it took about seven days — with the help of their two grandsons — to install the display. “We wanted it up before Thanksgiving,” Debbie said. “Our kids were coming, and the clock was ticking down.”

Both Debbie and Don are longtime Napans, and both attended Napa High. They’ve been married since 1976.

Debbie said their personal favorite is the vintage flying blow mold sled and reindeer (as seen on the Shetler Avenue side of the house). Soaring over the yard, it features fine details and color.

Locals have come to expect the display around the start of each holiday season, said Debbie. Even before it’s installed, “They start showing up before Christmas, and if they see us outside they ask ‘when is it starting?’”

“Every year we have some of the same people come by,” said Debbie. “One guy last year said, ‘You know, my wife has cancer and this puts a smile on her face.’”

Visitors have been respectful, said Debbie. Security cameras and securely staking each piece to the ground seem to have prevented any vandalism or theft.

Debbie said depending on the weather, the elaborate arrangement usually comes down around New Year’s Eve weekend. It’s much faster to dismantle, she said. Everything is stored in two sheds in their backyard.

What about their PG&E bill? Do the blow molds and inflatables cause it to blow up?

See it for yourself

Don and Debbie Nichols' holiday blow mold and inflatable display can be seen at the corner of Russell Avenue and Shelter Street in east Napa.

Opportunities to shop and support local artists abound in the upcoming weekend in Napa Valley.

The Sound of Music in the Valley: Napa High's Holiday Concert returns

A round-up of holiday music in Napa Valley.

Glowing holiday lights, high-energy carols blaring from gaily decorated floats, and a visit from Santa Claus are annual sights that had gone m…

After a one-year hiatus in 2020 due to COVID-19, Napa's annual tree lighting once again drew hundreds of spectators Wednesday night.

Wednesday's tree lighting at Veterans Memorial Park, and Saturday's downtown parade, were canceled in 2020 due to COVID-19 restrictions.

Allen Balik, The Wine Exchange: Sparkling treats for the holidays

If there ever was a “one size fits all” in wine, sparklers may be the answer.

According to several Napa and Solano county area Filipino-American community leaders, Filipino Christmas starts in the fall and stretches through the first of the year.

Visitors check out the extensive holiday display at Don and Debbie Nichols' house in east Napa.

Debbie Nichols and her husband Don have covered almost every square foot of their Napa yard with Christmas blow mold and inflatable decorations.

Don and Debbie Nichols spent seven days setting up their yard decorations at their Napa home.

Check out the extensive holiday and Christmas display at Don and Debbie Nichols' house in east Napa.