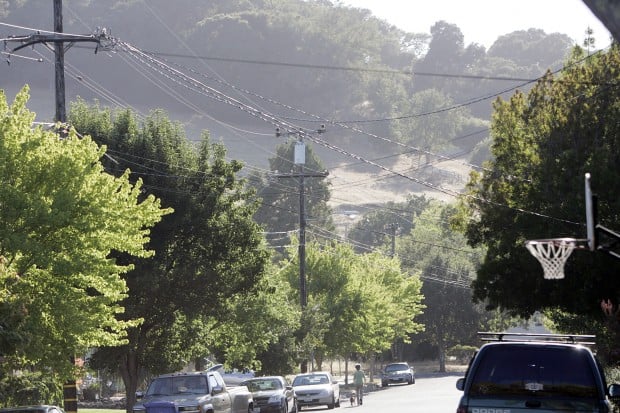 Residents along Casswall Street in west Napa have concerns about a proposed subdivision in the hills above Old Sonoma Road. 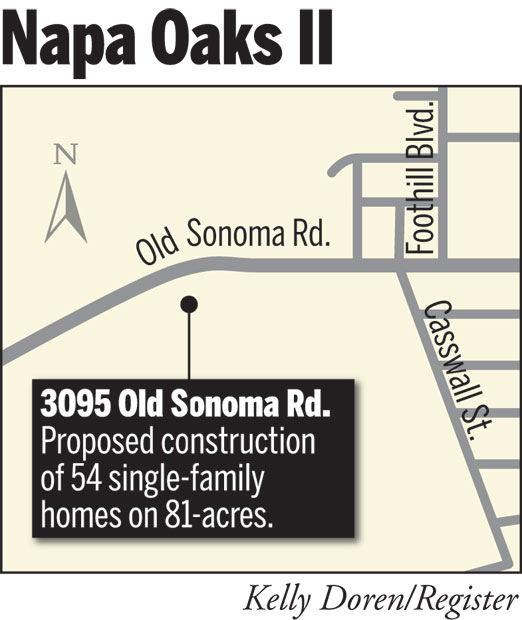 A proposed hillside development in southwest Napa is drawing the ire of neighbors yet again.

About 20 people attended a Tuesday evening meeting to suggest the scope of environmental studies of the proposed Napa Oaks II subdivision south of Old Sonoma Road.

Many said they raised the same concerns in 1997 when the same developer proposed a larger project that was eventually denied.

“I am very upset that this is being brought before us again. I thought we defeated it,” said Diane Pogue, who lives adjacent to the project site at 3095 Old Sonoma Road.

“We have a gorgeous view of a green mountain with lots and lots of oaks on it. We have turkeys, we have cows mooing. It’s being in the city but still having a bit of the country there. I don’t want that taken away from me,” Pogue said.

Davidon Homes wants to subdivide the 81-acre property into 54 lots for single-family homes and four lots containing 46 acres of open space. The 1997 proposal, which was made around the time the city rezoned the property from single-family to agriculture, called for 85 single-family lots.

The developer is asking the city to revert the zoning back to single-family residential so it can build homes that would range in size from 3,888 to 5,061 square feet, according to the city.

Neighbors said while they worry about loss of the tree-covered hillside, they have other concerns they want vetted in the environmental study. Chief among them is the potential for landslides, surface runoff that could cause flooding on their properties and increased traffic.

“We know what’s going to happen if they start moving trees and grading,” Sandra Ruark said. Her father and husband have had to build retaining walls to keep the hill off her property, she said.

Neighbors asked that the study look at the integrity of the hillside, which several said is slowly sliding into their yards.

“Has anybody ever considered what happens if that hill does come down?” Ruark said. “And if that happens, it’s going to be a heck of a lot of lawsuits. So please consider just making it a habitat for animals and keeping it peaceful as it has been.”

Kevin Eberle, a senior planner with the city, said the design and location of the lots would be based on topography so the least amount of grading is required. The property was graded decades ago, he said.

There would be one street into the subdivision, with a second street to be used only by emergency vehicles, Eberle said. The main entrance would be on Old Sonoma Road, near Casswall Street.

Multiple neighbors, most of them living on Casswall, said they will suffer from increased traffic on their streets, as they expect subdivision residents to cut through their neighborhood to get to Highway 29.

Eve Kahn, who lives in Browns Valley, said the property’s zoning was changed not because the city needed another agriculture area but because the property was “not the best buildable site.” She doesn’t believe that has changed, she said.

Under current zoning, only one unit is allowed for every 20 acres.

Kahn said an entrance off Old Sonoma Road could be dangerous. “I come down Old Sonoma Road all the time, and since I’ve heard about this project, I’ve tried to visualize that entrance. And right now it’s pretty blind, there’s a lot of trees there,” she said. “In the winter, it can get icy.”

Pogue and others said they fear what will happen to their homes if there is a significant rain storm. They shared anecdotes of past floods that ripped through their streets and said if the hillside is developed, there will be less permeable ground for water to soak into and it will eventually end up on their streets.

Neighbor Karen Scriven said she hates to sound like someone with a “Not In My Backyard” attitude, but she believes the potential loss of open space on Napa’s western border is an issue that affects many.

The city of Napa will accept comments on what should be explored in the environmental impact report. The report will study any potential impacts and suggest mitigation measures in cases where the project would be harmful.

Comments will be accepted through Nov. 29. They should be provided to:

A new state rule is keeping Napa County in the orange on the COVID-19 rating scale as long as hospitalizations remain low.

Two Napa police officers were treated at Queen of the Valley Hospital for injuries suffered during the incident, police said.

None of the vaccinated persons who tested positive fell ill or displayed COVID-19 symptoms, something Napa County officials say underscores the importance of vaccines.

Both parties had criminal histories that prohibited them from possessing firearms, police said.

The proposal will go before NVUSD board members Thursday evening, with a final vote expected April 22.

Temporary dining and recreation uses are proposed for the former Copia south garden space, to be known as Oxbow Yard.

Victorian home next to Napa's Fuller Park to get new owner

Unlike some other recent Victorian sales, this home's four rental units may be retained.

Residents along Casswall Street in west Napa have concerns about a proposed subdivision in the hills above Old Sonoma Road.