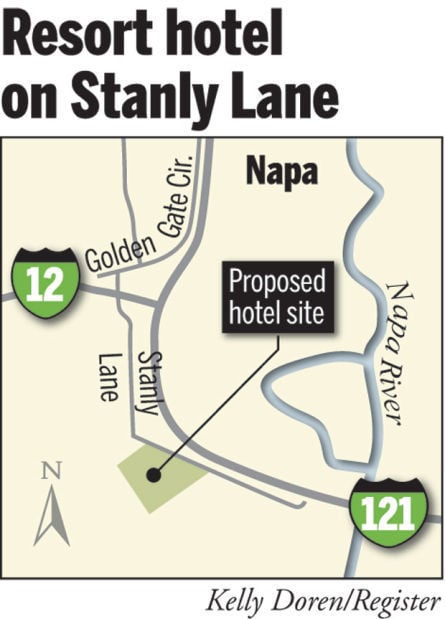 The stalled 150-room Stanly Ranch resort project has a new investor that recently contributed $45 million to the long-promised development, suggesting that construction is on the horizon.

A deed recording a $45 million transaction at the south Napa parcel was filed on June 29 in the Napa County Recorder office. The project ownership, formerly called Stanly Ranch Resort Napa LLC. is now known as SRGA LP, according to the deed.

The investment “is a positive thing for the project,” said Chris Crosby, a project manager for the resort, which is located on Stanly Cross Road just south of the Highway 12/29/121 intersection.

Crosby wouldn’t comment further on the new investor, but he said the project is going forward.

“I believe the investors wanted assurance that the city still considered the entitlements active before they invested,” said Allen.

“We assured them the entitlements are still active since the approved Stanly Ranch Resort Master Plan does not have an expiration date,” Allen said.

According to Allen, “They indicated they would be submitting new building permits soon.”

The new partner is likely either someone who perhaps has development experience and has the ability to get the project built or a silent investor who wants to be involved in Napa Valley hospitality, said Reay.

Regardless, this influx of funds means action, he said. The project “is not going to sit dormant, that’s for sure. That money has come in to move the development forward,” said Reay.

In 2016, the Napa Planning Commission approved a 150-room hotel at the site.

At that time, the Stanly Ranch development was estimated to cost $250 million to $275 million. City officials have estimated the resort will generate $4.4 million in tax revenue in its first year, including property and hotel room taxes.

The currently approved project includes the hotel and 25 shared ownership homes that people occupy at different times of the year, 70 fully owned homes and a 40,000-square-foot winery.

The developers had originally agreed to pay $1.4 million into a city fund for development of affordable housing. After being sued by Latinos Unidos del Valle de Napa y Solano, a housing advocacy group, the builders agreed to pay an additional $3 million.

The Stanly Ranch hotel, covering 93 acres, will spread its rooms across dozens of small, one-story structures made from metal, wood and stone in an effort to create a peaceful, farm-like atmosphere.

A core of six larger buildings will hold a restaurant, cafe, spa, banquet hall and conference center, and cycling and pedestrian trails would crisscross the resort grounds and line Stanly Ranch’s north and west sides.

No significant changes have been made to the project, said Allen.

Six years after Napa first approved plans for a resort and housing development for the rural Stanly Ranch area, work on its first element – a …

A Carneros site, located inside the city of Napa, will become home to a stylish new winery.

Amid rolling vineyards, a new luxury resort is rising in south Napa

Hong Kong to euthanize at least 2,000 animals after 11 test positive for COVID-19